Oriented Strand Board as a Building Material

Since the mid-1980s, oriented strand board (OSB) has been one of the most commonly used engineered wood-based panels for structural construction in residential sectors in North America. OSB was first produced in Canada in 1964, but it did not find its solid status in the market until the mid-1980s.

The number of OSB mills increased by more than 50 percent from 1990 to 1997. Today, total OSB production in North America is approximately 706 million ft3 (20 million m3), and there are about 20 companies that manufacture OSB in the United States, Canada and Europe.

Forest products companies are utilizing raw materials more efficiently with better technologies in more environmentally friendly ways. With this approach to managing forests, engineered wood composite products such as OSB have gained a significant role in the world market. A decline in plywood manufacturing in many countries, due to limited large log supplies and environmental concerns, will increase production of OSB in the future. OSB production is expected to continue to increase in North America and Europe and have the main share in the structural wood composite market.

This fact sheet summarizes basic manufacturing steps of OSB and some of its properties as a building material.

OSB is manufactured from fast-growing, small trees. West Coast inland mills producing OSB primarily use lodgepole pine logs averaging 10 to 12 inches in diameter at the breast height (DBH). Mills in the South use pine plantation thinning, Southern Pine and soft hardwoods species such as aspen with an average DBH of 8 inches.

Short segments of the logs are washed and debarked prior to strand production by using disk or ring type flakers. Generally, strand size is approximately 0.5 inch by 3 inches by 0.02 inch depending on the type of process and raw material. Size of the strands can be modified based on target specifications of the panel.

Since the moisture content of the strands ranges from 40 to 75 percent, they are dried to 5 to 10 percent moisture in large, rotating single-pass or triple-pass dryers with an inlet temperature of as high as 1,250oF.

Dried strands are classified into two sections using various sizes of screen. Larger strands are used for the face layers while the smaller strands are laid out in the core layer. Face and core layer strands are mixed separately with an exterior binder in a drum-type rotating blender. Depending on the process, a certain percentage of wax and other chemicals also can be applied during the blending process. 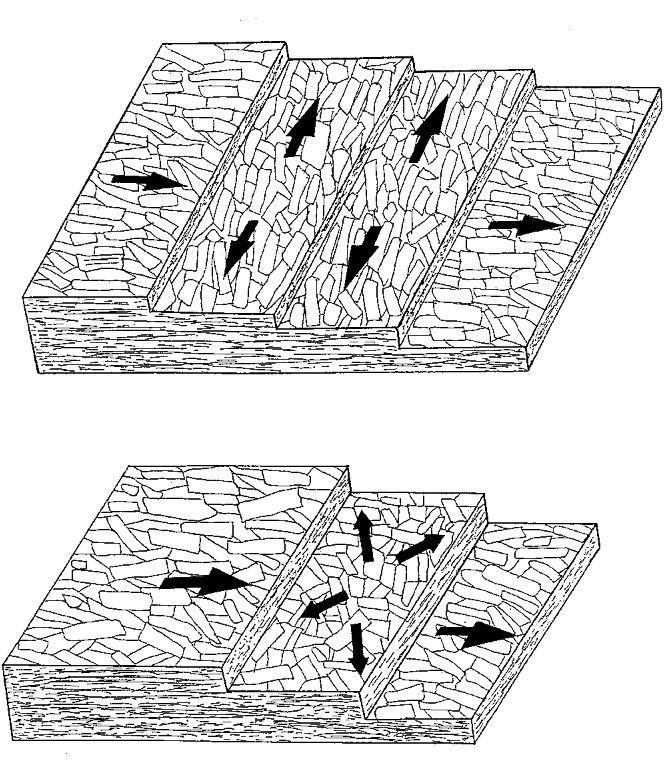 Figure 1. A schematic illustrating strand orientation of a typical OSB.

In OSB manufacturing, phenol formaldehyde (PF) and diphenylmethane diisocyanate (MDI) are two types of water-resistant resin commonly used as binder. Strands coated with one of these resins are ready for mat formation, which is the most important process determining properties of the panel.

A simple design of spinning disks is used in the forming of the strands. Face and core layers of the mat are oriented opposite each other and sequentially dropped on the conveyor belt. The mat thickness depends on the final thickness of the pressed panel and its density.

In a general OSB plant, forming lines are about 6- to 8-feet wide. The mat is carried toward the press and a cross saw trims the mat to the desired panel length. Individual mats are loaded into a multi-opening press having 10 to 20 openings depending on the plant’s capacity.

A combination of pressure and temperature is applied to cure the resin and give stiffness to the panel. Typical press parameters include a temperature of 400 to 425oF and a pressure of 650 to 800 psi for approximately 4 to 6 minutes. Pressed panels are removed from the press line and conditioned on a rotating cooler prior to cutting them into desired dimensions.

The panels are later sanded to improve their surface roughness. Certain processes, such as profiling with tongue and groove edges or the raised screen pattern on one face to eliminate slipping in roof application, can also be applied to the surface of the panels for special applications. 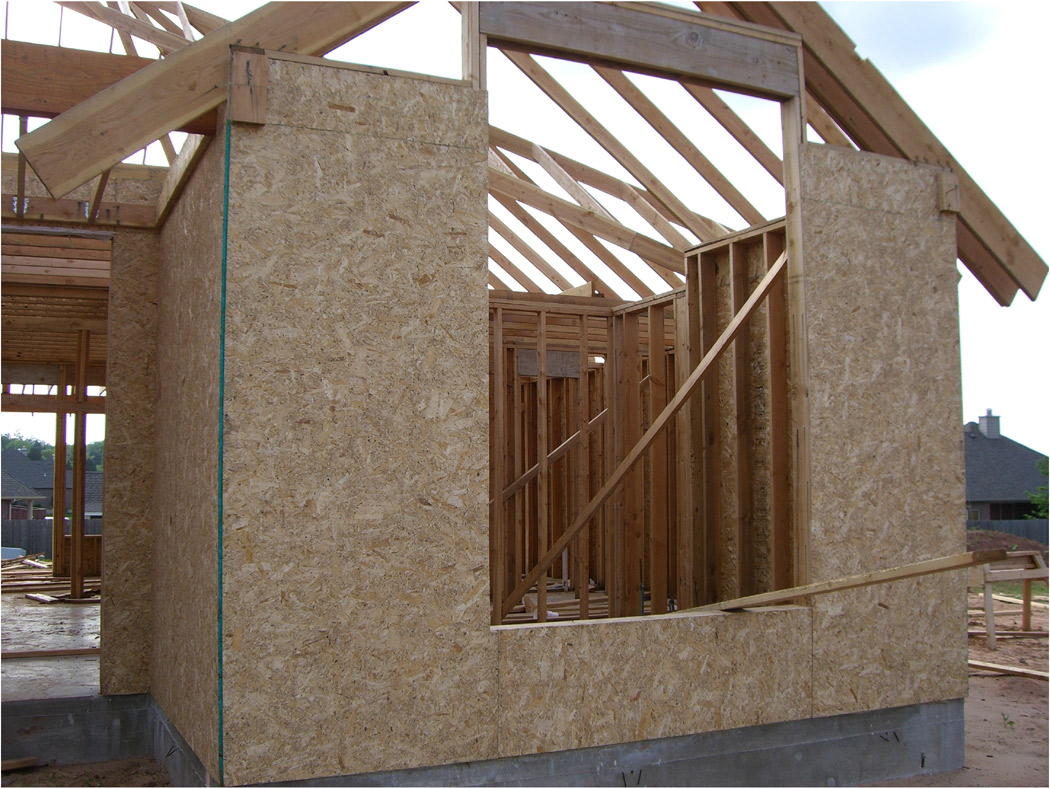 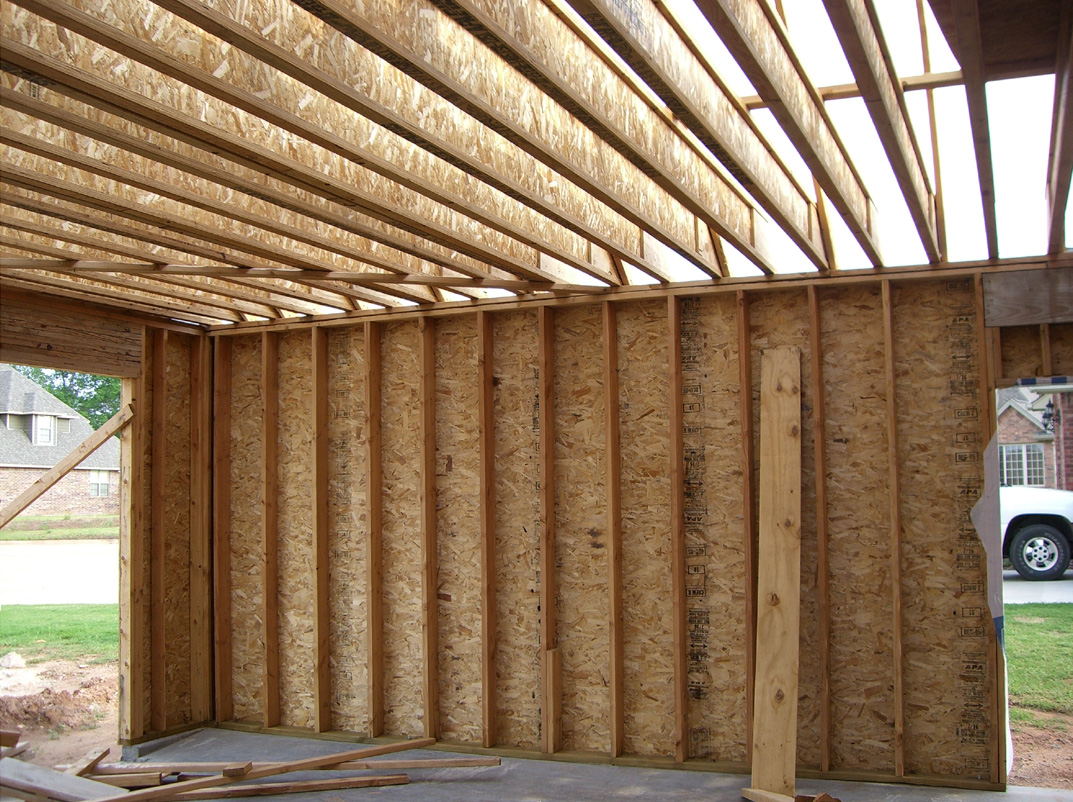 Figure 3. Applications of OSB as siding and I-joist.

Similar to other wood products, OSB also is prone to decay when conditions are optimum for biological microorganisms, such as fungus. Zinc borate and oxine copper are sprayed as fungicides to enhance resistance of OSB to biological deterioration. In general, OSB is not used for applications where there is direct contact with a moisture source, such as soil. However, brief periods of exposure to rain during the installation of OSB in residential construction should not cause any significant problems in terms of its dimensional stability.

It is recommended to leave a 1/8-inch gap between panels during installation to prevent possible buckling due to expansion. Most OSB panels also are treated with a sealant on the panel edges to reduce moisture penetration during the service life.

Some of the advantages of OSB over other wood based products are as follows:

Table 1 displays some of the physical and mechanical properties of sheathing grade OSB as compared to plywood.

Table 1. Some of the physical and mechanical properties of a typical OSB.