There are many properties that can potentially influence soil quality, but none garners more attention than soil organic matter (SOM). This attention is merited due to the number of vital soil functions soil organic matter directly influences. Several land management practices can greatly influence SOM.  In a no-till system, surface residues protect the soil surface from the detrimental impacts of wind and water erosion. More importantly, increased organic materials in the soil provide an energy source for biological activity, a nutrient source for plants and microbes and serve as a structural component that improves soil permeability.

What is Organic Matter?

Soil organic matter is composed of plant and animal tissue within the soil at different stages of decomposition. Soil organic matter can be separated into three basic components to provide a proper discussion of its benefits and management strategies in a no-till system. These three components are surface residues, underground residues and humus. While humus is most commonly discussed portion of SOM, it is the final product of residue breakdown and directly tied to the quality and composite of the surface and underground residues. Therefore, each must be discussed to properly understand the role SOM plays in a soil system. Surface residues are above-ground plant matter, which can be anchored by means of root mass or simply laying on the soil surface.  Underground residues are partially decomposed organic material located beneath the soil surface, such as roots or residues buried by animals. Humus is the stable fraction of organic matter that has undergone the process of humification. In this process, microbes decompose organic residues into dark-colored complex and stable structures.

Surface residues help combat erosion by protecting the soil surface from water and wind, while simultaneously decreasing surface evaporation and decreasing the potential of surface crusts. Prevention of crusting increases infiltration and can improve stand establishment. Surface residues reduce evaporative water loss, which in turn, may increase water availability and potentially increase crop performance.  However, different residues will provide different amounts of protection of the soil surface (Figure 1). When there are equal amounts of residue, crops like wheat and oats will cover more of the soil surface than a crop like sunflower, due to the fact that sunflower stalks are larger and therefore do not cover as much of the soil surface per pound of residue.

The underground residues are beneficial to the structure of a soil. They directly influence soil structure by reducing compaction under traffic. In a sense, the network of undisturbed roots can serve as a skeleton for the near surface soil. Living roots are more effective at this function. Therefore, moderate grazing management that allows for a healthy root system will reduce the negative effects of compaction, compared to heavy grazing, which can reduce root growth in addition to surface residues. Underground residues also supply an energy source for microbes and invertebrates. The decomposition of both above- and underground residue results in the release of proteins and carbohydrates that serve to bind soil particles and improve aggregation.  Better soil aggregation translates to an improved infiltration of water and ease of root growth. Crop residues provide food for macro-invertebrates, such as earth worms, which in turn form biopores that lead to further improvement in a soils permeability.

Roots tend to contribute a greater percentage of their weight to the formation of humus than above-ground residues. This is because roots contain high percentage of lignin, which slows the degradation process.  For example, Magdoff and Van Es (2009) found that after one year of oat production, 33 percent of surface organic matter (residue) was present compared to 42 percent of root organic matter. The decomposition of organic residue also releases and/or immobilizes plant nutrients, in particular nitrogen. Immobilization of applied nitrogen can be detrimental to the current crop; however, this nitrogen can be released through mineralization and utilized later in the growing season or by the following crop.

Humus provides several beneficial properties to the soil system. Increasing humus decreases crusting and clodding, which in turn, improves drainage and water infiltration, increases water- and nutrient-holding capacity and reduces erosion.  These benefits are achieved because clay particles react with humus. The surface charge of humus, like those of clay, can attract and hold nutrient ions and water molecules. This allows clay and humus to act as a bridge between larger soil particles, such as sand and silt.  This connection is imperative to the formation of a well-structured soil. 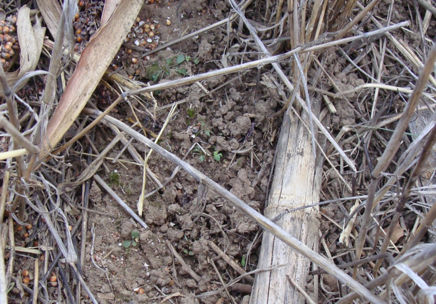 Figure 2. Worm casts on the surface of a 10-year-old no-till soil. Surface residues provide food for earthworms as well as protection of pores created by their activity.

Soils in Oklahoma are very diverse due to rainfall and temperature gradients, as well as the wide range of parent materials from which they are formed. Therefore, the amount of soil organic matter found in Oklahoma soils can vary greatly. The soil organic matter content of historically cultivated cropland soils in Oklahoma ranges from 3.5 percent in the silty clay soils of northeast Oklahoma near Miami, to as little as 0.5 percent in the loamy sand soils in southwest Oklahoma near Fort Cobb.

Soil texture also directly influences the amount of soil organic matter contained within a soil system. The rate of decomposition is greatly influenced by available oxygen levels. Coarse-textured soils (sandy soils) are more aerated and will have less organic matter due to the presence of oxygen, resulting in rapid decomposition.  Sandy soils also are generally less productive, resulting in lower crop residue input into the soil. In contrast, fine-textured soils will contain more soil organic matter as they are generally more productive, therefore more residues are created. Aeration is also lower, particularly in soils containing high levels of clay, slowing the decay of residues. Lastly, soil organic matter can form complexes with clay particles, which decrease its susceptibility to microbial decomposition.

Intensifying the crop rotation will generally increase below- and above-ground residue additions into the soil system. The inclusion of cover crops into the crop rotation can be used to increase residue as well. Be mindful that crop type is an important consideration for residue management.

Table 1 provides estimates of under- and above-ground residue for crops commonly grown in Oklahoma. Crop type influences the distribution of above- and underground residues. For example, a 120-bushel corn crop will produce more above-ground residue compared to a 30-bushel wheat crop or 36-bushel canola crop. However, on a per-pound-of-yield-produced basis, wheat and canola produce approximately two times the above-ground biomass of corn. In addition, canola will produce 1 pound of root biomass in the top 4 inches of soil for every 1 pound of grain, in contrast to corn, which produces only 0.2 pound of root mass per 1 pound of grain yield. Therefore, although canola has much lower surface residue, the underground residue is nearly double that of corn, which may contribute to the observations of improved performance of crops following canola.

The carbon:nitrogen ratio also plays an important role in impacting the resilience of residues to decomposition, the higher the ratio, the more resistant that residue is to being broken down by soil microbes. Soybeans have a low carbon:nitrogen ratio (20:1) and will break down faster compared to residues of other crops, such as wheat (80:1).

The structural characteristics of surface residues also are important in determining decomposition rates. For example, residues that are lying on the ground will tend to decompose quicker than upright residues because they are in direct contact with the soil surface. Minimizing traffic on fields, particularly no-till fields, as well as increasing the harvest height will help to slow decomposition and allow for greater development of soil organic matter.

No-till production systems can be successfully grazed, in fact, studies in the southeast U.S. (Franzluebbers and Stuedemann, 2006) have shown that moderate to light grazing of cover crops can increase microbial activity. However, caution should be taken, especially in graze-out situations, to ensure sufficient residues remain to cover the soil surface. No studies have been conducted to determine the specific amount of residue needed after graze-out, but a good rule of thumb would be to leave sufficient residue to cover 80 percent of the soil surface. This amount of soil coverage should prevent crusting and allow for water infiltration and the alleviation of compaction after cattle are removed. If graze-out results in limited residue, surface drying will be more rapid, making the planting window narrower after rain events, especially in summer months. This, combined with increased likelihood of compaction makes it is very important to monitor grazing in no-till systems to maintain surface residue.

Average yields are the Oklahoma 10-year (2001-2010) average yields reported by the National Ag Statistics Service except for canola and sunflower, which are from 2009-2010.

Although there are a number of ways to manage organic matter and crop residues, producers must not forget to look at the big picture. Continuous no-till, along with intensified crop rotations that minimize fallow periods, will optimize the accumulation and maintenance of organic matter. Of course, this interest must be weighed against forage needs and crop water availability. It is clear the same practices cannot be used for every production system. Therefore, it is imperative to understand how these practices interact to improve soil function and productivity. The primary goal of a no-till production system should be to improve organic matter and soil health, while maintaining or improving profitability. Producers should examine their needs and the cost/benefits of each management strategy. Every situation is different and must be treated accordingly.

Franzluebbers A. J., and J. A  Stuedemann . 2006. Soil physical and biological responses to cattle grazing of cover crops. p. 117-123. In Sustainability – its Impact of Soil Management and Environment: International conference proceedings. – Kiel, Germany, 2006.

Soil and Water Conservation and