Optimum Planting Depth for Uniform Germination and Emergence of Corn

Uniform germination and emergence of corn plants is important for optimizing corn yields. Planting depth, soil moisture and soil temperature should be carefully considered before deciding on the depth of corn seed in soil. Planting conditions/depth has direct impact on seed-to-soil contact as well as seeds’ access to adequate moisture and temperature. Planting too shallow may result in poor germination due to low soil moisture retention near the soil surface or seed injury due to insects or disease. Similarly, if placement is too deep, seed may have delayed germination due to lower soil temperatures or result in poor germination or seed injury.

Besides germination, corn seed placement impacts root development and consequent growth of the corn plant. Corn plants produce two types of roots, primary and secondary. Primary roots grow from the seed itself and help seedlings establish and survive until secondary roots develop. These roots support plant nutrition for two to three weeks after germination. Following this time, the secondary roots start forming from nodes of the plant. These nodes are located above the crown region of the plant that do not undergo elongation. Secondary roots emerging from these nodes are called nodal roots. Secondary roots are responsible for absorption of plant nutrition for the rest of plants’ life. Nodal roots generally exist below the soil surface. Any roots growing from nodes above the soil surface are called brace roots. These roots play an important role in anchoring the plant and exploration of nutrients and moisture in shallow soil layers.

Shallow placement of seed may result in exposure of the crown region of the plant, thereby the nodal roots, to warm temperatures. This exposure leads to damage or drying of the nodal roots. In cases of deeper placement, the seed may be subjected to low soil temperature but adequate moisture. In these conditions, the seed absorbs moisture but does not germinate, making it susceptible to fungal diseases. If the seed does survive, its germination may be delayed until the soil temperature reaches optimum levels. Plants emerging after delayed germination often lag behind the early maturing plants in terms of growth stage. These plants struggle to compete for light, nutrients and moisture. Delayed emergence of silk in late-emerging plants may also result in missing the peak pollination period, causing poor kernel production or no kernel production at all.

A study of the impact of planting depth of corn seed was conducted at the Oklahoma Panhandle Research and Extension Center (OPREC), Oklahoma State University, Goodwell, Oklahoma from 2015 to 2018. Seeds were planted at 1.5-inch and 2.5-inch depths in a strip tillage system at a population of 32,500 seeds per acre. The crop was managed for high yield with standard nutrient and irrigation management.

Each year, corn was planted during the second week of May. Germination was similar at about 85 percent for both planting depths. Shallow-planted seeds are more likely to produce stunted plants with poor root development in comparison to deeper planted seeds (Figure 1). Consequently, the yield of the crop planted at a shallower depth was consistently lower during all years of study (Figure 2). Corn planted at 2.5 inches yielded 15 bushels, 5 bushels, 5 bushels and 8 bushels higher than those planted at 1.5 inches in 2015, 2016, 2017 and 2018, respectively. Additionally, different hybrids were tested each year. Therefore, these results show that yield increases for corn planted at 2.5 inches vs. 1.5 inches, irrespective of corn hybrid. 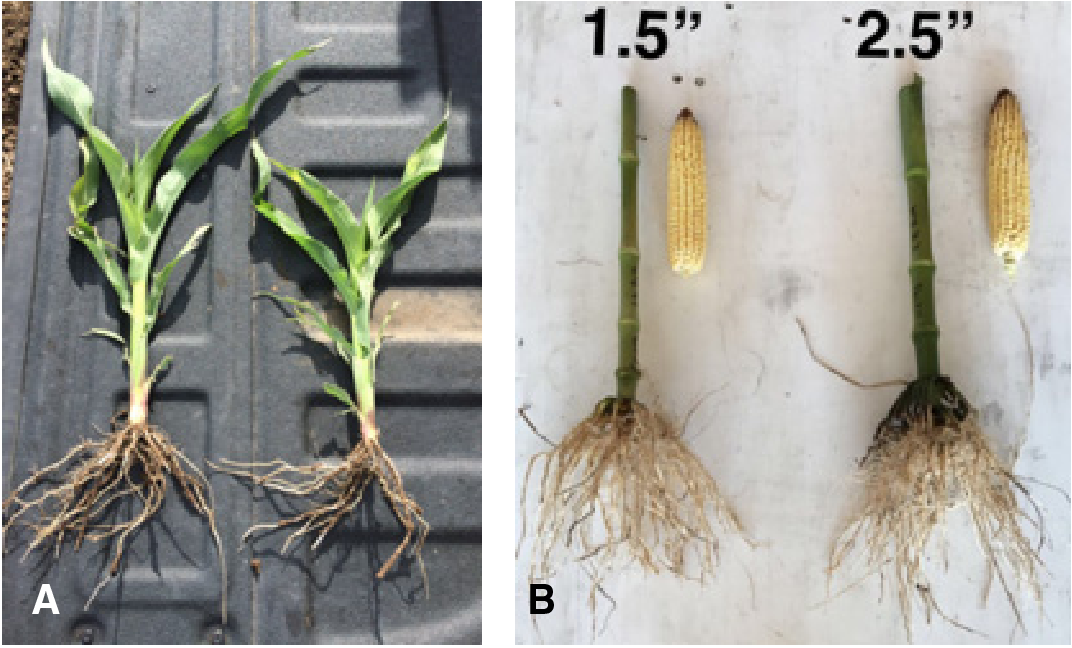 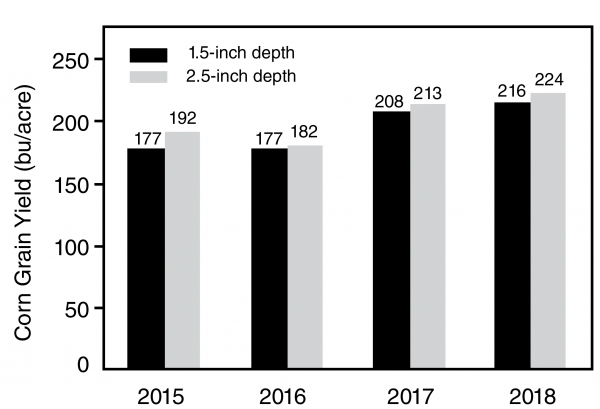 Soil temperature must be considered carefully before determining optimal planting depth. Corn requires a temperature of about 55 to 60 F for successful germination. In our study, the crop was planted once the soil temperature was above 55 F at both depths. Further, crop residue may result in low soil temperatures or uneven distribution of the previous crop’s residue may introduce uneven soil moisture or temperature conditions. A study conducted by Cornell University evaluated different corn planting depths at different dates. The results from this study indicated that regardless of the planting depth, time taken from planting to emergence was highest (26 to 28 days) when the crop was planted during cooler conditions, early in the season (2nd week of April). The shallow (1 inch) planted crop emerged in 26 days, while the deep (3 inches) planted crop emerged in 30 days. However, the emergence time declined as the weather warmed and emergence time was the same during the May planting dates regardless of depth. Earlier planting dates (April) at shallower depths resulted in a greater final plant stand than the plant stands in late planted dates due to higher than optimum soil temperature at shallower depth for late planting dates. In contrast, late (May) planted crop resulted in a greater stand at deeper planting depths than early planted dates.

While these data show benefits of planting corn seed at 2.5-inch depth, the following points should be considered before determining planting depth:

Cox, B. 2014. How does corn planting depth affect stand establishment? Available at: http://blogs.cornell.edu/whatscroppingup/2014/07/25/how-does-corn-planting-depth-affect-stand-establishment/

A list of pre-mix herbicide ratios in field corn and grain sorghum using rate per acre, component herbicides and equivalent rates per acre.