Rental agreements and rates are influenced by the landowner’s costs, the tenant’s expected earnings, previous rates charged, competition for the land, government programs, tax laws and the non-agricultural economy. The results of a statewide farmland leasing survey conducted in 2016 are reported here. Respondents were individuals contacted through the Oklahoma Cooperative Extension Service who agreed to complete periodic surveys plus recipients of a mailing by the Oklahoma Agricultural Statistics Service. Approximately 190 surveys were returned with usable data. Figure 1 shows the regions of the state used in reporting survey results: northwest, southwest, northcentral and east. 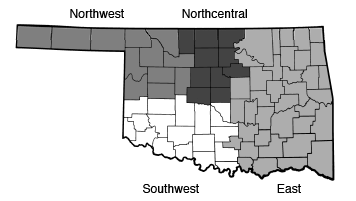 Cash leases require a fixed payment, typically cash (or infrequently, a specified yield such as 10 bushels of wheat). Survey results document some regional differences in rental rates and average sizes of tracts rented. Cash rental rates for dryland wheat were highest in the north-central region of the state, averaging $39.21 per acre, compared to $30.75 to $37.07 in other regions of the state (Table 2)1.  The state average of $36.01 increased less than $1 per acre compared to the 2014 average of $35.54. 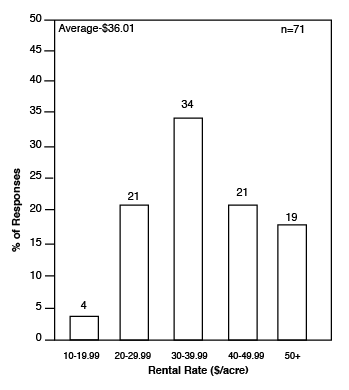 In a crop share lease, certain costs are often shared in the same proportion that production is shared. In crop share leases statewide, the tenant on average receives around 2/3 of dryland wheat, alfalfa or grain sorghum, while paying that or more of the fertilizer, herbicide, insecticide and chemical application expenses (Table 4). On average, the tenant pays nearly all seed and harvesting (combining, hauling, cutting, raking, baling) expenses. Because lime has multi-year benefits, landowners may share in the cost of pay-all costs of lime application if a multi-year lease agreement is not in place. 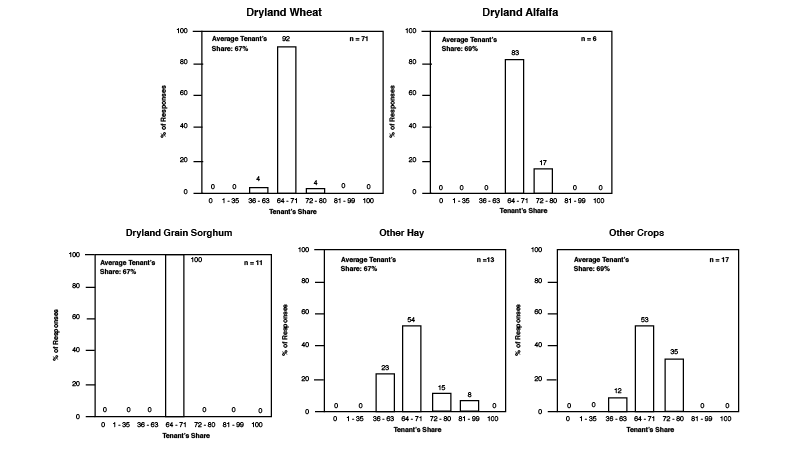 Figure 4a. Relative frequency of responses for items in cropland share agreements, 2016-17.

Figure 4b. Relative frequency of responses for items in cropland share agreements, 2016-17. 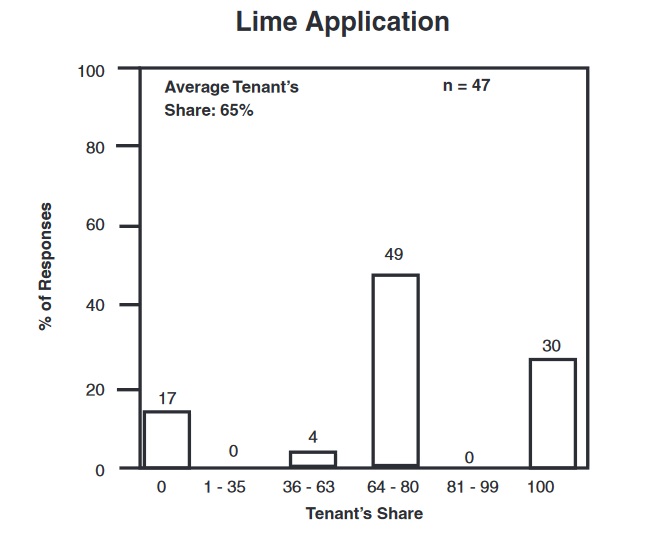 1 Median values that represent single observations are omitted.
2 Rental shares of 100% of the crop for the tenant or zero percent of expenses are generally special situations, usually reflecting concessions or unusual circumstances in another part of the lease. However, as lime improves the soil and this improvement is retained by the landlord if the lease is terminated, it is not unusual for the landlord to pay all lime expenses.

Many lease agreements specify terms and conditions beyond the rental rate, which affect the value of the lease and the “real” rental rate. For instance, tenants may or may not be allowed to hunt, harvest pecans, graze cattle, cut timber, use buildings, improvements and lease out hunting privileges. Lime application costs or similar costs for improvements in which the benefits are shared over a number of years may be shared by the landlord and tenant, or if the tenant pays for them initially, repaid by the landlord at a fixed rate per year. Tenants may be required to maintain fences, spray weeds annually, provide liability insurance, share oil field damages, maintain terraces, and leave strips of grain in the field for game. Landlords may provide a well and water, fencing material or land for a mobile home. Tenants may ask for several months notice if the landlord wishes to terminate the lease agreement. In some cases, leases contain an option to buy with rental payments applied to the purchase price.

Table 5 provides historical data on cropland rental rates for Oklahoma, Kansas, Arkansas and Texas for 2007-2016 as reported by the USDA National Agricultural Statistics Service (NASS). County level cropland rental rate data is available at: http://www.nass.usda.gov/Statistics_by_State/Oklahoma/ Publications/County_Estimates/index.asp. The next bi-annual USDA Cash Rent Survey will be available with the 2018 release in September 2018.

“Fair” rents must be negotiated between tenant and landlord. Regional or state average rental rates may be used as a beginning point for discussion and negotiation of rental rates. However, differences in land quality, improvements, and restrictions on land use can greatly impact the value of potential leases. Likewise, differences in family living expenses and hired labor costs can be substantial for different operations, affecting the maximum rental bids.

New legal restrictions and liability factors may instigate changes in future farm lease agreements. Some farm management firms include language that explicitly requires the tenant to be a good steward of the land. The tenant is expected to follow label restrictions in the use of pesticides, to remain in compliance with the farm’s conservation plan, and to dispose of wastes in a manner approved by the Environmental Protection Agency. Some leases already stipulate precisely what fertilizers, pesticides, and seed may be used on the property. Both landlords and tenants must be aware of changing environmental laws and regulations to avoid potentially costly liabilities.

Related Publications  and Other Resources

In addition to publications, worksheets and free downloadable sample lease forms are available on the site.

A clear depiction of the steps that needs to be taken to establish branding.

Craft breweries in Oklahoma are creating an impact on local and state economies in addition to serving as social hubs for people in communities to interact and engage.

Agritourism is a booming industry and includes any agricultural operation with activities for public participation. In Oklahoma, operations from commodity farms to wineries have added an agritourism aspect to their business, where some hunting outfitters and overnight lodges have been built on agritourism (Murphy et al., 2017).