Information is based on thesis research completed in 2007, but findings are still valuable.

Historically, cropland has been worth more than pasture but recently the differences between crop and pasture prices per acre have been shrinking. In Oklahoma, pasture is now worth more per acre than cropland on average (agecon.okstate.edu/oklandvalues). This is difficult to understand since cropland can always be converted to pasture. This article seeks to explain the differences in the value of cropland relative to pasture over geographic space and time. We examine the differences in the value of cropland relative to pasture land using individual transactions over a 34-year period, which allows analyses that would not be possible with the data used in most studies. The eastern half of Oklahoma is predominantly pasture and the western half is primarily cropland, which allows analyzing various agricultural and non-agricultural factors impacting cropland and pasture land prices. This information will enable appraisers, lenders, producers, realtors, and public citizens to better understand changes in cropland and pasture land prices.

This article is one in a series of articles highlighting recent research on factors impacting Oklahoma agricultural land values.  Other articles include:

Economic theory suggests that the value of land is derived from the net present value of future returns, including agricultural uses, urban influences and recreational uses. Capitalization theory is commonly used to explain the price of land and the capitalization formula most commonly applied is:

Farm income can come from crops, livestock, government payments, and rent. While some studies find that government payments influence cropland values and crop rents, most show little effect on pasture land values and rents as pasture land has not historically been part of farm programs. Government payments and crop returns are included in this study. Crop returns are defined such that they not include government payments. To estimate net income to land, the cost of livestock production must be considered, including operating costs such as feed and labor, plus fixed costs associated with land, machinery and equipment. Technological advances increase both agricultural land values and farm income. Equation 1 is the key to understanding why pasture values have increased relative to cropland. Some or all three sources of returns –agricultural, urban conversion options or recreational uses – have increased more for pasture than for cropland.

The first possibility is that returns to cattle production have increased relative to crop production and, Oklahoma cropland can easily be used for winter forage production for cattle if planted in small grains or a winter perennial such as Jose tall wheatgrass. Economies of size are such that a quarter section of land is uneconomical to farm by itself. But, it is feasible (although perhaps not profitable) to manage a small cow herd or graze a few stockers on 160 acres. Thus, if someone wants to build a house and farm part-time, cattle and therefore pasture land are much more practical than cropland. In addition, pasture may provide more scenic benefits. Thus, while agricultural returns are a possible factor, they do not appear to tell the whole story as rental prices of cropland remain above rental prices of pasture (Doye and Sahs 2007a and 2007b).

Research suggests that urban effects are increasing in importance. For some urban conversion uses, such as building a shopping center or high-density housing, cropland may be preferred. Cropland tends to have less slope and may require less dirt movement. It also typically has more useable acres for commercial development. For exurban development or low-density housing, pasture land with some mature trees is likely preferred. Substantial development of rural areas occurs outside of city limits. To capture urban influences on land values, variables such as per capita income, population density, population growth, and/or distance to urban areas are included in the analysis.

The third source of returns is recreation. In Oklahoma, the primary recreational use of agricultural land is deer hunting. Most cropland does not provide year-round forage necessary for white-tailed deer as it is in wheat. Nor does it offer the small amount of woody cover required by deer. Pasture land produces more deer than will cropland. In the 1970s, deer numbers and harvest were small, but Oklahoma now has a large deer population. The increase in the importance of deer hunting could explain the increase in the value of pasture relative to cropland.  This study uses actual land sales transaction data to explore changes in cropland and pasture land prices by addressing structural changes over time.

Our statistical model specifies agricultural land prices as a function of land characteristics, namely factors associated with agriculture, recreation, and urban values. The multi-level data set includes both county-level data and parcel characteristics.  Models are estimated for western and eastern regions of Oklahoma using 1972 to 2005 data. A four-year moving average is used for crop returns, government payments, and cattle prices; hence, the estimation uses only land price data from 1974 to 2005.

The explanatory variables and description statistics are listed in Table 1. More detail on the data can be found in AGEC-250, “The Environment for Oklahoma Agricultural Land Prices, Past and Present.”

Given the focus on agricultural values, the data set used to estimate the models is restricted to tracts containing eighty or more acres since smaller tracts are often used for non-agricultural purposes.  A maximum sales price of $3,000 per acre is set to exclude observations presumed to be non-agricultural tracts. A minimum sales price of $50 per acre is specified as these may represent transactions among related individuals. Data from Tulsa and Oklahoma counties were removed, since they are almost exclusively urban areas. Data on parcels within fifteen miles of Oklahoma’s twelve largest urban areas are excluded to minimize urban influences from major urban areas.

aMinimum and maximum price per acre set to delete outliers.

The model was expected to show regional differences with the west reflecting a premium for cropland and the eastern region a premium for pasture. Other differences in the two regions such as population density and rain were also expected to be significant. In addition, irrigated cropland should command a premium in any part of the state, since there is a substantial cost in installing irrigation equipment and land leveling. The percent of cropland/crop returns interaction variable was expected to be positive and significant for both regions. In the estimated regression model, most, but not all, of the coefficients had the expected signs and were statistically significant. The interaction terms in the regression equation allowed for testing the hypotheses as to why pasture land prices have increased relative to cropland.

Figure 1. Cropland and Pasture land Price per Acre for the Western Region. 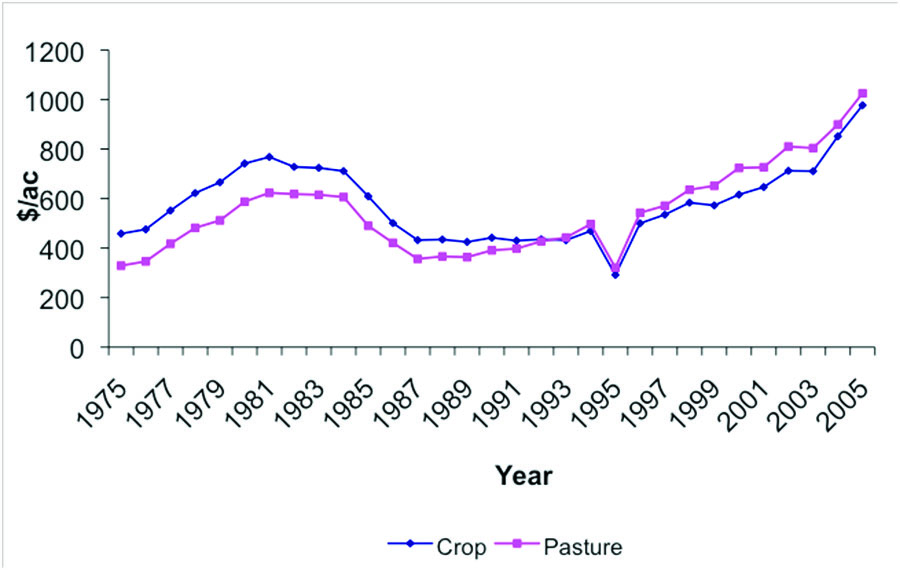 Figure 2. Cropland and Pasture land Price per Acre for the Eastern Region.

The purpose of this study was to explain the relative differences in cropland and pasture land values for Oklahoma over a 34 year time period. The state was divided into two regions to represent the differences in production, cropland and pasture land. Our results indicate an increase in pasture land prices relative to cropland prices when adjusted for agricultural, recreational, and urban influences for both eastern and western Oklahoma. The differences in the two regions also reflect differences in cropland and pasture land prices. The western region indicated premiums for cropland until the mid 1990’s.  Pasture land began commanding a price premium in the early 1990s in the eastern region. In the eastern region, an increasing deer herd is a major contributor to increased pasture values. While deer are also important in western Oklahoma, income growth is even more important. These results show that pasture is more highly valued for recreational development. Our findings suggest that the income approach to appraising agricultural land is less useful than in the past.

Ways to scout and manage alfalfa weevil in Oklahoma