Drainage of soil water can lead to the loss of nutrients when those nutrients are dissolved in the soil solution and move beyond the root zone. This movement of nutrients from the root zone to the soil below is called leaching. In Oklahoma, average drainage rates from the top 2 feet of soil ranged from 0.20 to 10.5 inches per year from 1998-2014 (Figure 1), indicating that the leaching potential may be high in certain areas. This potential loss of nutrients poses a problem, both environmentally and economically, as leached nutrients may be transported to underlying groundwater reservoirs and as fertilizers are lost from producers’ fields. For example, if a producer applied 100 pounds urea per acre (equal to 46 pounds nitrogen per acre) at $0.18 per pound of product over a 160-acre field, the total cost of fertilizer alone would be $2,880.00. Supposing 10 percent of applied nitrogen is lost due to leaching, the producer would experience an immediate economic loss of $288 and 736 pounds of nitrogen would be introduced into the environment.

Soils that have high infiltration rates and a low ability to retain dissolved nutrients, such as sandy soils or well-aggregated soils with low organic matter contents, are much more likely to leach nutrients than soils with higher clay and organic matter contents. This is because clay particles and organic matter have a high number of adsorption sites on which solutes may be held (i.e., a high cation exchange capacity), while sandy soils and soils with low organic matter contents have fewer adsorption sites. Additionally, the presence of large pores in the soil formed by biological activity or root growth and decay may cause much of the flowing water to bypass a large portion of the soil matrix, a phenomenon called preferential flow. Soils with shrink-swell clays also may develop cracks, which allows for preferential flow. In many cases, preferential flow reduces the ability of the soil to capture nutrients and leads to increased levels of leaching to underlying groundwater aquifers.

The three most commonly applied nutrients are nitrogen (N), phosphorus (P) and potassium (K). Of these nutrients, nitrogen is the most likely to be leached from the soil. This is because a portion of nitrogen applied as fertilizer is converted by microorganisms in the soil to nitrate (NO3-) via mineralization (conversion of organic nitrogen to nitrate [NO3-]) or nitrification (conversion of NH4 to NO3-])). After this transformation, NO3– leaching may occur because NO3-]) is highly mobile in most Oklahoma soils due to the repulsion of NO3-]) anions by negatively charged soil particles. This high level of mobility leads to NO3-]) leaching when soil moisture conditions allow for downward movement of soil water.

In general, phosphorus is relatively immobile in soils because it tends to precipitate into solid forms. In low pH soils, phosphorus is commonly found in solid, highly stable aluminum phosphate (AlPO4) and iron phosphate (FePO4) compounds. In high pH soils, phosphates (PO4-3) are usually bound to calcium as Ca3(PO4)2. However, PO4-3 may be leached in very sandy soils that have few adsorption sites or in soils high in dissolved organic forms of phosphorus, which exceed the soil’s adsorption capacity. When the soil can no longer adsorb phosphorus or when surface runoff contains high levels of phosphorus, loading of surface waterways may occur as high levels of dissolved phosphorus are leached from shallow soils or transported over the land surface into nearby surface water bodies.

Potassium is also generally immobile in soil because it is a positively charged ion (i.e., a cation) that is held tightly by negatively charged soil particles. However, similar to phosphorus, potassium also may become mobile in highly permeable soils with few adsorption sites, such as sandy soils and in soils overwhelmed by cations, such as calcium (Ca2+) and potassium. Additionally, potassium may become mobile in soils with low pH because they have a high concentration of hydrogen ions (H+). In these instances, the mobilization of potassium is caused by competition among a large number of cations for a limited number of adsorption sites in the soil.

Nutrient leaching in urban areas also can be a significant source of environmental contamination. The overuse of fertilizers on lawns and gardens may lead to the loss of concentrated amounts of nutrients, especially nitrate, via leaching. Though nutrient applications in urban areas are usually done over smaller areas than agricultural sources, the amount of fertilizer applied is sometimes higher than necessary. This overapplication of nutrients may result in relatively large concentrations of nutrients being lost from a small area. For example, it has been shown that the amount of NO3– leached in urban areas may lead groundwater NO3– levels in those areas to be similar to or even higher than those under agricultural land (Wakida and Lerner, 2005; Ford and Tellam, 1994).

Improper installation and maintenance of septic systems and wastewater management infrastructure and facilities can also be an important groundwater pollution source in urban areas, leading to the potential introduction of harmful bacteria, hormones, and other contaminants to groundwater reservoirs. For more information on different methods of treating household wastewater, see Fact Sheet PSS-2913, On-site Wastewater Treatment Systems Permitted in Oklahoma.

Effects on Groundwater and Surface Water

Soluble NO3-]) travels downward with percolating water to groundwater aquifers, where it can persist in groundwater for decades. Once NO3- concentrations reach 10 milligrams per liter in groundwater reservoirs, costly remediation is necessary (Nolan, 2002). Nolan et al. (2006) estimated that nearly 2 million people in the U.S. rely on drinking water wells with NO3-]) concentrations greater than 5 milligrams per liter, and more than half a million people rely on wells with greater than 10 milligrams per liter, the maximum contaminant level (MCL) according the EPA water quality standards (Figure 2). Excessive NO3– levels in groundwater reservoirs used as drinking water sources have been shown to cause low blood oxygen levels in infants (also known as “blue baby syndrome”), several types of cancers and occurrence of spontaneous abortions. 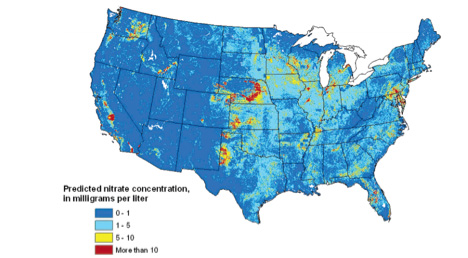 A growing number of communities in Oklahoma have elevated NO3– concentrations in the groundwater that supplies their drinking water. Some of these communities have had to find new water sources or build expensive treatment facilities to lower those NO3- concentrations to levels safe for human consumption. From 2013-2017, the Oklahoma Water Resources Board conducted a statewide groundwater assessment, which included sampling of approximately 750 wells in Oklahoma’s major groundwater aquifers (Figure 3). Of 25 Oklahoma aquifers tested, 17 (68 percent) had at least one sample which contained NO3-]) at levels higher than the MCL. Detailed results for these aquifers, including information about dissolved nutrient and mineral contents, heavy metal concentrations, pH and total dissolved solids levels, can be seen at https://www.owrb.ok.gov/quality/monitoring/GMAP.php. 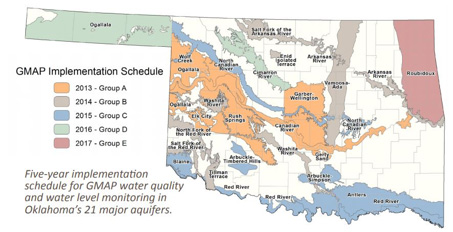 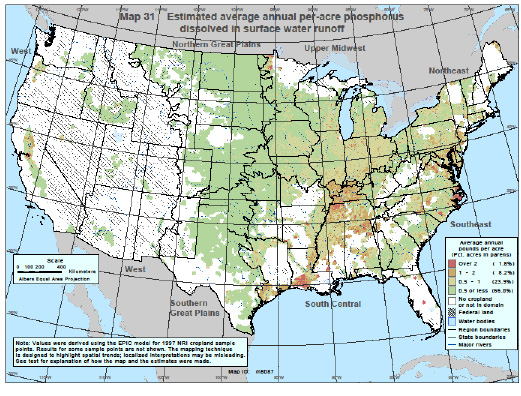 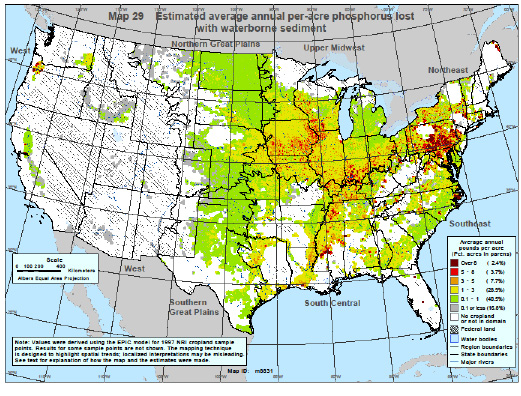 There are a number of practices that can decrease the likelihood of NO3– loss due to leaching. First, regular soil testing allows for an accurate estimation of total nitrogen available in the soil. This reduces the likelihood of overapplication of nitrogen fertilizer, which reduces the amount of nitrogen available to be lost via leaching and minimizes the potential for economic loss. More information about the importance of soil testing, when and how to collect a soil sample, and how to have a soil sample analyzed can be found in Oklahoma State University Extension Fact Sheet PSS-2207, How to Geta Good Soil Sample.

Secondly, using several smaller nitrogen fertilizer applications throughout the growing season rather than one large treatment before planting may also reduce NO3-]) leaching (Clark and Beegle, 2014). This practice allows producers to target specific times during crop growth when plant uptake and demand are the greatest. When in-season applications are made, nitrogen-rich strips can be used to provide guidance regarding application rates for in-season nitrogen management. For more information on nitrogen-rich strips, see the E-1039, Oklahoma Soil Fertility Handbook.

Finally, the use of cover crops and living mulches in agricultural systems has also been proven to have a significant impact on the uptake and immobilization of excess nitrogen (Ochsner et al., 2010; Dinnes et al., 2002). These crops utilize residual nitrogen in a field either during the growing season (living mulches) or after crop harvest (cover crops), significantly reducing the potential loss of NO3– by leaching. However, these systems can be labor intensive, may decrease water availability for the primary crops and may not be economically feasible.

There also are many practices that may reduce the risk of phosphorus loss to surface water. Like nitrogen, regular soil sampling will determine if it is necessary to apply phosphorus and provide guidelines regarding how much to apply. This practice will decrease the likelihood of losing dissolved phosphorus due to overapplication. The easiest way to minimize the risk of pollution by particulate phosphorus is to reduce the potential for erosion from soil surfaces using practices such as no-till, cover crops and terracing, among others. Since particulate phosphorus is bound to soil particles, prevention of erosion is the most effective method of preventing surface water pollution by particulate phosphorus Furthermore, riparian buffer strips will slow any surface runoff flow, causing eroded particulates to settle out and allowing additional time for dissolved phosphorus to potentially be adsorbed to the soil.

Generally, potassium losses from soil are lower than those of nitrogen and phosphorus. Some exceptions include soils overwhelmed with potassium due to overapplication of fertilizers and soils with a large number of macropores or shrink-swell clays with large cracks that prevent the soil from adsorbing potassium in the soil solution. However, even in these cases, the amount of potassium lost is generally much lower than that of nitrogen and phosphorus because potassium is not usually needed in high concentrations.

The following major points are discussed in this Fact Sheet:

Zhang, H. and B. Arnall. How to Get a Good Soil Sample. Oklahoma State University Extension Fact Sheet PSS-2207.