The Nantucket pine tip moth, Rhyacionia frustrana (Comstock), lives throughout the pine forests of the southern and eastern U.S. It ranges from Massachusetts, south to Florida and southwest to Oklahoma and Texas. It also has been reported as far west as southern California. This pest can be very damaging to ornamental pines, plantations of susceptible species of pine and to wild seedlings in open areas. Although trees are seldom killed by attacks from this pest, repeated infestations reduce the growth rate, deform the main stem, reduce wood quality and give the trees a bushy appearance. In Oklahoma, it is a serious pest of ornamental pines and Christmas tree plantings.

The adult moth has a gray body with a wingspan of 1/2 inch (Figure 1). The forewings are covered with brick red and copper patches separated by irregular gray bands. The hindwings are gray-brown. The diameter of eggs are about 1/32 inch and are light green initially, turning yellow to orange a few days following oviposition (i.e., egg laying). Newly hatched larvae are creamy white with a black head. Mature larvae are orange to light brown and measure approximately 3/8 inch long (Figure 2). Pupae are light to dark brown and measure approximately 1/4 inch long (Figure 3). 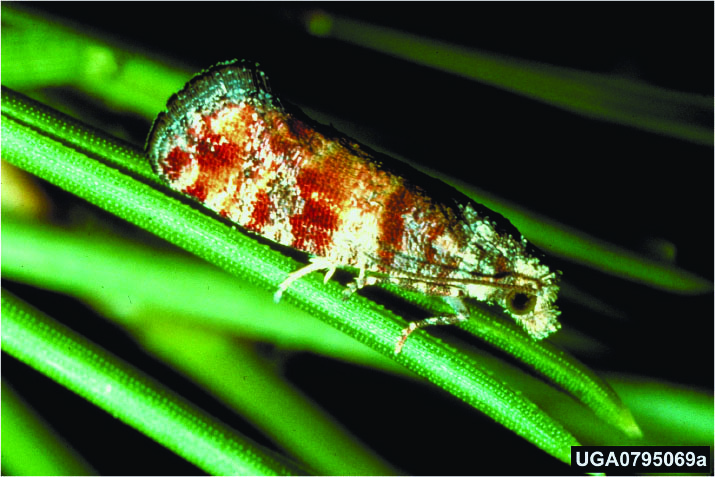 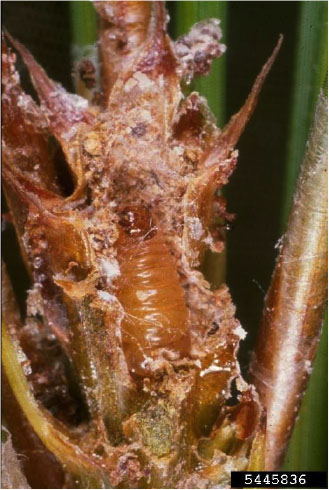 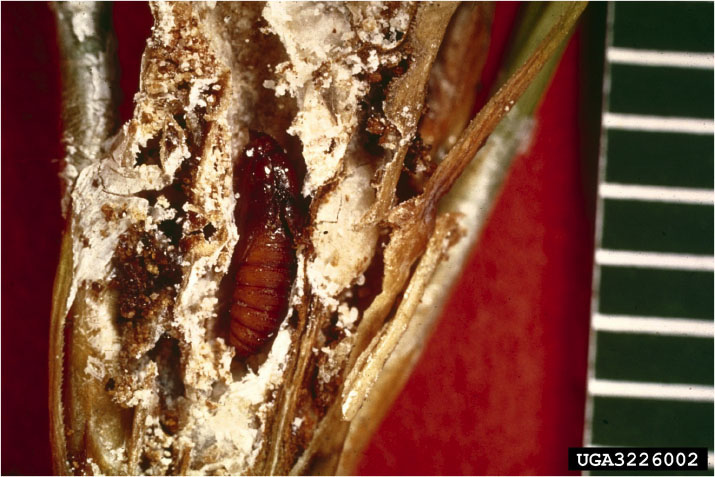 Nantucket pine tip moth overwinters in the pupal stage in damaged branch terminals of infested pine trees. Adults emerge in March and April, then mate. Moths are active from early evening until dusk, resting in the tree canopy during the day. Females begin oviposition about two days after emergence. Studies in Georgia have found that first-generation females lay an average of 54 eggs per female and second-generation females lay an average of 26 eggs. Oviposition occurs on needles or occasionally on buds or twigs near the tips of branches. Eggs may take as long as 30 days to hatch if cool weather follows oviposition in the spring, but they hatch in five to 10 days in warm weather.

Newly hatched larvae construct a small silken web in the axil formed by a needle and the stem. Larvae feed for a few days on the base of needles and on the surface of the stem. Resin and frass accumulate on and around the web as they feed. Later, they migrate to the shoot tips, construct a new protective web, and tunnel into the stem or bud. Larvae continue to feed inside the stem until fully grown, a period lasting two weeks to four weeks. Pupation occurs within the cavities, and adults begin to emerge in approximately 10 days.

The first sign of damage is browning and dying of a few needles at the tips of branches (Figure 4). As larvae tunnel into the stems, branch tips die and turn brown. With additional feeding, this dead area may extend up to eight inches down the twig, especially if more than one larva infests a shoot. New shoots sprout from the twig below the damaged area and become infested by later generations of larvae.

Trees may be killed from severe and prolonged infestations. However, the most important aesthetic and economic injuries include stunted growth (Figure 5) and deformity of the main stem. Where tree vigor is poor, deformities such as stem crooking and forking may occur. In seed orchards, cone and seed production may be reduced through destruction of shoots containing flower buds or conelets. 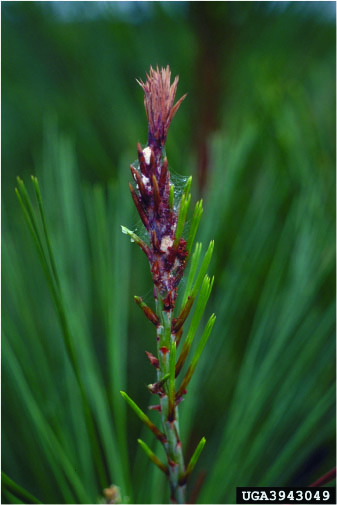 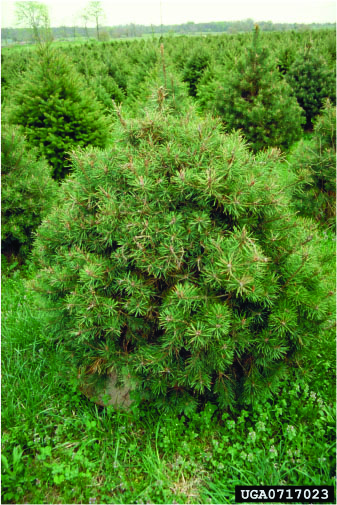 Any application of insecticides should be based on knowledge of presence of Nantucket pine tip moth. The following survey methods are recommended for determining proper timing of insecticide applications:

Pheromones are chemicals insects use to communicate with one another. The female Nantucket pine tip moth releases a sex pheromone to attract males. Synthetic forms of the pheromone are available through various insect management supply companies and are provided as encapsulated forms or on strips of material. The pheromone units are suspended inside either sticky or bucket traps. Pheromone traps are located around or within the nursery. Figure 6 shows an example of a company’s wing trap (pheromone is placed inside the trap and the interior is covered with sticky material to catch attracted moths). Place a minimum of one trap per acre in large nurseries or two traps around the perimeter of small nurseries by March 1 of each growing season. Sources of traps and pheromone lures are noted at the end of this Fact Sheet.

Traps should be examined at least three times to four times per week , recording the number of moths captured. Insecticide applications are targeted to kill the newly hatched larvae and moths. The greatest number of larvae will be affected if the insecticide application is made five days to 10 days after the peak number of moths is recorded. Timing of application should be five days after peak abundance, when temperatures are high in summer. Timing increases to 10 days after peak abundance during cool periods in the spring and fall. Applications may have to be repeated if rain occurs within 24 hours of an application. Applications made before or long after peak moth flight will not impact the largest number of larvae. Thereafter, larvae may enter the stems and no longer be exposed to the insecticide, thereby not killing them. 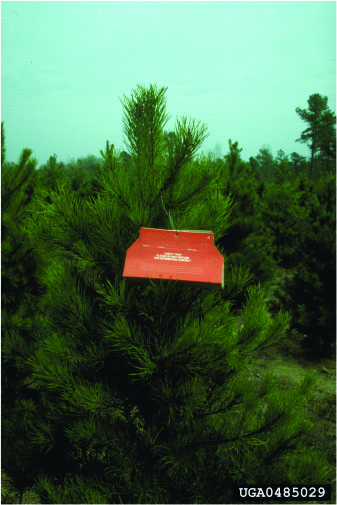 Pheromone traps have proven to be the most effective method to determine moth flight and activity. However, producers may also survey nurseries by dissecting previously infested terminals and stems to determine which life stage is present. Select 10 to 20 dead and infested stems at two- to three-day intervals and dissect them to reveal larvae or pupae. Empty pupal cases indicate that moths have emerged and should provide a reference to determine the beginning of moth flights. Remember, moths begin laying eggs within several days of emergence and eggs hatch several days following oviposition.

In general, moth emergence can be tracked by collecting dead and infested stems or terminals, removing them from the tree, and submerging the basal end in a cup of water. Place the cup with immersed stems in a cage in an outdoor, shaded location and examine them for moth emergence daily.

Research conducted in other southern states has indicated that heat units can be used to time insecticide applications. Heat unit (degree day) models are calculated from the time of peak moth abundance based on pheromone trap captures. However, heat unit models have not been verified in Oklahoma and cannot be recommended at this time.

Tip moth damage can be reduced by using certain cultural practices. Most severe damage occurs on susceptible species of pines less than 15 feet tall and growing in open areas. Larger trees are less susceptible to attack, but are sometimes heavily damaged. Shaded trees are often not as heavily damaged as those growing in full sunlight. An effective method of reducing damage to susceptible pine species is to maintain tree vigor through fertilization and irrigation, which also promotes rapid growth of the tree through the first 6 years  to 8 years, when it is most susceptible to injury. Highly susceptible pines should be planted only on sites to which they are well adapted. On poorer sites, select pine species that are more resistant to Nantucket pine tip moth. Practices such as close spacing and planting under the canopy of older trees may help reduce tip moth populations and subsequent damage.

Use of insecticides is not a cost-effective method of control in commercial forest situations. However, it is economically justifiable for ornamental pine tree and Christmas tree plantations. Insecticides are an effective method for managing pine tip moths when applied in a timely manner. For current insecticide recommendations, contact the local Oklahoma Cooperative Extension Service office. Always read insecticide labels for application rates and proper use to maximize efficacy, safety and environmental protection.

Effective control of Nantucket pine tip moth depends on proper timing of insecticide applications based on trap captures and surveys. However, it must be followed by the effective application of the insecticide. Moths rest on trees throughout the day and primarily move around and lay eggs during the evening hours. Eggs are laid in the terminals of stems, and newly emerged larvae feed primarily on new growth. Therefore, spray patterns and spray volume should be adjusted to provide complete coverage of the trees, especially those areas of new growth. Water-sensitive survey cards can be purchased from agrichemical supply houses and placed within tree canopies during application to provide an indication of spray coverage.

Any control measure, especially the application of an insecticide, will cost money. The grower must determine when expenses related to pest control will provide a greater benefit versus the cost. Therefore, Christmas tree producers must base any control decision on past history of their customers’ requirements for tree uniformity and quality. In a highly competitive market when customers have strict standards regarding tree shape and size, the producer will need to adhere to stringent control procedures and maintain very low levels of damage. However, these standards vary from location to location and rely on the market. Thus, there are no standard recommended thresholds for making an insecticide application to control Nantucket pine tip moth.