Soybeans are grown in diverse productions systems in Oklahoma. This can be seen in variability of cultural management practices that are utilized throughout the state. Appropriate planting dates for soybeans range from early April through early July. This time frame includes nearly half of the total soybean production acres in Oklahoma that are grown in a double-crop system (where soybean is planted following small grain harvest). Double-crop systems are typically planted from mid-June through early-July. Similar variability also can be observed with soybean planting populations as recent surveys indicated that Oklahoma seeding rates ranged from 65,000 to 200,000 seeds per acre. Variability not only makes it difficult to determine best management practices for individual fields but can also drastically influence the management of other production inputs.

Weed management in Oklahoma soybean fields has continued to be one of the greatest challenges facing producers. Inadequate control is one of the most yield-limiting factors, with yield losses of up to 79% being associated with as few as three weeds per foot of row (Klingaman and Oliver, 1994; Bensch et al., 2003). Early-season weed control is important, with the time between emergence to the third to sixth trifoliate being the most critical period (Hay et al., 2017; Soltani et al., 2019). Additionally, increases in herbicide-resistant weeds have become a growing issue for Oklahoma producers. Resistance has resulted in fewer chemical control options and requires growers to implement alternative management strategies, which complicates their decision making.

Growers need to understand how weed management decisions change within these highly variable systems. Furthermore, understanding how cultural management practices can serve as weed control tools will continue to be critical.

Seeding rates have continued to be a critical topic for most soybean producers. Generally, planting recommendations are set as a means to optimize yields. However, altering seeding rates can have a major impact on how the crop can compete with weeds.

The primary goal for using the seeding rate to aid in weed management is through crop-weed competition for critical resources, such as water, nutrients and/or sunlight. Increasing   the seeding rate typically will result in greater intra-row (with in the same row) competition, resulting in higher vegetative growth during the early season. Early vigorous growth will result in rapid canopy closure, which will limit the amount and quality of sunlight that will reach the lower canopy or soil surface, thus shading new and emerging weeds.

This practice can be highly effective at helping to manage weeds in-season. Several studies shown that, when paired with in-season herbicide applications, higher seeding rates could significantly decrease weed density (Renner and Mickelson, 1997; Kells et al., 2004). When weeds are present, increasing soybean seeding rates can decrease the total weed biomass (Arce et al., 2009). This cannot be a stand-alone practice, as increasing seeding rates cannot fully replace in-season herbicide applications. However, if growers move the opposite way and decrease seeding rates as a means to decrease input costs, proper timing of herbicide applications will become more critical as rate of canopy closure will decrease with less intra-row competition. In this case, growers should evaluate the economic benefits of using less seed versus weed management issues. While limited data is available, a producer could potentially benefit from an increased seeding rate on fields with herbicide-resistant weeds.

Weed management is often not a primary focus when growers are determining when to plant. However, growers always should be considering how shifting planting date could alter in-season weed management. From a weed control standpoint, growers should aim to plant before or after a major flush of weeds. This can be challenging as emergence is usually a continual process throughout the spring and early summer months, but some considerations should be made.

One of the most critical periods for weed control in soybean production systems has been documented to be from emergence through the V3 growth stage (Van Acker et al., 1993; Mulugeta and Boerboom, 2000). In most production systems, this would mean maintaining a weed-free environment for the first two to three weeks of production. Prior to this period, not enough vegetative material is present to allow the soybean plant to adequately compete with emerging and growing weeds. This may be true for early planted or full-season soybean production, but later planted soybeans will accumulate less biomass by the V3 stage. Therefore, longer control may be needed to ensure minimal yield loss.

A trial took place at the Mingo Valley Research Station Bixby from 2017-2018 (Figures 1 and 2) to evaluate herbicide programs at three different planting dates in. The three planting dates include an early (April), delayed (mid-May) and late (mid-June) timing, where the early timing represented when conditions were acceptable. All postemergent applications were made using glyphosate (RoundUp®  PowerMax) and dicamba (XtendiMAX®). Preemergent herbicides were applied as a tank mix of pyroxasulfone (Zidua®), glyphosate (RoundUp® PowerMAX) and dicamba (XtendiMax®). 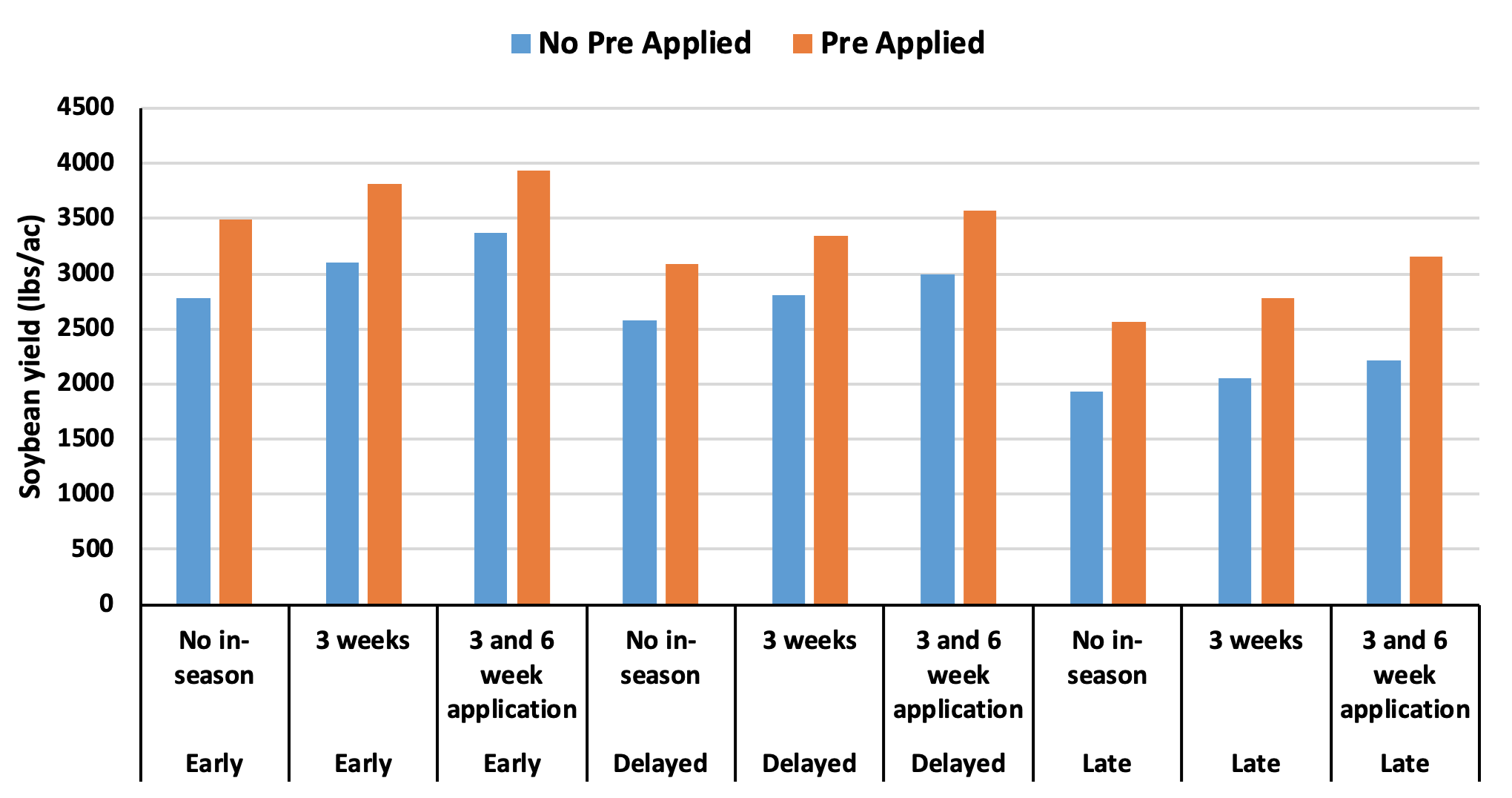 Figure 1. Impact of planting date and herbicide application on soybean yield, measured in pounds per acre, at the Mingo Valley Research Station, 2017.

Figure 2. Impact of planting date and herbicide application on soybean yield, measured in pounds per acre, at the Mingo Valley Research Station in 2018. 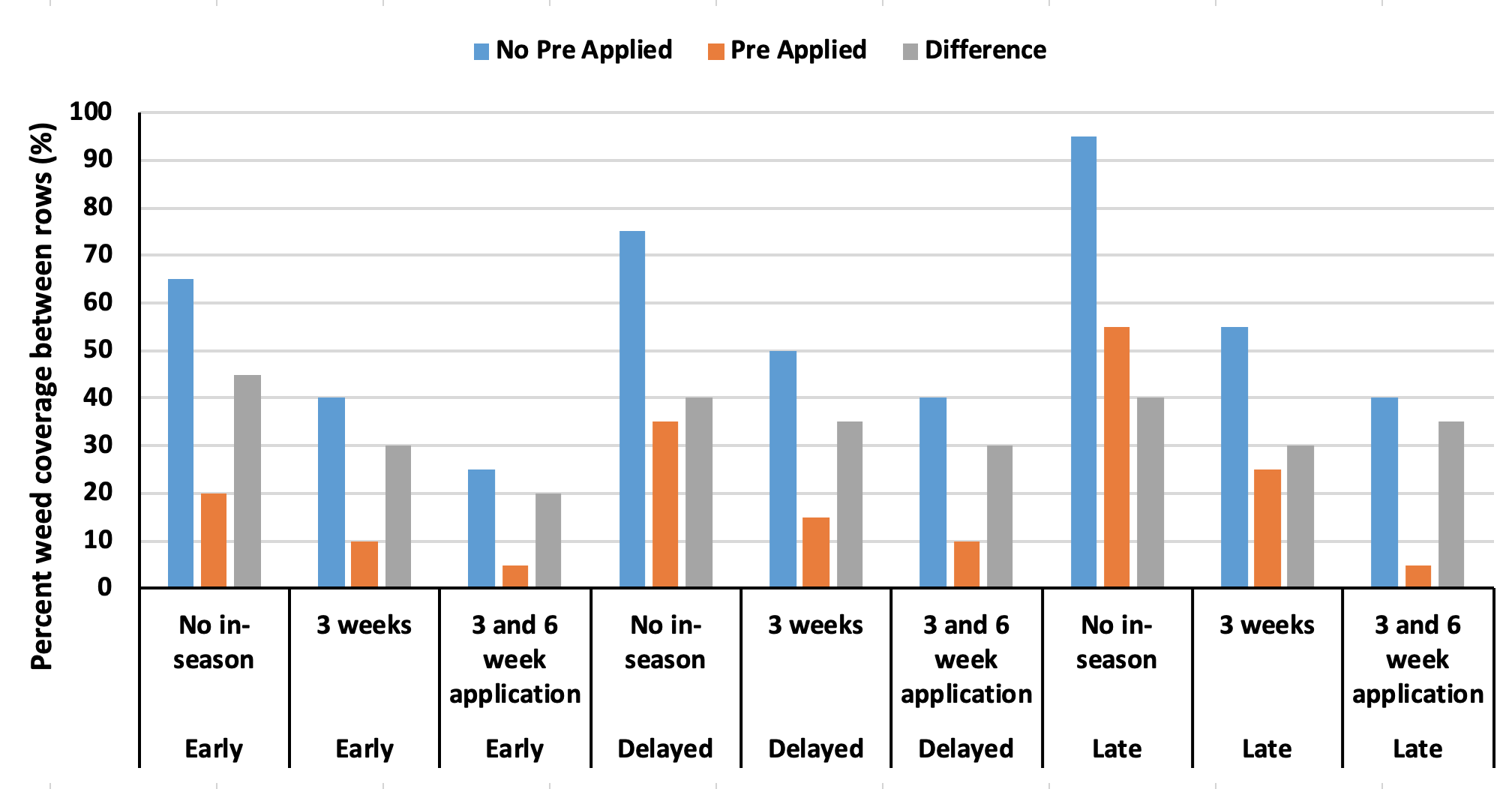 Double-crop soybean is an important opportunity of soybean production in Oklahoma. Depending on the year, nearly half of the total acres planted to soybean are considered a double-crop system.