The following is a discussion of major foliar diseases of wheat in Oklahoma caused by fungi. These fungal diseases can be serious alone or as components of a complex of leaf and stem diseases. Estimates of yield losses caused by these disease are not precise. However, in recent OSU wheat field tests where adequate disease suppression was obtained with fungicides, average grain yield increases ranged from 14 to 16 percent over a period of 11 years starting in 1984. Fungi that infect plants are parasitic, and production losses are mainly caused by the depletion of host nutrients.

The diseases discussed in this publication will be referred to by the most frequently used common name. Names of the disease-causing fungi are listed in Table 1. Each disease will be described separately; however, control and/or preventive measures will be combined in a discussion at the end of the text.

Table 1. Common wheat diseases in Oklahoma and their fungal pathogens.

Three different rust diseases occur on wheat in Oklahoma. Leaf rust is the most common—it causes some loss every year. Stem rust also has the potential to cause serious losses. However, the need for higher temperatures at the critical growth stages for spore germination plus the use of early-maturing varieties usually allows wheat in Oklahoma to escape stem rust. Stripe rust, sometimes called yellow rust, is found mostly in the early spring in the southeastern part of Oklahoma and disappears with warmer temperatures (above 60°F).

Although the following discussion will be limited primarily to leaf rust, all wheat rusts have similar disease cycles. Leaf rust pustules (uredinia) appear on wheat leaf surfaces and leaf sheaths (Figure 1). The pustules produce an abundance of orange-colored spores (urediniospores), which cause heavily infected fields to appear orange or yellow from a distance. Wheat leaf rust persists in Oklahoma primarily in the urediniospore stage, which is a repeating stage. There are five distinct types of spores associated with leaf rust, and while the repeating urediniospores cause leaf rust to persist, some of the other spore types are produced on alternate hosts and can contribute to the epidemiology of the disease.

Leaf rust damage is most severe when infections are established in the early fall and continue during the growing season. In the spring, the most serious wheat production losses are caused when leaf rust has overwintered from fall infections. Fewer tillers, fewer kernels per head, and reduced kernel size cause grain losses. Also, fewer and smaller leaves result in forage losses.

Fall infections of leaf rust occur quite frequently in Oklahoma, and it is not unusual for some rust to survive the winter. Consequently, infections can become established early in the spring when weather conditions are favorable. When conditions are ideal for the pathogen, leaf rust can increase rapidly in 7 to 10 day cycles. Leaf rust spores can germinate whenever there is surface moisture on the leaves and the temperature is above freezing. Morning dew on wheat leaves for 4 to 6 hours is sufficient moisture to allow leaf rust spores to germinate and establish infection.

If the repeating spore stage does not survive the winter, Oklahoma wheat can still be infected. Spores can be blown by south winds from infected wheat growing in Mexico and Texas. In the fall, this process is reversed, and spores are blown from Canada and the Northern Plains states to Oklahoma, Texas, and Mexico. Since wheat is grown from Mexico to Canada, rust fungi can survive continuously. Also, survival of the pathogen through the summer in Oklahoma has been observed on volunteer wheat in fields or along roadways.

Stem rust, as the name implies, infects the stems but it is not confined to the stems. It can infect the leaves, sheath, glumes, awns, peduncles, and even the kernels. The infection first appears as reddish brown, elongated pustules. Stem rust pustules usually are considerably larger than those of leaf rust. The epidermis of the leaves and stems is ruptured and pushed back around the pustule (Figure 2). Stem rust urediniospores seldom germinate below 55°F. Early-maturing winter wheat varieties usually escape stem rust infections.

Stripe rust can be a severe disease in cool moist climates. Usually, only trace amounts occur in Oklahoma. Pustules are light yellow and are arranged in distinct stripes about 1/16″ wide and of irregular length (Figure 3). 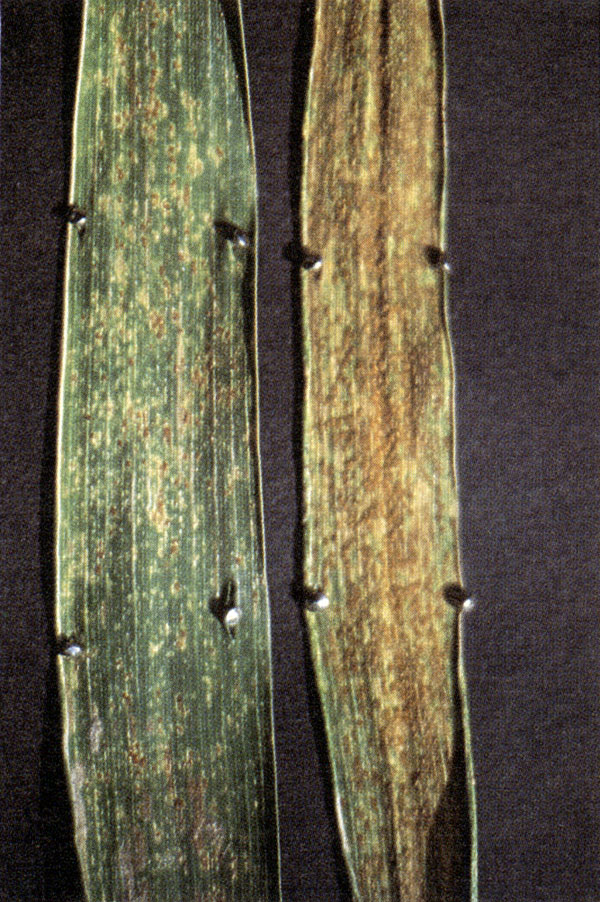 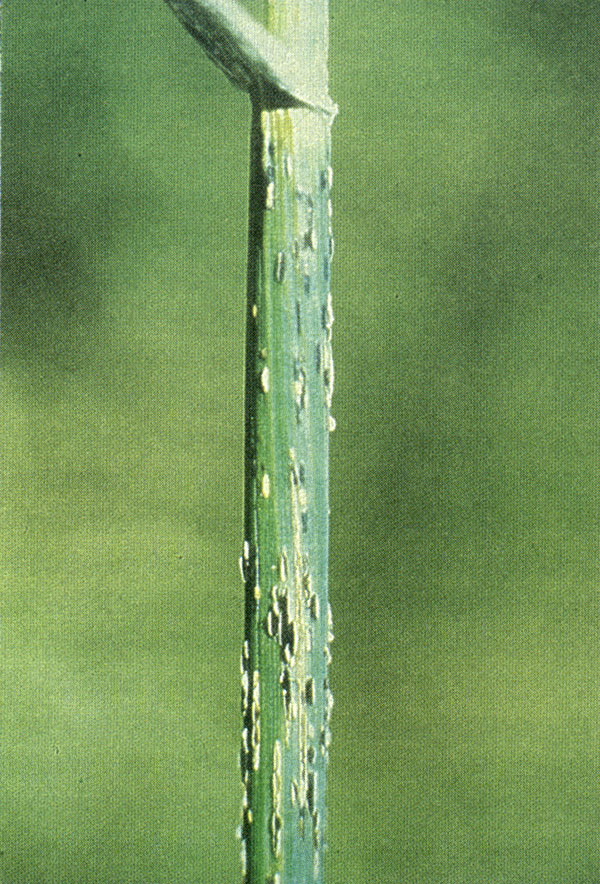 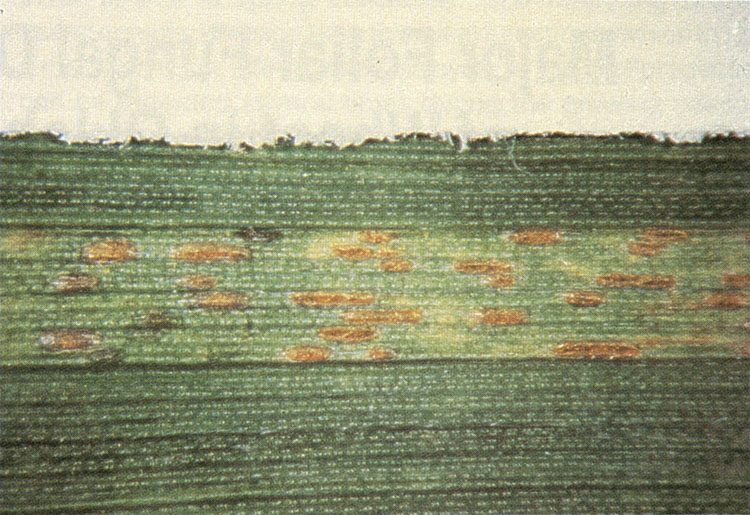 Powdery mildew is caused by a group of fungi that infect many plants, including wheat and other cereals. Powdery mildew occurs to some extent every year. There is considerable varietal difference in susceptibility to this disease. Often, a highly desirable, high-yielding, rust-resistant wheat variety is very susceptible to powdery mildew. The prevalence and severity of powdery mildew increase when large acreages of the more susceptible varieties are grown.

Powdery mildew appears as white, cottony tufts of hyphae on the surfaces of infected wheat leaves (Figures 4 and 5). As the season progresses and plants approach maturity, tiny, round, black, fruiting bodies called cleistothecia (Figure 5) begin to form within the tufts of hyphae. The fungus overwinters as cleistothecia in wheat crop residue from the previous season. Ascospores, the sexual spores, form within the cleistothecia in the spring and are released and carried by wind to the growing wheat plants.

During the spring when powdery mildew is most vigorous, chains of spores develop from the hyphae (Figure 4; lower photograph). These spores easily break off, giving the appearance of white powder flying through the air, spreading the fungus to other wheat plants. Sometimes powdery mildew occurs in the fall, but it usually appears in the spring when wheat is in the jointing stages. Powdery mildew thrives in cool, damp conditions and on lush, rapidly growing wheat. 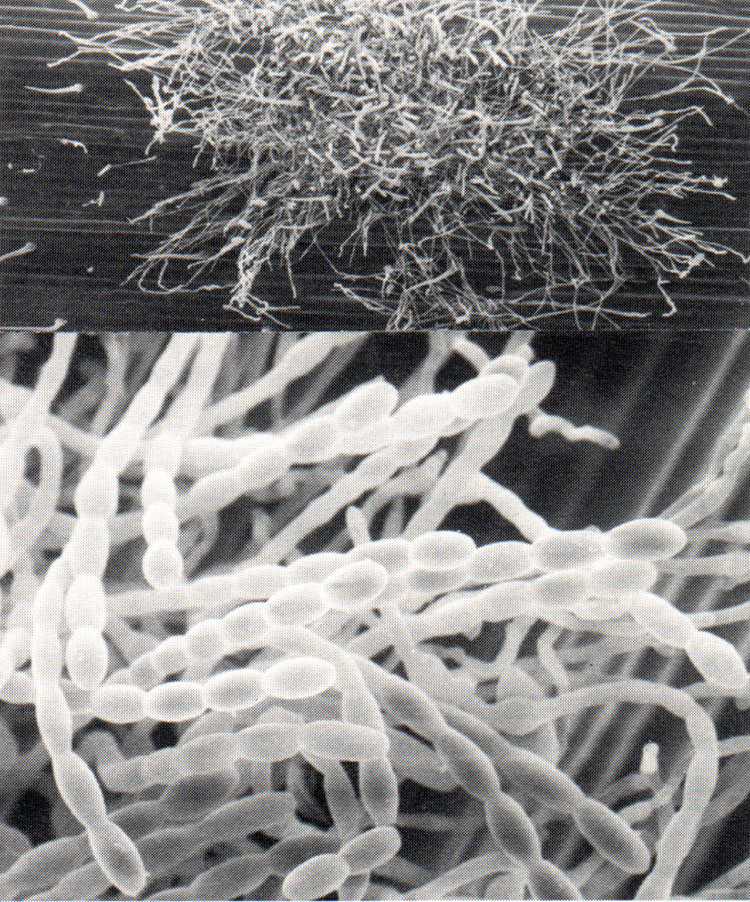 Figure 4. Powdery mildew, as seen in a scanning electron microscope. Top: A tuft of interwoven hyphae (the fungal threads) and small, developing chains of conidia on the leaf surface; X66. Bottom: Chains of mature conidia (the barrel-shaped spores) and hyphae, at higher magnification, X600 (acknowledgment to Phillips Research Center, Phillips Petroleum Co., Bartlesville, OK, for use of their electron microscope to obtain these photographs). 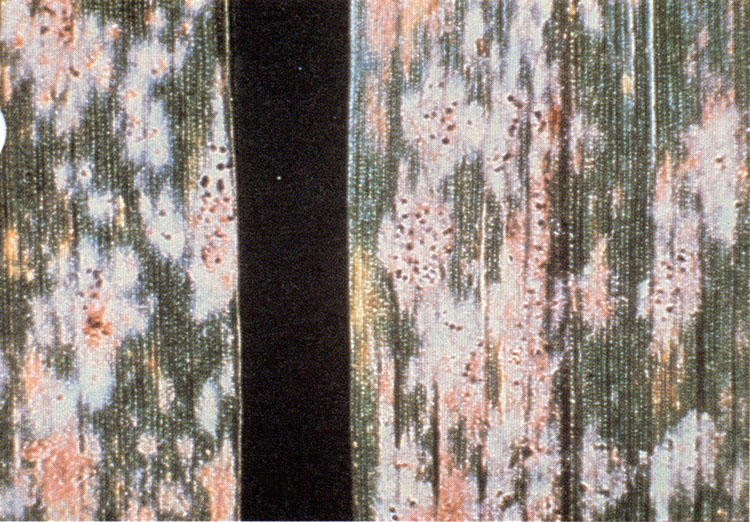 Septoria leaf blotch can be found in Oklahoma wheat from November until maturity. It kills some lower leaves in both the fall and spring. Whenever favorable environmental conditions occur, this disease infects and kills flag leaves, which causes serious grain losses.

The distinguishing symptom of Septoria leaf blotch is the brown to black specks that develop quickly in dying leaf tissue (Figure 6), hence the other common name of this disease—speckled leaf blotch. These specks are spore-bearing structures of the causal fungus. The overwintering fungus produces an abundance of spores in the very early spring. If an extended period of cool, wet weather occurs at this time, the fungus spreads rapidly by both waterborne and windborne spores, which germinate and infect the higher leaves. 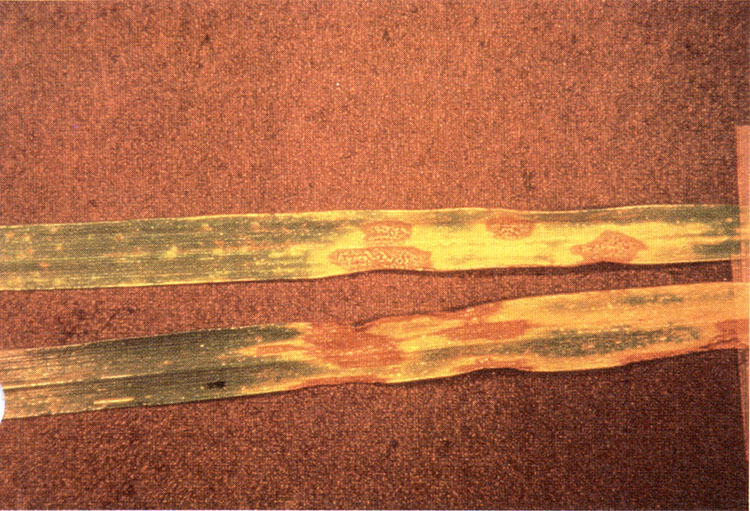 Septoria glume blotch (Figure 7) is most conspicuous on the glumes, but it also occurs on the leaves and leaf sheaths. The specks within the lesions are very similar to those described for Septoria leaf blotch. Microscopic examination of the spores is the only sure means of distinguishing the two Septoria diseases of wheat. 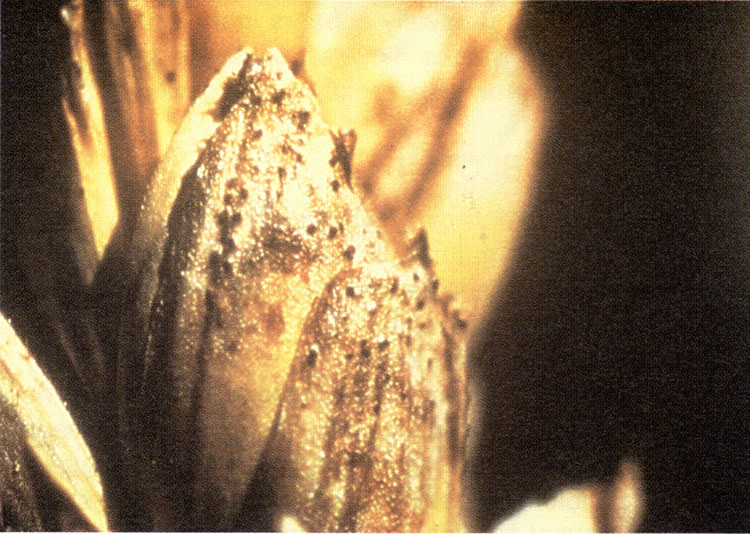 Tan spot is a very common leaf spot disease, especially in continuous wheat. It is often confined to lower leaves and is not conspicuous. Significant losses in Oklahoma are erratic and occur only when flag leaves are infected. Yield reductions up to 28% have been obtained in heavily infected test plots at Stillwater, when compared to the same variety protected by two fungicide applications.

Tan spot first appears on wheat leaves as small, dark, oval lesions with light to dark brown centers. The lesions soon develop into large brown blotches, often surrounded by a distinct yellow border (Figure 8). When the spots are abundant, leaves may turn yellow. As the spots enlarge and coalesce, leaves may die from the tip toward the base. The lowest leaves are infected first in early spring, with the disease spreading to the upper leaves as the season progresses. As wheat matures, the tan spot fungus produces small, black, fruiting bodies that function as survival structures between crop years (Figure 9). These fruiting bodies, called pseudothecia, become visible in straw and stubble, on and above the soil surface, in late fall and early winter, following the year in which infection occurred. In the early spring, the black fruiting bodies on the old straw and stubble shoot sexual spores called ascospores into the air. Ascospores are the initial source of spring infections. The repeating spores, called conidia, develop from the initial infections, which in turn cause additional infections. This cycle of conidial production can be repeated several times during the growing season. Both ascospores and conidia are spread from plant to plant by the wind. Moisture must be present on the leaves for at least six hours at temperatures between 50 and 70˚ F for infections to occur. 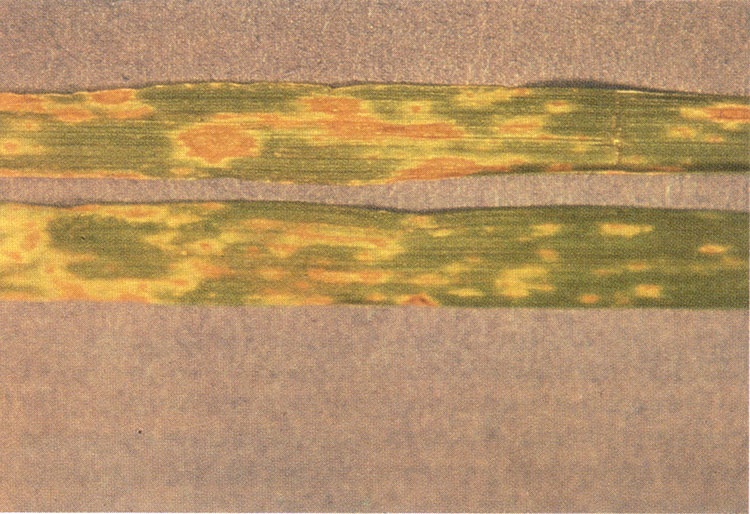 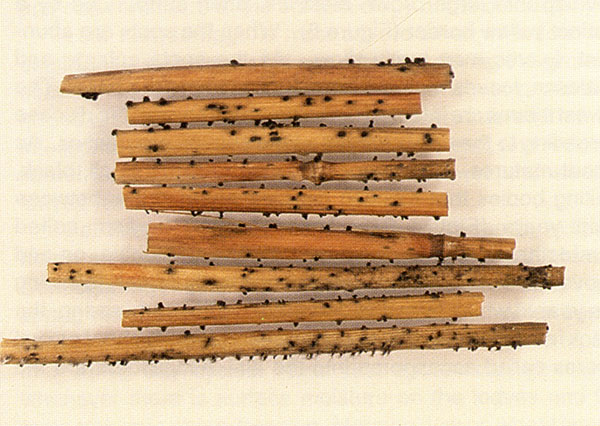 Figure 9. Pseudothecia. Black survival structures of the tan spot fungus, which occur most commonly on straw and stubble and provide the survival means from one crop season to the next.

Disease prevention by growing resistant varieties is the most economical method of control. However, with rusts and powdery mildews, several races are typically present. Races are identified by their ability to overcome specific resistance genes in a host variety. Quite commonly, a new variety may remain resistant for a few years but may become susceptible later as the population of races adjusts and overcomes resistance provided by the host genes. To keep ahead of genetic changes in the pathogen, breeding for resistance must be a never-ending task. For listings of varietal disease reactions, refer to the current wheat variety trials reported annually in the OSU Agronomy Cooperative Extension publication Production Technology.

Several fungicides on the market are labeled for foliar fungal control on wheat. For detailed instructions on fungicide usage, read the manufacturers’ labels. Consult the latest edition of the OSU Extension Agents’ Handbook of Insect, Plant Disease, and Weed Control for a list of suggested fungicides labeled for prevention of foliar diseases on wheat. Additional information on the management of wheat foliar diseases is available on the computer program “WHEA$CON” at OSU Cooperative Extension Service County Offices. This program shows that economic return from fungicide application is usually highest when potential yields are high.

Crop rotation, plowing under crop debris, and destruction of volunteer wheat lessens the chances of severe infections by reducing the overwintering sources of the causal fungi. Particularly, with the Septoria diseases and tan spot, removal or plowing under of old wheat straw is helpful in reducing the initial source of infection.

Leaf rust can be reduced by livestock grazing, especially if infected wheat is grazed in the fall. By grazing the infected and exposed wheat leaves, additional disease development is retarded. With the exception of some respiratory problems under extremely severe infections, leaf rust is not harmful to livestock.