Laminated veneer lumber (LVL) is one of the most widely used engineered wood products for constructional applications. It is a composite product manufactured from multiple thin layers of veneer that are aligned with the length of the finished lumber. This fact sheet summarizes basic manufacturing steps, advantages and disadvantages of LVL compared to other structural engineered wood-based products.

LVL production began in 1941. It was constructed into aircraft parts and was made from 3.6 mm thick Sitka spruce veneer. Because of great demand for LVL, the USDA Forest Products Laboratory did a substantial amount of research related to improving its strength properties. Douglas fir is the most commonly used raw material for LVL manufacture, in addition to Yellow poplar, Southern pine and other softwoods in the United States. Radiata pine and rubberwood are extensively used in New Zealand and Southeast Asian countries, respectively.

Veneer sheets with a thickness of 2.5 mm to 4.8 mm are produced using a rotary peeling technique. Typical veneer thickness for LVL production is 3.2 mm. Rotary peeling of the logs is carried out on a lathe, which incorporates geometry and positioning of a knife as main manufacturing parameters important role to the quality of the veneer. For example, the bevel angle of the knife selected is approximately 23 degrees for softwood to have efficient peeling.

The pressure bar applies a certain amount of pressure on the surface of veneer, so it will constantly be peeled from the log with a uniform thickness and without having any cracks. Figure 1 illustrates schematics of a typical rotary peeling veneer production with a fixed-nose bar and knife.  The side of the veneer next to the knife-edge is called the loose side, while the other side is called the tight side. There are many fine cracks on the loose side of veneer due to lathe checks running parallel to the grain.

In general, LVL production is similar to that of structural plywood; however, the main difference between the two products is the grain orientation of each veneer. In the case of plywood, an odd number of veneer is assembled across each other, so the final product will not only have better mechanical properties, but also will be dimensionally more stable. In the case of LVL, more veneers are assembled along the longitudinal direction, so it will have similar properties to those of solid lumber, because each lamina is parallel to the board axis, as illustrated in Figure 3. 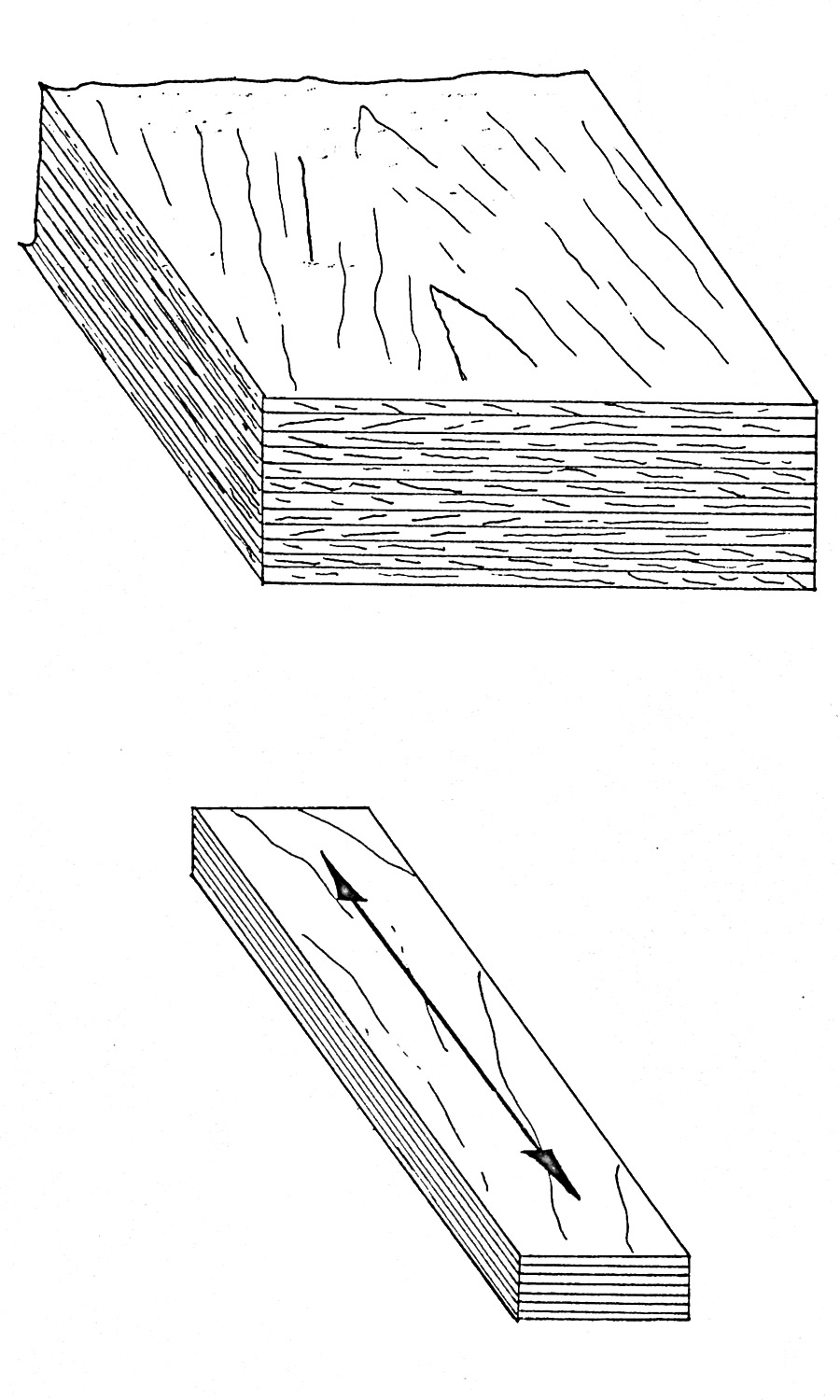 Defects on each veneer are eliminated during the clipping process. Even if defects are left on each veneer sheet, random distribution of such defects during veneer assembly will make the final products more uniform and strength properties comparable to that of high-grade lumber. After exterior adhesive, usually phenol formaldehyde, is applied to the surface of each veneer sheet, they are assembled and pressed at temperatures ranging from 250 to 450 degrees Fahrenheit.

Compared to plywood press, LVL presses are longer. The press line could be either batch-type or continuous. A batch-type press may have one or several openings, which is more efficient for production of shorter length LVL. However, most mills use a continuous press line. Billets are manufactured up to 6-feet wide with a maximum shipping length of 80 feet. Figures 4 and 5 show a typical manufacturing process diagram of LVL.

Laminated veneer lumber is a versatile wood-based product. Together with plywood, lumber or oriented strand board (OSB), LVL can be used for many structural applications. Some of the most popular uses of LVL include I-joists, header, rimboards, truck bed decking, roadway signpost, beam, truss, special applications such as skateboards, and custom-made panels for marine uses.

Major advantages of LVL include its dimension, shape, high strength properties and low cost. The size of LVL is not limited by log size, due to its manufacturing method. LVL is one of the strongest wood-based construction materials relative to its density. Because it is manufactured with homogeneous quality that has a minimum number of defects or even distribution of defects, mechanical properties of the final product can be predicted. In general, LVL can be produced in different shapes depending on for what it will be used. It also has the great advantage of using wood resources efficiently.

Conversely, LVL has several disadvantages as wood composites. Enhancement of strength properties of LVL by densification of veneer during the press is very limited. Although its dimensional stability is better than solid wood, the product may result in some defect, such as warping, if it is not properly stored in the warehouse. Also, LVL requires high capital investment to have relatively low production cost. Therefore, high demand is necessary to have a profitable operation.

Detailed information about LVL manufacturing and its properties also can be found in the following literature: