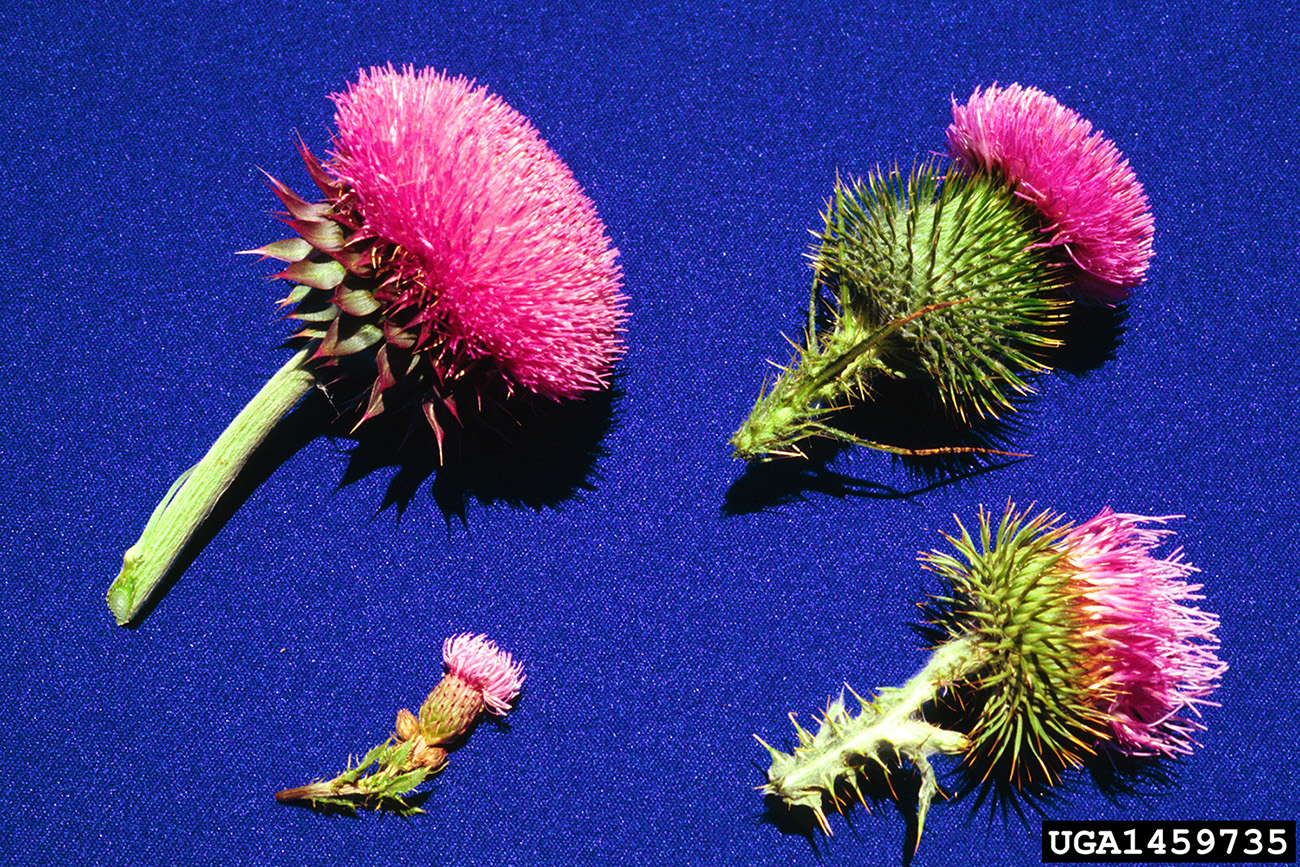 Bull thistle (Cirsium vulgare) (Figure 2) has been present in Oklahoma for more than 40 years and occurs statewide. It rarely reaches infestation levels that justify treatment, probably because the insects that feed on native Circium spp. thistles also feed on bull thistle. 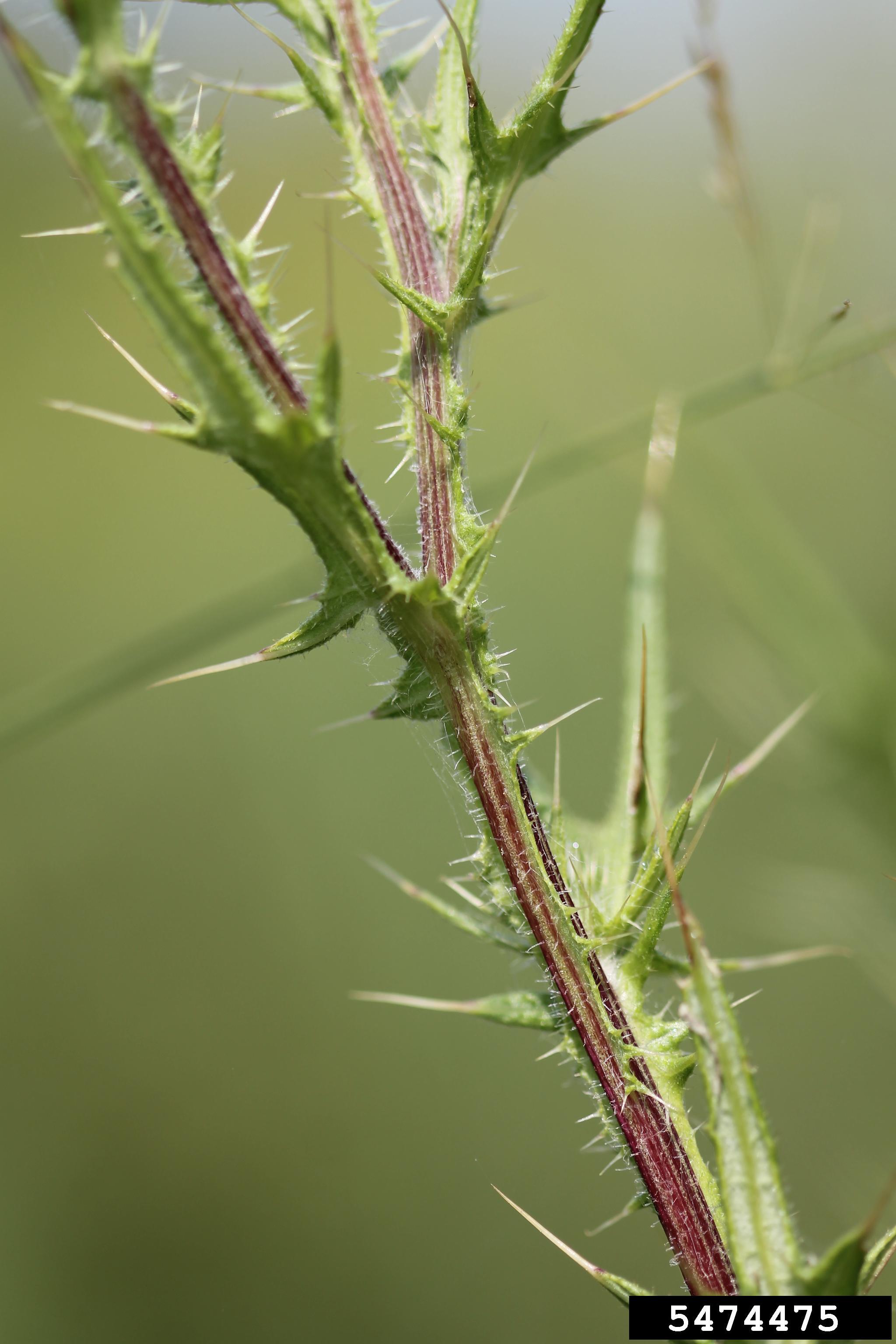 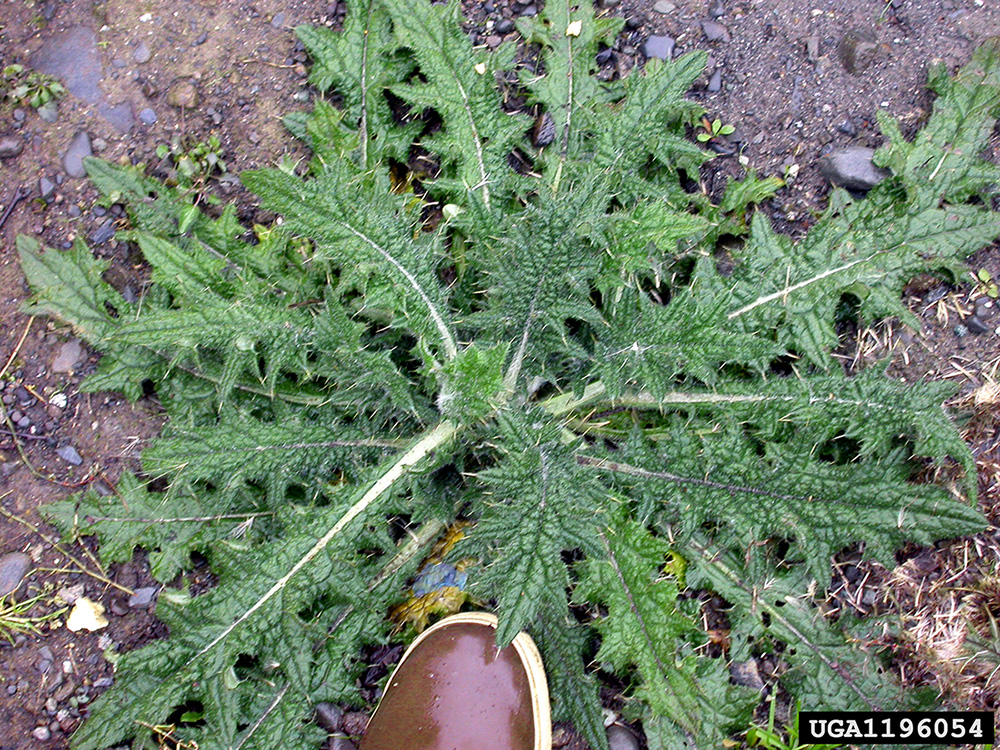 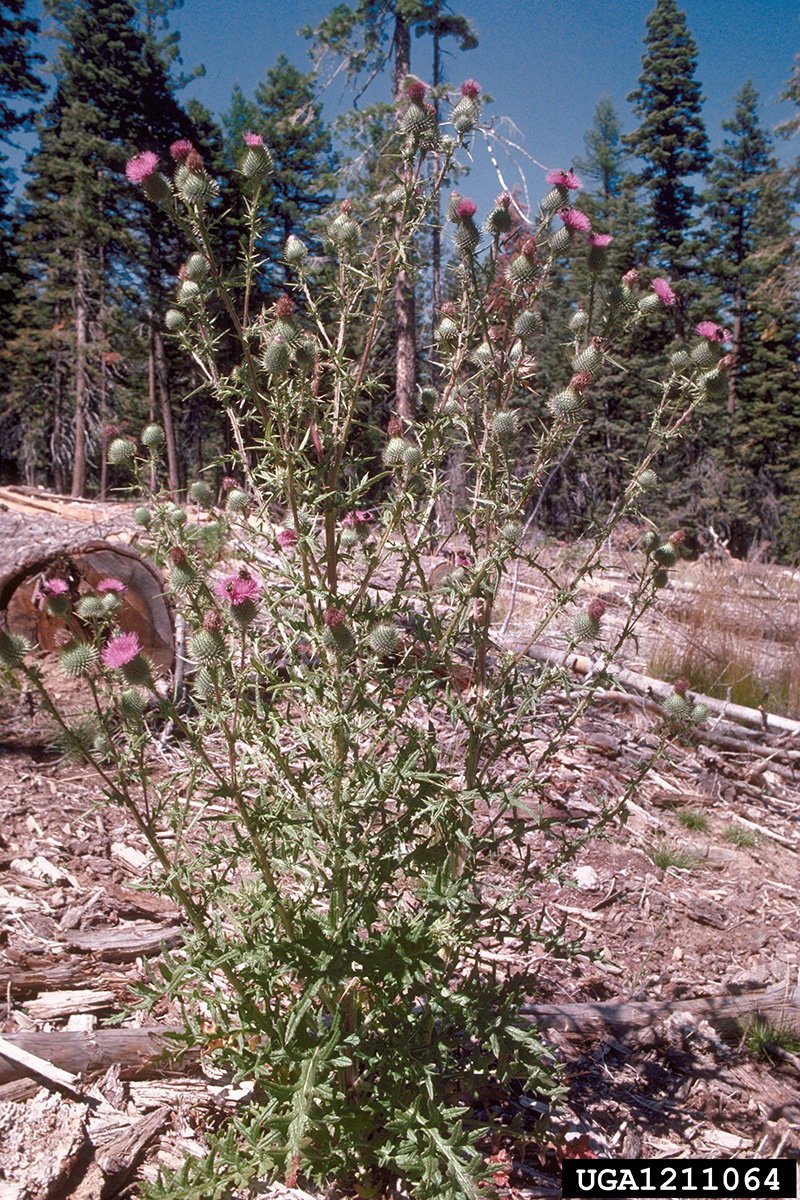 Figure 2. The leaf margins of a flowering bull thistle plant (a) are tipped with spines, and the stems have spiny wings. Bull thistle generally behaves as a biennial in Oklahoma, remaining in the rosette stage (b) for most of its life before bolting (c) The flower heads of bull thistle (Figure 1) are top-shaped and can be white to purple in color. Photos: Rob Routledge, Sault College, Bugwood.org; Loke T. Kok, Virginia Polytechnic Institute and State University, Bugwood.org; Dave Powell, USDA Forest Service (retired), Bugwood.org 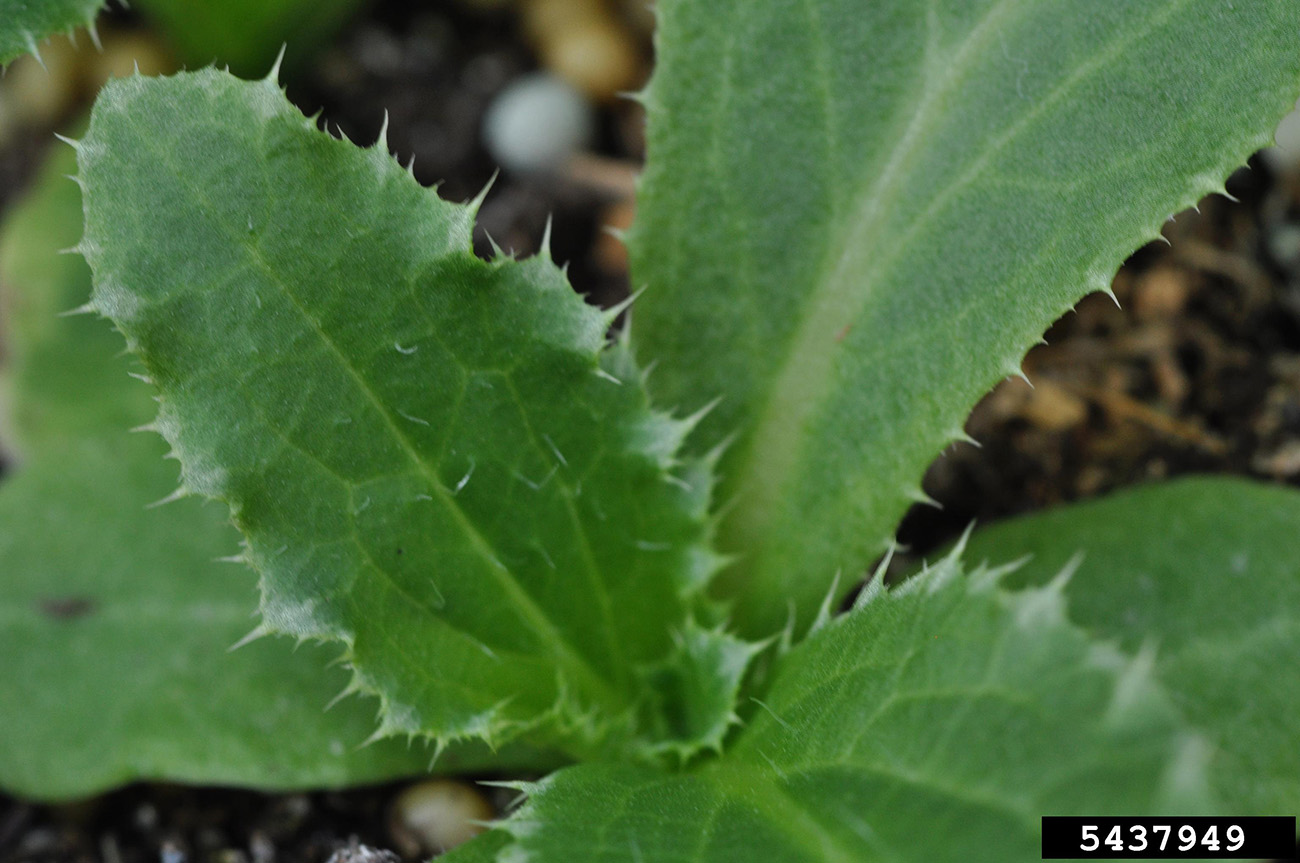 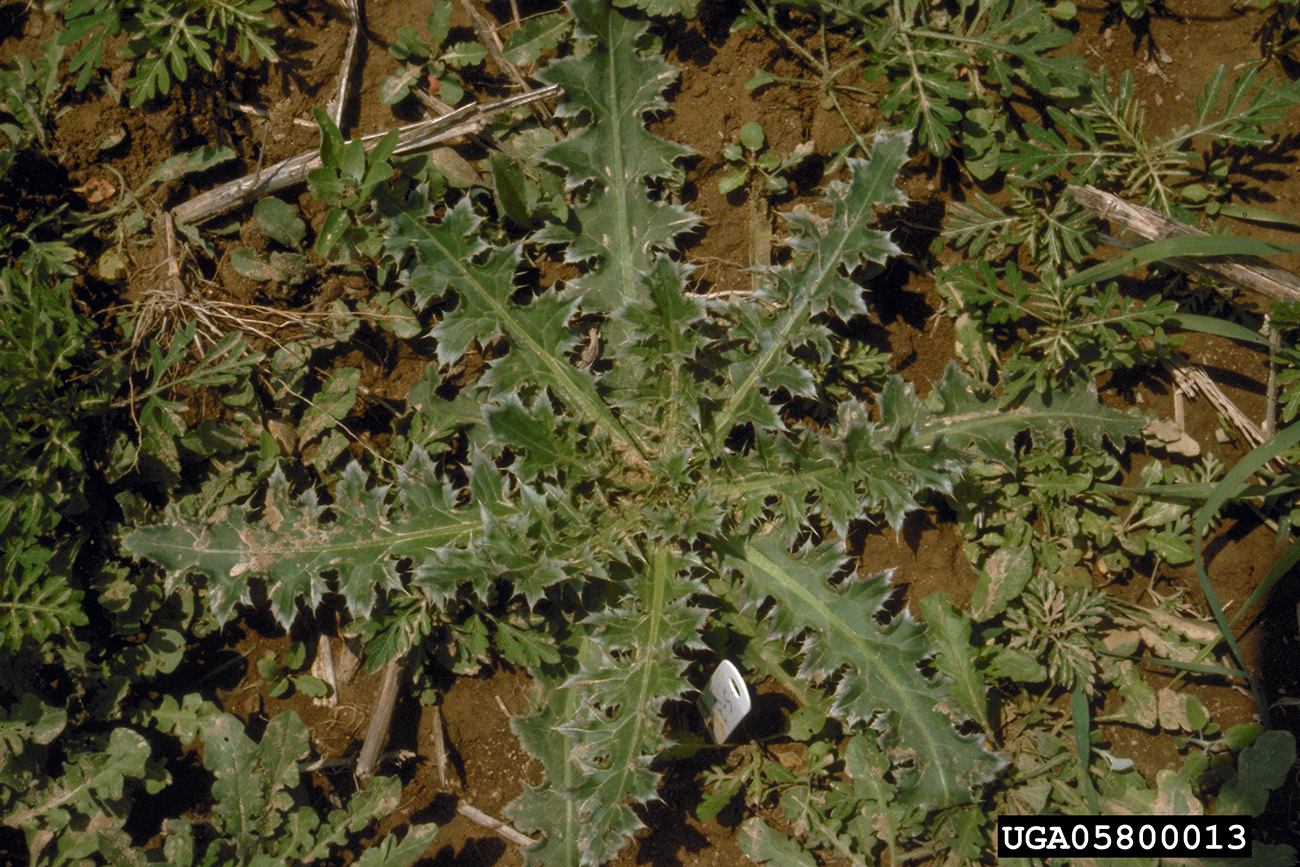 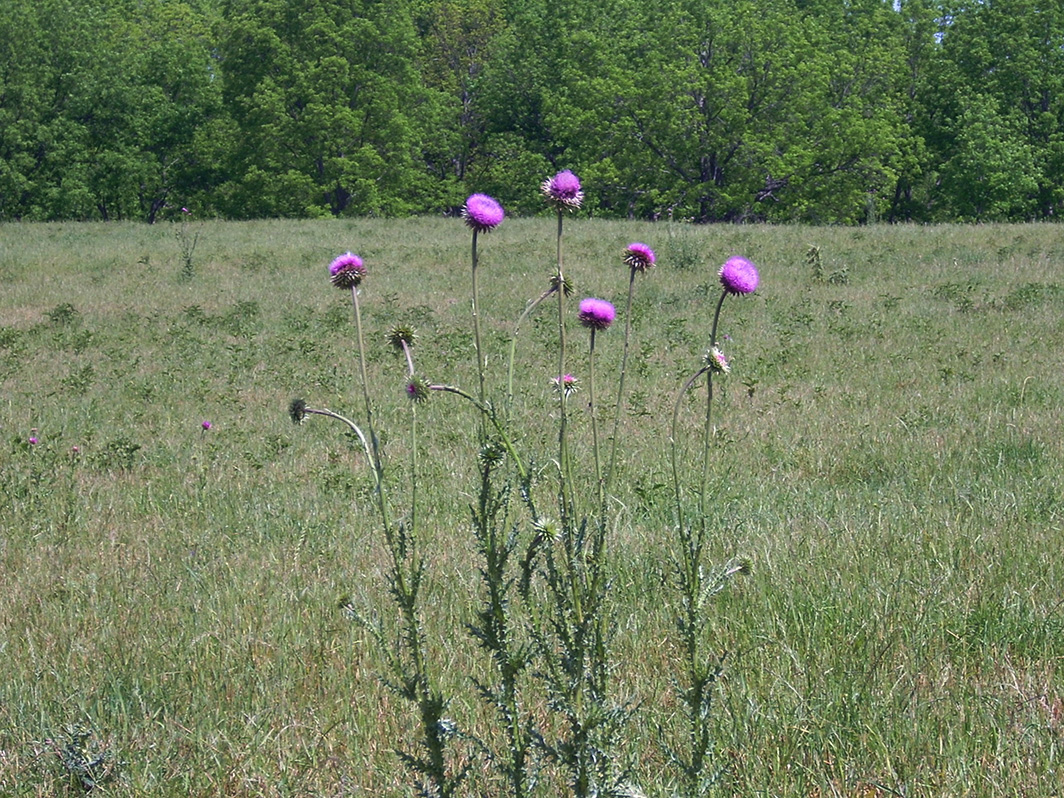 Figure 3. Musk thistle seedlings (a) can emerge in the fall and behave as an annual weed or in the spring and behave as a biennial weed. The rosette leaves of annual musk thistle plants (b) (i.e. emerging in the fall) are not as deeply lobed or spiny as the leaves of the biennial plants. Biennial musk thistle plants (c) can produce more than 10,000 seeds per plant. The flower heads of musk thistle (Figure 1) are deep rose to purple and powder-puff shaped. Photos: Bruce Ackley, The Ohio State University, Bugwood.org; Loke T. Kok, Virginia Polytechnic Institute and State University, Bugwood.org; Tom A. Royer, Oklahoma State University

Scotch thistle (Onopordum acanthium) (Figure 4) Declared a noxious weed in Oklahoma, it first invaded Oklahoma from the west and has been found in Roger Mills, Custer, Love, Texas, Harper and Woodward counties. It is more difficult to control than other invasive thistles. 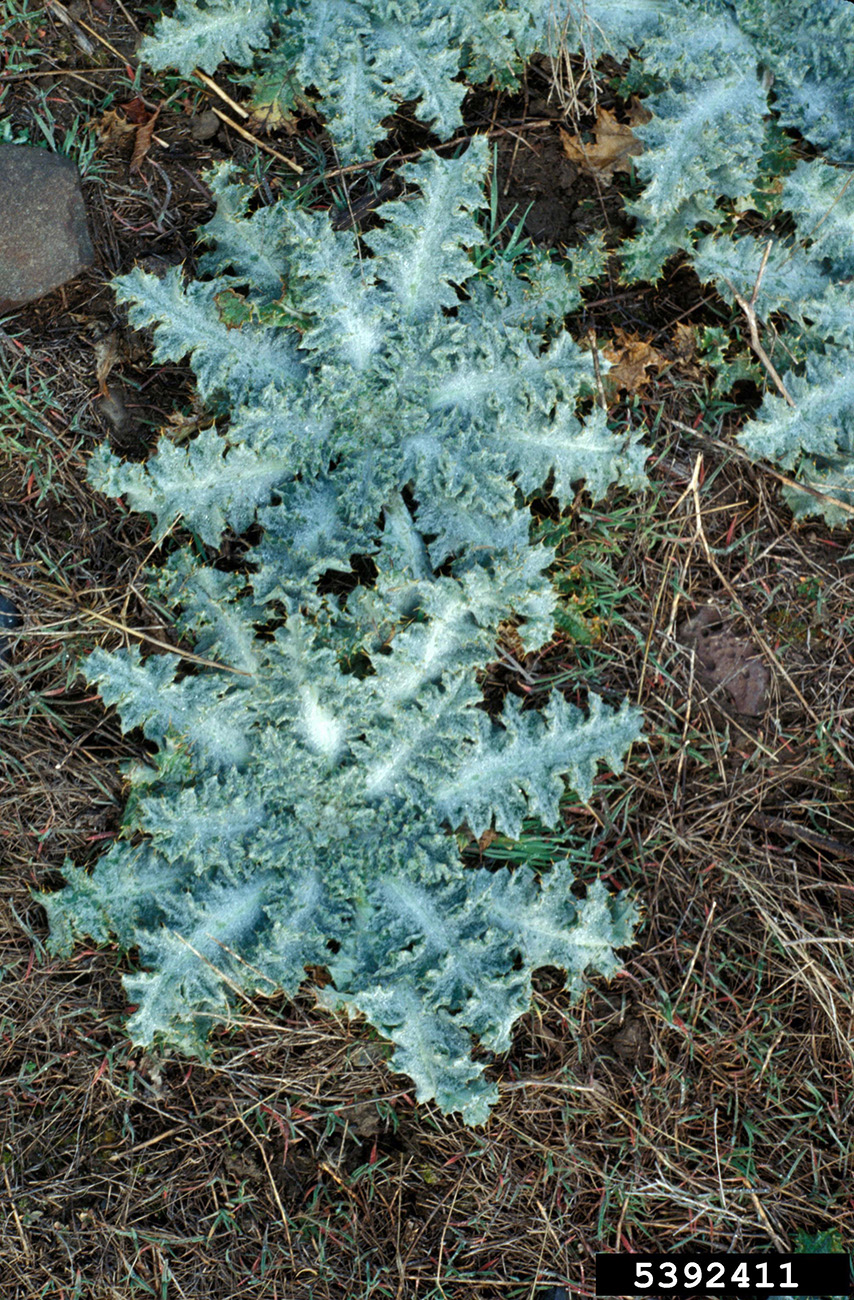 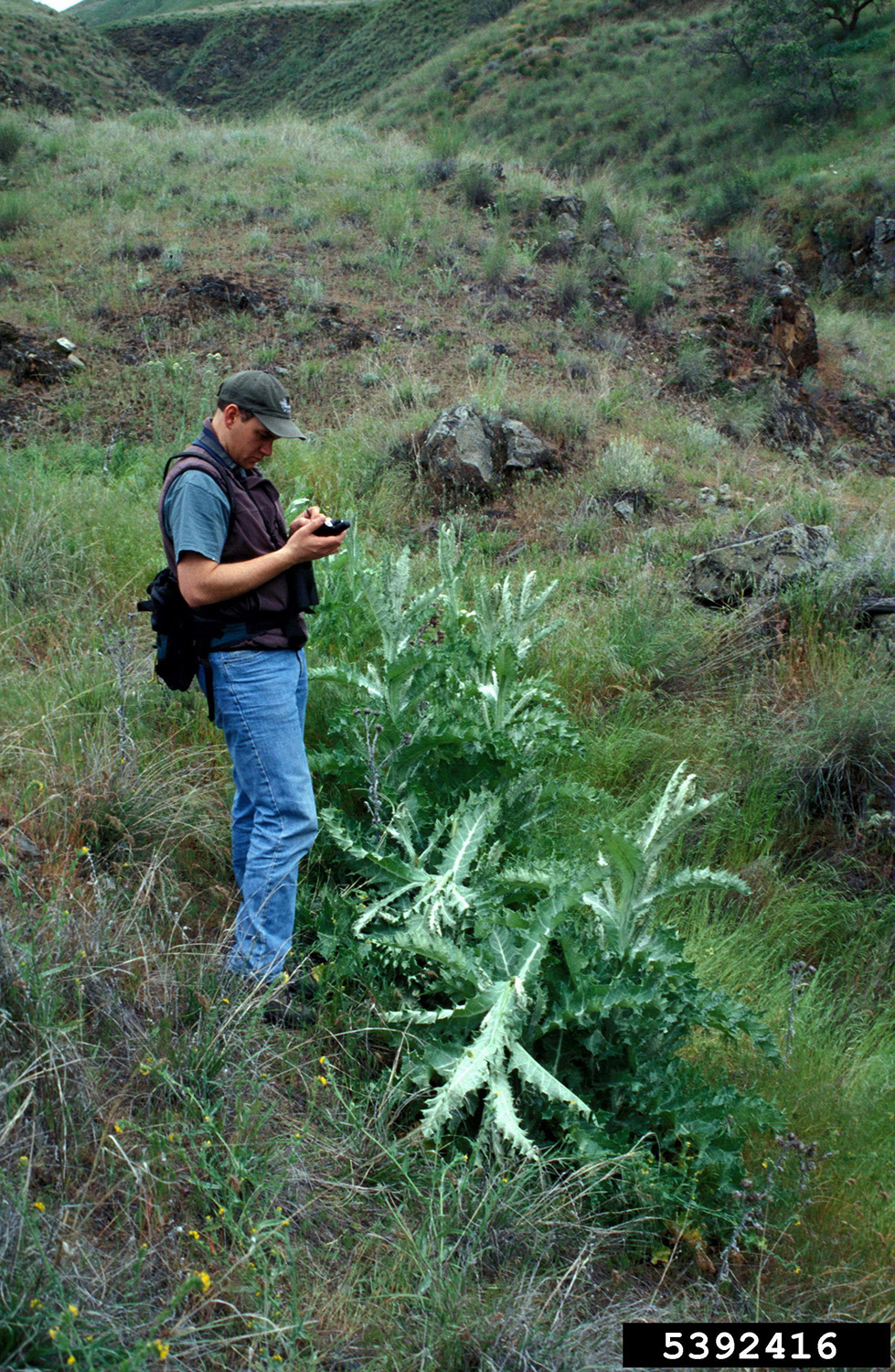 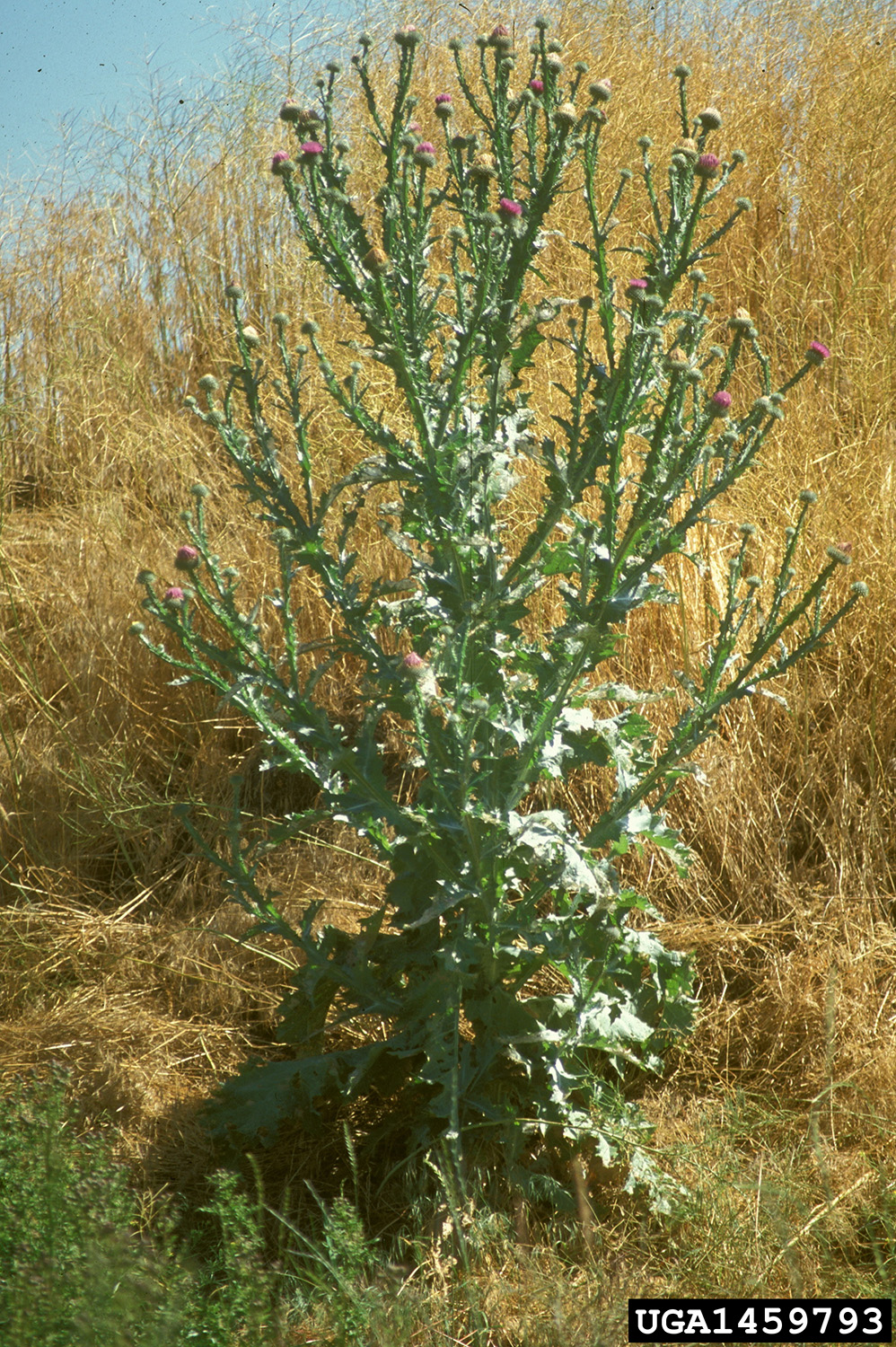 Bull, musk and Scotch thistle grow as biennials in northern states, where they emerge in the spring, grow as a rosette (i.e. a vegetative stage) the first growing season, overwinter as rosettes, then bolt and produce seed in the second spring (Figure 5). In Oklahoma—when musk and Scotch thistles germinate in the fall—they behave as cool-season annuals (i.e., germinate in the fall, overwinter as a rosette, bolt and produce seed in the spring).

Figure 5. The life cycles of biennial and annual musk thistle and the rosette and head weevils.

These thistles spread by the movement of seed-contaminated hay and wind or water dispersion into uninfested areas (Figure 6). Preventing the spread of thistles requires cooperation among neighboring landowners. Use feed and hay obtained from uninfested areas to avoid introduction into uninfested pastures. Do not allow any thistles to produce seed on or near your property. If thistles appear, immediately destroy them by cutting off their root system below ground or spraying them with herbicide before they produce seed. For established infestations, an integrated control program should be initiated. Remember, one plant can produce up to 10,000 seeds and some seeds are viable for up to nine years. 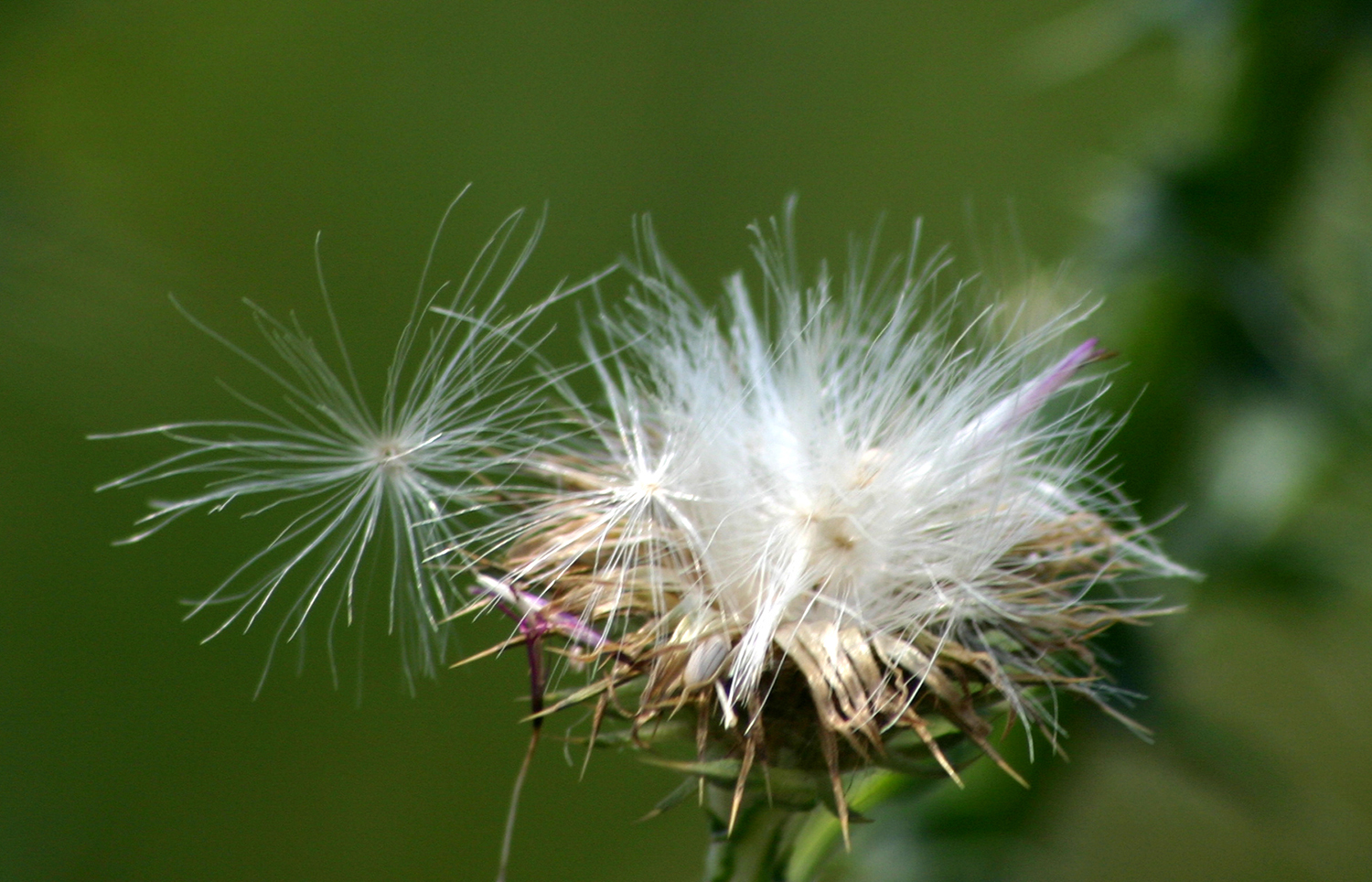 Figure 6. The flowers of musk thistle mature over several weeks each summer. Thistle seeds are easily spread by the wind due to the pappus that is attached to each seed. Photo: Wikimedia Commons.

Mechanical control involves tillage and mowing of plants before they produce seed. Individual plants can be killed with a tillage implement, hoe or spade that cuts the thistles off below the crown area. Mowing can prevent seed production, but when terminal heads start blooming, they should be mowed as close to the ground surface as possible. If the mowing height is too high, lower leaf axils could produce late-season blooms and seeds. Some flowers may still produce viable seed, even if they are mowed after they begin blooming.

The best chemical control of musk thistles in Oklahoma has been with spring applications to rosette plants in March (Table 1). If 2,4-D is used in the spring (1 to 2 quarts per acre), spray in March or early April before plants start bolting. Once plants begin bolting in April, they are more difficult to control. While 2,4-D is an inexpensive herbicide option, a second application may be required for adequate musk thistle control. Do not apply more than 4 quarts per acre (4.0 pounds) 2,4-D per year in pasture and rangelands. Other herbicides such as Grazon P+D, GrazonNext® and Weedmaster® may offer a more efficient thistles control than 2, 4-D alone. Consult the E-832, OSU Extension Agents Handbook of Insect, Disease and Weed Control for a more comprehensive list of pasture and range herbicides and their control efficiency on thistles and other weeds.

Escort®, Transline® and Vanquish® will control thistles at the rosette stage on roadsides.

Finally, all herbicide applications should be made with adequate soil moisture and when daytime air temperatures are above 60 F. Always read and follow the herbicide label and follow hay and grazing restrictions, if any. Even though bull thistle chemical control options are available, infestations are generally kept in check by biological pests of the thistles that are native to Oklahoma. Consult the local county Extension office for a more detailed herbicide recommendation (http://countyext2.okstate.edu/front-page#D).

Table 1. Herbicide recommendations for control of invasive thistles in Oklahoma.

a 2,4-D, GrazonNext®, Grazon P+D and Weedmaster® are labeled for pastures and rangelands. Escort®, Transline® and Vanquish® are labeled for non-cropland. Grazon P+D is a restricted use pesticide. Read labels for specific information and guidelines prior to using the product.
b Check your dealer for updated prices.
c Control includes killing the actively growing plant and preventing it from producing seed. Best results are obtained with spring applications, so that fall and spring emerging seedlings are actively growing at the time of treatment. B = bull thistle, M = musk thistle and S = Scotch thistle.

The thistle head weevil can reduce musk thistle populations by 90 to 95 percent in eight to 10 years after they have established. The thistle weevil larvae feed in the receptacle of developing flowers, which disrupts seed development and reduces the spread and proliferation of musk thistle. The thistle head weevils (Figure 7) overwinter as adults until early spring, when they feed on rosettes and mate. Female adult weevils can lay up to 100 eggs on the bracts of emerging flowers. The adult weevils then die. The eggs hatch in six to eight days, and the larvae feed on flower heads for 25 to 30 days before pupating in the flower head. After three to four weeks, adult weevils emerge to seek overwintering sites, but these adults will not lay eggs until spring when thistles bolt. 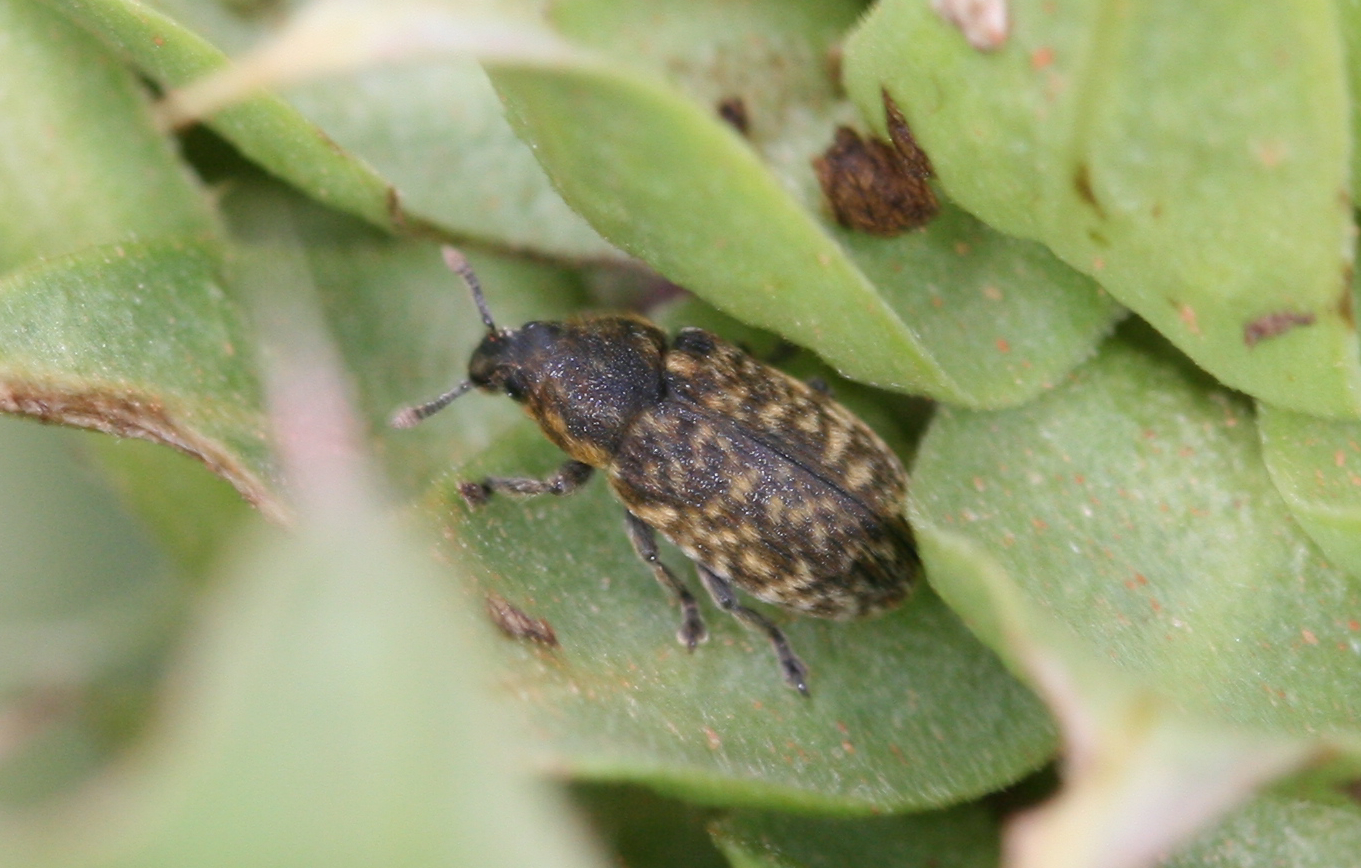 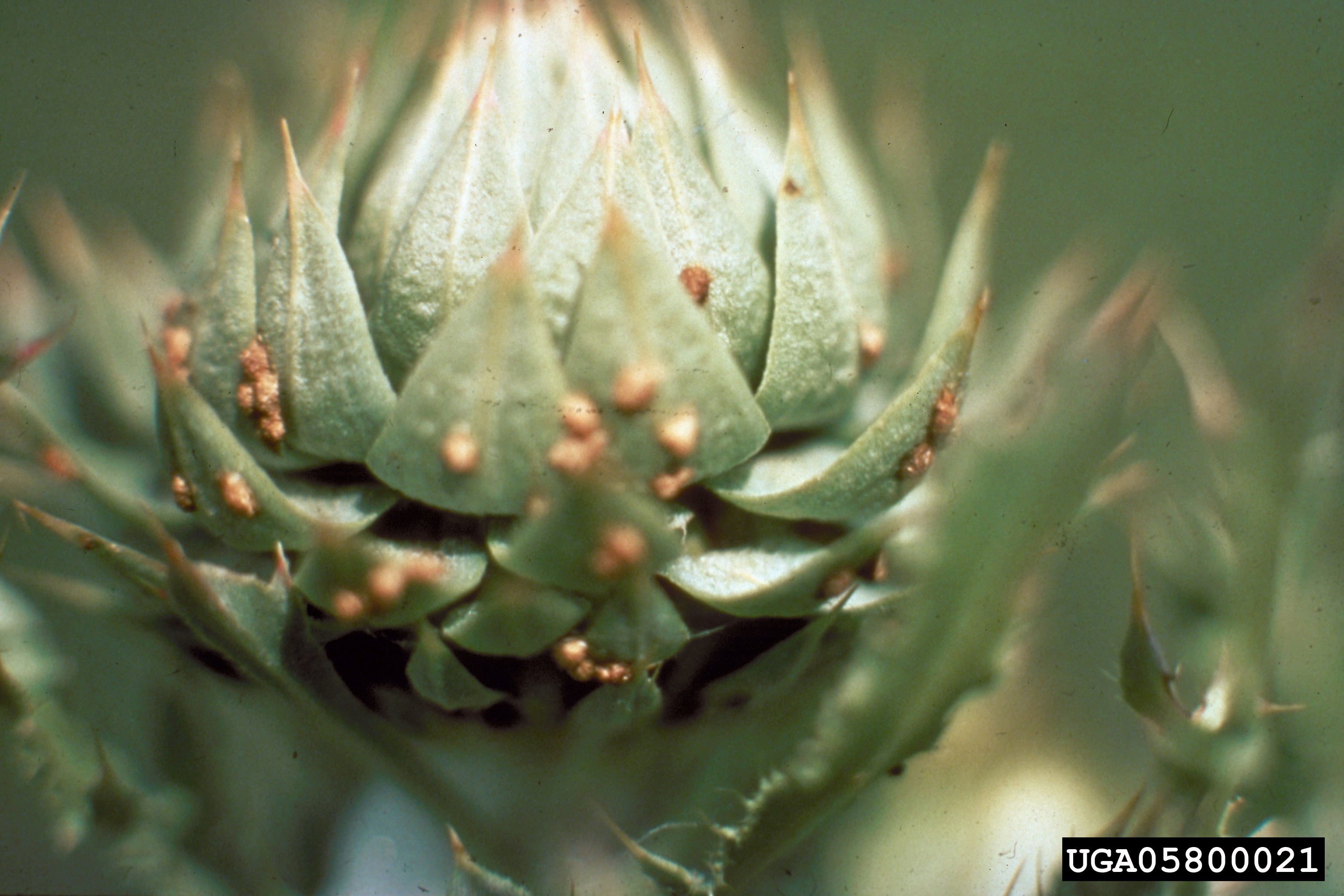 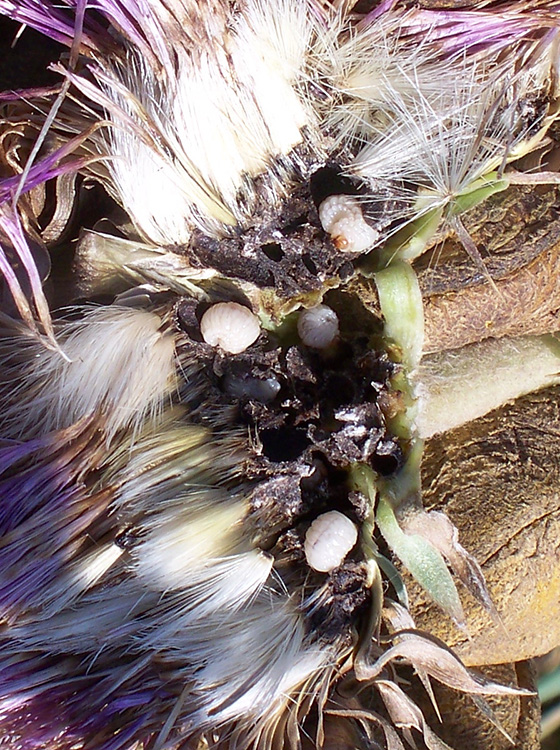 The rosette weevil can complement the work of the thistle head weevil by killing small musk thistles in the rosette growth stage. On larger plants, the rosette weevil disrupts apical dominance, resulting in shorter, multiple-stemmed and less competitive plants (Figure 8). The rosette weevil can overwinter as adults, eggs or larvae. A female begins laying up to 1,200 to 2,000 eggs on the midribs of leaves in late fall. They overwinter and resume laying eggs in the spring. Larvae hatch and feed in the center of a rosette, which can destroy the growing point. New adults emerge in early May, feed on plants and rest underground during the summer. They emerge to mate and lay eggs in early autumn. 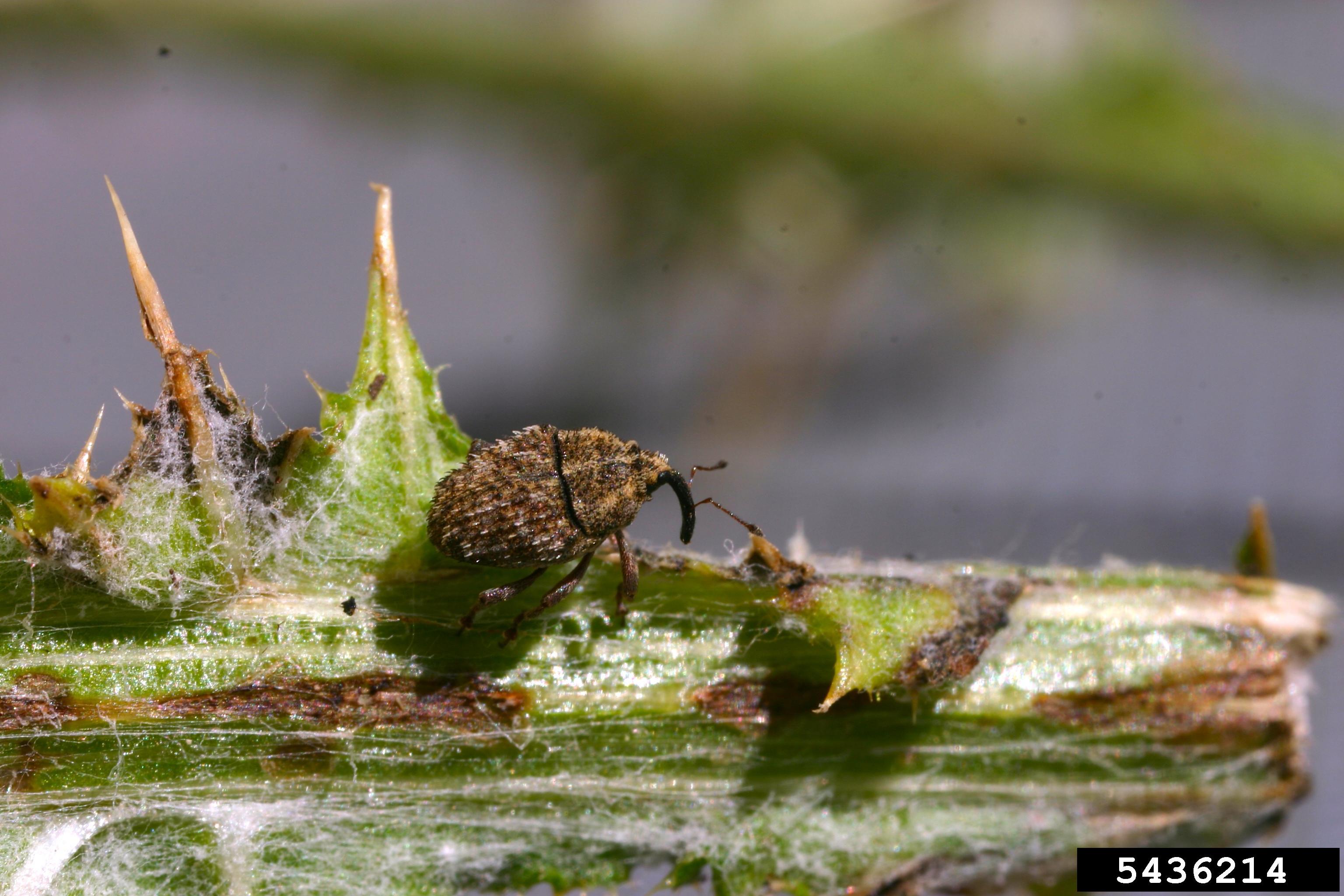 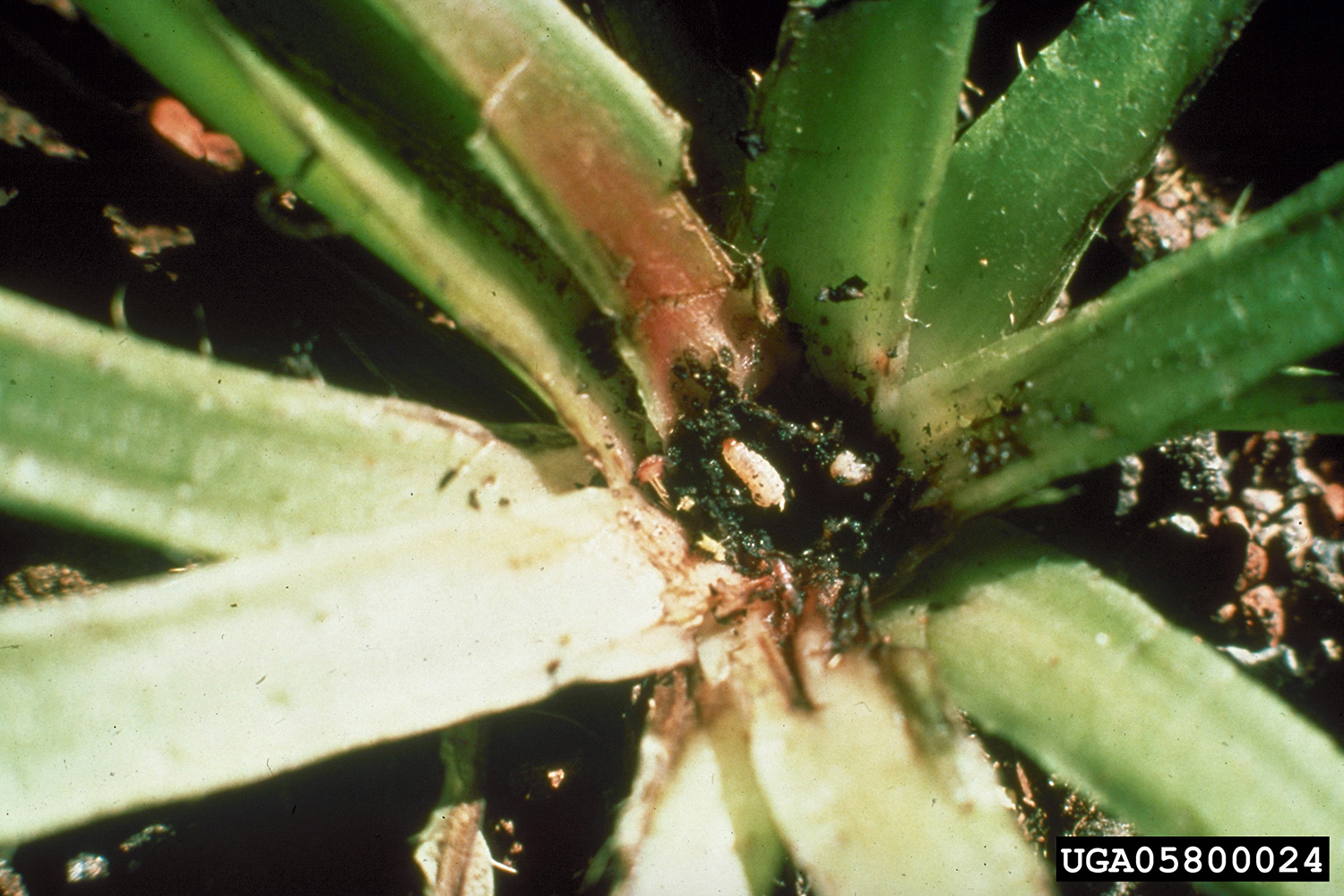 Figure 8. The rosette weevil (a) is smaller than the head weevil (See Figure 7a). Feeding of the rosette weevil can lead to less competitive, multiple-stemmed plants that produce fewer seed, or even destruction of the musk thistle growing point (b). Photos: Eric Coombs, Oregon Department of Agriculture, Bugwood.org; Loke T. Kok, Virginia Polytechnic Institute and State University, Bugwood.org

The Oklahoma Cooperative Extension Service and cooperating landowners began a program to release thistle head weevils in northeast Oklahoma in 1991. The weevils were gathered from established populations in Missouri. They have been re-distributed during one or more “weevil roundups” that are held each year, where participants learn about musk thistle control and collect weevils for release (Figure 9). To date, more than 900,000 weevils have been collected and redistributed to 670 sites in Oklahoma. 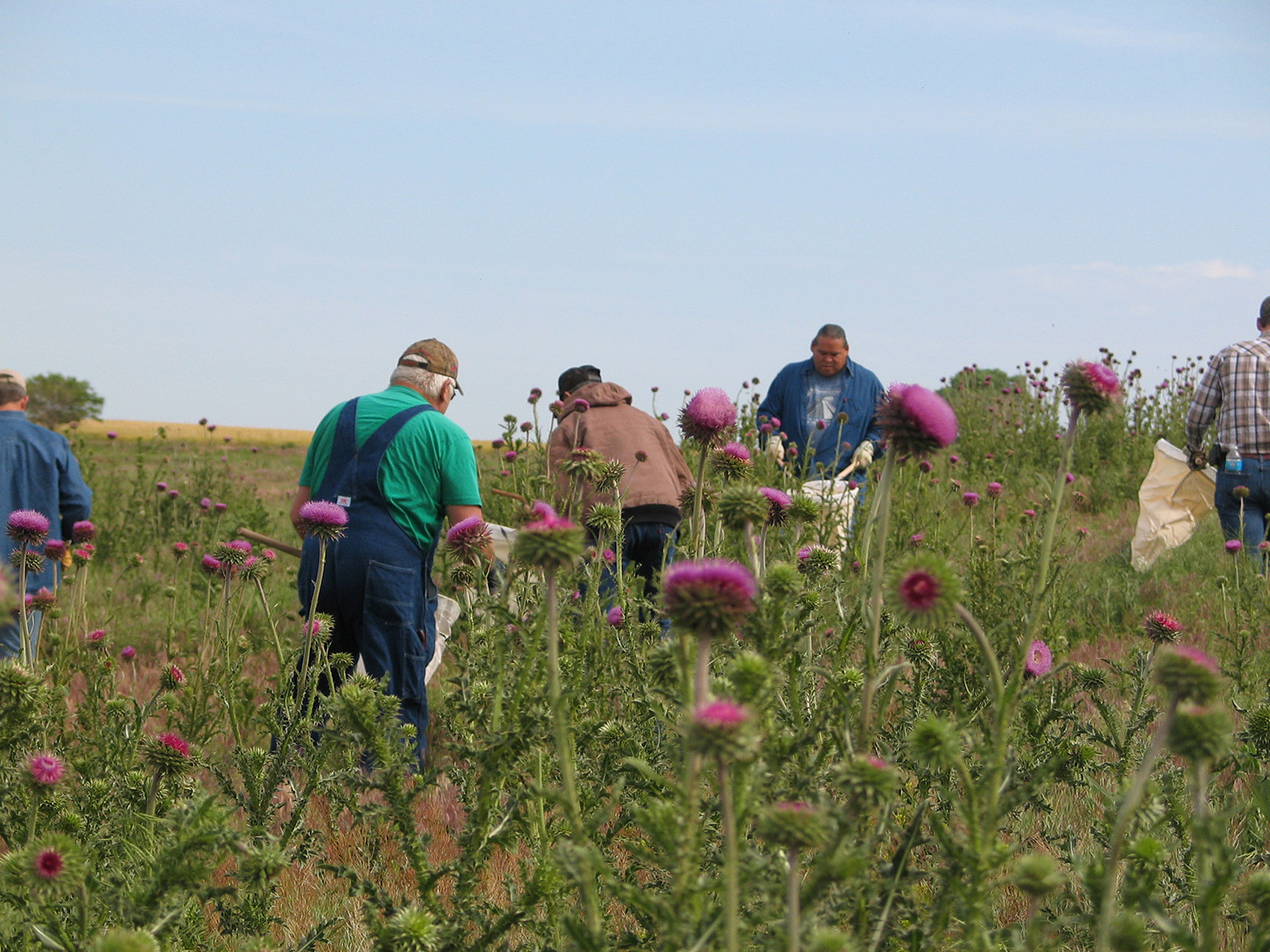 Both head and rosette weevils should be collected after musk thistle plants have bolted 1 to 2 feet (about mid-May), on sunny days when weevils are active on the upper portions of the plant. Collect weevils by beating the upper portion of the plant with a dowel rod while holding a sweep-net beneath the plant. Tap on the net occasionally to keep weevils from escaping. After collection, separate the weevils from debris, spiders and other insects.

Place 500 adult head weevils or 200 adult rosette weevils in cardboard containers with tight fitting lids and place in an ice chest. Do not use plastic cartons because they accumulate moisture, which can cause weevil mortality. Keep the weevils cooled with ice or in a refrigerator until release. Weevils should be released as soon as possible (within 48 hours) so they do not deposit eggs in the storage containers. Release a minimum of 500 head weevils and/or 200 rosette weevils at each site, sprinkling 10 weevils over a single plant. When possible, place weevils in the upwind area of large pastures or fields. Adult weevils will move with prevailing winds through the entire thistle infestation. The head weevils will begin to lay eggs once deposited, but the rosette weevils will not lay their eggs until new musk thistle seedlings emerge in the fall.

Studies show that releases are most successful in areas not mowed or sprayed and while thistles are in growth stages critical to the weevil life cycle, such as head development. When possible, release in areas free from livestock. Remember, it takes five to seven years for weevil populations to build enough numbers to control thistles. Oklahoma Cooperative Extension Service county offices hold one or more “weevil roundups” each year so participants can learn about musk thistle control and collect weevils. To learn more about any annual spring “weevil roundups” that occur in Oklahoma, contact the local county Extension office for additional information.

(Also see: L-308 Musk Thistle Management Action List)
In areas that have a heavy infestation of musk thistles, the most economical (and effective) approach is to integrate various control options. A good integrated management approach would be:

How to identify poison ivy, poison oak and similar plants.

Gardening & Lawn CareInsects, Pests, and DiseasesShrubsWeeds & Invasive Plants
VIEW ALL
Back To Top
Back To Top
©