Impact of Sensor-Based Nitrogen Management on Yield and Soil Quality

The Sensor-based Nitrogen Rate Calculated (SBNRC) developed at Oklahoma State University has been documented to increase profit of winter wheat production through either the reduction of nitrogen (N) fertilizer inputs without loss of yield or increase in grain yields with increased inputs. The technique utilizes the GreenSeeker™ sensor, which records NDVI, to measure a high nitrogen strip (N-Rich Strip) placed in the field, pre-plant and an adjacent area representing the farmer practice. These values are then put in an algorithm that provides an estimate of potential yield and a field-specific nitrogen rate recommendation. To date the studies reported were established and concluded over a period of three years or less. Prior to this project there was no documentation on the long term impact of using this technology for increased yields, net returns and soil quality. This report examines a study that was established in 2004 designed to evaluate the sensor-based technologies and typical yield goal based management practices. The study consists of five treatments replicated three times; check, N-rich strip, Yield goal all pre-plant, Yield goal 50/50 split, and 45 lb N ac-1 pre-plant + SBNRC. The regional yield goal is 45 bu ac-1 which, according to Fact Sheet PSS-2225 (Zhang et al 2009), should receive 90 lbs N ac-1 annually. The 2012 winter wheat harvest marked the 8th crop harvested. Nitrogen application rates, grain yield and nitrogen use efficiency were analyzed across years along with soil properties such as percent organic matter, surface and sub-soil nitrate levels. 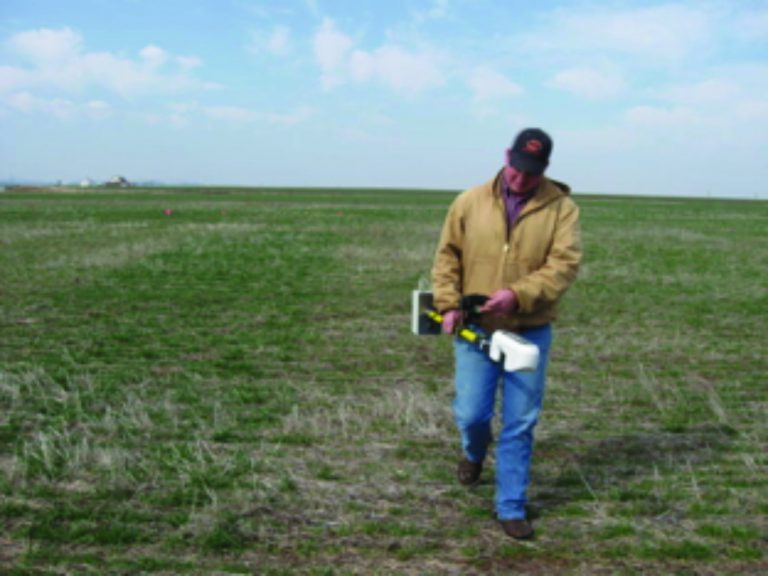 Figure 2. Farmer next to an N-Rich Strip, being sensed with a GreenSeeker™ sensor.

When comparing yield levels and return of the SBNRC method and 45/45 split on a year-by-year basis, the yield of the SBNRC was statistically greater once, lower once and equal to the 45/45 split during the four years. The economic return from the SBNRC plot was greater two years and equal for the 45/45 split the other four. Comparing the SBNRC to the 90 lbs N preplant treatment showed no significant difference in yield or return on an annual basis over the six years.

During the six cropping seasons, the SBNRC applied 166 lbs less N than the two producer standard treatments (Table 2). The 90 lbs preplant treatment recorded the highest total grain yield with a six year sum of 292 bu ac-1, the SBNRC treatment produced 283 bu ac-1, and the split application produced 277 bu ac-1. While the 90 lb preplant plot made the most grain numerically there was no significant difference between the yields of the three treatments.

During the eight years this study was conducted, plots were never moved. For example, the check had not received N fertilizer since 2004. Soil samples were collected after 2012 to a depth of 3 feet. Results of the 0- to 6-inch samples are reported in Table 3. There was no significant difference in total N, organic carbon, or soil organic matter level. The nitrate (NO3) level of the Check was significantly lower than the other treatments, while the split application was significantly higher. Below the 6-inch sampling depth, there was no significant difference in NO3 levels of any treatment. This is extremely important if you consider that during the eight years of the study, 960 lbs of N ac-1 was applied to the N-Rich strip and no N had been applied to the check. The question must be asked “Where did the N go?” The answer is likely one of nitrogen’s many pathways of loss; leaching, identification, volatilization or plant loss.

After eight years of continuous management, there was no significant difference in average grain yield or cumulative grain yield of plots receiving the traditional producer fertilizer rate or the sensor-based nitrogen rate.  In addition, there was no significant difference in the levels of residual nitrogen or organic matter, supporting that the use of the sensor technology will not deplete soil reserves but in fact greatly reduce the amount of nitrogen being lost to the environment.