Impact of Revised Section 199A on Grain Producers

The Tax Cuts and Jobs Act of 2017 (TCJA) created a number of changes to the tax code that impacted agricultural producers and agricultural cooperatives. One aspect of the provision, Section 199A was controversial and led to a revision. This process has led producers to wonder whether the tax implications should influence their decisions for delivering grain at harvest. The short answer is – probably not. To fully explain the issue, it is necessary to briefly discuss the tax reform provisions, including the elimination of the previous Section 199 deduction and the newly redesigned Section 199A deduction.

Key Aspects of the Tax Cuts and Jobs Act

TCJA included several tax changes including: (1) A reduction in the corporate tax rate, (2) Elimination of the Domestic Production Activities Deduction or Section 199 and (3) A new tax deduction labeled Section 199A. Section 199A provided tax benefits for pass-through entities including agricultural cooperatives. The original Section 199A language in the TCJA became controversial because it raised the possibility that a producer who marketed commodities through a cooperative might receive greater tax benefits compared to one who sold to an investor-owned corporation (see AGEC-1073 Impacts of Tax Reform on Agricultural Cooperatives, Briggeman and Kenkel, 2018). Due to that issue, which was often described as “The Grain Glitch,” a revision to the Section 199A Deduction was included in the March 23, 2018 omnibus spending bill.

As background, it is useful to understand the basic concept of cooperative taxation. For federal income tax purposes, a cooperative computes its income similar to any other taxable corporation except that it can exclude certain distributions of members’ profits (which is termed patronage refunds) from taxable income. Cooperative members include those distributed profits in their taxable income. This creates a pass-through taxation structure. Due to that structure, cooperative firms do not substantially benefit from a reduction in the corporate tax rate. Because the TCJA reduced the tax rates for most corporations from a top rate of 35 percent to 21 percent (a 40 percent reduction), cooperative firms argued that the act should contain some provision for pass-through taxation entities in order for the act to avoid creating a disparity between cooperatives and investor-owned agribusinesses. In particular, the cooperative industry argued that the Section 199 deduction should be retained for cooperative firms.

The Section 199A Deduction

The TCJA eliminated the Section 199 deduction for most firms to partially offset the revenue loss from the reduction in the corporate tax rate. In recognition of the fact that TCJA did not benefit cooperatives or their farmer members, the act created the Section 199A deduction, which was subsequently amended. The revised Section 199A language eliminated the partial deduction on profits or commodity payments that producers received from a cooperative. Therefore, it eliminated the most controversial provision. Some people viewed this as creating a disparity between cooperative and investor-owned agribusinesses.

All producers farming as pass-through businesses which include sole proprietorship, partnership, LLC or S-corporations can receive a business deduction equaling 20 percent of their net income from commodity sales, but not exceeding their taxable income. The deduction is restricted when the taxable income exceeds $157,000 for individuals or $315,000 on a joint return. If the producer markets commodities through the cooperative, the 20 percent deduction is reduced by the lesser of 9 percent of the producers qualified business income or 50 percent of the W-2 wages paid by the farmer to employees who help produce qualified commodity sales.

Table 1. Analysis of Section 199A Effect on Producer Delivering Grain to a Cooperative.

Comparison for Producers Marketing Commodities through Cooperatives or Independents

As discussed, agricultural producers operating in any structure other than a C-corporation receive a 20 percent deduction on their income from commodity sales subject to taxable income limits. Producers who market commodities through a cooperative face both a possible reduction in their 20 percent deduction and a possible increase in their deduction because of the cooperative passing through some 199A deduction. The advantage or disadvantage of marketing commodities through a cooperative depends on the balance of those effects.

A valid comparison can be made by using the best information on a representative cooperative and representative producer. The most recent (2016) USDA Agricultural Cooperative Statistics can be used to determine the sales, margin, labor expense, local savings and potential Section 199A pass-through for the “average” grain marketing cooperative.  The most recent (2013) Economic Research Service report on wheat production costs can be used to determine the total revenue, W-2 wage expense and yield of an average wheat farm in the Southern Plains. That data makes it possible to make all the necessary calculations for the Section 199A deduction and patronage at the cooperative level and the possible tax deduction offset at the producer level. Table 1 shows these effects on a per bushel basis, which provides a very simple and understandable comparison.

Cooperative delivering producers who have W-2 wage expense of less than $0.15 per bushel ($4.79 per acre at the assumed average yield of 39 bushels per acre) would face a lower reduction in their Section 199A 20 percent deduction. A producer with no W-2 wages would maintain the full 20 percent deduction and any Section 199A pass-through or patronage from the cooperative would place them at an advantage over an independent delivering producer. Conversely, producers with higher W-2 wages would have a greater potential reduction in their 20 percent deduction and a greater need of a Section 199A pass through and patronage from the cooperative in order to maintain equivalence with the independent delivering producer. The prevalence of grain farms with sufficient W-2 wages to face the full potential offset to their 20 percent pass through deduction is addressed in a subsequent section.

Farmers with high W2 wages tend to be large, non-corporate producers. According to the Kansas Farm Management Association (KFMA) data on Kansas agricultural producers, each year since 1980, about 20 percent of Kansas producers had high wages. Figure 1 shows the distribution of producers ordered by their 50 percent to hired labor expense:net farm income ratio. While this is a proxy for the actual calculation, i.e. all labor is assumed to be paid as a W2 wage and net farm income is the qualified business income, one can gather some additional insights. These high wage producers had an average total labor expense equal to about $75,000. On average, these operations had nearly $1 million in value of farm production, over $4 million in assets and nearly all qualified for the Section 199A deduction (only 11 percent were C-Corporation farmers). 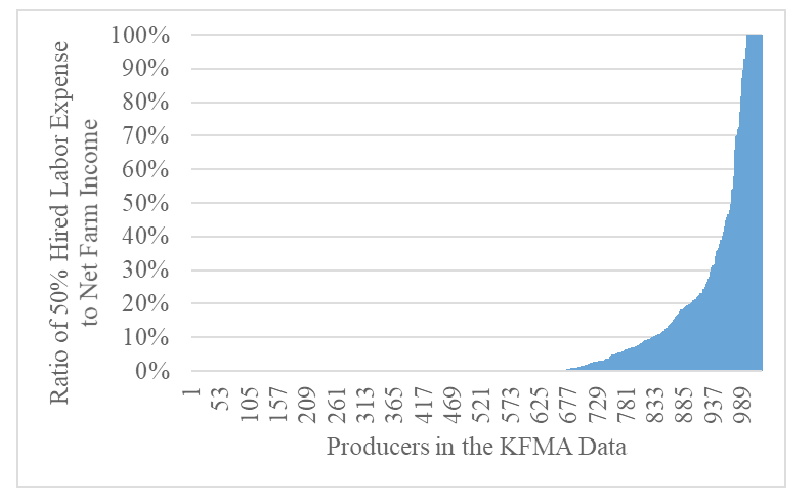 Historically, producers have not known the eventual patronage distribution at the time they make the decision to deliver grain to a cooperative elevator. Those patronage benefits are part of being an owner in the cooperative, and ownership benefits are always dependent on profitability. The tax reform process created another distribution, the Section 199A pass-through, which also cannot be determined at the time that grain is delivered. These results suggest that the tax difference between delivering to a cooperative or independent elevator is likely to be relatively small. Cooperative boards of directors are likely to make decisions on Section 199A pass through such that most cooperative members will be equivalent or better off by continuing to patronize the cooperative. Producers should consider the entire value package as they make decisions on where to market commodities. In general, it does not appear that the Section 199A tax effect should be a major factor in that decision.

An overview of commodity, conservation, crop insurance and disaster assistance.

The basic types and characteristics of water under Oklahoma’s water law.

The process, as well as objectives and qualifications for species to be part of the Endangered Species Act.

Ag Law, Taxes, & InsuranceAg Policy & RegulationsHabitat ManagementWildlife
VIEW ALL
Back To Top
Back To Top
©