Italian ryegrass (Lolium perenne L. spp. multiflorum (Lam.) Husnot), also known as ryegrass, annual ryegrass or Marshall ryegrass, is a winter annual grass weed commonly found in winter wheat fields throughout Oklahoma. It is competitive with winter wheat for moisture and nutrients and can cause substantial reductions in yield and grain quality when not adequately controlled. Italian ryegrass densities of 15 plants per square foot have been found to reduce wheat grain yields in Oklahoma by 20 percent and wheat grain total price discounts by 9 cents per bushel (Fast et al. 2009). Italian ryegrass also is a prolific seed producer, capable of producing several thousand seeds per plant. Furthermore, Italian ryegrass is an especially important problem in Oklahoma wheat production due to the widespread presence of herbicide resistant ryegrass populations. 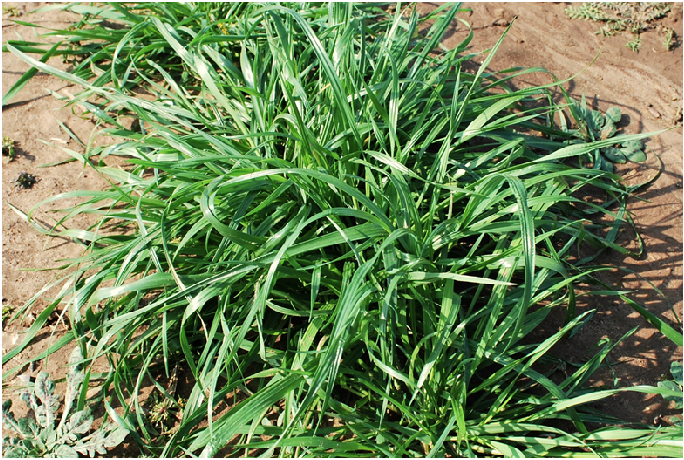 Italian ryegrass is a winter annual weed with a similar life cycle to winter wheat. It can grow up to 39 inches tall. It has a leaf blade and sheath that are smooth and often shiny (Figure 1); has a short, membranous ligule (Figure 2) and auricles present (Figure 3). Leaf sheaths are often tinged red at the base. The inflorescence of ryegrass is a slender spike about 4 to 16 inches long, contains five to 38 spikelets arranged alternately on the flowering stem and has fine awns (Figure 4). 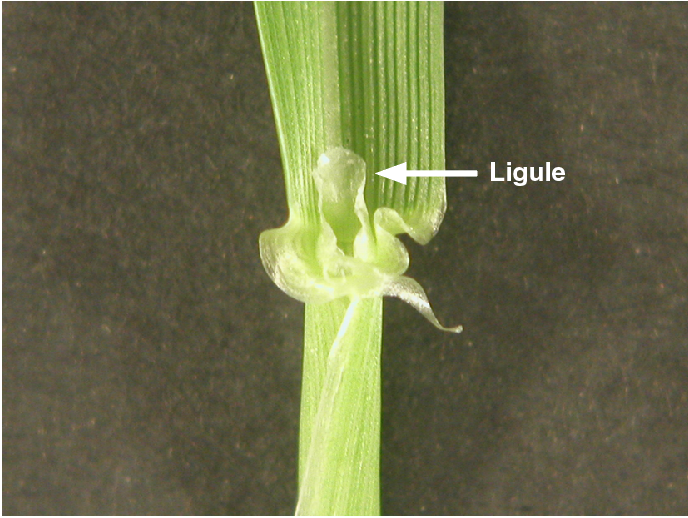 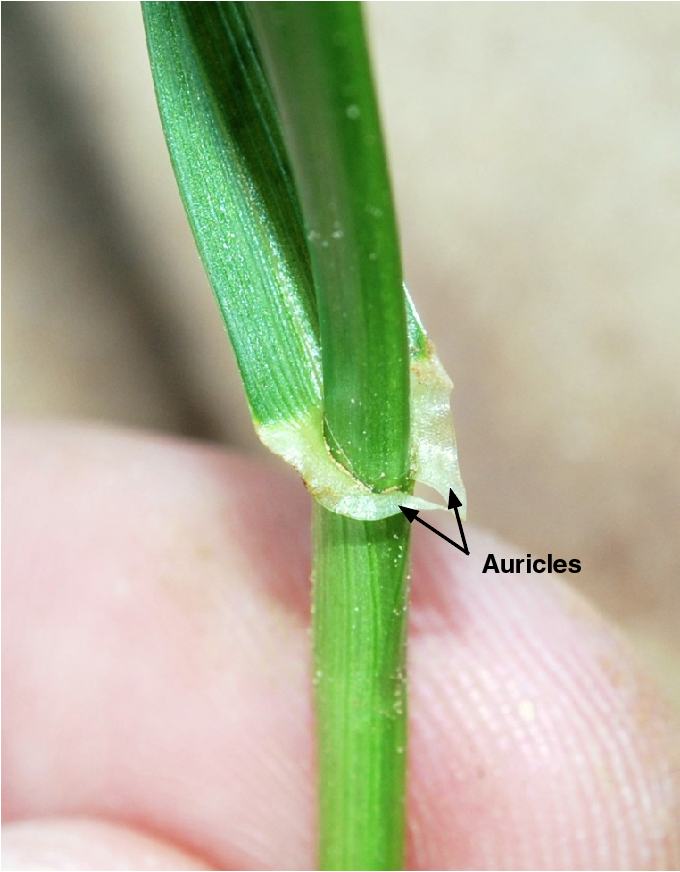 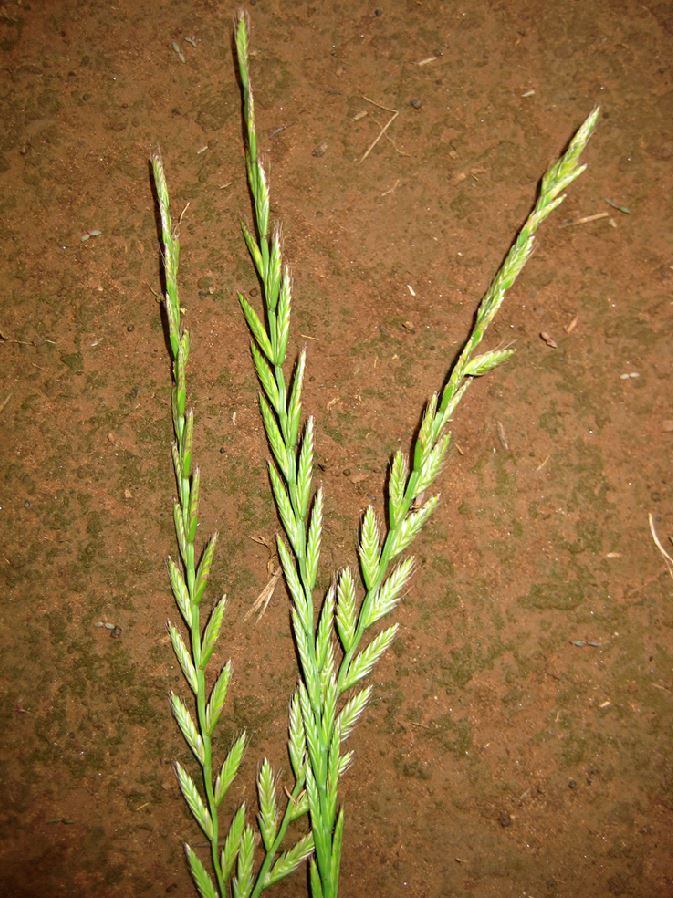 Proper management of a crop is one of the most economical ways to manage weeds. Selecting and planting competitive wheat varieties that suit a given area is a critical first step. It also is important that planted seed and equipment are clean of weed seed. It is impossible to get ahead of weed control when the clock is set back each year with the spread of new ryegrass seed that enters fields via contaminated equipment or seed. Fertility and soil pH management also are critically important to consider when managing ryegrass. At low pH (< 6), ryegrass often outcompetes wheat. Wheat is able to better compete with ryegrass in suitable soil pH levels (6 to 7). Refer to PSS-2142 Wheat Variety Comparison Chart for information on tolerance to low soil pH and E-1039 Oklahoma Soil Fertility Handbook for fertilization recommendations. Additionally, more about soil pH and herbicide interactions can be found in fact sheet PSS-2788, How Does Soil pH Impact Herbicides?

Other cultural strategies that can aid in Italian ryegrass management include tillage, crop rotation and burning. Variable tillage strategies can be implemented to manage ryegrass. Occasional deep tillage may bury seeds, but it can take up to seven years for seeds to stop germinating. If adequate time is available before planting, shallow tillage may be used to encourage seeds to germinate, then promptly sprayed with an appropriate herbicide or additional tillage event. The latter option gives leeway to incorporate different mode of actions than those typically used during the wheat growing season. The incorporation of additional herbicide modes of action also may be advantageous in managing herbicide resistant Italian ryegrass biotypes. Rotating into summer dicot crops, such as cotton or soybean, offer a similar advantage in regards to herbicide rotations. Other favorable rotations are canola, sunflower, sesame, corn or alfalfa. Burning crop residue requires strict favorable conditions and runs the risk of the fire escaping the planned burn area. However, burning removes the risk of selecting for herbicide resistance and can be utilized in no-till or minimal-till systems. Balancing and integrating these three types of cultural control into a weed management system can provide diverse options to control Italian ryegrass as well as other weeds.

In many instances, a herbicide program will need to be implemented to reduce in-season ryegrass competition with wheat and to minimize ryegrass seed production. Proper selection of a herbicide program is critical to ensure effective and efficient ryegrass control. Italian ryegrass resistant to ALS herbicides such as Finesse® Cereal & Fallow, PowerFlex® HL and Beyond®, is present in at least 17 counties in central and eastern Oklahoma. To effectively control Italian ryegrass post-emergence, many producers have relied on Axial® XL (Group 1 – ACCase Inhibitors), a different herbicide mode of action than the ALS inhibiting herbicides (Group 2). However, as more and more Axial® XL is used each year, there is concern that resistance has developed in Oklahoma. Preliminary greenhouse screens of plants from north-central Oklahoma have identified plants that have an increased tolerance to Axial® XL compared to wild type populations; however, true resistance has not been identified. Fortunately, there is an additional herbicide mode of action (Group 15 herbicides – seedling shoot growth inhibitors) that is labeled for use in wheat and is capable of effectively controlling Italian ryegrass. Herbicides in this group include Zidua®, Anthem Flex®, and Axiom® DF. In Oklahoma winter wheat, these three herbicides are applied delayed emergence (DPRE), which is defined when 80 percent of germinated wheat seeds have a shoot at least ½-inch long until wheat spiking.

To evaluate the efficacy of these products on ryegrass control, herbicide systems were evaluated in Perkins during the 2016-17 and 2017-18 winter wheat growing seasons. In 2016-17, the site was conventionally tilled, while in 2018, the field was left in no-till. The wheat variety Gallagher was planted during both site years. Treatments included herbicides applied at the DPRE and/or mid-postemergence (MPOST) timing. Delayed preemergence applications were made when wheat was spiking. Mid-postemergence applications were made in the early spring prior to the emergence of the third tiller for Italian ryegrass.

In both years, the highest levels of Italian ryegrass control were achieved with systems that contained Zidua® or Axiom® DF at the DPRE timing and/or Axial® XL at the MPOST timing (Table 1). In conventionally tilled ground in 2016-17, all systems containing Zidua®, including Zidua® alone at the DPRE timing, provided excellent control of Italian ryegrass. However, in 2017-18, no rain was received until 37 days after application, resulting in delayed herbicide incorporation, and subsequently, a reduced level of ryegrass control. As a result, the top performing herbicide systems in 2017-18 were those that included a postemergence herbicide at the DPRE or MPOST timing. Residue present in 2017-18 also likely contributed to decreased levels of ryegrass control. For example, the Zidua® label states that activity from the herbicide may be reduced if residue on the soil surface covers more than 25 percent of the application area. In this study, more than 25 percent cover was present.

Table 1. Selected herbicides labeled in winter wheat and their efficacy on Italian ryegrass control and seed rain in the 2016-17 and 2017-18 growing seasons.

Italian ryegrass is best managed with an integrated system consisting of multiple management strategies. In Perkins during the 2016-17 and 2017-2018 seasons, several successful herbicide systems were identified. Wheat response to these products was minimal during both seasons and no wheat response was detected after spring green up. However, wheat response and ryegrass control is highly influenced by planting depth, application timing, herbicide rate, soil type and rainfall following application. Proper planting depth and timely rains aided in the success of several treatments in 2016-17. Conversely, the lack of a timely rain during the 2017-18 season and presence of residue hindered Italian ryegrass control in 2017-18, particularly for Zidua® and Axiom® DF applications.

The cultural weed management section of this fact sheet was adapted from documents originally created by Lyon et al. in ‘Italian Ryegrass Management in Pacific Northwest Dryland Cropping Systems East of the Cascades.’