Grain Bin Entrapment: Don’t Let It Happen To You!

People may be trapped or caught in grain in a matter of seconds. There are three ways this can happen: entrapment in flowing grain, collapse of a grain bridge and collapse of a vertical wall of grain. All three involve moving or flowing grain. Anyone working in the grain industry must know how these incidents happen and be prepared to prevent or respond to the situation. Keeping grain in good condition also plays a significant role in preventing these catastrophic incidents. When grain flows freely through unloading systems, workers have little need to enter bins.

EXTRA PRECAUTION: Never allow children to play in or around grain bins or gravity wagons!

During unloading, the grain in a bin flows downward from the top center of the bin, creating a “funnel” effect that draws material and objects down to the conveyor at the bottom of the bin (Figure 1). An unloading auger at the bottom of the bin transports the grain outside. It only takes two to three seconds to become helpless in flowing grain. With the trend toward moving grain faster, entrapment happens much faster than a victim can react. Flowing grain acts like quick sand and can pull a worker under, causing suffocation. This can also happen inside a gravity wagon. 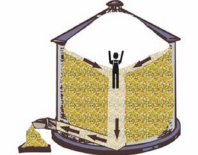 Figure 1. Entrapment can occur quickly while an unloading auger draws grain from the center of the bin, forming a surface cone as the bin is emptied.

Collapse of a Grain Bridge

A grain bridge can form when grain on the surface is moldy or frozen together to form a hard, thick crust. When grain is unloaded from a bin with a surface crust, a hollow cavity forms underneath the grain bridge (Figure 2). If an individual enters the bin and attempts to walk on the crusted surface, the additional weight will cause the crust to collapse and the individual could be partially or completely submerged instantly. The shifting grain can move the victim four to five feet from the point of entry where the victim was last seen, making it difficult to determine exactly where the victim is located.

Figure 2. Grain can form a hard crust, which appears to be firm enough to walk on. However, the crust can break and instantly bury an individual in the hollow cavity that formed underneath the bridge.

Avalanche of a Vertical Grain Wall

Figure 3. If broken up from below, a steep wall of grain can break free, causing an avalanche that could bury workers inside the bin.

Figure 4. When entering a bin, always use a harness with a lifeline system. Never work alone. Have a partner on the outside of the bin that is in contact with the person entering the bin. (courtesy of the Grain Handling Safety Coalition: Grain Safety).

For the emergency responders and rescuers: