Foliar diseases that attack the leaves are often observed on soybeans grown in Oklahoma. These diseases are caused primarily by fungi and bacteria. The damage caused by foliar diseases is mostly of minor importance. However, some diseases such as frogeye leaf spot and soybean rust can reduce yields when they develop early in crop development and weather conditions favor disease development.  Correct identification and early detection are critical in the proper management of soybean diseases. This fact sheet is intended to aid soybean producers in recognizing the diseases that commonly attack soybean foliage. Diseases and nematodes that attack seedlings and roots are described in Extension Fact Sheet EPP-7660, and disease that attack stems and pods are covered in EPP-7662. Help in disease diagnosis can be obtained by submitting samples to the OSU Plant Disease and Insect Diagnostic Laboratory through local Cooperative Extension offices.

Bacterial blight is the most common bacterial disease of soybeans. This disease rarely causes yield loss, but it occasionally causes defoliation. Bacterial blight is favored by cool rainy weather, and is generally more prevalent early in the growing season. Dry and hot weather slows the development of this disease. Initial infections may occur during seedling emergence, with secondary disease outbreaks often following windy rainstorms or crop cultivation while the foliage is wet.

Foliar symptoms begin as small, water-soaked spots that turn yellow and then dark brown to black with a yellow border (Figure 1). The spots often coalesce to form irregular brown patches. Portions of the infected area may fall out, giving the leaves a ragged appearance.

Control is obtained by planting disease-free seed, ro- tating crops, and avoiding cultivation during times when the soybean foliage is wet. 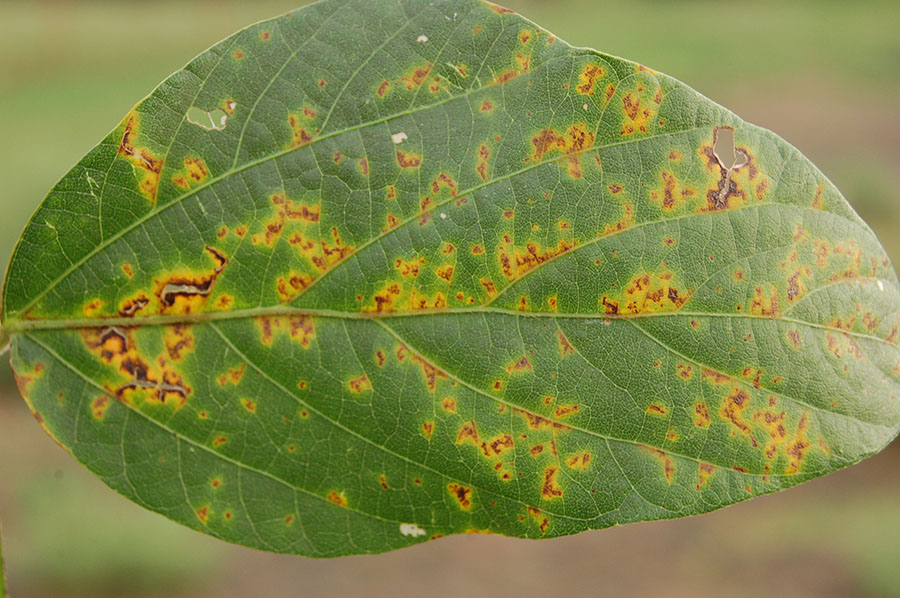 Symptoms of bacterial pustule consist of small yellow spots with reddish-brown centers (Figure 2). Later, in the center of the spots, a small raised pustule develops, which is most noticeable on the under-side of the leaf. Infections are common on younger leaves which are more susceptible than older leaves. Bacterial pustule is easily mistaken for soybean rust, a potentially more damaging disease. 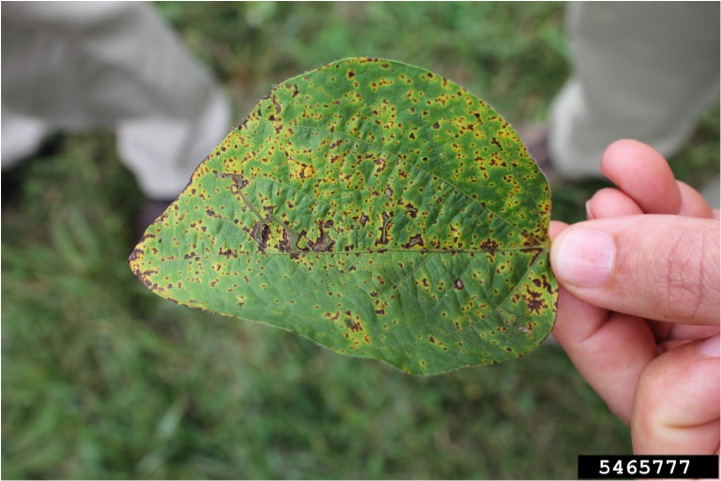 Brown spot is the most common foliar disease of soybeans in Oklahoma. The disease is caused by a fungus that is spread by splashing rain. It frequently occurs following rainy periods early in the growing season, but rarely increases during late season.  Hot, dry weather limits the development of this disease. If conditions favorable for disease development continue into the season or reoccur before maturity, the resulting defoliation can cause yield loss.

The first unifoliate leaves and lower trifoliate leaves typically show symptoms of brown spot. The reddish brown lesions vary in size from pinpoint to 1/4 inch in diameter, but may merge and form larger irregular shaped spots (Figure 3). Severely infected leaves turn yellow and fall from the plant. Defoliation begins in the lower canopy and moves upward as the disease progresses.

Incidence of this disease is reduced by managing soybean crop residue, rotating crops (at least 1 year out of soybeans), and planting high quality seed. Fungicide applied to foliage during reproductive stages of crop development typically does not provide good control of brown spot because the disease develops earlier in the growing season. 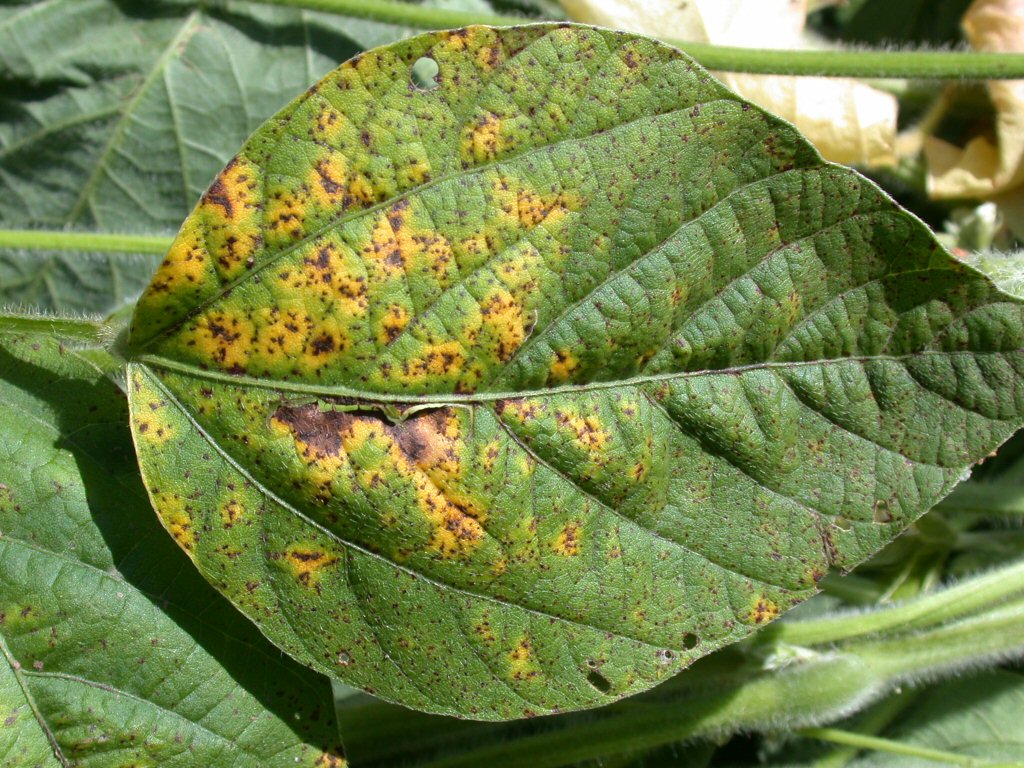 Downy mildew appears on the upper surface of young leaves as pale green to light yellow spots. As the spots enlarge, they become pale yellow and of irregular size and shape (Figure 4). During periods of high humidity, a white to tan colored tuft of moldy growth often develops on the undersides of the spots. The spots eventually turn tan in color as they die. Rarely does downy mildew progress to levels high enough to cause defoliation.

Because the damage from downy mildew is mostly cosmetic, management practices are not required. 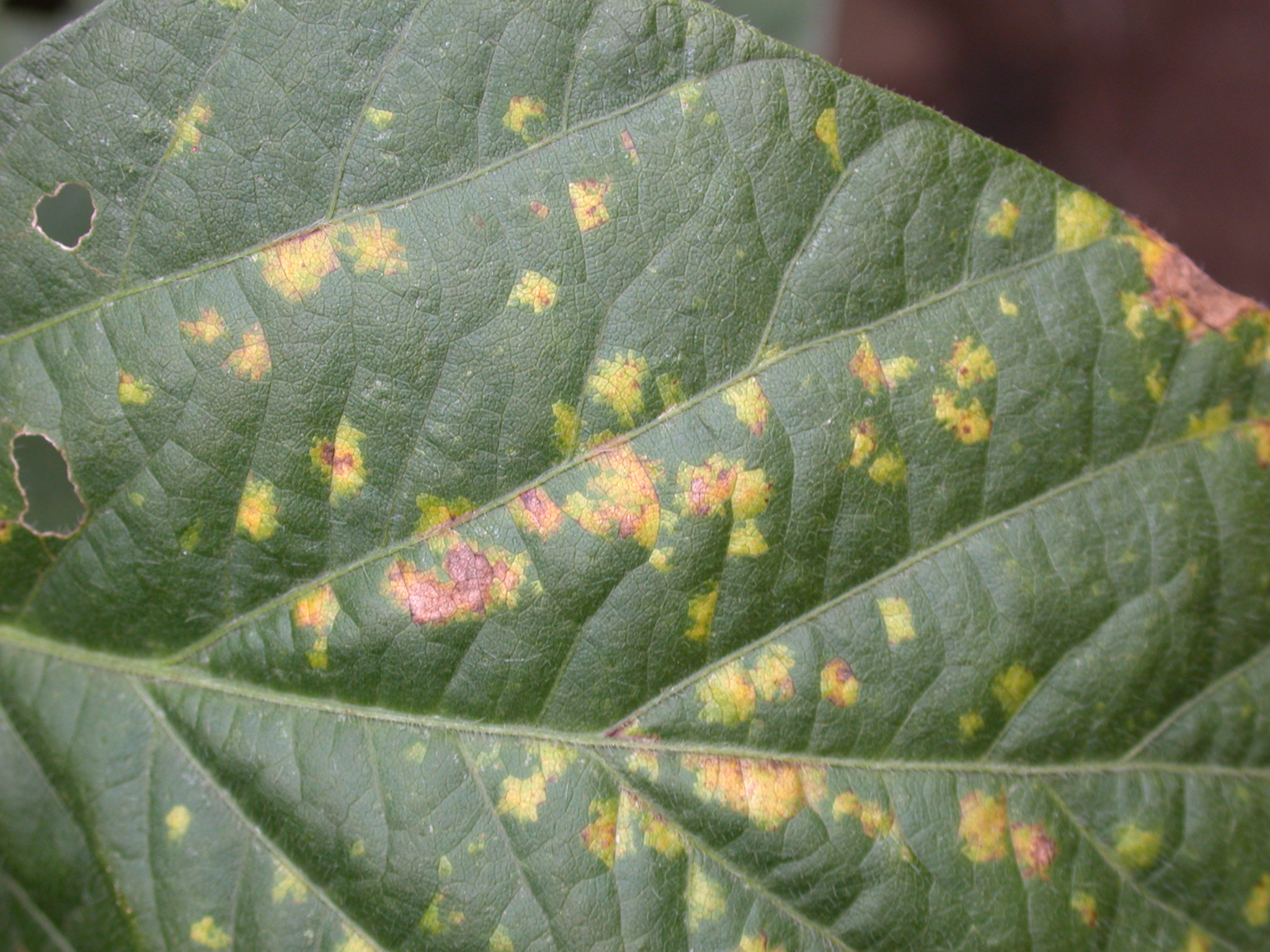 Frogeye leaf spot is a foliar disease of soybeans that has the potential to cause significant yield loss. This disease is most severe during seasons with frequent rainfall and long periods of high relative humidity.

Spots develop on the upper surface of leaves that measure up to 1/4 inch in diameter, but may coalesce to form larger spots. Young, fully developed spots have a gray to brown center with a distinct purple to reddish-brown margin (Figure 5). As lesions age, the center becomes tan to nearly white, and the margin darkens. Severe levels of disease cause blighting of foliage. 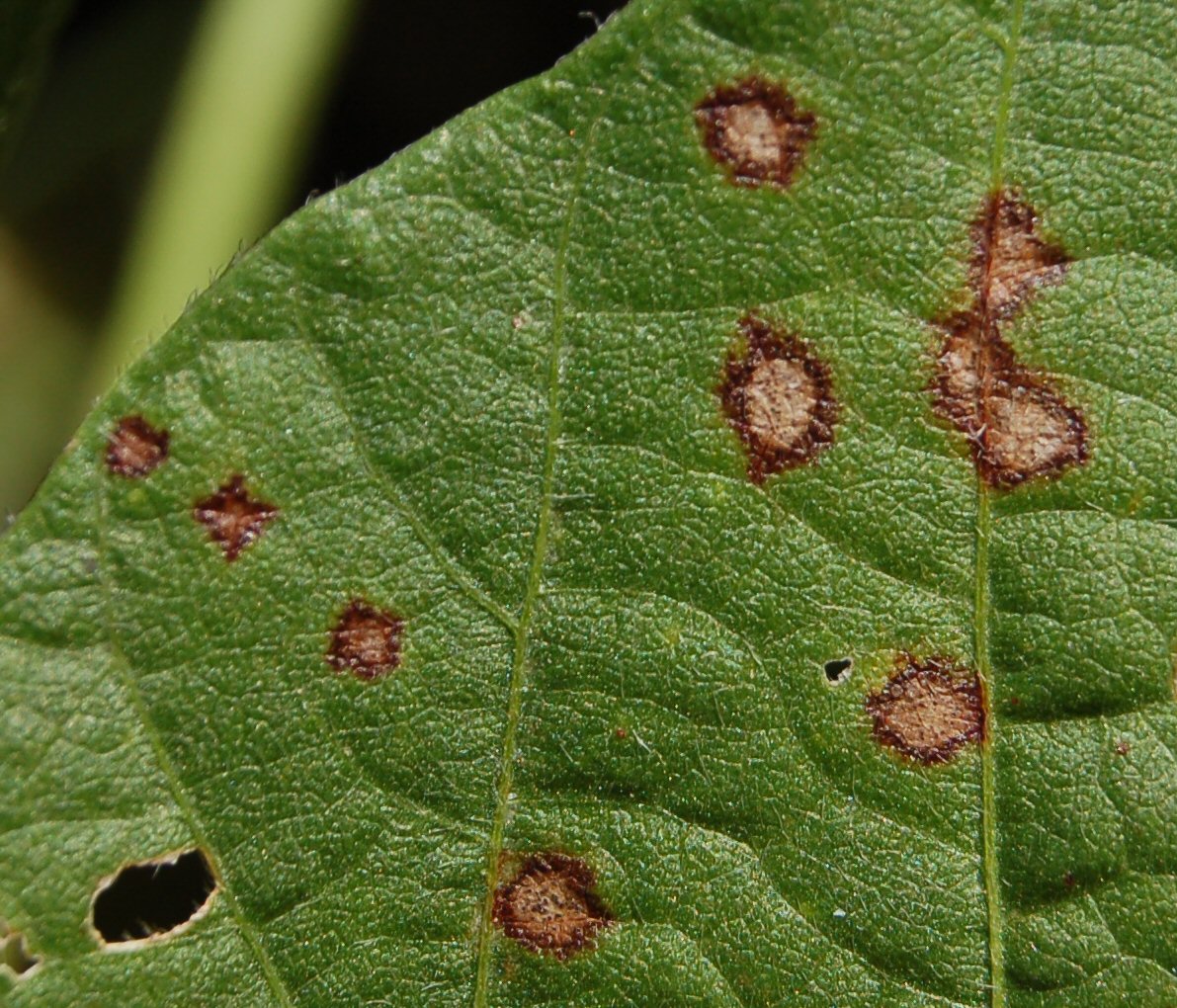 Cercospora leaf blight is a late season disease that is often mistaken for early senescence. This disease attacks seeds, pods, stems, and leaves; however, there is no consistent correlation between the development of foliar symptoms and the occurrence of stained seed.

The disease is easily identified through the discoloration of the seed and is commonly called purple seed stain. Seed discoloration varies from pink or pale purple to dark purple (Figure 6). The stained areas range in size from small specks to large irregular blotches, which may cover the entire surface of the seed coat.

Foliar symptoms begin to appear at the beginning of pod fill and develop initially as small, reddish-purple, angular to irregular lesions on the upper leaf surface. As the disease progresses, the infected leaves become leathery, and the upper surface of the leaf develops dark purplish-red to bronze discoloration (Figure 7). Heavily infected leaves rapidly turn yellow and drop from the plant, mimicking natural leaf fall. Lower leaves remain green and attached to the plant.

Although some soybean varieties are resistant, control is usually achieved by planting disease-free seed. In fields with a history of purple seed stain problems, the application of foliar fungicides during early pod set (R3 to R4) should aid in the control of this disease and may improve seed quality. 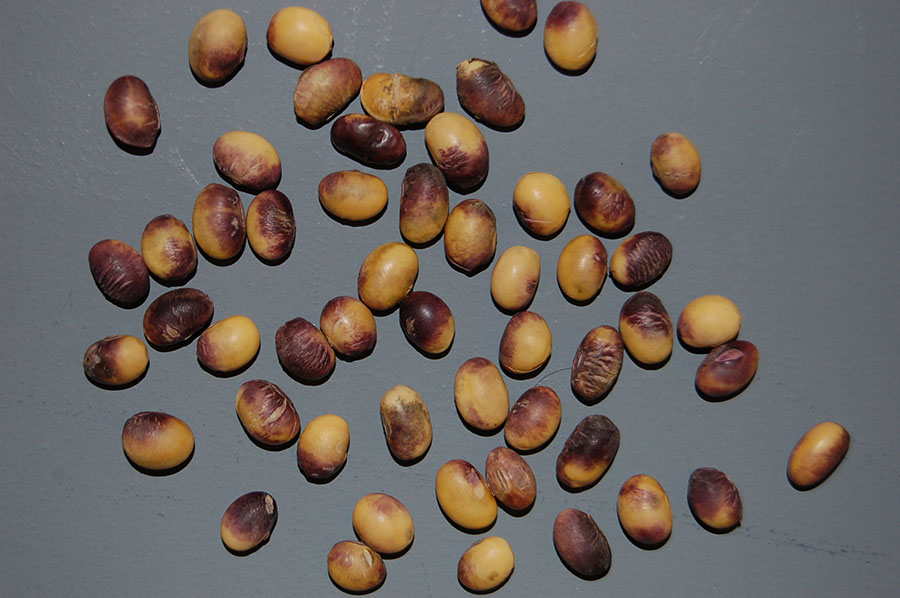 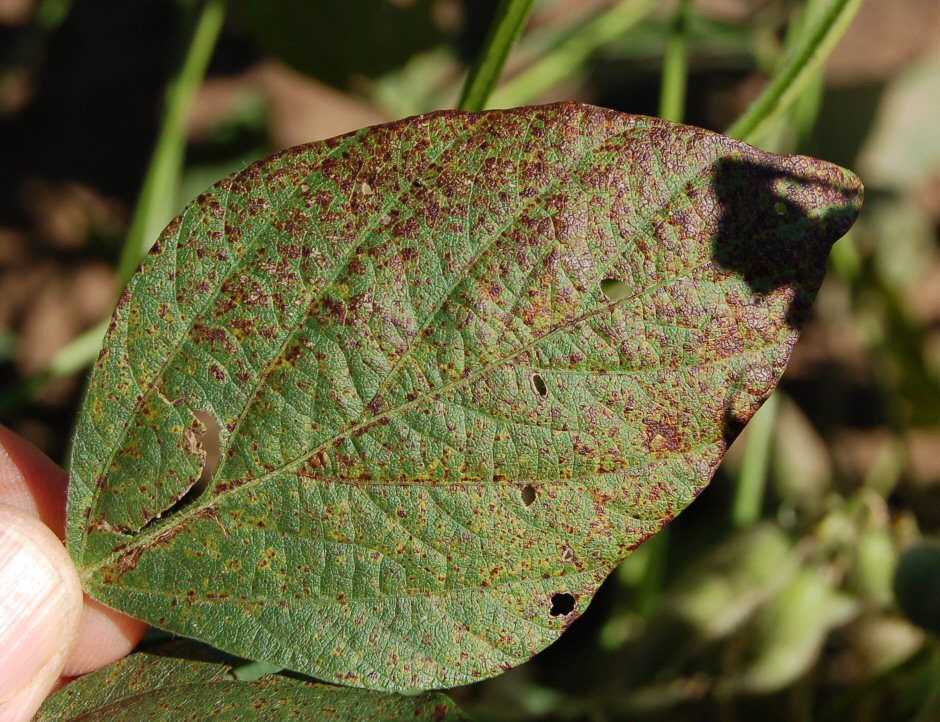 Since it was first discovered in the U.S. in 2004, soybean rust has occurred sporadically in Oklahoma. Because the disease requires living plants (soybeans or kudzu) to survive, it can only overwinter in tropical and sub tropical climates. It must move northward each year from areas where vegetation does not freeze such as Florida, south Texas, and Mexico. The northward progress of soybean rust is affected by cropping systems and weather conditions during the growing season. The disease is favored by wet and cloudy weather. Hot (>90F) and dry weather slows the progression soybean rust and the damage it causes. Therefore, the disease often does not reach Oklahoma early enough to cause significant damage, if at all. Nevertheless, soybean rust is a damaging disease that can reduce yield where it becomes established during early reproductive stages of crop development.

Symptoms of soybean rust first appear as pale green to yellow flecks on leaves in the low to mid canopy of plants in the reproductive stages of crop development. Spots become angular in shape and reddish brown in color (Figure 8). Spots remain small, but become numerous. Soybean rust can easily be confused with bacterial blight, bacterial pustule, and brown spot. A key feature of soybean rust is the raised pustules (pimples) on the underside of spots visible through a hand lens. Tufts of tan colored spores may also be seen emerging from the pustules.

The only effective management strategy is to make one or two applications of fungicide to the foliage during the reproductive stages of crop development where the disease has been identified or threatens. 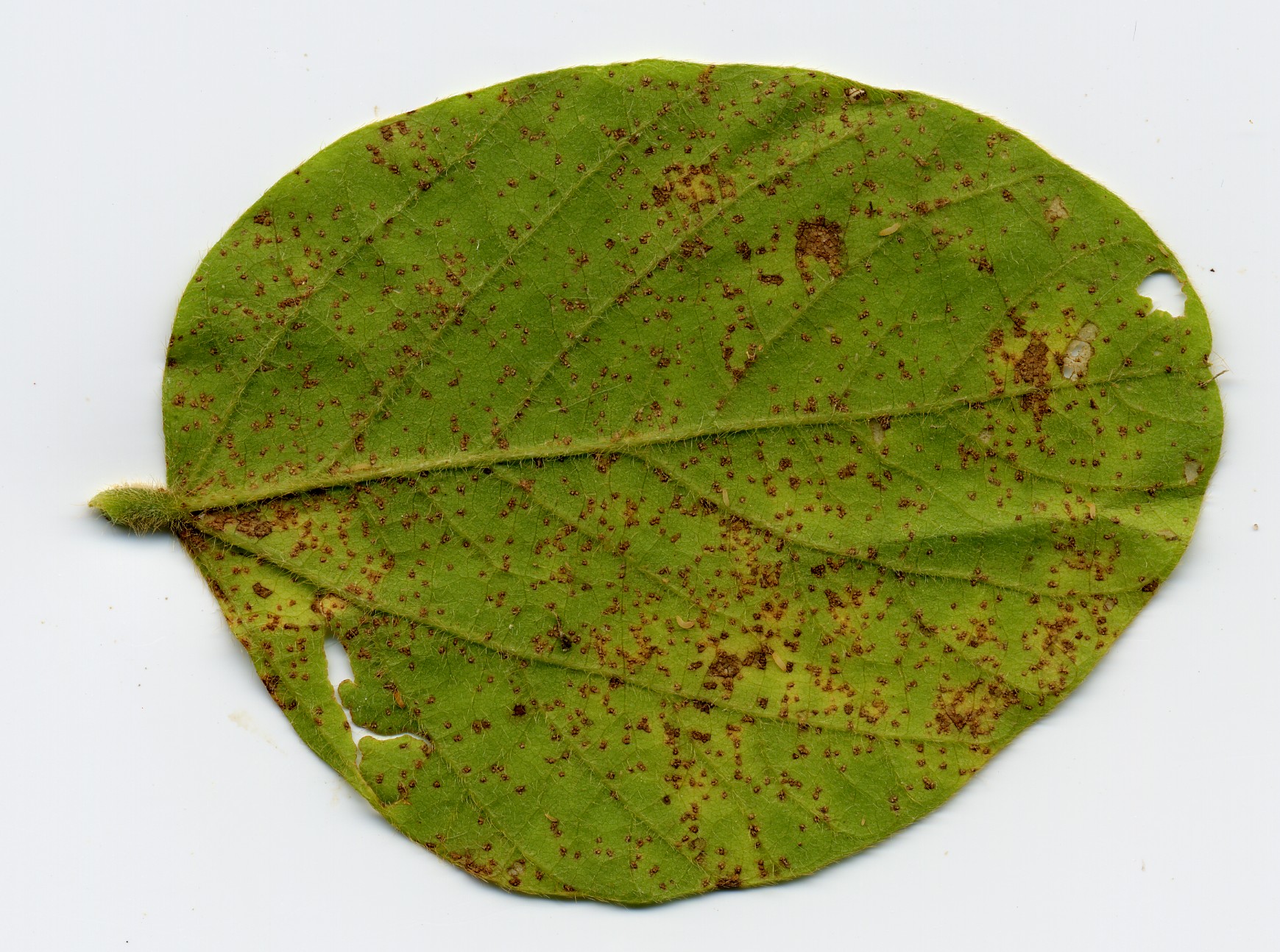 Use of Foliar Fungicides

The Oklahoma Cooperative Extension Service does not routinely recommend the application of foliar fungicides to control foliar, pod, and stem diseases of soybeans. Research conducted in Oklahoma has shown that although fungicides are capable of reducing the incidence and severity of these diseases, they are not consistently effective in increasing soybean yields except where frogeye leaf spot or soybean rust become severe. However, foliar fungicides have been shown to routinely improve seed quality in years in which warm weather and frequent rains occur during the reproductive stages of soybean development. Consult the Soybean Production Guide (Extension Circular E-967) or the Extension Agent’s Handbook of Insect, Plant Disease and Weed Control (Extension Circular E-832), available at your local County Extension office for more information on fungicides recommended for use on soybeans.

A basic strategy for control of foliar soybean diseases is prevention. The following suggestions are offered in an attempt to provide soybean producers some basic components that will aid in the prevention of soybean diseases.