Granular Insecticides are released when water is poured over the granules on treated mounds. To treat a single mound, sprinkle the recommended amount of granules with a measuring cup on top of and around the mound. Then, gently sprinkle 1 to 2 gallons of water over the treated mound to avoid disturbing the colony or washing the granules off the mound.

Remember, if you apply less than the recommended amount of water with either liquid concentrates or granular insecticides, you can expect poor results. Unless the product completely penetrates the mound, ants will move to a different site via underground foraging tunnels to avoid the poison.

Some products come in aerosol containers to which an injection rod is attached. The rod is inserted into the mound and the insecticide injected according to the label instructions for a quick kill of problem mounds.

Low toxicity and non-chemical treatments. A few active ingredients used in fire ant control products are commonly referred to as "organic" or "least-toxic" (e.g. boric acid, pyrethrins, rotenone and diatomaceous earth). Diatomaceous earth, a natural silica-based dust, will kill some ants, but is not very effective when the soil is moist and it rarely eliminates ant colonies when used alone. The effectiveness of products containing pyrethrins and boric acid, as compared to standard insecticides, has not been adequately determined.

Boiling water (about 3 gallons per mound) will eliminate about 60 percent of the mounds treated, but this treatment can be hazardous for the person transporting the hot water. Surviving mounds will need to be treated again. Care must be taken not to pour boiling water on grass or other plants.

Individual mounds can be physically moved from problem sites, such as gardens, by shoveling the mounds into a bucket. Sprinkle talcum powder liberally on the inside of the bucket and on the shovel handle to prevent ants from traveling up the handle and stinging you. Shoveling one mound on top of another in an attempt to force the ants to kill each other is not effective. Most fire ants are tolerant of ants from neighboring mounds.

Do not use gasoline or other petroleum products for fire ant control. While many of thee materials will kill fire ants, they are extremely flammable, will kill grass and other plants around treated mounds and can seriously pollute the environment.

The natural migration of fire ants started moving across the Texas-Oklahoma border in 1985, and colonies have become well established in some areas of counties from Love County east along the Red River. Based on the distribution of fire ants in the southeastern U.S., they should be limited by cold temperatures from moving too far into the state.

People and animals would definitely be happier without fire ants, but they are/will e a fact of life for people living in areas they infest, and people will need to learn to cope with them. Fortunately, with some persistence, fire ants can be controlled by using the Two-Step Control Method described in this brochure.

Fire ant workers in mounds are identified by their reddish-brown color, small size (1/16 to 1/4 inch long) and fiery sting, which often produces a white bump, or pustule, within 8 to 24 hours. Reproductive male and female (future queen) fire ants are larger and may be numerous in mounds before swarming and have wings at this time.

Fire ants infest lawns, school yards, athletic fields, and parks. They produce unsightly mounds and their painful stings pose a health threat and can disrupt human activities. Fire ants that nest near homes and other buildings can cause problems when they search indoors for food and moisture. Fire ants also enter air conditioners and other electrical equipment, where they can damage fuses and wiring.

Homeowners face a bewildering array of products for controlling fire ants. Most of them work well when used properly and according to label instructions; however, it's helpful to know their advantages and limitations.

The two-step method is a simple approach which can effectively control fire ants in heavily infested ares when conducted once or twice a year. 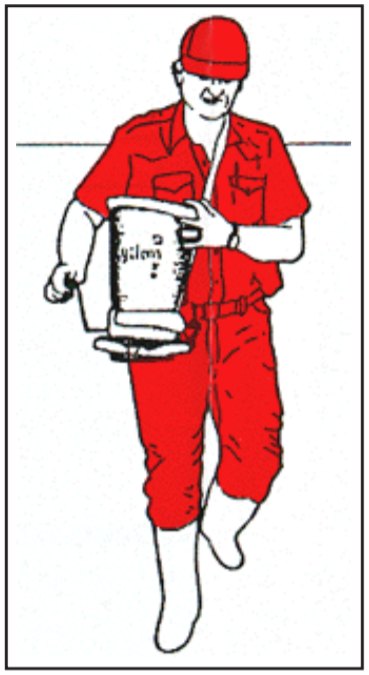 The first step in this method is to broadcast a bait insecticide over the entire yard. At least three commercially available fire ant baits can be applied in this way: Amdro®, Award®, (formerly Logic®) and PT 370 Ascend®. The best times for applying baits are spring and fall, although baits can be applied any time during the warm season when ants are active.

The second step is to treat individual problem mounds with an approved mound drench, granule, aerosol, or dust insecticide. Individual mounds should be treated no sooner than 3 days after baits are applied. Treatments should be limited to mounds causing immediate problems, such as those found along building foundations or next to high-traffic areas such as sidewalks or play equipment.

Most mounds that receive only the slower-acting bait treatment will eventually be eliminated; any that aren't killed should be left unless they are problem mounds. There is evidence that leaving such bait-treated mounds may actually help slow reinfestation of treated areas by ants from adjoining sites. Here are a few tips on how to use baits and individual mound treatments most effectively.

Fire ant baits consist of pesticides on processed corn grits coated with soybean oil. While baits can be applied as an individual mound treatment, they are best used as a broadcast treatment. Broadcast treatments are less expensive (in terms of product costs as well as time) and control colonies even when mounds are not visible. For best results:

Baits can be applied with hand-held seed spreaders such as the Cyclone Seed Sower® or Ortho Whirlybird®. Set the spreader on the smallest opening and make one or two passes over the lawn at a normal walking speed to apply the recommended rate (1 to 1 1/2 pounds per acre, or approximately 1 ounce per 2,000 square feet).

Bait products contain different active ingredients that work in unique ways. Hydramethylnon (Amdro®) is a slow-acting poison that causes approximately 80 to 90 percent of the mounds in a treated are to become inactive within one to five weeks. Fenoxycarb (Award®) and avermectin (PT 370 Ascend® for pest control operators) act as insect growth regulators. Their main function is to keep queen ants from producing more workers. It may take five to ten weeks or more for results to be seen, but as many 90 percent of the fire any mounds in treated areas may be eliminated. Control may last up to a year in ares larger than an acre. Smaller yards may show less dramatic results because they are more easily reinfested from adjacent untreated sites. 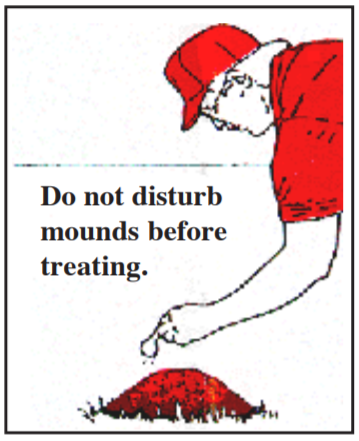 There are a variety of chemical and non-chemical methods for treating fire ant mounds one at a time.

Chemical treatments. Some products, such as those containing 75 percent acephate (Orthene® Fire Ant Killer), are formulated as dusts. Ants walking through the treated soil gets dust on their bodies and transport the insecticide into the mound. Within a few days the entire colony should be killed. To use a dust, distribute the recommended amount evenly over the mound. Do not inhale the dust or get it on your skin.

Liquid concentrates are diluted with water and then applied to the mound. These liquid mound drenches kill the ants underground, but must be applied in sufficient volume to penetrate the entire nest - 1 to 2 gallons of diluted mixture poured over the top of each mound. Mound drenches generally eliminate mounds within a few hours. When handling liquid concentrates, avoid getting the product on your skin by always wearing unlined rubber gloves. Mix the insecticide in a container such as a sprinkler can. Write "Poison" on the container and do not use it for any other purpose.