Evaporation of water from open water bodies could be a significant source of water loss, especially under hot and dry atmospheric conditions. As a result, studying evaporation losses and developing equations to estimate it has been the subject of numerous experiments since the 17th and 18th centuries. The main factors influencing the rate of evaporation from open water bodies include solar radiation (the source of energy), atmospheric parameters (air temperature, relative humidity, wind speed, etc.) and heat storage in the water bodies.

This Fact Sheet provides a brief review of available methods for estimating free-water evaporation losses. It then presents evaporation estimates for shallow water bodies in Oklahoma, using the pan evaporation method and monthly Mesonet data. The results can be used to quantify potential evaporation loss and to determine if implementing physical and chemical methods of minimizing and/or eliminating evaporation losses is cost effective.

This study focuses on shallow ponds, since deep water bodies (large lakes and reservoirs) have significantly different thermal characteristics that necessitate the use of different approaches and coefficients. A water body is considered shallow if it has a depth of less than 17 feet (Doorenbos & Pruitt 1977). Examples include outdoor swimming pools, irrigation ponds, fish ponds and oil/gas water supply pits. 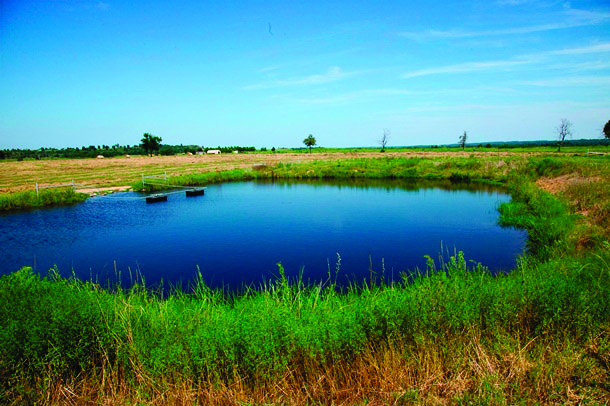 Several methods have been used by researchers to estimate evaporation losses from open water bodies. One method is the “water budget” approach, in which evaporation is estimated by comparing the flows of water going into and out of the water body of interest. Major inflow components include precipitation and surface runoff, while the main outflow components consists of evaporation, deep percolation and any possible overflow. The main disadvantage of this method that hinders its practical application is the need to accurately determine water budget components, which is a difficult task and has limited application for predicting future evaporation rates.

Another approach to estimate water evaporation is known as the “mass transfer” method. In this method, evaporation rates are estimated as a function of wind speed and vapor pressure difference between water surface and the air above it. Depending on the type of mass transfer equation used, a coefficient needs to be determined, based on numerous atmospheric parameters measured at the study area.

A third approach to estimate evaporation loss is to conduct an “energy balance” analysis, in which all major components of energy are identified. The net amount of solar energy available at the water body can be estimated by accounting for all incoming and outgoing short- and long-wave solar radiation, based on accurate information on sky and water conditions. But a major challenge is to identify the portion of energy stored in the water body, which can vary widely, depending on the thermal conduction and the depth of solar radiation penetration. In clean water, about 20 percent of solar radiation can penetrate to a depth of 33 feet. It could take months before the absorbed energy is eventually used in the evaporation process, which is why there is a long time lag between peak evaporation period for shallow and deep water bodies. Another major challenge toward implementation of mass transfer and energy balance methods (as well as methods combining these two approaches) is that atmospheric parameters should be measured over the water body and not at a weather station on land.

Several types of evaporation pans have been used in previous studies. One example is the Colorado sunken pan that is 3 feet square and 18 inches deep. As the name implies, this pan is placed in the ground with only 2 inches of its wall above the ground surface. Water level inside the pan is usually kept at or below ground surface. This type of pan has many advantages in estimating crop water requirements, but maintenance and detection of leaks is more difficult. The standard evaporation pan in the U.S. is known as the “Class A” pan (Figure 2), with a cylindrical design: 47.5 inch diameter and 10 inch depth. This pan is made out of galvanized iron and placed on top of a leveled 6-inch-tall wooden frame. The water in a Class A pan should be kept clean and allowed to fluctuate between 2 and 3 inches from the top of the rim. 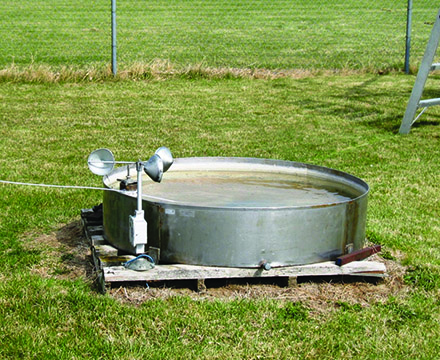 Figure 2. Class A evaporation pan at the USDA-ARS weather station at Kimberly, Idaho.

Developing pan coefficients (Kp) for large and shallow water bodies has been a major research area for the past century. The results of these studies show that Kp changes with variations in atmospheric conditions and varies by location. Hence, different Kp values have been developed for different times of the year. In addition, coefficients for large lakes are significantly different than those for shallow water bodies. This is mainly due to the heat storage capacity being much greater in large water bodies, compared to shallow ponds. As a result, most of the solar energy during hot summer months gets stored in deep lakes, while a large portion of it is used to evaporate water in shallow water bodies. This difference in thermal characteristics requires the use of different pan coefficients for estimating water evaporation from shallow ponds.

In this study, pan evaporation rates were estimated based on several atmospheric parameters measured at more than 120 Mesonet weather stations across the state, using the equation from the United Nations Food and Agriculture Organization Irrigation and Drainage Paper Number 24 (FAO-24). This equation and its variables are explained in the Mesonet publication “Evapotranspiration Product Description” (Sutherland et al. 2005). Monthly pan evaporation rates were estimated for every station for a 17-year period (1997 to 2013). The average monthly pan evaporation was then estimated for each of the nine climate divisions (CD) defined by the Oklahoma Climatological Survey (Figure 3). Climate division 1 had the smallest number of Mesonet stations (eight) and climate division 5 had the largest number of weather stations (25). The average number of weather stations in each division was 13.4, indicating a high level of geographic coverage by weather stations.

The next step was to identify appropriate pan coefficients to be multiplied by pan evaporation rates of each climate division. In this study, the Kp values were obtained from maps presented at the “Evaporation atlas for the contiguous 48 United States,” which is regarded as the standard reference for water evaporation studies. The Kp values in this atlas are to be used only for the 6-month period from May to October. This is a period when the demand for water increases rapidly due to higher human and agricultural water requirements. Map number 4 in this atlas provides Kp contour lines for the entire U.S. Figure 4 shows the section of the map including Oklahoma, where coefficients vary from 0.76 at the east to 0.68 at the southwest region of the state. 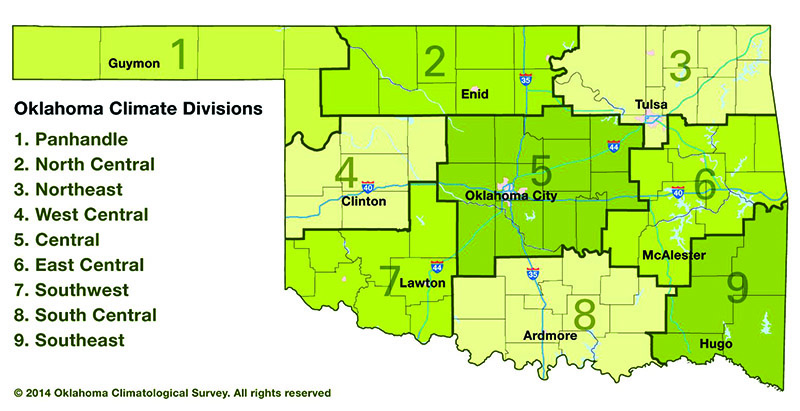 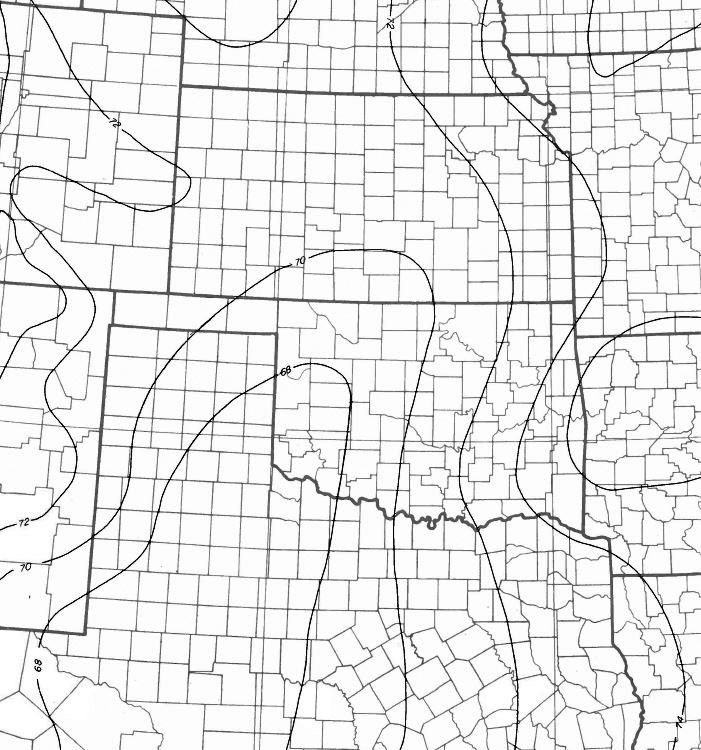 Pan coefficient contour lines were used to identify a single Kp value for each of the nine climate divisions (CDs) in this study (Table 1). These coefficients are very similar to the 0.72 value reported for the May-Oct period for Fort Collins, CO (Rohwer 1931).

Table 1. KP values selected for each Oklahoma CD based on Evaporation Atlas.

The Kp value selected for each CD was multiplied by the sum of average monthly pan evaporation rates for the six months of May to October to obtain an estimate of evaporation losses from shallow water bodies for this period.

The values of 6-month evaporation losses averaged during the 17 years of the study period are presented in Table 2 and Figure 7. Estimated rates varied from 28.1 inches at CD-9 (southeast) to 44.4 inches at CD-1 (Panhandle). These results are very similar to the 6-month estimates of Farnsworth (1982), who reported evaporation rates ranging between 30.0 inches at the eastern Oklahoma and 40.0 inches at the Panhandle region for a 15-year period (1956 to 1970). Based on the consistency in the results of these two long-term studies, it can be concluded that from 30.0 to over 40.0 inches of water is evaporated on average from shallow water bodies in Oklahoma during the six-month period of May-Oct. It should be noted that these rates could be significantly larger during drought periods. The two CDs in the southwest region, CD-4 and CD-7, had average evaporation losses equal to 40.9 and 40.3 inches, respectively. This amount of water loss is greater than the seasonal water requirement of cotton (the predominant crop in the region), which is about 30 inches (Boman and Warren 2014). 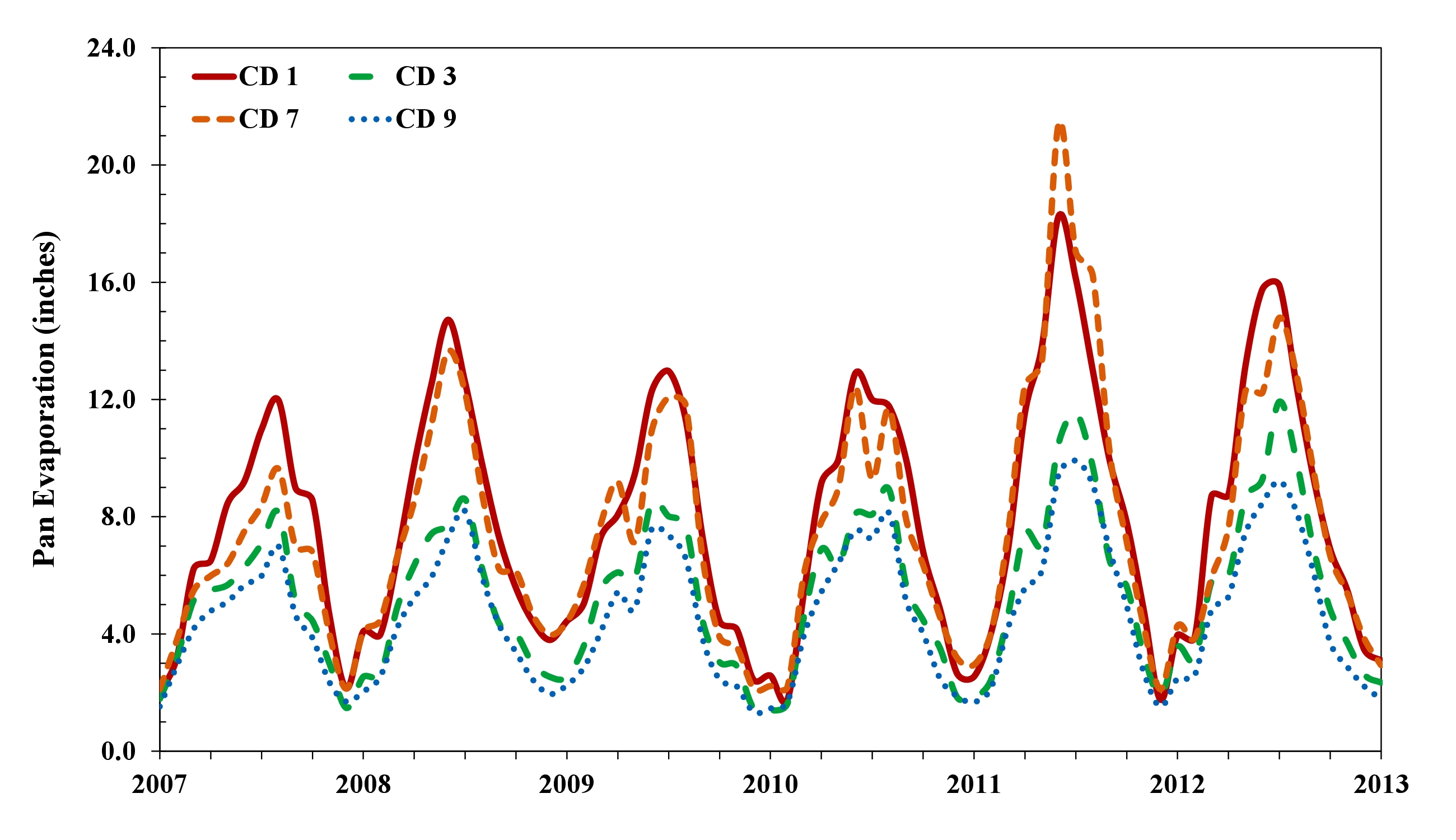 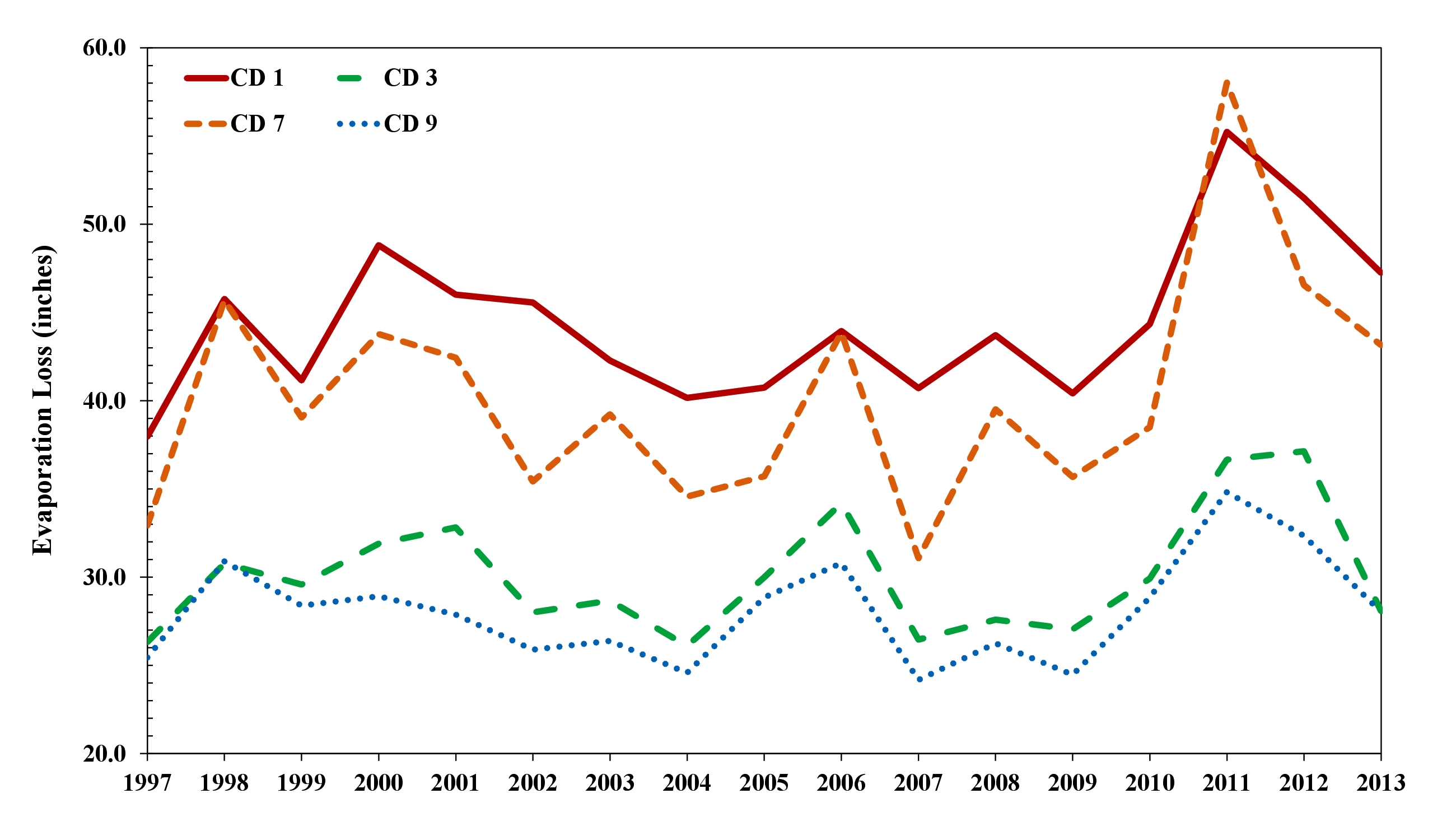 Table 2. Six-month shallow-water evaporation losses for the nine Oklahoma CDs, averaged during the 17 years of the study period.

Example: A farm pond in Jackson County is used for storing irrigation water. The pond surface area is 70 yards by 70 yards, which is about one acre. The average 6-month evaporation rate for shallow ponds is 40.3 inches for CD-7, where Jackson County is located. This rate is equal to 3.36 feet. Thus, the 6-month water loss from this farm pond is 3.36 acre-feet, or 1,094,856 gallons. 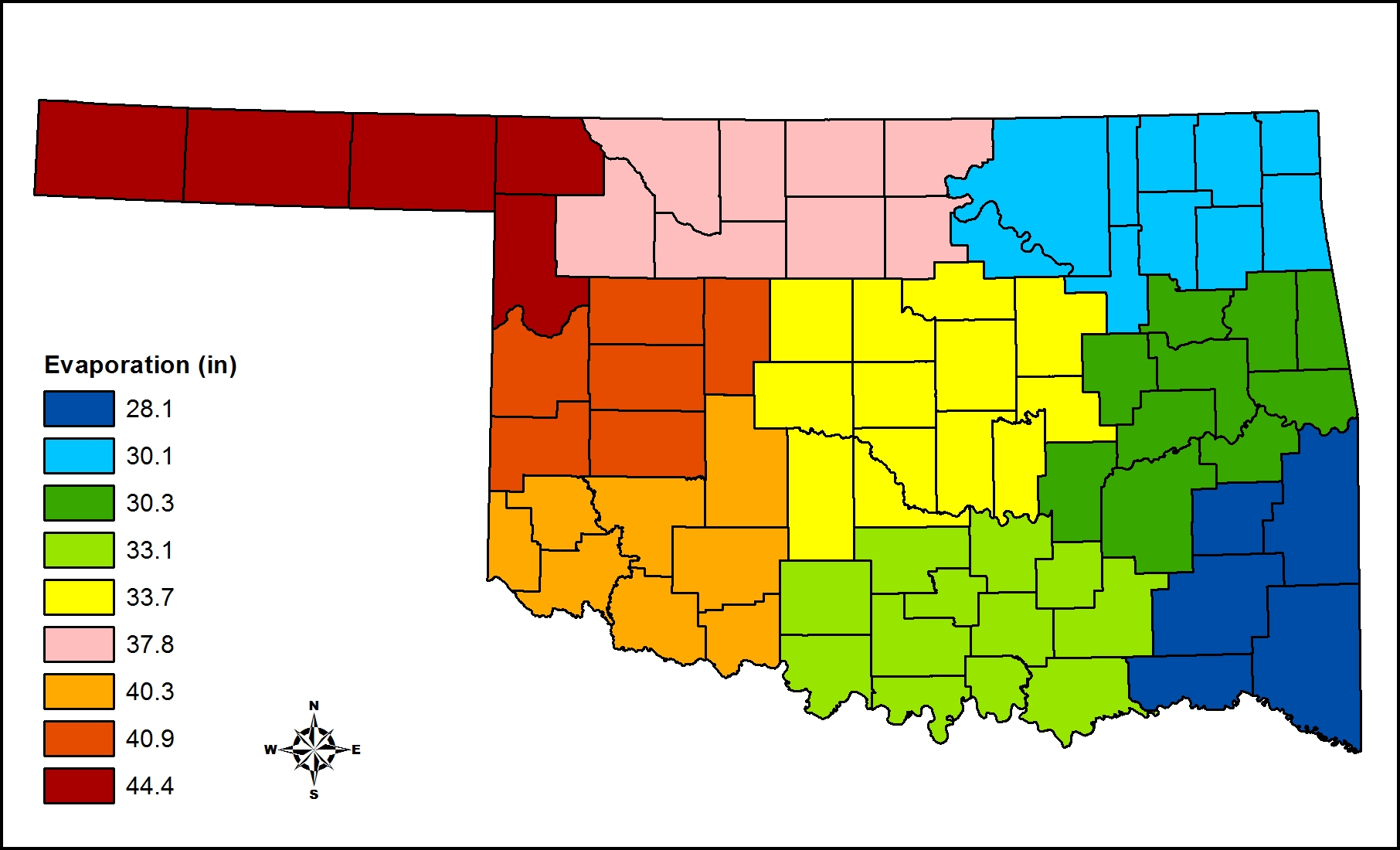 How to use pressure management as a tool for improving irrigation efficiency in home landscapes.