There are several preconditioning programs with varying names and management requirements. One familiar to many in Oklahoma is the Oklahoma Quality Beef Network (OQBN) program sponsored by the Oklahoma Cattlemen’s Association. It is a process verification and certification program. Another example is the VAC-45 program which is a process verification program recommended by Texas A&M University. It requires a 45-day post-weaning phase with a proper nutritional program, specified animal health program, dehorning, castration of bull calves, and bunk feeding. The purpose of preconditioning programs is to reduce stress from shipping calves at weaning, improve the immune system, and boost performance in post-weaning production phases, i.e., stocker production and cattle feeding, and in carcass performance, i.e., higher grading carcasses with fewer defects.

Considerable research has been conducted on the market value for various traits of feeder cattle. Previous studies were conducted over two decades and under varying market conditions. Considerable consistency can be found across the studies. Preconditioning affects feeder calf traits such as weight, condition, horns, sex, and health, but does not directly affect other traits such as breed, frame size, and muscle thickness. Only traits affected by preconditioning will be discussed.

Weight – Research consistently indicates feeder cattle prices decline as feeder cattle weight increases, though the magnitude differs with market conditions. For example, buyers typically pay lower prices for 500-600 lb. feeder cattle than for 300-400 lb. feeder calves. Preconditioning calves results in marketing heavier animals compared with marketing calves at weaning. Producers sell more pounds after preconditioning, but the weight effect alone means producers can expect lower prices for preconditioned calves. Some of this lower expected price may be offset by the seasonal price component associated with most preconditioning programs. Preconditioning programs are frequently used with spring calving programs. Instead of selling calves at weaning in October, calves would be marketed 45 days later in November or December. The typical seasonal price pattern for feeder calves throughout the U.S. involves a higher price in November-December than October (Peel and Meyer). Thus, preconditioning may enable cow-calf producers to capitalize on the normal seasonal price pattern for feeder calves.

Condition – Condition of feeder cattle can significantly affect feeder cattle prices. However, the degree of price differences varies by time of study and market conditions. One argument is that thin cattle may be discounted, especially if there is evidence of thinness being related to poor health or muscling. However, if associated with poor nutrition, thin cattle may receive a price premium because buyers expect compensatory gains after improving the nutritional level. Fleshy cattle are usually discounted, i.e., a recognition by buyers that no compensatory gains are likely. However in some cases, fleshy cattle are preferred as long as the degree of fleshiness is slight or moderate and is associated with health or thriftiness of the animals. Preconditioned calves that receive or are provided a high degree of nutrition may appear fleshy. Thus, in some cases, preconditioned calves may be discounted due to their fleshly condition. Some buyers may associate the increased fleshiness, i.e., especially if only slight or moderate, with higher nutrition and health, and may pay a price premium for preconditioned calves.

Health – Health is one of the most important stocker and feeder cattle traits (Lalman and Smith). Of all feeder cattle characteristics, health-related attributes often have the most profound effect on price. Unhealthy traits generally translate into severe price discounts. Preconditioned calves are expected to be healthier, less stressed, and have a stronger immune system than calves sold at weaning. Therefore, cow-calf producers should expect a price premium for preconditioned calves, due to the animals’ improved health. In some cases, the certification process screens or inspects cattle that have any type of health problem. They are sorted out and not certified or marketed with certified calves.

Uniformity – Sorting calves into uniform quality, weight, and breed type sale lots typically results in a price premium. Production and feeding efficiency increases for uniform lots of cattle. Not all preconditioning programs include sorting as part of their protocol. In cases where they do, cow-calf producers can expect a price premium for more uniform sale lots of calves.

Evidence supports the importance health makes to stocker, feedlot, and carcass performance, and profitability. Preconditioning increases feedlot and carcass performance while reducing feedlot morbidity and mortality rates and lowering medicine costs (Lalman and Smith). Performance gains included higher average daily gains, lower feed conversion, and lower cost of gain. Sickness in the feedlot reduces the percentage of Choice grade carcasses compared with those that have not been sick. As cattle feeders continue to increase their use of grid pricing, even more importance will be placed on carcass attributes. 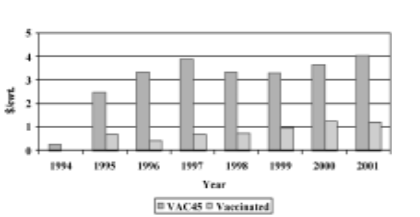 In an Oklahoma State University study, Avent analyzed two sets of livestock market data to estimate the market value buyers placed on preconditioning programs. Both data sets were on feeder cattle at the Joplin Regional Stockyards in Joplin, Missouri. One set of data included regular and special preconditioned calf sales from December 1997 to March 2001. The second set of data was from two preconditioned calf sales and one regular feeder cattle sale on three consecutive days in December 2000.

The second set of data provided more detail on each sale lot. The premium price for the preconditioning program with a single protocol was $3.36/cwt. compared with the regular weekly auction. The second preconditioning program generated premiums of $1.96/cwt. The lower premium for the second program could be attributed to having several different vaccination and feeding guidelines. Both results are consistent with previous results (Figure 3). Price premiums at Superior Livestock averaged $3.04/cwt. over eight years (King) compared with the two Joplin Regional Market data sets for different time periods. 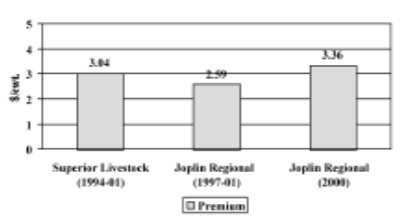 There are several preconditioning programs and sponsoring organizations. The reputation of each varies. Building a positive reputation takes time. Buyers of feeder calves pay premiums for what they feel is the quality of the cattle, given the confidence they have that producers treated the animals according to the specified program (Yeboha and Lawrence). TCFA feedyard managers estimated that preconditioned calves were worth $5.25/cwt. more on average than non-preconditioned calves. Note their perceived difference was higher than the research reported here. One reason for the difference may be reputation and integrity questions surrounding existing preconditioning programs. Cattle feeders might pay a premium more closely related to the expected performance difference if there was higher perceived assurance and confidence that cow-calf producers followed the preconditioning protocol, thus resulting in actual expected performance differences. Without that assurance, cattle feeders will bear a portion of the risk and will respond by bidding less than the “true” or estimated value difference.

The perceived value expressed by feedlot managers exceeded the value based on market data. The estimate from market data for a single-protocol preconditioning program was $3.36/cwt. in 2000. It appears feedlot buyers pay what it takes to purchase preconditioned calves. That premium, from this and previous research, appears to be less than the perceived, expected value of preconditioned calves based on feedlot managers’ experience. Therefore, for cow-calf producers to receive premium prices closer to the perceived added value for preconditioning programs, more effort should be made to build a reputation for integrity by sellers.

Preconditioning programs can be profitable for cow-calf producers, but not from the premium price alone that buyers have been found to pay for preconditioned calves. Several factors contribute to enhanced returns from preconditioning; selling added weight, marketing into a seasonally upward trending market, marketing steers rather than bulls, marketing dehorned rather than horned or mixed lots, marketing in larger and more uniform lots, and marketing healthier calves. Producers should recognize that added weight means lower prices, ceteris paribus, and may increase fleshiness, which often is discounted by feeder cattle buyers.