Ecology and Management of Western Ragweed on Rangeland

Western ragweed is distributed across all of Oklahoma and most of the United States because it can adapt to many environments. It can be found on clayey or sandy soils ranging from droughty to wet, and at all levels of fertility. Western ragweed usually increases during wet periods due to the availability of excess moisture. It will increase following a drought if stocking practices for domestic livestock are not adjusted and grasses deteriorate from overgrazing.

Seed production is of secondary importance for western ragweed since it is a perennial and produces new growth from rootstocks. When seedlings establish, they will not flower or produce additional shoots during the first growing season. The second year, additional shoots will develop from creeping rootstocks and form a clone.

On deep soils, the roots of western ragweed are distributed evenly throughout the soil to a depth of 5 or 6 feet. Most of the dominant grasses have more than 90 percent of their roots in the top 2 feet of the soil, so soil depth is a strong factor influencing the level of competition with grasses. On shallow claypan soils, western ragweed can become highly competitive because its roots are able to penetrate the claypan while those of grasses cannot and may lack moisture. In this respect, ragweed may be beneficial to the site by breaking the claypans over time. As the soil depth to bedrock decreases, the roots of western ragweed and grasses become restricted to similar zones and competition for resources intensifies.

In general, grasses are superior competitors to western ragweed. The tallgrasses are capable of shading the shorter ragweed plants, which affects their ability to collect energy for growth and reserves. Western ragweed can be found in the healthiest of prairies, but is largely inconspicuous because it has taken on a spindly growth form. This relationship changes when grasses are grazed or otherwise reduced and more light is made available to the ragweed. The result is a ragweed plant with more branching and leaf production. Studies show that ragweed may be 30 percent taller in ungrazed patches, but 50 percent heavier in grazed areas.

Most often, western ragweed increases with increasing grazing pressure. This is likely the result of a number of factors, including western ragweed’s response to additional sunlight. Also, when grasses are grazed closely, their root growth stops or is severely set back. Even in lightly stocked pastures, western ragweed may become abundant where spot-grazing occurs. There are two exceptions to this rule. In mixed prairie of western Oklahoma, western ragweed may actually decrease with the grazing pressure of higher stocking rates. The higher stocking rates, however, will also cause the more productive mid-grasses to be replaced by shortgrasses, such as buffalograss.

Research done by the Noble Foundation in Ardmore, Oklahoma, has shown that western ragweed has higher levels of nutrition than many ranchers had assumed (Table 1). This research is supported by recent pasture level trials done by OSU’s Rangeland Ecology and Management program in which spraying weeds did not translate into increased livestock performance. These results conflict with the popularly held belief that spraying improves livestock gains and makes rangeland “better.” These beliefs have been generated over the years by small plot research in which no livestock were involved and only counts of plants that were killed by herbicide were measured. These results suggest that landowners should be cautious about spraying “weeds” to improve their cattle or wildlife management operation.

Currently there is more knowledge of how to kill weeds than there is about the actual damage they do. A weed is any plant that exists where it is not wanted. A general rule of thumb has been that one pound of forage is lost for every pound of weeds produced, but the equation is not that simple. In Oklahoma, broadleaf plants make up a small portion of the production on rangelands, but they represent the majority of species. In reality, forbs may differ greatly from each other, such as their varying effects on grass production. Where western ragweed was the dominant forb, chemical control has produced variable results. For each pound of grass gained from chemical control, a range of 4 pounds to just under 1 pound of forb control has been needed.

There was also no effect on grass production in the tallgrass prairie of north-central Oklahoma with up to 600 pounds of western ragweed per acre. About 4 ragweed stems per square foot in September will equal these levels of production for tallgrass and mixed prairies. If stands are not heavily infested, 35 to 50 percent of the ragweed stems seen in the spring will not survive to September. This should be considered when evaluating the need for control in the spring. 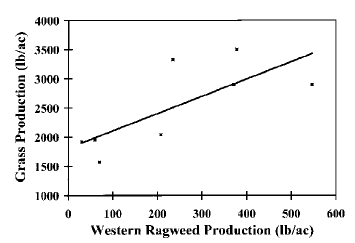 Where hunting leases are a part of the operation or wildlife are of personal interest, special consideration should be given prior to broadleaf weed control. Western ragweed is an important forage for white-tailed deer in Oklahoma during spring and summer and it serves as brood habitat for wild turkeys. The seeds are heavily utilized by bobwhites and mourning doves. They have a potential value as food for songbirds. More importantly, attempts to control weedy forbs often result in the removal of many forbs that are desirable for wildlife and cattle.

Cattle diets on rangelands are not entirely composed of grasses. Many forbs are palatable to cattle and are valued because their nitrogen and phosphorus content is higher than that of grasses. These broadleaved plants are not weeds and maintenance of such plants could reduce the need for supplementation to meet protein and phosphorus requirements.

Broadleaf weed control increase cattle performance to a level where monetary returns exceed the costs of treatment. An increase in grass production does not ensure that cattle performance will improve. It is only when western ragweed production is great enough that animal performance is lowered, or its removal will produce enough forage to increase the number of animals, that a benefit can be realized. The operator must not only gain enough forage to overcome the cost of control, but they must be sure their cattle will harvest that forage. Care should be taken when increasing the number of animals because high stocking rates could be causing the initial problem. The addition of animals could diminish the benefits of control by requiring another treatment in subsequent years.

The use of mowing as a control method is inefficient and highly ineffective. Damage to the main stem in the first half of the growing season will result in a short bushy plant with many branches rising from the base. Continuous mowing throughout the summer is necessary to prevent flowering and must be done for several years to starve the extensive root system of a clone. In the process, the vigor of the grasses would be harmed, reducing their ability to compete.

Chemical control requires proper timing. For 2,4-D, this means application should occur when air temperature is warm, soil moisture is good, and the targeted plants are 2 to 4 inches tall and actively growing. Western ragweed reaches this point of development in early May. Eighty to 100 percent control of western ragweed can be achieved under these conditions with 2,4-D at a rate of 1 pound per acre. Banvel (dicamba) plus 2,4-D and Grazon PC (picloram) plus 2,4-D can provide higher levels of control, but they are not as cost-effective as properly applied 2,4-D.

The greatest economic returns from applying 2,4-D will occur on the most productive sites, but care should be taken in treating only portions of a pasture. Cattle are sometimes attracted to herbicide-treated areas, regardless of the level of forb control. Such attraction could cause them to over-utilize the treated area the first summer after treatment.

Chemical control is most cost-effective when it is followed by proper grazing management. Since an abundance of forbs is often the result of overgrazing, failure to adjust stocking rates will likely cause the problem to recur. Use of moderate stocking rates can extend the life of the herbicide treatment so that future control may only be necessary during wet years.

A number of options are available to cow/calf and stocker operators. Light or moderate stocking is the simplest. While western ragweed may persist in small areas that are grazed closely, the grasses over the majority of the rangeland will provide sufficient shading to limit ragweed growth. Stronger grass root reserves will be built because of the lighter utilization. Resting a pasture during the last half of the growing season or the entire growing season will provide more uniform results and the forage can be grazed after the grasses have gone dormant. Western ragweed has been reduced by 50 to 60 percent following rest.

Some western ragweed problems may occur where grazing distribution is poor. If cattle concentrate on certain areas of the pasture, leaving others untouched, efforts should be made to attract the cattle to the unused areas. Feeding or moving mineral blocks to unused regions of the pasture may alleviate some of the pressure on the concentration area and allow grasses to recover. An option restricted to the use of stocker cattle is intensive-early stocking. This system provides rest during the last half of the growing season and actually reduces western ragweed in the first half. Even though this involves heavy utilization of grasses, the ragweed is set back as well, keeping the contest between grasses and western ragweed even. While the ragweed experiences some recovery in the last half of the growing season, this rest provides equal opportunity for warm-season grasses to store valuable reserves for the following year.

This is not the full extent of grazing management options that can be pursued to control western ragweed. The key is that the vigor of the grasses must be maintained and enough forage should be left to limit the amount of light available to the ragweed. Management practices that meet these goals should prevent problems with western ragweed from developing.

Western ragweed is not a superior competitor to grasses under normal circumstances. The competitive edge must be taken away from grasses before ragweed can dominate an area. This usually occurs because grasses have been over-utilized, or the soil has been disturbed or is shallow. Where western ragweed has become a problem, a change in grazing practices should be considered before the use of herbicides. With proper grazing management, use of herbicides will seldom be necessary, but they can be helpful in giving grasses a chance to recover from past over-use.

The purpose of this publication is to describe the introduced thistles, selected common native thistles and provide information about them.

An aid for Johngrass identification and maintenance practices that also points out the benefits and drawbacks of weed in pastures.

A reference for determining the attributes of common plants in Oklahoma and their value to wildlife and indirectly to the land manager’s interests or needs.