Dutch Elm Disease and Its Control

Dutch elm disease is caused by the fungi, Ophiostoma ulmi and O. novo-ulmi.  The pathogens are similar, but O. novo-ulmi is more aggressive and is the most common species present in Oklahoma. The fungus invades and grows in the xylem, or water-conducting vessels, of infected elms.  Infection induces the host tree to produce materials which, together with the fungus, plug the xylem vessels and prevent water uptake.  Eventually, this blockage causes the tree to wilt and die.

The first evidence of DED is wilting or “flagging” in one or more of the upper branches (Figure 1).  Leaves on affected branches turn dull green to yellow and curl, then become dry, brittle, and turn brown.  Some trees die several weeks after becoming infected, while others wilt slowly and survive for a year or more.  Peeling the bark from wilted branches reveals light to dark brown streaks or blue to gray discoloration of the wood beneath the bark (Figure 2).  In cross section, this vascular discoloration appears as a brown ring in the outer sapwood of the wilting and dying branches (Figure 3).

To positively identify Ophiostoma species, samples from actively wilting branches with definite vascular discoloration are needed (i.e., the fungus cannot be isolated from dead, dried branches).  Branch samples from trees believed to be infected with DED should be about 1 inch in diameter and 5 to 10 inches long.  Samples should be taken to your local county Extension office; Extension staff will send them to the Plant Disease and Insect Diagnostic Laboratory for testing. 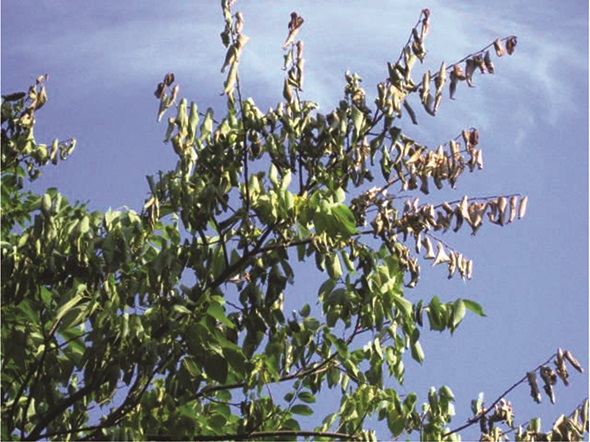 Figure 1. An early symptom of Dutch elm disease is flagging or wilting of upper branches of an infected elm. Photo by Oklahoma State University. 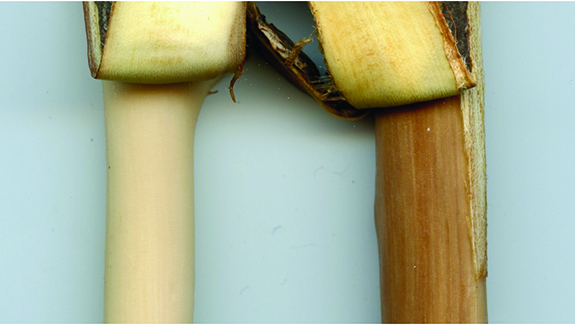 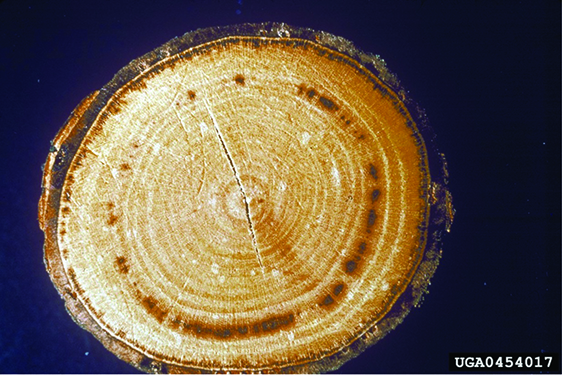 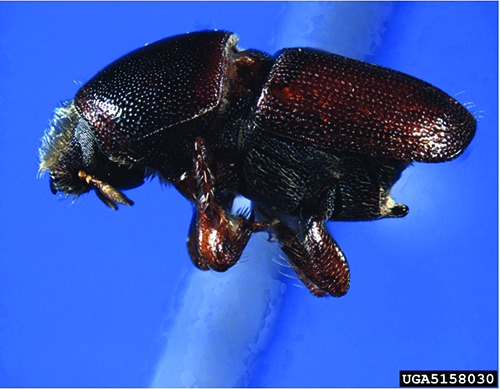 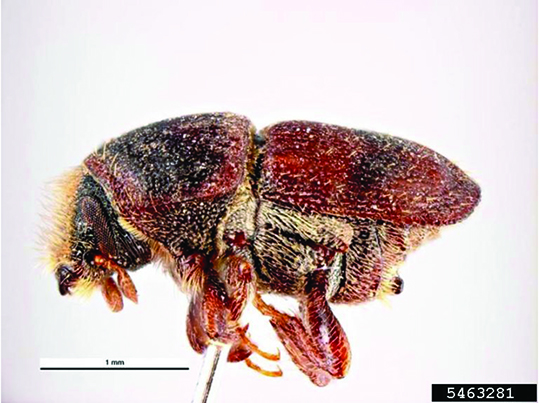 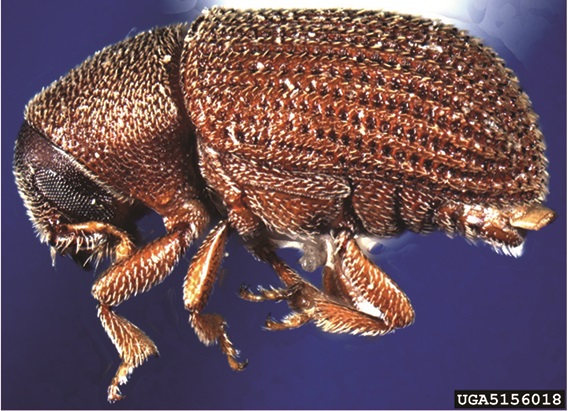 Both Ophiostoma species and smaller European elm bark beetle were introduced into the U.S. from Europe.  This beetle was first reported near Boston, Massachusetts in 1909 and has spread out through an even greater area than the disease itself.  Smaller European elm bark beetle was first reported in Oklahoma in 1953.  Bark beetles attack trees for either feeding or breeding.  Beetles feed primarily in one- to four-year-old twig crotches of healthy elms (Figure 7).  Feeding injury is most common in twig crotches located on the outer portions of the tree crown.  Beetles breed in dying or dead elm trees and logs with intact bark.  Healthy elm trees are readily attacked for feeding, but are rarely selected for breeding. 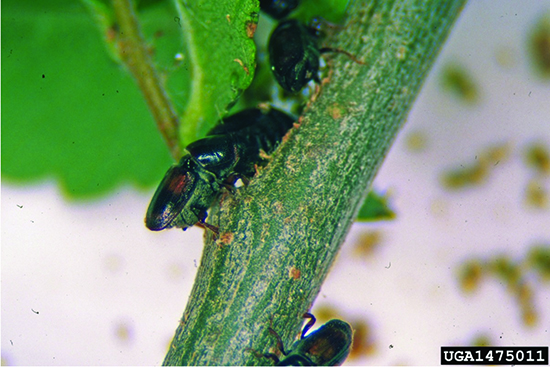 Overwintering larvae complete their development in early spring and emerge from the wood as adults in late spring.  Adult elm bark beetles feed during the entire growing season of the elm.  Smaller European elm bark beetle emergence begins in April and continues through October.  Two to three generations can occur in Oklahoma with the overwintering generation emerging in late April, the first generation emerging in June, and the second generation emerging in late August to early September.  The second generation is the largest in terms of numbers, but the overwintering and first generations are the most important in disease transmission because their emergence occurs when elm trees are most susceptible to the disease.  Soon after adult beetles emerge, they search for feeding and breeding sites throughout the entire growing season of elms.  Tremendous increases in the number of elm bark beetles can occur in recently killed, cut, or damaged elm trees.

Reservoirs of the fungus develop in brood galleries established in infected wood (Figures 8 and 9).  Adult beetles emerging from these galleries carry fungal spores inside and outside their bodies, and can introduce them into healthy elms when they feed.  In this way, the DED fungus may be moved long distances throughout the entire active period of adult elm bark beetles.

The highest incidence of DED results from beetles that emerge and feed during spring and early summer (i.e., overwintering and first generation, respectively).  During this period, the long vessels of the springwood, which are responsible for conducting materials inside the tree, are open and functioning.  Spores of the DED fungus are introduced into these springwood vessels and carried rapidly to other parts of the tree.  Vessels produced later in the summer are shorter and smaller in diameter and restrict movement of the fungus, which may delay death of the tree. 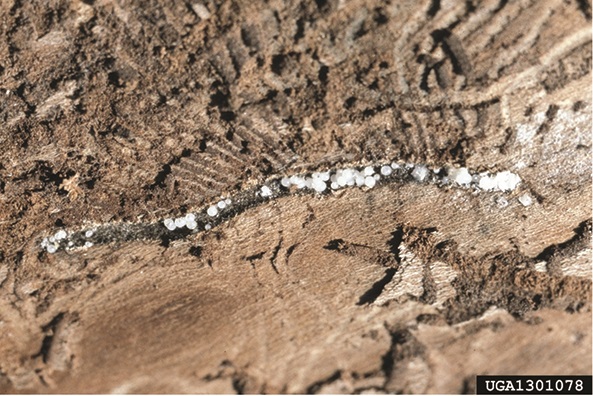 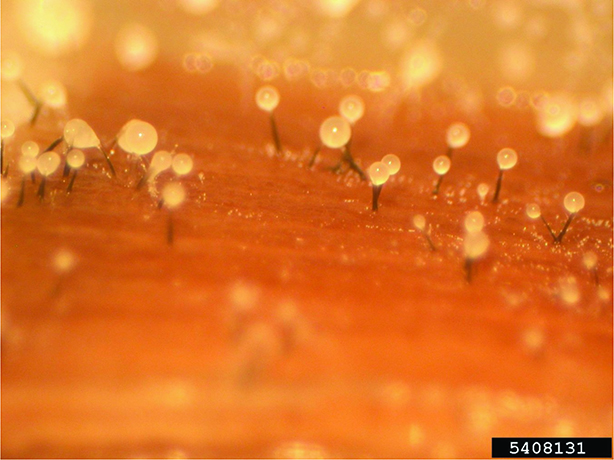 Root grafts (i.e., roots naturally fused together) occur between elms of the same species growing near one another.  The prevalence of root grafts is influenced by the proximity of the trees and soil conditions.  The DED fungus spreads from diseased to healthy trees through these grafts.  The extent of spread through root grafts varies, but it is considered to be important, especially where large, infected trees are within 35 to 50 feet of healthy elms.

The primary emphasis in a community-wide DED management program is preventative action.  The basic elements are:

These sanitation measures are the key to successful management of the disease.  Sanitation of dead and dying elm material each year can suppress the disease to minor proportions within a community.  Other management techniques are pruning out early infections, insecticide and fungicide applications, and planting resistant varieties of trees.

Dead and dying elms need to be removed because a section of an elm branch the size of a fireplace log, 22 1/2 by 3 1/2 inches, can produce up to 1,800 beetles.  Left to stand, a complete tree could produce hundreds of thousands of beetles.  If this tree were infected with the DED fungus, each emerging beetle carrying fungal spores could inoculate healthy trees during feeding.  However, early detection and proper tree disposal prevent beetles from spreading the pathogen.  In addition to eliminating the beetle population, sanitation eliminates a potential reservoir for the pathogen.

Proper disposal of elm material includes destruction of developing beetles and making the wood an unsuitable environment for elm bark beetles.  This is the final important phase in a successful sanitation program.  Burning and burying are effective means of disposal, but are not productive from a wood utilization standpoint.  Chipping is a good alternative to burning or burying since chipped wood cannot support beetle development.  Never lose sight of the primary concern of wood disposal–the prompt elimination of beetles and beetle breeding material.

The DED fungus commonly spreads from infected elms to nearby healthy elms of the same species through naturally grafted root systems.  This spread can be prevented by mechanically trenching in areas where root grafts are likely to occur between infected and healthy elms.  Root graft barriers or trenches should completely encircle diseased trees when elms are present on all sides (Figure 10).  A trench measuring 36 to 40 inches deep between diseased and healthy trees immediately disrupts root grafts. A vibratory plow or mechanical trenching machine is the easiest way to trench, but its use may be limited in rocky soils or where underground utilities are present.  After the trench is dug, refill it and immediately remove the diseased elm trees. 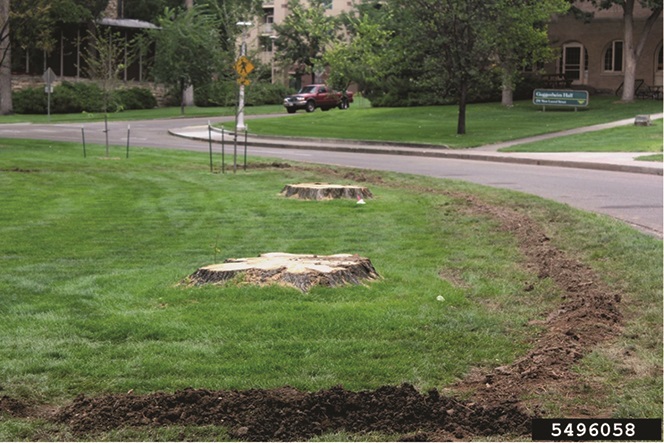 Early infections can be removed from elm trees by pruning.  A minimum of 8 to 10 feet of streak-free wood (no vascular discoloration) below obviously infected branches must be removed.  The entire circumference of the branch must be examined to be certain that the fungus has been removed.

Another phase of the preventative program is control of elm bark beetles by spraying with a properly labeled insecticide.  A thoroughly applied spray may kill or prevent beetle feeding, and thus prevent infection by the DED fungus.  A preventative spray approach to control the beetles includes treatment in late fall after the leaves have fallen.  This helps control the last brood of adults that would be entering the trees to lay eggs for overwintering.  Also, a treatment in early spring before bud swell (late March to early April, if possible) will help kill emerging overwintering adults that would likely feed on susceptible trees.  Consider following this treatment with another spray mid-May to early June.  All bark surfaces must be completely covered with spray (especially smaller branches and twigs in the crown) to prevent bark beetle feeding or breeding.  To effectively reduce bark beetle numbers, a thorough sanitation program should be followed, common root systems disrupted, and insecticides applied when needed.

Infection of healthy elms by the DED fungi may be prevented by fungicides that are labeled for this use.  To be effective, these chemicals need to be injected directly into the tree.  Fungicide injections are not recommended for trees with more than five percent DED symptoms or for trees infected via root grafts.  While fungicide injections have been effective in protecting valuable, healthy elms in communities with intensive DED control programs, the injection process itself may cause irreversible damage to trees if improper technique is used.  Remember, sanitation is the key to DED control.

Although elm species vary greatly in their susceptibility to DED, none are immune. The American elm, Ulmus americana, our most valuable native elm tree, is one of the most severely affected. The Siberian elm, Ulmus pumila, and the Chinese or lacebark elm, Ulmus parvifolia, are resistant to DED.  Lacebark elm is a disease-resistant tree that is well adapted to most of Oklahoma.  Siberian elm is not recommended as a shade tree because it is subject to winter injury, elm leaf beetle attack, and it can support bark beetle populations.  The ‘Urban’ and ‘Sapporo Autumn Gold’ elms are disease-resistant hybrid trees of Ulmus pumila x U. japonica,  but do not have the size or growth form of the American elm.  Three American elm cultivars, ‘Valley Forge’, ‘Princeton’, and ‘New Harmony’, have shown high levels of resistance to DED and are available through commercial nurseries. The ‘American Liberty’ elm is available through the Elm Research Institute in Keene, NH (http://www.libertytreesociety.org/), but not through commercial nurseries.  However, there are six genetically distinct cultivars that share the name, ‘American Liberty,’ of which several can be found at commercial nurseries.  More than 250,000 ‘American Liberty’ trees have been planted in the U.S. since 1983, and only 150 have become infected with DED.  Finally, the American elm cultivar, ‘Lewis & Clark’ (marketed as ‘Prairie Expedition’), is commercially available.  This cultivar was produced as clones of a DED-resistant tree discovered in North Dakota, however, subsequent testing of these clones for disease resistance yielded inconclusive results due to inadequate replication.