According to a report from Packaged Facts (a division of MarketResearch.com) titled “Gourmet, Specialty and Premium Foods and Beverages in the U.S.,” consumers purchased nearly $59 billion worth of gourmet and natural packaged products in 2007. This was 10.9 percent more than in 2006. The U.S. gourmet and premium sector is expected to continue growing to a level of $96 billion by 2012.

At the same time, consumers are more aware of healthy eating options and are seeking products that claim to be “natural.” This implies that foods of natural origin in a gourmet or premium format could meet consumers’ twin desires in one venue.

As of October 2007, the number of new gourmet foods and beverage products displaying a natural claim was 259, up from 174 in 2006. According to Packaged Facts, mainstream supermarkets and grocery stores have led the way in this growth and account for 52 percent of gourmet and specialty foods market offerings in 2007 (natural or not).

In Oklahoma, there are many specialty gift shops that offer gourmet food and beverage products either on the shelf to the walk-in customer or in gift baskets distributed throughout the U.S. Many of these shops look for locally produced or “Made in Oklahoma” items to carry. Additionally, specialty food shops such as Native Roots Market in Norman, Okla., have opened their doors with a major focus of their operation being to offer high quality, locally produced foods and beverages.

In order to better understand distribution of gourmet foods and beverages in Oklahoma, the Robert M. Kerr Food & Agricultural Products Center conducted a telephone survey of specialty food and gift shops in the Metropolitan Statistical Areas (MSA’s) of Oklahoma City, Tulsa, Enid and Lawton. Contact information was obtained through an Internet Yellow Pages search. Additionally, since some Oklahoma winery gift shops carry foods and beverages, wineries listed at Oklahomawines.org were included in the telephone survey. Callers were able to make 103 contacts; however, only 40 contacts were willing to respond to the survey (a 38.8 percent response rate).

The specialty shops were asked questions to develop an understanding of how food and beverage products are delivered to their stores. A common method of payment, payment terms and mark-up percentages also were determined. The results of the survey follow.

Participants in the survey were asked how food and beverage products were delivered to their stores. Specifically, they were asked to select “all that apply” from the choices of UPS, FedEx, food distributor (e.g. Deli Delights), manufacturing representative (e.g. Blue Sky Bakery), personal delivery by the entrepreneur and other. Seventy-eight percent of the respondents received food and beverage products via UPS. When asked what percentage of foods and beverages were received via UPS, respondents’ answers ranged from 5 percent to 100 percent with 18 of 31 respondents (58 percent) receiving UPS food and beverage shipments more than 50 percent of the time.

Figure 1 demonstrates the percentage of each type of delivery to the gift shop. By far, UPS was the method by which most gourmet and gift shops receive food and beverage shipments with FedEx and personal delivery by the entrepreneur following behind.

For the delivery method of “other” 3 percent received deliveries 1 or 2 times per week, while another 3 percent received them daily. The question of how often food and beverage products were received assumed that shipments arrived at least weekly; however, this only occurred for up to 10 respondents. Many respondents noted they received food and beverage products monthly to quarterly. A couple said seasonally or third-quarter only (in time for the holidays). 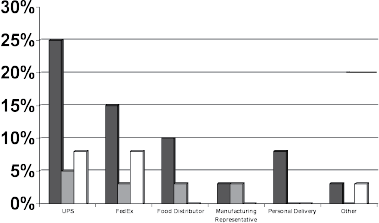 Many different payment methods were used by the respondents for delivery of food and beverage products. Payment by check was the most common method of payment used; about 50 percent of those surveyed (20 respondents) paid for their products in this manner. Thirty-eight percent, or 15 respondents, preferred the use of a credit card, paying upon receipt of the product or after. Five percent, or 2 respondents, chose to pay with cash. Eight percent, or 3 respondents, paid with another method.  When “other” was chosen, respondents paid with the following: prepay with credit card at time of order, open account, invoice and company credit.

By Christina Sciarrillo, Sam Emerson and Janice Hermann. Learn how to tell if information is unbiased and factual regarding health information.