Distinguishing Between Greater and Lesser Prairie-Chicken

The greater prairie-chicken (GPC) is a medium sized grouse that is about 16-18 inches in length and weighs 25-42 ounces. GPCs are overall drably colored for concealment with feathers that display a barring pattern that is buffy brown to black (Figure 1). Like all grouse, they have feathered feet. The males have prominent feathers called pinnae on their neck, a bright yellow eye comb, and a gular air sack on the side of their neck that is orange to yellow in color during the breeding season. The males inflate this air sack causing a booming noise, raise their pinnae feathers, and enlarge their eye comb in order to attract females for breeding. Females have less prominent eye combs and shorter pinnae feathers. Additionally, females have barring on the outer tail feathers as opposed to males which have solid black outer tail feathers. 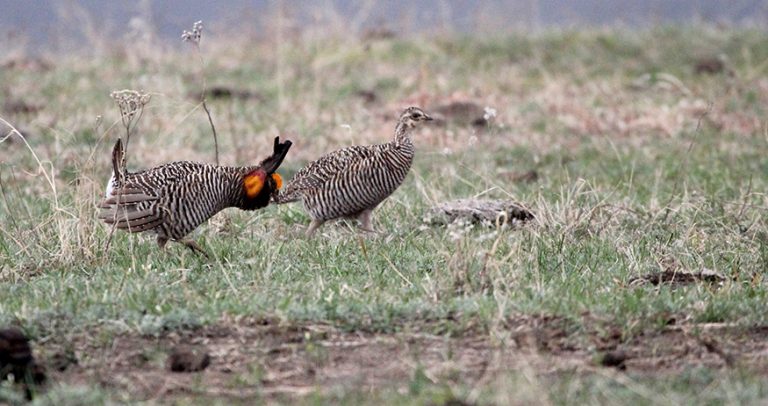 Figure 1. A male (foreground) and female (background) greater prairie-chicken on a lek. Notice the dark and complete barring on the breast of both of these grouse. Courtesy of Torre Hovick (Oklahoma State University).

The GPC primarily occurs throughout the Flint Hills of Kansas and Oklahoma, across most of northern Kansas, and in the untilled areas of central Nebraska and South Dakota (Figure 2). Scattered populations exist throughout the Midwest, the northern Great Plains, and northeastern Colorado. 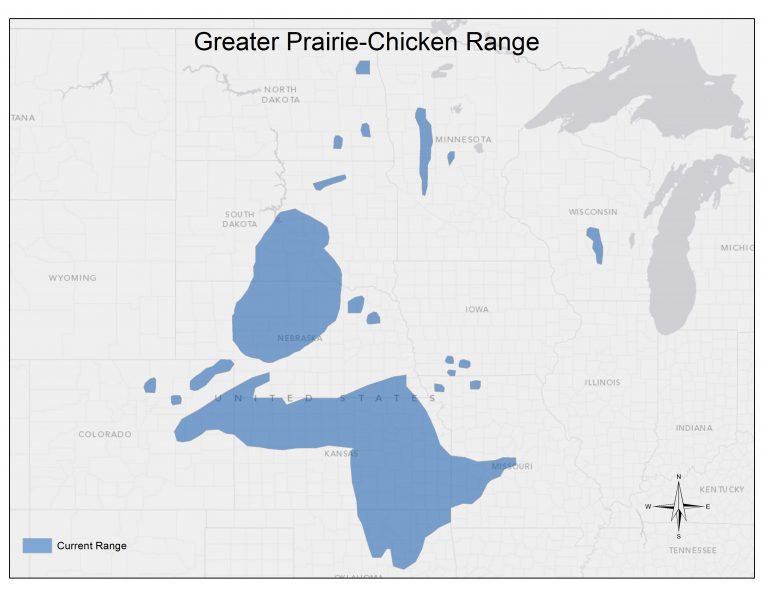 The GPC occurs primarily in large untilled areas of tallgrass or mixed-grass prairie. In some areas, Conservation Reserve Program land provides suitable habitat. GPC males gather on leks during the spring to attract females for mates. These are typically on elevated areas of the landscape that have limited vegetation. Shallow soils, crop fields, cattle watering or salting stations are all commonly used when available. Nesting females use residual grass cover from the previous year to hide a clutch of 11 to14 eggs in a shallow grass litter-lined depression on the ground. After hatching, chicks immediately begin to forage on insects as the female leads them. Areas with good overhead grass cover (i.e. knee high), minimal cover at ground level, and an abundance of flowering plants that harbor insects are best for chicks. Populatons of GPCs require large areas (thousands of acres) of native grassland to survive. Landscapes with limited row crops (approximately <30% of the landscape) and human disturbance are tolerated, at higher levels, GPCs begin to disappear from the area. For more detailed information on the GPC, see Ecology and Management of the Greater Prairie-Chicken E-969.

The GPC has been severely reduced due to loss of grasslands. Most of this loss was due to conversion to row crops and introduced pasture. Remaining grasslands are being fragmented by tree encroachment (such as cedar and Osage orange), oil/gas development, roads and urbanization, communication towers, and wind power development. GPCs can tolerate some minimal levels of fragmentation, but at higher levels, suitability of habitat is negatively impacted. It is important to minimize tree cover in grasslands, limit conversion of grassland to less than 30%, and minimize human structures in GPC habitat. GPC are compatible with livestock operations if stocking rates are conservative enough to leave residual grass to provide protective cover. Additionally, while fire is important to maintain grasslands, some residual grass should be unburned each year to ensure adequate nesting cover.

The lesser prairie-chicken (LPC)is a medium sized grouse that is about 15 to 16 inches in length and weighs 22 to 29 ounces. It is similar to the greater prairie-chicken in that its feathers display a barring pattern that is buffy brown (Figure 3). Barring across the breast is generally lighter and less complete than in the GPC (Figure 4). The males have prominent feathers called pinnae on their neck, a bright yellow eye comb, and a gular air sack that is reddish in color during the breeding season. Females have less prominent eye combs and shorter pinnae feathers. Similar to the GPC, females have barring on the outer tail feathers as opposed to males which have solid black outer tail feathers. 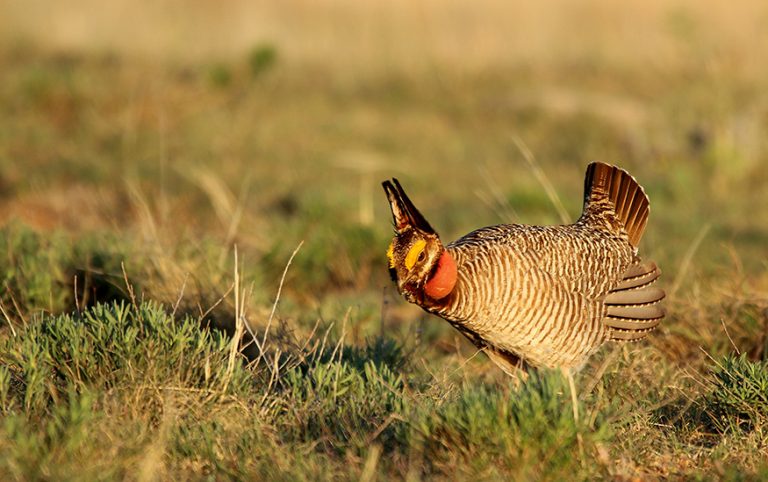 Figure 3. Male lesser prairie-chickens, such as the one shown here, have less prominent barring patterns on the breast. Also, notice the gular air sack is reddish in color as compared to the more orange color displayed by the greater prairie-chicken. Courtesy of Torre Hovick (Oklahoma State University). 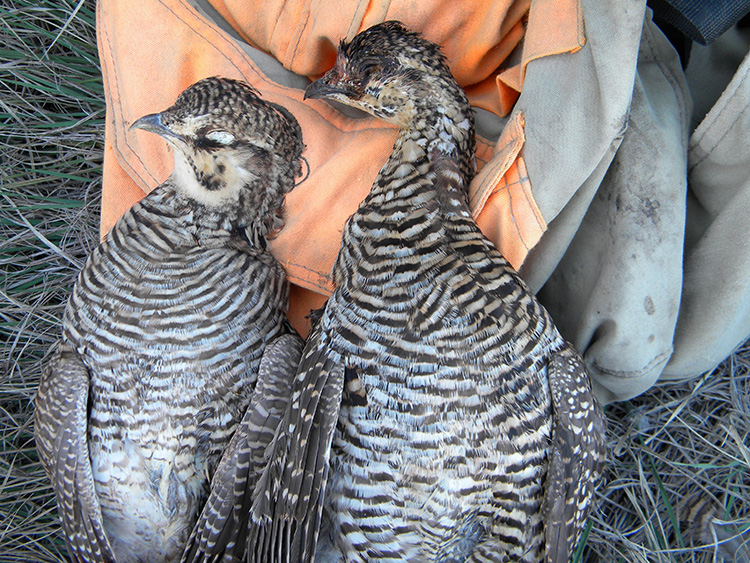 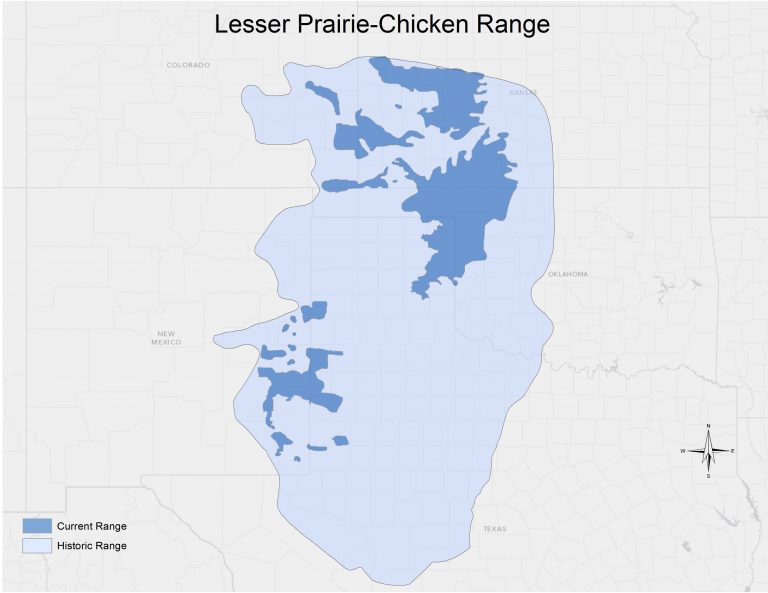 Figure 5. The lesser prairie-chicken is found in eastern New Mexico, West Texas, northwestern Oklahoma, western Kansas, and southeastern Colorado. In northwestern Kansas, its range overlaps with the greater prairie-chicken. Historically, both species occurred over a much broader area but likely did not have range distribution overlap. Courtesy of Allan Janus (Oklahoma Department of Wildlife Conservation).

The LPC occurs in a variety of native vegetation types. It is found in shinnery oak shrublands in New Mexico, Texas, and Oklahoma; sand sagebrush shrublands in Oklahoma, Kansas, and Colorado; and shortgrass and mixed-grass prairies, along with Conservation Reserve Program fields throughout its range. Similar to the GPC, the LPC males gather on leks during the spring. These are often on elevated areas with either shallow soils that limit plant growth, crop fields, or cattle source attractants (such as salt and water developments). Nesting females use residual grass cover or shrubs to hide a clutch of 11-14 eggs in a shallow grass litter lined depression on the ground. Chicks forage on insects as the female leads them to areas with suitable habitat. Areas with good overhead shrub or grass cover, bare ground under the cover, and an abundance of flowering plants that harbor insects are best for chicks. Populations of LPC's also require large areas (thousands of acres) of native grassland and shrublands to survive and they begin to decline when habitat is fragmented. For more detailed information on the LPC, see Habitat Evaluation Guide for the Lesser Prairie-Chicken E-1014

The LPC, like most grouse species, has been negatively impacted by land-use changes. Historically, conversion of grasslands and shrublands to row crops reduced much of the habitat for this species. Some of this land has subsequently been converted back to grassland under the Conservation Reserve Program and is now occupied by limited numbers of LPCs. Extensive encroachment of eastern redcedar and mesquite into grassland has reduced habitat suitability. Fragmentation of remaining habitat has been extensive. Sources of fragmentation consist of cedar encroachment, oil/gas development, roads and urbanization, fences, communication towers, and wind power development. These structures tend to limit use of otherwise suitable habitat by LPCs. To maintain LPC populations it is important to limit fragmentation or conversion of native grasslands and shrublands. Native grasses, rather than exotic grasses such as Old World Bluestem and weeping lovegrass, should be utilized when converting crop fields back to grassland.

GPC and LPC have an overlapping range in west central Kansas. Hybrids have been documented within this area (Figure 6). Plumage and vocalizations are intermediate between the two species. It is likely that habitat requirements and threats are the same as each parent species within this overlapping range. It is unknown if hybrids produce offspring. Hybrid males regularly attend leks, but have rarely been documented at central breeding locations on the lek. Therefore, it is likely that if hybrid genetics are passed on it occurs through female hybrids. 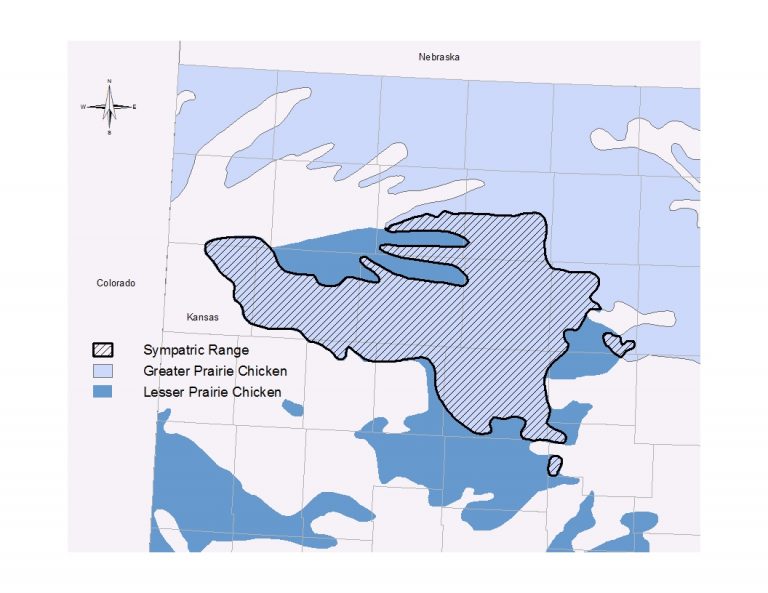 YESNO
Fact Sheet
Ecology and Management of the Greater Prairie-Chicken

This circular contains information on the ecology and management of Greater Prairie-Chickens in Oklahoma and surrounding areas.

This circular discusses the Lesser Prairie-chicken, and ways to develop and protect the habitat.