Pine trees are appealing additions to the landscape as they provide year round color and versatility. However, pine trees are susceptible to environmental stresses including drought. This stress predisposes pine trees to the disease Diplodia tip blight and canker. When left uncontrolled, the disease may disfigure or kill a tree over several years.

Diplodia tip blight and canker is most common on mature trees (15 years or older). The symptoms begin in the spring (usually April) when new needles are killed as they emerge and elongate. The stunted needles turn yellow and then brown (Figure 1). White, crusty resin droplets may be visible on killed needles and shoot tips (Figure 2). As the disease progresses, it invades the twigs and causes branch flagging (Figure 3). As years go by, the disease progression is indicated by death of larger branches and/or large portions of the tree (Figure 4). Resinous cankers may be visible on larger branches (Figure 5).  In late summer or fall, fruiting structures may be visible at the base of stunted, brown needles or on the cone scales (Figure 6). 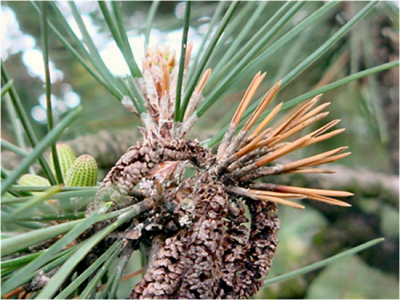 Figure 1. Pine needles are stunted and killed as they emerge in the spring. 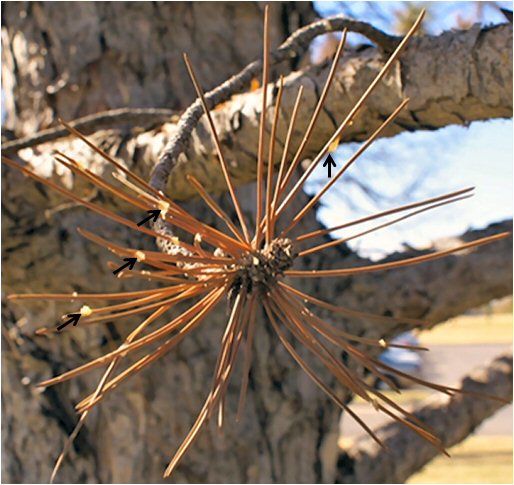 Figure 2. Drops of white to amber colored resin are indicated by arrows on the needles of this pine shoot. 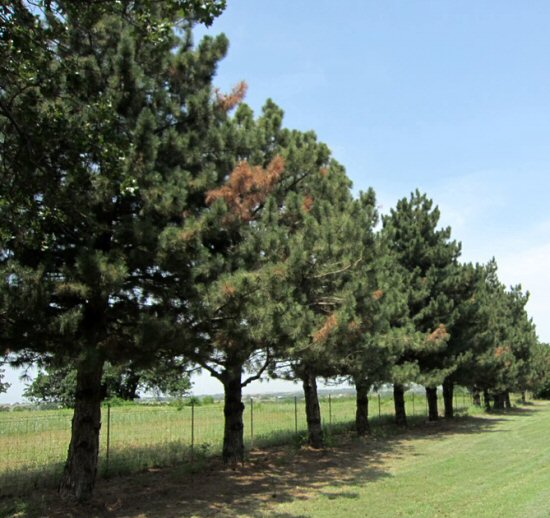 Figure 3. Several branches on the pine trees in this windbreak are flagging (wilting and browning) due to Diplodia tip blight and canker. 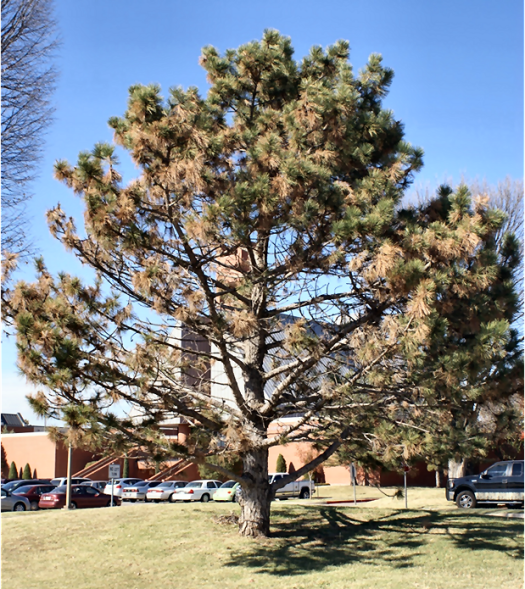 Figure 4. Diplodia tip blight and canker progresses over several years so that large parts of the tree are blighted or the tree may be killed. 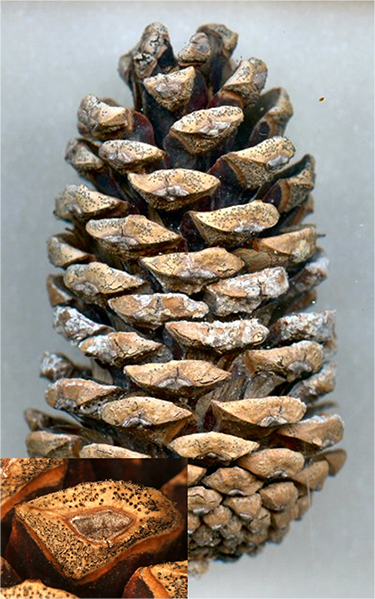 Diplodia tip blight and canker is caused by the fungus Diplodia pinae (previously known as Sphaeropsis sapinea). The fungus survives in diseased shoots and branches or on pine cones, and produces pycnidia (fruiting structures) which release conidia (spores) that are dispersed in splashing water and short distances by wind. As the new pine needles emerge in the spring, they become infected through stomata (small openings in the needles for gas exchange). The spores may also enter through wounds or cracks in the bark. Free moisture is required for infection, so the disease is more severe in years with rainy springs. Latent (asymptomatic) infections occur and the disease symptoms may appear after several months or longer.

Diplodia tip blight and canker is most severe on trees that have been stressed by drought or other environmental factors. Proper tree care including irrigation during periods of drought and maintaining fertility, reduces the likelihood of Diplodia tip blight infections.

Pruning and sanitation are often effective methods for control of Diplodia tip blight and canker, especially when trees are newly infected.  Diseased shoots should be removed as soon as they are noticed. It is best to prune during dry weather periods to prevent disease spread, and pruning cuts should be made 8 inches or more below visible damage into healthy wood.  Pines do not have dormant buds on the older, barren portions of the trunk, so avoid pruning beyond shoots with needles; cutting all the green needles off pines will kill the plants. Pruning tools should be cleaned with a household disinfectant between cuts to prevent spread of the disease. Discard diseased clippings by burning or in the trash.

Where infections have been severe, fungicides may facilitate disease control.  A fungicide containing copper hydroxide should be applied early in the spring as the buds open, and at least once more as the needles elongate at seven- to ten- day intervals. Additional products may be registered in your area. Consult your local county Extension office for current recommendations. Longer needled pines may need a total of three applications. Fungicides should be applied yearly in the spring to prevent new infections. Depending on the size of the tree, home gardeners may need to hire a professional to ensure adequate spray coverage.