The causal agent of grape crown gall was first identified in 1897 in Italy. In those investigations, a bacterium was identified as the infectious agent causing disease of the vines. Since this discovery, it has been demonstrated that crown gall of grape is caused predominately by the bacterium Agrobacterium vitis. However, A. tumefaciens (the predominant causal agent of crown gall of other crops) has also been isolated from galls on grape and is associated with the disease at a much lower frequency than A. vitis. Reports of grape crown gall have come from many parts of the world including China, Japan, South Africa, several European countries, the Middle East, and North and South America. In Oklahoma, crown gall is probably the second most significant disease of grape after black rot.

The most prevalent and identifiable symptom of Agrobacterium infection is the formation of galls. Galls typically form at points of injury or at graft unions near the soil surface (Figures 1 and 2). While many galls will form low on the vine near the soil surface (Figure 1), gall formation is possible on cordons or canes in the trellis (Figure 3). Infection by the bacterium results in the abnormal expansion and shape of the plants cells at the site or near the site of infection. Actively expanding galls will be comprised of white fleshy tissue (Figure 2). Older galls will become dry and cork-like, and depending on the age, can become brittle and flaky (Figure 3). Bark cracking and peeling may also be associated with gall development (Figure 3). Gall symptoms can progress slowly and result in reduced vine vigor. Eventually vine loss can occur due to girdling as a result of gall formation. In some cases gall formation can be quite rapid, causing complete girdling and loss of the vine in a short period of time. Aerial root formation has also been associated with crown gall disease. 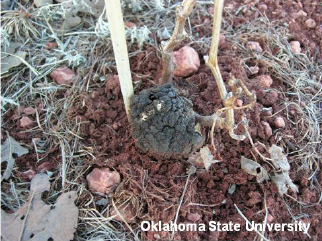 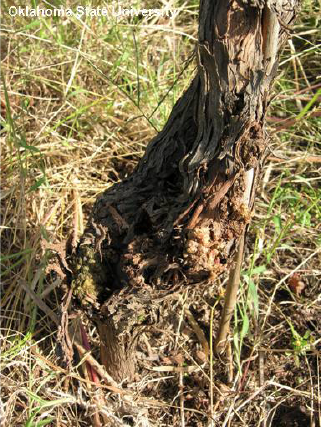 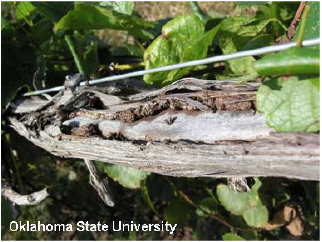 Figure 3. Corky galls and cracking of bark on a cordon in the trellis.

One of the most important characteristics of A. vitis is its ability to move and survive internally throughout the vine. Termed ”systemic survival,” this feature allows the bacterium to take advantage of injuries induced by freeze damage or other wounding, causing disease not only at the soil level, but also in the aerial parts of the plant canopy. In the spring, as sap begins to move into shoots from the roots, bacterial cells are transported throughout the plant. Bacteria can also be disseminated in apparently healthy cuttings. Vines can remain asymptomatic for several years until conditions favorable for disease development occur, such as wounding by freeze damage. Galls can also form at sites of disbudding, at the base of rooted cuttings, and at grafts. Galled vines will exhibit reduced vigor and yield. The bacterium also has the capability of causing death (necrosis) of roots and severe infections can kill entire vines. A. vitis can survive without living plants for several years on grape debris in the soil. As a result, eradication of the pathogen from an infested vineyard can be difficult. Research in Italy and New York has investigated A. vitis infestation in wild grape populations. In both studies, wild grape vines were not implicated in the maintenance of inoculum that resulted in the direct infection of commercial vineyards. Most inoculum originates from infested planting material or soil containing infested grape debris.

How does A. vitis infect grape vines?

Using cultivars resistant to crown gall is one of the best tools a grower can use to manage crown gall in a vineyard.  Susceptibility to A. vitis varies among grape cultivars grown in Oklahoma.  In general, Vitis vinifera varieties are very susceptible to crown gall while many American cultivars and French-American hybrids have some genetic resistance to the pathogen (Table 1).  Research in other areas of the U.S. has demonstrated that grafting of susceptible scion to resistant rootstock significantly reduced the incidence of crown gall under field conditions.  While not well understood, the apparent resistance in the susceptible scion may be a result of reduced survival of A. vitis in the resistant rootstock or the production of compounds by the rootstock that are inhibitory to the bacterium.  For more information about choosing rootstocks adequate for Oklahoma production, consult OSU Cooperative Extension Fact Sheet HLA-6253 “Rootstocks for Grape Production.”

Regardless of the scion or rootstock susceptibility, care should be taken to plant material free of the crown gall pathogen when establishing or replanting a vineyard. Hot water treatment of dormant cuttings has been used with limited success.  While hot water at temperatures of approximately 50˚C (122˚F) can reduce the amount of bacteria in cuttings, all bacterial cells cannot be eliminated. Furthermore, damage can occur to fully dormant cuttings if temperatures higher than 50˚C (122˚F) are used.

Shoot tip propagation has been used with some success to produce A. vitis free planting material. Researchers have been unable to detect the bacterium in green shoots.  In New York, vines propagated from green shoot-tip cuttings remained free of crown gall under cold climate conditions even after 7 years of growth. This form of propagation may prove useful for Oklahoma producers looking to maintain their own high-quality disease free planting stock. An alternative is to purchase certified free stock.  While using certified stock is considered a good management practice, be aware that the certification only means that the bacterium was not detected and there is no complete guarantee that stock will be completely free of bacterial cells.

a Susceptibility ratings and cultivar were compiled from the “Midwest Commercial Small Fruit and Grape Spray guide, 2007” and OSU circular E-999, “Profiles and Challenges of the Emerging Oklahoma Grape Industry.”

Cultural practices that result in limiting mechanical and freeze injury have proven most useful for managing this disease. Proper site selection is critical for new plantings. Avoid heavy soils in wet areas where frost is likely (low areas). Limiting exposure to the north is also desirable for cold-tender cultivars. Good sanitation practices when removing infected vines is critical. Care should be taken to remove as much of the plant root system as possible. The crown gall pathogen can be present at high levels in the root system of infested plants. Removing and destroying as much of the plant debris as possible will reduce the level of pathogen propagules in the soil. The success of management strategies such as leaving soil fallow for extended periods or planting non-hosts to rid vineyards of the bacterium will have varying success depending on the level of infestation. Care should be taken to limit soilborne nematode damage. Studies have shown that crown gall incidence was positively correlated with root-knot nematode damage. Growers should have soil in potential vineyard sites tested for root-knot nematode prior to planting. Areas with infestations of root-knot nematode should be avoided.

For more information pertaining to growing grapes in Oklahoma or the status of the vineyard and winery business in Oklahoma consult the OSU circular E-999 “Profiles and Challenges of the Emerging Oklahoma Grape Industry” and the OSU grape and wine research and extension webpage at http://www.grapes.okstate.edu.

Information about diseases that infect grapes and directions for samples that need to be sent to the Plant Disease and Insect Diagnostic Lab for testing.

How to implement different augmentation approaches for biological control of pests and descriptions of each for proper selection.