The Genetic Basis for Increased Productivity

Considerable research by various State Agricultural Experiment Stations and the USDA has clearly demonstrated the potential for increasing beef cattle productivity through crossbreeding. Consequently, the use of crossbreeding for the commercial production of beef is rapidly increasing.

There are two ways that crossbreeding can result in increased production levels. Crossbreeding provides the breeder the opportunity of combining the desirable characteristics of two or more breeds, thus achieving a higher overall performance level of desired traits among the crossbred animals than would generally be found within a given breed. This is frequently called breed complementarity, which refers to the strong points of one breed complementing or covering up the weak points of the other breed. The second way crossbreeding increases productivity is through the increased levels of performance for particular traits due to heterosis. Increased productivity can result through heterosis exhibited by both the crossbred calf and the crossbred cow.

Although heterosis is expressed by individual crossbred animals for various traits, only a few matings will not provide satisfactory estimates of the amount of heterosis for particular traits. In order to obtain dependable estimates of heterosis, performance must be measured on large numbers of crossbred and straightbred animals that are managed under the most uniform environmental conditions possible, with animals of comparable merit being involved in both kinds of matings. The requirements for dependable heterosis estimates are stressed in order to caution against drawing conclusions when the crossbreds and the straightbreds originate from different sources, or do not perform at the same time or place.

Several well-designed research studies have been conducted to estimate heterosis for various economically important traits. The average estimates of heterosis for some of the traits are presented in Table 1. Not all traits exhibit the same degree of heterosis. Generally, the greatest benefit from heterosis is realized for traits with low heritability, like reproductive performance of the cow and livability of the calf. Highly heritable traits like feed efficiency and carcass quality exhibit little or no heterosis.  This same general pattern would be expected for all breed crosses even though the actual amount of heterosis for a particular trait may vary some from one breed cross to another.

It has previously been pointed out that heterosis is measured in terms of the increase of the crossbred animals relative to the average of straightbreds. From a practical production standpoint, however, the producer should be interested in how much the crossbred outperforms the highest producing straightbred.

Although most crossbreds will exhibit some heterosis, their level of performance for every trait will not necessarily exceed that of the best straightbred. An example of this is growth rate in Charolais X British crosses. In such situations, the justification for making these kinds of crosses will be for combining the desirable characteristics of the two breeds rather than the heterosis exhibited for the trait.

Based on the accumulated experimental data, it appears that total production per cow in terms of pounds of calf weaned per cow in the breeding herd can be increased by 20 to 25 percent by systematic crossbreeding systems involving the three British breeds (Hereford, Angus and Shorthorn). About half of this increase in total production is dependent upon use of the crossbred cow to take advantage of heterosis for fertility and maternal performance.

Table 1. Summary of heritability and heterosis estimates for some economically important traits.

The genetic effects of crossbreeding are the opposite of the genetic effects of inbreeding. Inbreeding results in depression with lowered rate of reproduction, reduced calf viability, rate of gain, delayed sexual maturity and delayed attainment of body maturity. In general, the same traits that exhibit the most inbreeding depression (low heritability traits like reproductive performance) are the same traits that exhibit the largest amount of heterosis under crossbreeding.

There are two basic genetic requirements for a trait to exhibit heterosis: (1) There must be genetic diversity between the breeds crossed and (2) there must be some non-additive gene effects present for the particular trait involved. The failure of either one of these conditions being fulfilled for a particular cross for some trait would result in that trait exhibiting no heterosis. In such a case,  the expected performance of the crossbred offsprings  would simply be the average of the performance levels of the particular straightbred parents involved in the cross.  For those traits that express heterosis, the magnitude of  heterosis will be dependent upon how much genetic diversity exists between the two parent breeds.

Genetic diversity refers to the degree of genetic similarity  or dissimilarity that exists between the two breeds. Breeds that have similar origins and that have been subjected to similar types of selection pressure during their development will be expected to be much more alike genetically (small amount of genetic diversity) than would breeds that have quite different origins and have been selected for different purposes during their development.

Non-additive gene effects expressed in a trait are  caused by the level of dominance that exists between the different genes at a particular location on chromosomes.  The levels or kinds of dominance that can exist between  two different genes at a locus is illustrated in Figure 1. In  this illustration the more favorable gene (the one having  the biggest effect on increasing the performance level for the trait) is symbolized as A, and the less desirable gene (the one haling a smaller effect) is symbolized as a. The non-additive gene effects at individual loci (gene pairs) can be caused by complete dominance, partial dominance and overdominance. If the gene effects are strictly additive, the effect of the heterozygote (Aa) is exactly intermediate between the effects of the two homozygous geneotypes (AA and aa) as illustrated in Figure 1. Loci  (gene pairs) with this kind of gene action will not make  contributions to heterosis. Complete dominance is a very common genetic property that exists when the effect of the heterozygote is closer to that of one of the homozygotes without being exactly the same. Overdominance describes the situation whereby the heterozygote has a more extreme effect than either homozygotes. (As illustrated in Figure 1, the effect of Aa exceeds that of both aa and AA).  To whatever extent they occur, gene pairs that exhibit overdominance would have a relatively large effect on the  amount of heterosis exhibited by a trait. It is not really known, however, how prevalent gene pairs exhibiting  overdominance are among the many loci that control livestock performance traits. Although some examples of overdominant gene pairs are known, this phenomenon is  not nearly as frequently encountered as in the case with  partial to complete dominance.

Epistatic gene action involved gene combinations at  one locus (gene pair) interacting with the effects of gene combinations at other loci (gene pairs). There are many  different kinds of epistatic effects but their relative influence has been very difficult to measure because of their complexity. It seems doubtful that these epistatic effects would be the primary cause of heterosis in the case of most traits.

The most practical procedure for making use of  heterosis in beef cattle appears to be the continued maintenance of breeds or lines and crossing them to find  those combinations that yield the highest performance levels under the wide range of existing environmental and  management situations. Such a procedure will work regardless of which kinds of non-additive gene effects are responsible for the heterosis.

Because of the increased heterozygosity involved in  the crossbred individual, intermating among crossbred  individuals results in increased genetic variation. Consequently, crossbred populations are less likely to breed true than are straightbred populations. The general result  of intermating crossbreds is a reduction in the numbers of  heterozygous gene pairs and consequently a regression toward the average performance of the original straightbred parents. Thus, it seems very difficult, if not  impossible, to fix heterosis, that is, to maintain heterosis  and its resulting high performance by mating those  crossbred individuals having the highest degree of heterosis. Consequently, to fully capitalize on increased productivity due to heterosis, it is necessary to remake the crosses among straightbreds each, generation. 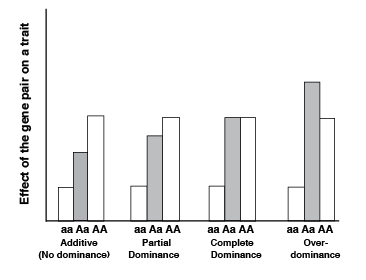 Figure 1. Illustration of kinds of gene action that can occur at a particular locus (gene pair).

Practical Use of Crossbreeding

Crossbreeding is a system of mating that provides the commercial producer the opportunity of increasing total production of beef per cow in the breeding herd. Crossbreeding is not a substitute  for good management, nor is it a cure-all for unproductive cattle. If anything, a good crossbreeding system  will probably require a higher level of management in  order to reap maximum benefits. The producer will need  to be alert for possible changes in the herd’s nutritional  program as his herd becomes populated with more productive cattle. Some producers expect crossbreeding to do more than it really can. The same basic breeding principles should be applied to the selection of breeding animals  for a crossbreeding system that would be used for a  straightbreeding program. In both cases, use of genetically superior breeding stock will result in progeny with above average performance. In other words, once the decision has been made as to which breeds to involve in  the crossbreeding program, the producer should select the  best animals available from within these breeds. For example, if weaning weight is the trait of interest, and the decision has been made to cross breeds A and B, the  producer can expect a higher weaning weight among his crossbred calves if he selects animals with above average weaning weights from breeds A and B than if he uses  animals having below average weaning weights. To illustrate, if the animals to be mated from breed A had an average weaning weight of 510 lbs., and those from breed B average 490 lbs., the expected weaning weight of future crossbred progeny would increase about 5% due to heterosis (510 + 490) / 2 x 1.05 = 525 lbs. On the other hand, if below average individuals are used, for example animals having an average  weaning weight of 390 lbs. from breed A and 410 lbs.  from breed B, the expected crossbred progeny performance would be (390 + 410) / 2 x 1.05 = 420 lbs. The  preceding example assumes the same environmental effects  for the parental and progeny generations. If a producer continues to use cattle of about the same relative genetic merit as he had under a straightbred program, crossbreeding will increase overall production by approximately the amount of heterosis present for the production traits of interest (Table 1).

The combination of complementarity between the  strains or breeds crossed and the added impact of heterosis makes crossbreeding a very important breeding  system for commercial production systems. The experimental evidence strongly indicates that the total pounds of calf produced per cow in the breeding herd can be increased through a planned crossbreeding scheme.

Learn how the beef cattle industry will be impacted by the coronavirus pandemic.