Historic production acres of grain sorghum and corn in the Oklahoma Panhandle are presented in Figure 1. Prior to 1989, grain sorghum was the dominant irrigated summer crop with as many as 116,000 acres of production in 1980, which is approximately equal to the current number of acres producing irrigated corn today. 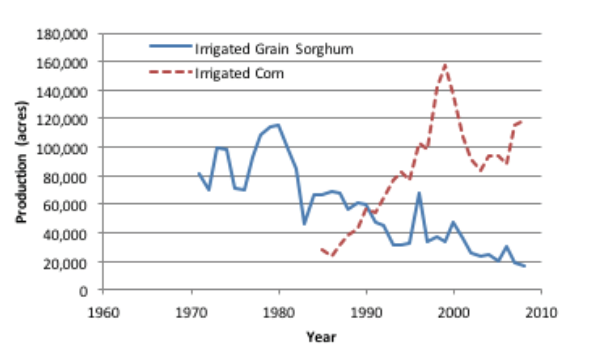 Figures 2 and 3 show the average yields for corn and grain sorghum in the Panhandle region and provide explanation for the adoption of corn as the dominant irrigated summer crop. Namely, the increase in corn yields from an average of 100 bushels per acre during the 10 years prior to 1980, to the current average of approximately 175 bushels per acre. In contrast, the average irrigated grain sorghum yields between 1971 and 1980 was 73 bushels per acre and only increased slightly to an average of 81 bushels per acre between 1999 and 2008. The increase in yields for both grain sorghum and corn between the 1950s and 70s is noteworthy because it results from a rapid increase in the number of wells and the adoption of center pivot technology. This combined with the public investment in the development of corn genetics to increase yield and crop protection options has allowed corn to become the dominant irrigated crop in the panhandle, while grain sorghum has been slowly lost from irrigated production. 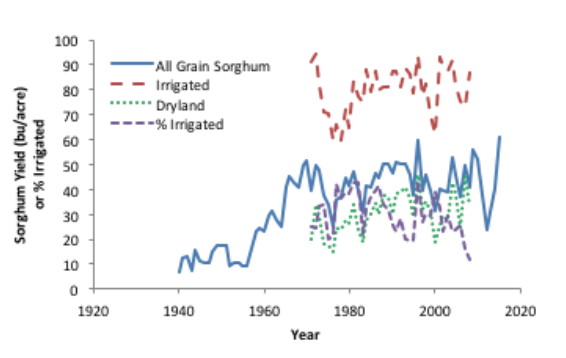 Figure 2. The historic average yield for all grain sorghum grown in the panhandle, the dryland and irrigated yields, and the percentage of the grain sorghum grown under irrigation (Data, from National Ag Statistics Service for Beaver, Texas and Cimarron Counties). 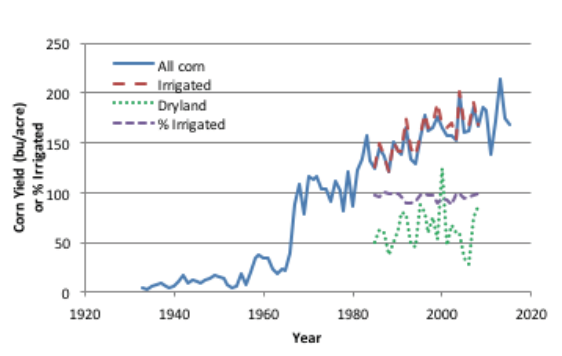 Figure 3. The historic average yield for all corn grown in the panhandle, the dryland and irrigated yields, and the percentage of the corn grown under irrigation (Data, from National Ag Statistics Service for Beaver, Texas and Cimarron Counties).

Sorghum hybrid yield performance trials have been conducted at the Oklahoma Panhandle Research and Extension Center (OPREC) since 2005. Yield data from these trials, along with corn hybrid performance trial yields are presented in Table 1, with both the average and maximum yield achieved across hybrids presented. The average values in this table are the average yield across all hybrids. The maximum value represents the yield achieved by the highest yielding hybrid in that year. Comparison of this yield data to that in Figures 2 and 3 show that the on-farm yields for grain sorghum (Figure 2) have not kept pace with the genetic potential of modern grain sorghum hybrids developed by recent breeding efforts. In fact, data from 2005-2008 shows that the average on-farm yields for the panhandle region was approximately 50 percent of what was achieved with experimental conditions during the same time period. In contrast, on-farm corn yields were 87 percent of the average yields achieved with experimental conditions.

It is apparent that, along with the loss of irrigated grain sorghum acres since 1980, the panhandle has experienced a stagnation of irrigated grain sorghum yields. This could have occurred for a variety of reasons such as grain sorghum being grown on poorer soils, less than optimum irrigation or less than optimum fertility. Historically, the relegation of grain sorghum to the lower production soils and limited inputs was a rational choice because of the more rapid improvement in yield potential and crop protection options for corn that could be combined with its tremendous response to irrigation under fully irrigated production. In the past, the grain sorghum industry has marketed the crop as a choice for low-input production as a lower risk option for production environments that cannot support corn production. The loss of irrigation capacity to levels below optimum for corn is a situation that warrants consideration for the transition from corn to grain sorghum. However, agronomic production conditions conducive to yields similar to those in the sorghum hybrid performance trials must be provided to allow for high yield grain sorghum production.

Crop Insurance as a Limitation for Grain Sorghum

Historically, grain sorghum was an important irrigated crop in the Oklahoma Panhandle. However, with the expansion of irrigation, adoption of efficient irrigation in the form of center pivot and the public investment into genetics for high-yielding corn with excellent crop protection characteristics, has resulted in corn now being the dominate irrigated summer crop. As a result, corn yields continue on an upward trend. Crop insurance coverage appears to provide good risk protection for corn, which allows producers to make the input investments required to realize its yield potential.

In contrast, grain sorghum yields have stagnated, with no trend in increasing yields based on data from the National Ag Statistics service in the last 40 years. These low yields are responsible for the T-yield of approximately 80 bushels per acre being well below the potential yields demonstrated in hybrid performance trials conducted in the panhandle. Therefore, producers do not have protection from loss of the increased input cost associated with growing high yielding grain sorghum. This, in turn, represents a limitation to future efforts to maximize the economic value of the irrigation water remaining in the Ogallala. Producers can overcome the lack of “good” crop insurance by growing grain sorghum under high-yielding conditions to develop a proven yield. Four crop years of yield history per farm will be required to achieve a proven yield history. Therefore it may be most useful to grow it on small acreages in rotation with corn, wheat or other crop with effective crop insurance. A minimum acreage requirement is not known, but producers should consult their crop insurance agent before planning their strategy.

The use of uniform germination and emergence in corn plants for optimizing corn yields.