Considerations When Rotating Wheat Behind Corn

Crop rotations can provide tremendous benefits to Oklahoma wheat growers, especially those using no-till methods. Rotational crops are very effective at breaking weed and disease cycles and spread risk by diversifying production and marketing cycles. Corn is frequently used as a rotational crop in northeastern Oklahoma and irrigated fields in the Panhandle. Corn has also grown in popularity in central and western Oklahoma in recent years. Much of this increase in acres is due to better corn hybrids and improvements in no-till planting equipment. While corn provides a good rotational crop for wheat farmers, there are some important potential stumbling blocks that can arise when sowing wheat into corn residue. This fact sheet will discuss three of the most prevalent wheat disease problems that can potentially derail a wheat crop sown into corn residue.

Many wheat farmers are familiar with wheat streak mosaic virus (WSMV) & the high plains virus (HPV). WSMV and HPV are transmitted by the wheat curl mite. Mites and these viruses survive in crops such as corn, as well as many grassy weeds and volunteer wheat. In the fall, mites spread from these crops to emerging seedling wheat, feed on that seedling wheat, and transmit the virus to the young wheat plants. Effects of WSMV or HPV transmitted to wheat in the fall are devastating, as the wheat plant is either severely damaged or killed by the next spring (Figure 1). In fact, data from experiments conducted at OSU reveal that fall infections typically cause as much as 55 percent yield loss while spring infections cause as little as 16 percent yield loss (Figure 2). 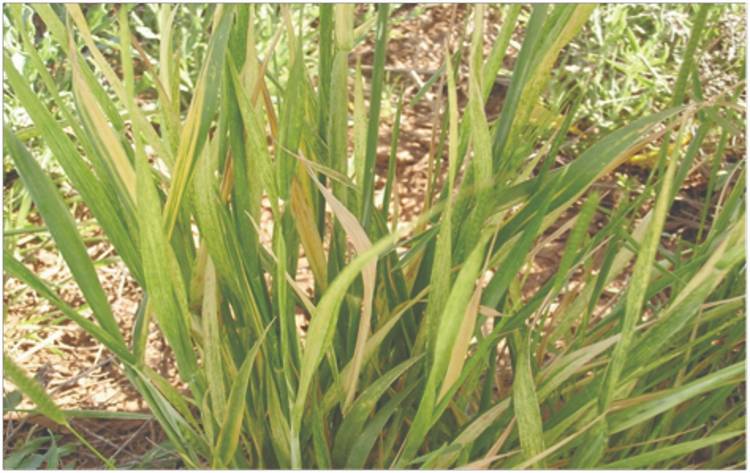 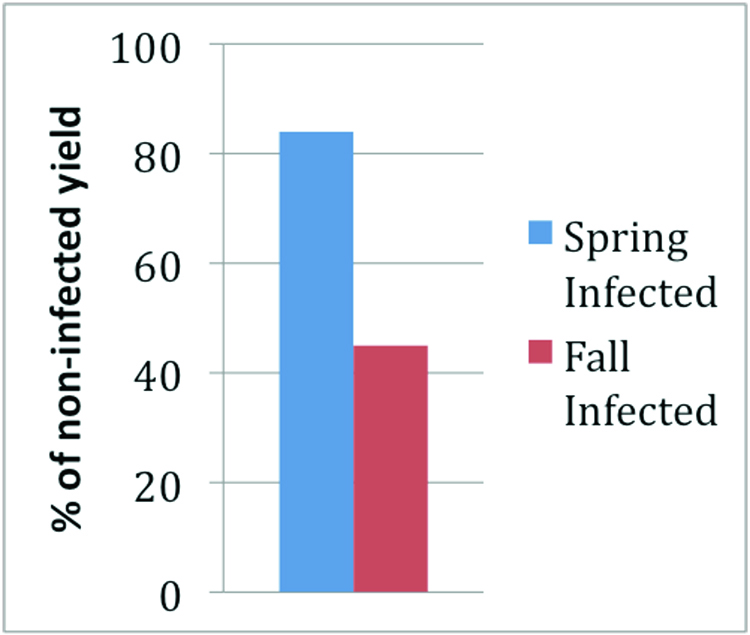 Wheat seed treatments are not effective in controlling WSMV or HPV. However, integrated pest management strategies such as planting later in the fall can reduce the likelihood of infection. A good rule of thumb is to sow after October 1 north of I-40 and after October 15 south of I-40. Since corn and volunteer wheat can serve as the green bridge that allows the wheat curl mite to infect seedling wheat, it is critical to completely kill corn or volunteer wheat at least two weeks prior to sowing wheat. This strategy is effective because wheat curl mites have a life span of 7 to 10 days (Figure 3). Thus, chemical or mechanical destruction of corn and/or volunteer wheat at least two weeks prior to emergence of seedling wheat should greatly reduce mite numbers in the fall. For more information on WSMV and HPV, go to the Plant Disease & Insect Diagnostic Laboratory web page at: http://www.ento.okstate.edu/ddd/hosts/wheat.htm. 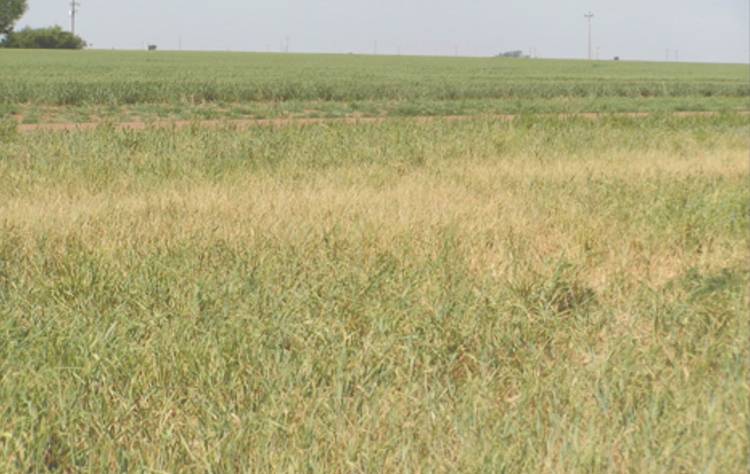 Figure 3. Early-sown, dryland wheat (foreground) with significant damage from WSMV and HPV. This is in contrast to the healthy late-sown, irrigated wheat field in the background. Photo courtesy of Dr. C. Rush, Texas A&M University.

Another potential pitfall commonly associated with wheat following corn is Fusarium Head Blight (FHB). Wheat farmers in the eastern and northcentral U.S. are acutely familiar with FHB and the devastating effects it can have on a wheat crop. Wheat farmers in the Southern Plains, however, have largely avoided this disease in the past.

As the name indicates, FHB is caused by a group of fungi known as Fusarium. These fungi, which are also sometimes called Gibberella, also cause diseases in corn such as Gibberella stalk rot and Gibberella ear rot. Breeding efforts have reduced the effect of these diseases on corn yield; however, Fusarium is still frequently present on corn residue. If this residue is left on the soil surface, as would be the case in a no-till or minimum-till production system, it serves as a source of Fusarium spores for infection of wheat (Figure 4). While FHB is most frequently associated with wheat following corn, Fusarium can also be present on small grains residue and FHB can occur in fields that have been sown behind crops other than corn. 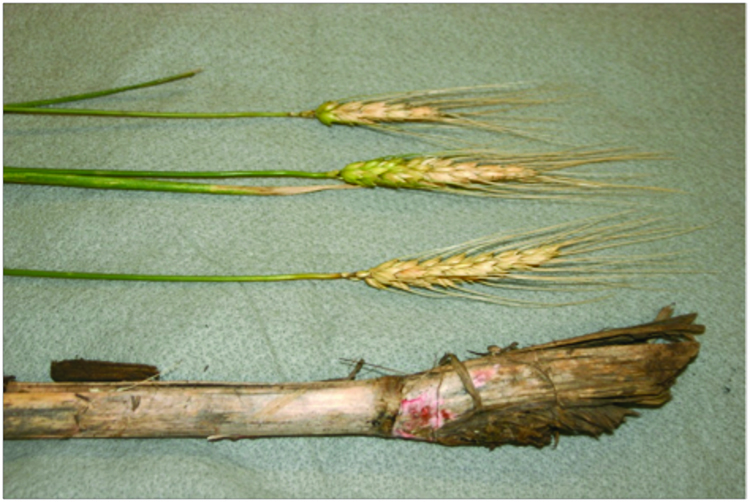 Wheat is most susceptible to FHB at the flowering stage of development, although some infection can still occur after flowering. Air temperatures between 65 and 86º F and moist conditions favor reproduction of the fungus on crop residues and infection of the wheat crop. Having these environmental conditions during flowering are most likely in eastern Oklahoma and less likely west of I-35. A Fusarium Head Blight risk assessment tool is available at www.wheatscab.psu.edu and can be used to assess the frequency with which favorable environmental conditions for FHB might occur.

There are several options for reducing the likelihood that FHB will impact your wheat crop. If tillage is an option, the burying of crop residue will reduce the amount of Fusarium present for infecting wheat. If tillage is not an option, altering rotations such that wheat is sown following a legume crop rather than a grass crop will reduce likelihood of FHB infection. Another option is to rotate to a non-susceptible crop such as winter canola or rapeseed. Some fungicides have shown efficacy in reducing incidence and severity of FHB. Timing of the fungicide application for FHB control, however, is critical and is generally later than the optimal timing for control of foliar disease in Oklahoma. Similar to spring freeze injury, it is wise to spread acres evenly among wheat maturities, as environmental conditions might not be favorable for FHB development during flowering of all varieties. Finally, some crop insurance policies include protection against crop losses associated with FHB.

In summary, crop rotation is a powerful tool in increasing crop yield and combating weeds and disease. There are some potential disease problems that can occur when rotating small grains following corn. Farmers should be aware of the risks and take measures to reduce risk whenever possible. For most farmers, however, the risk of WSMV, HPV, or FHB should not be viewed as a reason not to rotate or use no-till methods.