Tomatoes are susceptible to numerous disorders that resemble diseases, but are not caused by a living pathogen such as a fungus or virus. Plant pathologists commonly refer to such disorders as abiotic, physiological, or noninfectious diseases. These are mostly caused by adverse environmental, chemical, or soil factors that result in abnormal plant growth and development. A non-infectious disease is not contagious, therefore it does not spread from plant to plant and increase over time. However, non-infectious diseases can be serious when plants are uniformly exposed to a high level of the stress factor. In some cases, normal growth and development may return once the stress or adverse environmental condition is removed or corrected. Non-infectious diseases of tomato that have been commonly observed in Oklahoma are described below along with strategies for their management.

Affected blossoms dry, turn brown, fail to produce fruit, and may fall from their small stems (pedicels). Blossom drop has been associated with environmental stresses and improper soil fertility that inhibit flower pollination. Prolonged periods of high temperatures (above 90 F) and wind during the day are associated with blossom drop. However, night temperatures may be most important for effective flower pollination. Night temperatures outside the range of 55 F to 70 F inhibit effective pollination and promote blossom drop. Excessive nitrogen fertilization encourages lush vegetative growth and inhibits flower production and/or pollination.

Control: Following recommended fertilizer rates for tomatoes reduces blossom drop, but if excessive heat and wind develop during flowering, little can be done. Heat-tolerant cultivars have recently been developed which may reduce blossom drop caused by high temperatures. Shading and overhead watering can reduce temperature, but their value decreases under prolonged periods of high temperature.

Blossom-end rot is an easily recognized disorder of tomato. Fruit are most commonly affected when they are about half grown. Symptoms begin as small, tan, water-soaked area near the blossom end of the fruit. The spot enlarges, darkens, and becomes sunken and leathery (Figure 1).  Affected fruit often ripen prematurely and are prone to invasion from secondary, fruit-rotting pathogens.

Blossom-end rot is a complex disorder thought to be caused by a localized calcium deficiency in the blossom end of the fruit. Calcium is required in large amounts in the growing parts of plants. When rapidly growing fruit lack adequate calcium, tissue breakdown results. Calcium is water-soluble and moves with the plant’s water stream. Under hot and windy conditions, water movement and use is rapid. Since fruit do not transpire water as efficiently as leaves, calcium availability to the outer areas of fruit becomes limiting. Thus high temperatures and wind, widely fluctuating water availability, and drought stress promote blossom-end rot. Conversely, excessive soil moisture for prolonged periods can damage the root system and its ability to uptake calcium. Soil deficiency in calcium is rarely a direct cause of blossom-end rot in Oklahoma. However, excessive growth due to too much nitrogen fertility can also promote blossom-end rot. 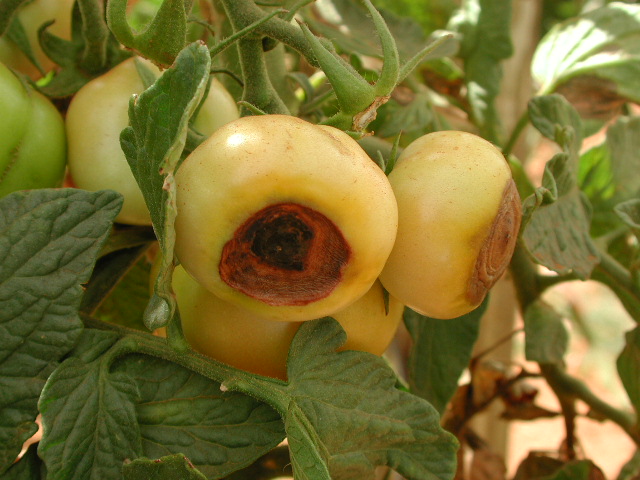 Control: Recommended soil fertility practices for tomato production in Oklahoma should be followed. Use of nitrate forms of nitrogen fertilizer, rather than ammonium forms which can interfere with calcium uptake, may reduce blossom-end rot. Highly susceptible tomato varieties such as Roma should be avoided. Maintain adequate and uniform levels of soil moisture though irrigation, particularly during periods of drought and high temperatures. Drip irrigation along with the use of plastic or organic mulches facilitates the maintenance of a uniform and non-fluctuating soil moisture profile. In the unlikely event that a soil test report indicates a calcium deficiency, applications of agricultural lime or gypsum should be made prior to transplanting. Foliar sprays with soluble forms of calcium are of little value because of poor absorption and movement to fruit where it is needed.

Catface is a term describing misshapen fruit with scars on the blossom end (Figure 2). Affected fruit are often kidney-shaped, but can also be distorted into other shapes. Bands of brown scar tissue may form between swollen areas of the fruit. Cavities or indentations extend deep into the fruit. Affected fruit ripen unevenly and market quality is reduced. Catface occurs most often on the first-formed fruits. Tomato varieties with very large fruit are most susceptible.

Catface is the result of abnormal development of the pistil of the flower, which eventually forms the fruit. Cold temperatures (below 58 F) during flower development and bloom and exposure to hormone-type, phenoxy herbicides such as 2,4-D are known to cause catface.

Control: Little can be done to control catface other than avoiding highly susceptible, large-fruited varieties and keeping phenoxy herbicide away from tomatoes. 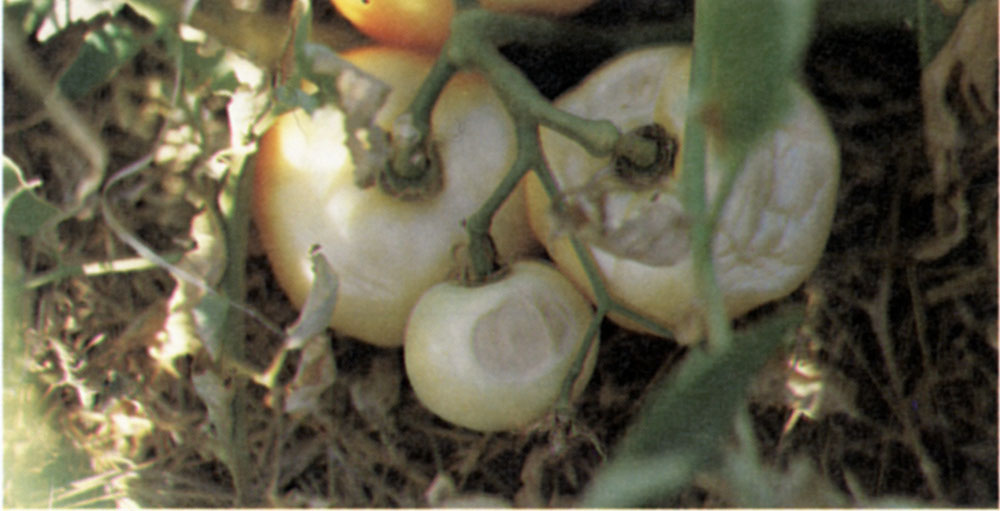 Control: Maintaining healthy foliage is important in protecting developing fruit from sunscald. Controlling foliar fungal and bacterial diseases, as well as spider mite damage is essential in preventing premature defoliation. Caged tomatoes suffer less sunscald than staked tomatoes or those allowed to grow on the ground. Artificial shading may be beneficial where fruit exposure to direct sunlight is expected.

Tomatoes are very sensitive to damage from herbicides. A common herbicide injury problem in tomatoes is caused by phenoxy herbicides such as 2,4-D and dicamba. These are hormone-type herbicides that are common components of products used to control broadleaf weeds in lawns and pastures, and are prone to drift or move with water to non-target sites.

Symptoms of phenoxy herbicide injury appear primarily as a distortion of new growth that occurs following exposure to the herbicide. Young leaves do not fully expand, are narrow and pointed, and tend to curl downward (Figure 4). Stems are twisted, may split, and become brittle. Fruit are catfaced or irregularly shaped. Symptoms of phenoxy herbicide resemble some virus diseases. However, herbicide injury often results in more uniform damage to plants than virus diseases which tend to be aggregated in their distribution. 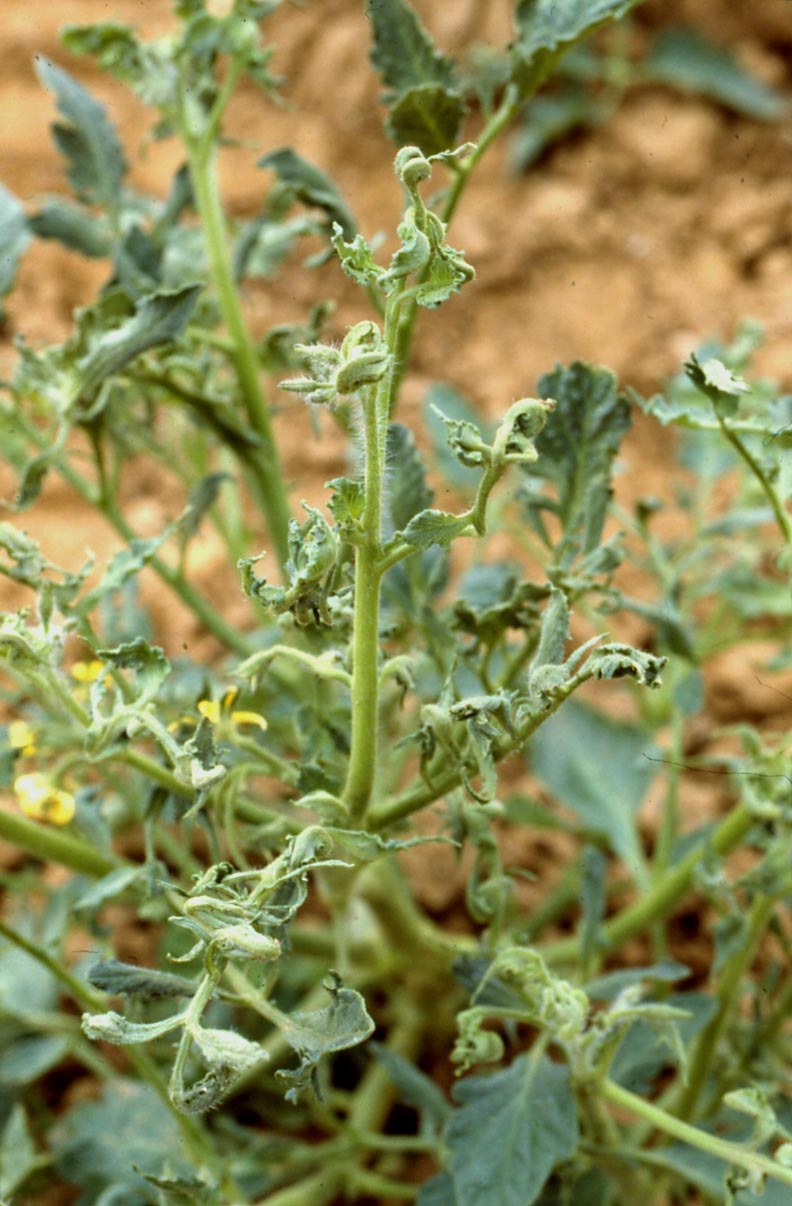 Control: Avoid using these herbicides in areas where tomatoes and other sensitive vegetable crops are being grown. Plants exposed to small amounts of phenoxy herbicides will outgrow symptoms, but harvest may be delayed. Severely damaged plants will not recover.

Physiological leaf roll begins with an upward curing of older leaflets. Leaf roll may progress until the margins of the rolled leaflets touch or even overlap. Rolled leaves are firm and leathery and most of the foliage may be affected (Figure 5). Aside from the leaf rolling, plants are otherwise normal in size and appearance, unlike virus diseases such as curly top which also cause leaf rolling. Affected plants will continue to grow normally with little or no reduction in yield or quality.

Physiological leaf roll has been associated with tomato varieties having a specific gene that favors this condition, the occurrence of high temperatures, and prolonged periods of wet soil. Leaf roll is often more severe on plants that are staked and pruned. 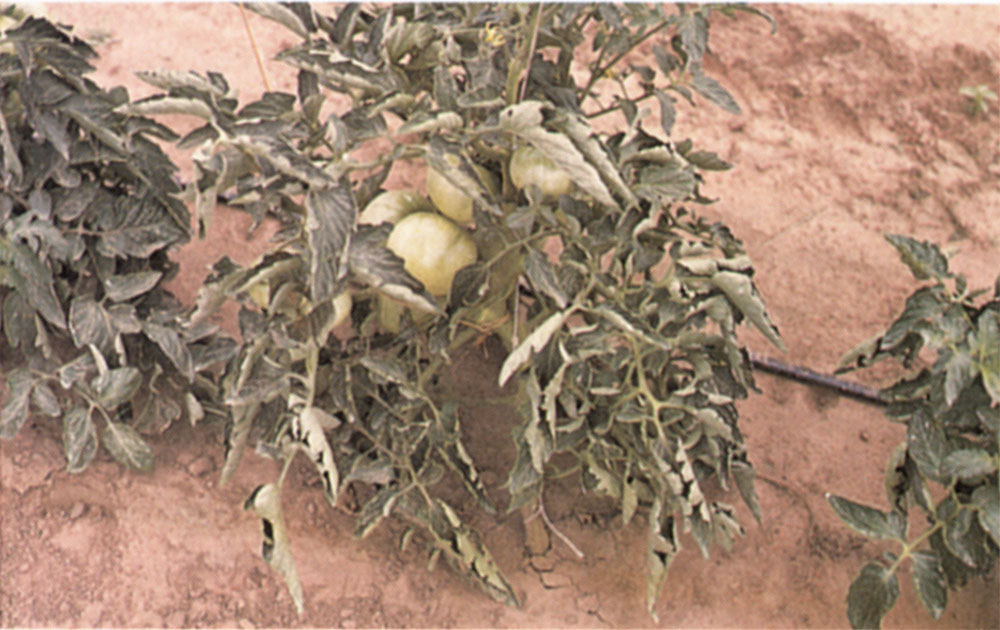 Control: Aside from planting tomatoes on well-drained soils, there is little that can be done to correct leaf roll.

Yellow shoulder, also referred to as heat ripening or persistent green shoulder, is a ripening disorder of tomato fruit. The shoulders of affected fruit remain green or eventually turn yellow, but not red. The entire shoulder or an irregular patch may be affected. Internal areas of the upper fruit remain hard and white.

The cause of yellow shoulder is not fully understood. Apparently fruit exposed to high temperatures during fruit maturation and ripening express this disease. Tomato varieties vary in susceptibility to yellow shoulder, with those having dark green shoulders being more susceptible than uniform ripening varieties.

Control: The best control is achieved through the use of varieties with resistance to yellow shoulder. During periods of high temperatures, a lower incidence of yellow shoulder can be expected when fruit are picked at the breaker stage (first pink color) and are allowed to ripen at room temperature.