Cedar-apple rust and similar rusts are incited by several species of the fungal genus Gymnosporangium. Cedar-apple rust affects the health and vigor of apple trees since it causes premature defoliation and reduces fruit quality. If severe infections occur for several seasons, the result may be tree death.

On the native Eastern red cedar and ornamental cedar, Juniperus spp., cedar-apple rust is not known to be extremely harmful. However, some ornamental cedar plants are covered with fungal galls and become unattractive. Under some backyard conditions where both hosts (cedar and apple) are located close together, both trees have been killed by this disease.

On apple, the disease first appears on the leaves as small greenish yellow spots which gradually enlarge, changing to orange-yellow and becoming surrounded at the border by concentric red bands (Figure 1). On the upper leaf surface, the spots become stippled with black specialized fruiting structures (spermogonia) (Figure 2). On the underside of the leaf, lesions are formed called “aecia.” At the point where an aecium is formed, hairlike projections can be observed (Figure 3). The leaf thickens around these projections, causing the aecium to have a cuplike appearance. These cuplike lesions can also appear on immature fruit of apples, causing dwarfing and malformation. 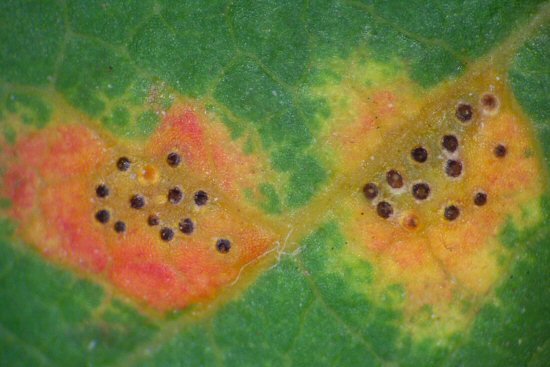 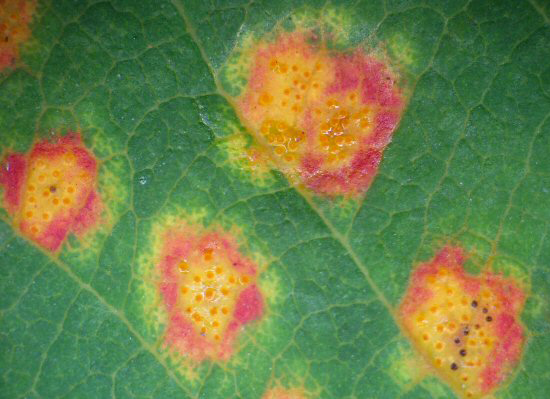 Figure 2. Close view of spermagonia with developing spermatia on upper surface of an apple leaf with cedar-apple rust disease. 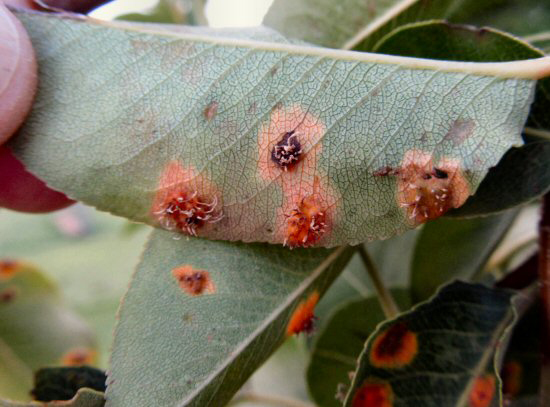 Figure 3. Aecial projections on the underside of an apple leaf with cedar-apple rust disease.

Cedar needles are infected during summer months, and by June the following summer, small greenish brown swellings appear on the upper or inner foliage surface. These swellings enlarge and by autumn appear as chocolate-brown, somewhat kidney-shaped galls. Each gall is covered with small circular depressions (Figure 4A). The somewhat kidney-shaped galls vary from one-sixteenth of an inch to over two inches across. The next spring, in moist weather, the pocketlike depressions in the galls put forth orange telial horns (Figure 4B-D). These telial horns are a gelatinous material that swells immensely. A gall covered with telial horns may reach the size of a baseball (Figure 5). 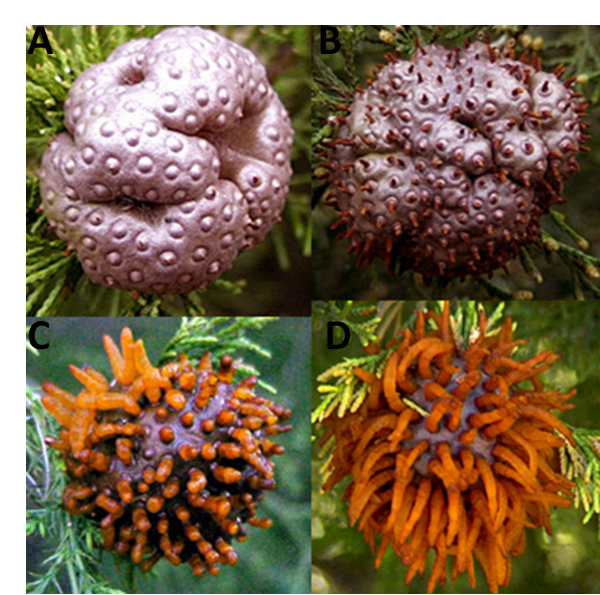 Figure 4. Young galls on the cedar bear circular depressions (A). The next spring, the galls absorb moisture and the orange telial horns enlarge (B-D). 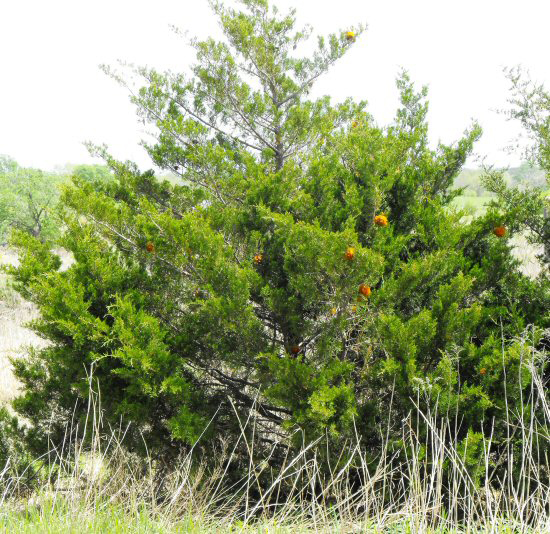 The disease cycle of cedar-apple rust is one of the most complex of any plant diseases, and the fungus (Gymnosporangium juniperi-virginianae) that causes cedar-apple rust spends almost two years of its life cycle on the cedar trees. Cedar needles are infected between June and September by spores blown from lesions of apple leaves. The spores that infect the cedar needles are called “aeciospores.” Small greenish brown galls appear during the following summer, but they do not mature until the following spring, when they may reach a size of two inches in diameter. These large galls are sometimes called “cedar apples.” After a few warm spring rains, about the time apple blossoms are in the pink stage, the galls extrude gelatinous tendrils from the circular or pocketlike depressions on all sides of the galls. These tendrils are long, thin, bright orange, and form a mass several times the size of the original brown galls. The tendrils, or horns, consist of many two-celled microscopic spores called “teliospores,” which germinate on the tendrils by producing four spores called “basidiospores.” Four basidiospores can be produced from each cell of the two-celled teliospores. All teliospores do not germinate at the same time. When the supply of teliospores is exhausted, the galls dry up and may drop. If the twigs bearing the galls are killed, the dead galls often remain hanging on the cedar trees through the next year.

After the microscopic basidiospores are produced, they are discharged in the air and the wind can carry them up to two or three miles. Some of these spores will eventually settle on apple leaves or fruit. If a film of moisture is present and the temperature is between 56 F and 61 F, the basidiospores will germinate quickly and penetrate the host leaf tissue in one to three hours. Very little spore germination occurs at temperatures below 47 F or above 85 F. Fruit lesions are usually near the blossom end.

After infection, yellow rust spots appear on the upper surface of the apple leaves in one to three weeks, depending on the temperature and susceptibility of the variety. As these spots increase in size and become stippled with black pimple-like bodies called “spermogonia,” a sticky exudate containing spermatia appear. This exudate attracts insects. Insects will carry spermatia from one rust spot to another, causing the fungus to be fertilized. When fertilization occurs, the fungus grows through the leaf and produces reproductive bodies called aecia on the lower surface of the leaf. These aecia produce the aeciospores that infect the cedar needles. Fruit of susceptible apple varieties also may be infected and aeciospores may be produced. From June through August, these aeciospores mature and are released. The aeciospores are carried by the wind and those that land on cedar leaves may germinate and start the formation of galls. The entire life cycle of the causal fungus for cedar-apple rust takes two years –18 to 20 months on cedar and four to six months on apple.

Control is most readily accomplished by removing either host from the vicinity of the other. The prevailing winds will affect the distance the hosts need to be kept apart to prevent disease development. In Oklahoma, cedar trees to the north or northwest of apple trees will need to be no more than one-fourth of a mile away to prevent an appreciable amount of rust spores from reaching either host. However, if the cedar trees are located to the south or southwest of apple trees, the distance would need to be one mile or more.

In a backyard situation, it is possible in late winter to remove all cedar-apple rust galls by pruning them out of the cedar trees. To break the disease cycle, galls have to be removed before telial horns are formed. No benefit will be received from this method if your neighbor’s tree has cedar-apple rust galls.

Apple trees can be protected from cedar-apple rust by following a fungicide spray schedule starting at blossom time and continuing at seven-day intervals until the cedar galls have stopped spreading spores. Control on cedars can be obtained with a fungicide spray schedule from June through September at two-week intervals. For suggested fungicides and rates, refer to the current publication  E-832 OSU Extension Agents’ Handbook of Insect, Plant Disease, and Weed Control.

Some of the more susceptible crabapple varieties that should be avoided are Almey, Bachtel, Hopa, Pink Perfection, Snowcloud, and Strathmore.

Other rusts similar to cedar-apple rust will infect hawthorne, quince, pear, and serviceberry. Cedar-quince rust or quince rust has the broadest host range and infects quince, apple, pear, hawthorn and related plants. Quince rust causes systemic cankers to form on cedar trees. These cankers are perennial and will remain active year after year unless the twig or branch dies. The quince rust fungus will infect twigs, branches, and even the main trunk of cedar trees to form the elongated, swollen perennial cankers. In the spring, teliospores begin forming in these cankers. Jelly-like masses of yellowish orange teliospores ooze out of the cankers along the limbs during spring rains about the time the alternate hosts including apple trees, are in bloom (Figure 6). 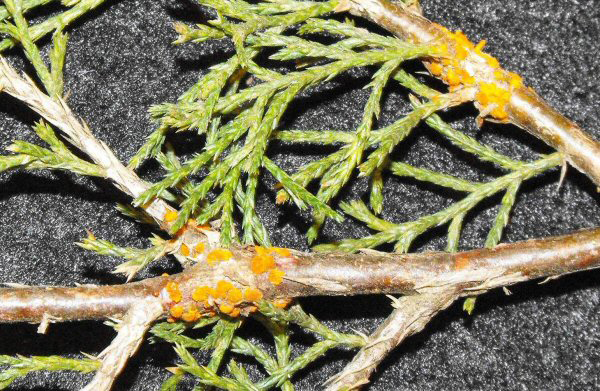 Spores from the quince rust fungus blow from cedars to the other hosts. The most readily recognized symptom of quince rust on apples is distortion of fruit. Usually, diseased fruit become puckered at the blossom end when they are about an inch in diameter. Surface lesions on the fruit are dark green in color. As the fruit enlarges, the blossom end of the apple remains constricted. Many apples infected by quince rust drop in June. The effects of quince rust can sometimes be observed on the leaves. With quince rust, few if any aecia are produced on most apple varieties; however, the fungus sporulates abundantly on quince and hawthorn.

Several apple varieties are moderately resistant to quince rust, including Jonathan, Rome, Ben Davis, and Wealthy. Unfortunately, the Red Delicious variety is quite susceptible. As is the case with cedar-apple rust, control can be accomplished by removing either host from the vicinity of the other. Apply fungicides as suggested for cedar-apple rust.

Some of the more susceptible ornamental juniper varieties to quince rust are Andorra, Welchi, and Wichita Blue.