For those who work in production agriculture, there are inherent physical risks prevalent on a daily basis. In fact, agricultural occupations are consistently ranked as some of the most dangerous in industry. This is not surprising, as most farmers and ranchers consider the physical difficulties of their daily tasks as “just part of the job.” A quick review of literature shows that one of the least investigated areas in agricultural safety relates to beef cattle handling. A 1997 study conducted by the Biosystems and Agricultural Engineering Department at Oklahoma State University described conditions associated with 150 cattle handling injury cases on 100 Oklahoma cow-calf operations. The study showed that more than 50 percent of injuries in these situations were due to human error, while equipment and facilities accounted for about 25 percent  of the perceived causes. In most cases, a better understanding of how an animal may respond to human interaction and to its immediate surroundings will help keep the worker from becoming an injury victim.

Human error is the primary cause of many types of accidents. These errors in judgment and action are due to a variety of reasons, but occur most when people are tired, hurried, upset, preoccupied, or careless. Remember that human physical, psychological, and physiological factors greatly affect the occurrence of life threatening accidents. Using this information in combination with proper cattle handling techniques can reduce the risk of injury.

An animal’s senses function like those of a human; however, most animals detect and perceive their environments very differently as compared to the way humans detect and perceive the same surroundings. While cattle have poor color recognition and poor depth perception, their hearing is extremely sensitive relative to humans. Knowing these characteristics, one can better understand why cattle are often skittish or balky in unfamiliar surroundings.

Cattle have panoramic vision, meaning they can see in all directions, except directly behind, without moving their head. Additionally, cattle have poor depth perception, especially when they are moving with their heads up. In order to see depth, they have to stop and put their heads down. For this reason, unfamiliar objects and shadows on the ground are the primary reasons for cattle balking and delaying the animals behind them. This is why it is important for handling and working facilities be constructed to minimize shadows.

Cattle have a tendency to move toward the light. If working cattle at night, use frosted lamps that do not glare in the animal’s faces. Position these lights in the area where moving cattle, such as a trailer or barn.

The size of an animal’s flight zone depends on its fearful or docile behavior, the angle of handler’s approach, and its state of excitement. Work at the edge of the of flight zone at a 45 to 60 degree angle behind the animal’s shoulder (Figure 1). Cattle will circle away. The flight zone radius can range from five to over 25 feet for feedlot cattle and as far as 300 feet for range cattle. If one is within their flight zone, the animal moves away or retreats.

When moving cattle, avoid approaching them directly. Try to work them close to the point of balance, moving back and forth on a line parallel to the direction the animal is traveling. 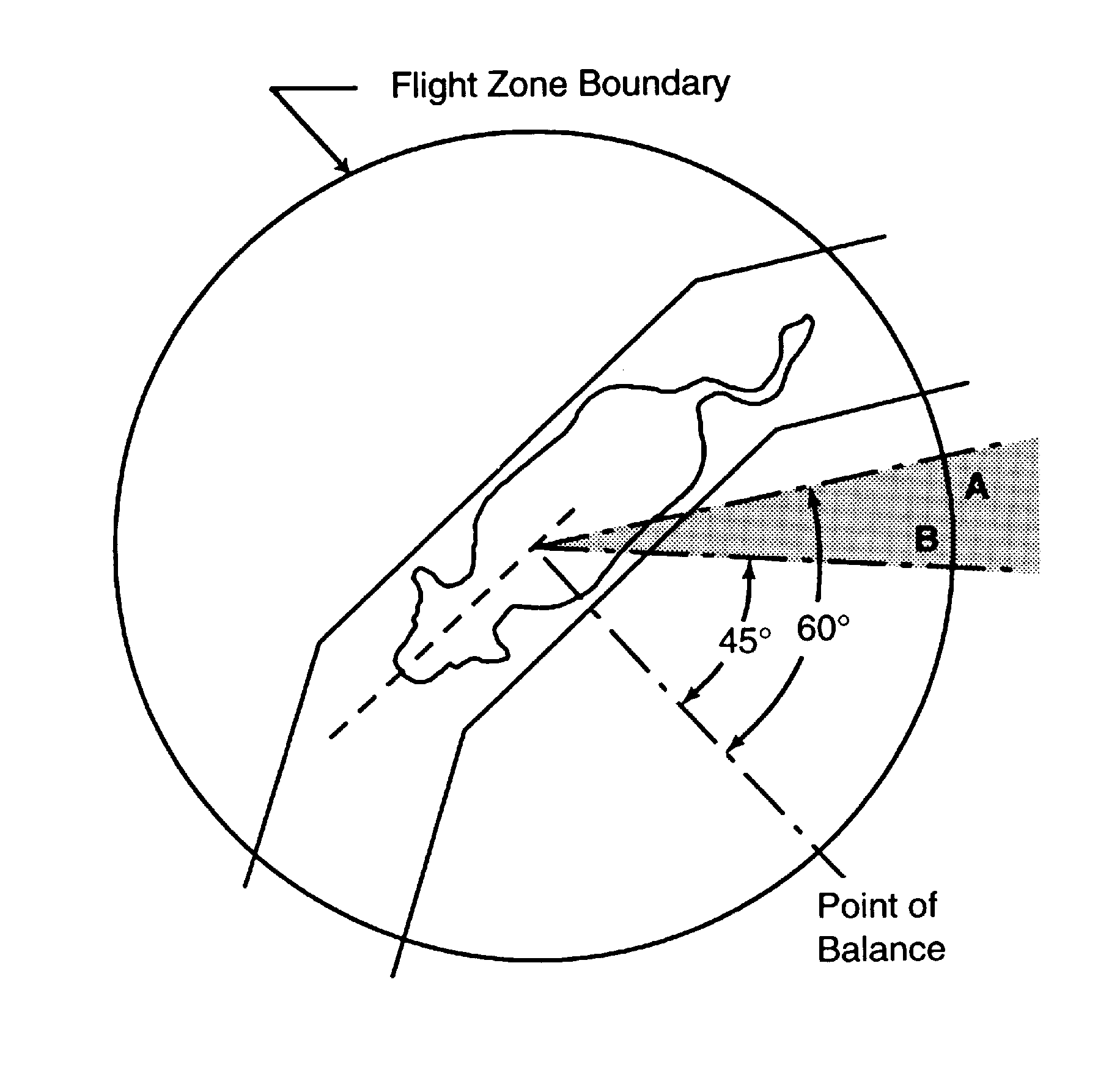 Figure 1. Cattle flight zone.
Note: Animal movement stops if handler is in position “A.” Handler moves to position “B” to start movement.

In addition to the flight zone, an understanding of the “herd instinct” is important. Cattle follow the leader and are motivated to follow each other. Each animal should be able to see others ahead of it. Make single file chutes at least 20 feet long, or 30 to 50 feet for larger facilities. Don’t force an animal in a single file chute unless it has a place to go. If the cow balks, it will continue balking.

In crowding pens, consider handling cattle in small groups up to ten head. The cattle need room to turn. Use their instinctive following behavior to fill the chute. Wait until the single file chute is almost empty before refilling. A crowding gate is used to follow the cattle, not to shove against them. If a lone animal refuses to move, release it and bring it back with another group. An animal left alone in a crowding pen may become agitated and attempt to jump the fence to rejoin the herd.

Corral and working facilities are constructed to confine cattle safely and efficiently for close observation and to perform routine health and management procedures. Good cattle handling systems make working livestock easier with limited manpower. The operation of any cattle facility depends on cattle behavior, corral design, and the skill and technique of the handler.

Keep the design of sorting facilities and alleyways simple. They should provide adequate catch pen space to accommodate cattle being moved to and from holding areas. Several pens are usually preferred over one large holding pen. More pens allow larger groups to be sorted into smaller, more manageable sized groups. For most small operations, a single alley is used for sorting, as well as moving cattle to and from the working area. Depending on the number of holding pens, an additional return alley may be beneficial. This return alley allows for a continuous flow of cattle from holding to working areas and back to their original pen.

Alley width should be 12 to 14 feet with a 10-foot minimum. Wider alleys can make it easier for cattle to escape. Pens that are too narrow fail to give the animals room enough to maneuver. The double-gate system allows the movement of cattle out of holding pens and into the sorting alley with cattle headed in the desired direction (Figure 2). This greatly reduces sorting time and prevents animal backwash. 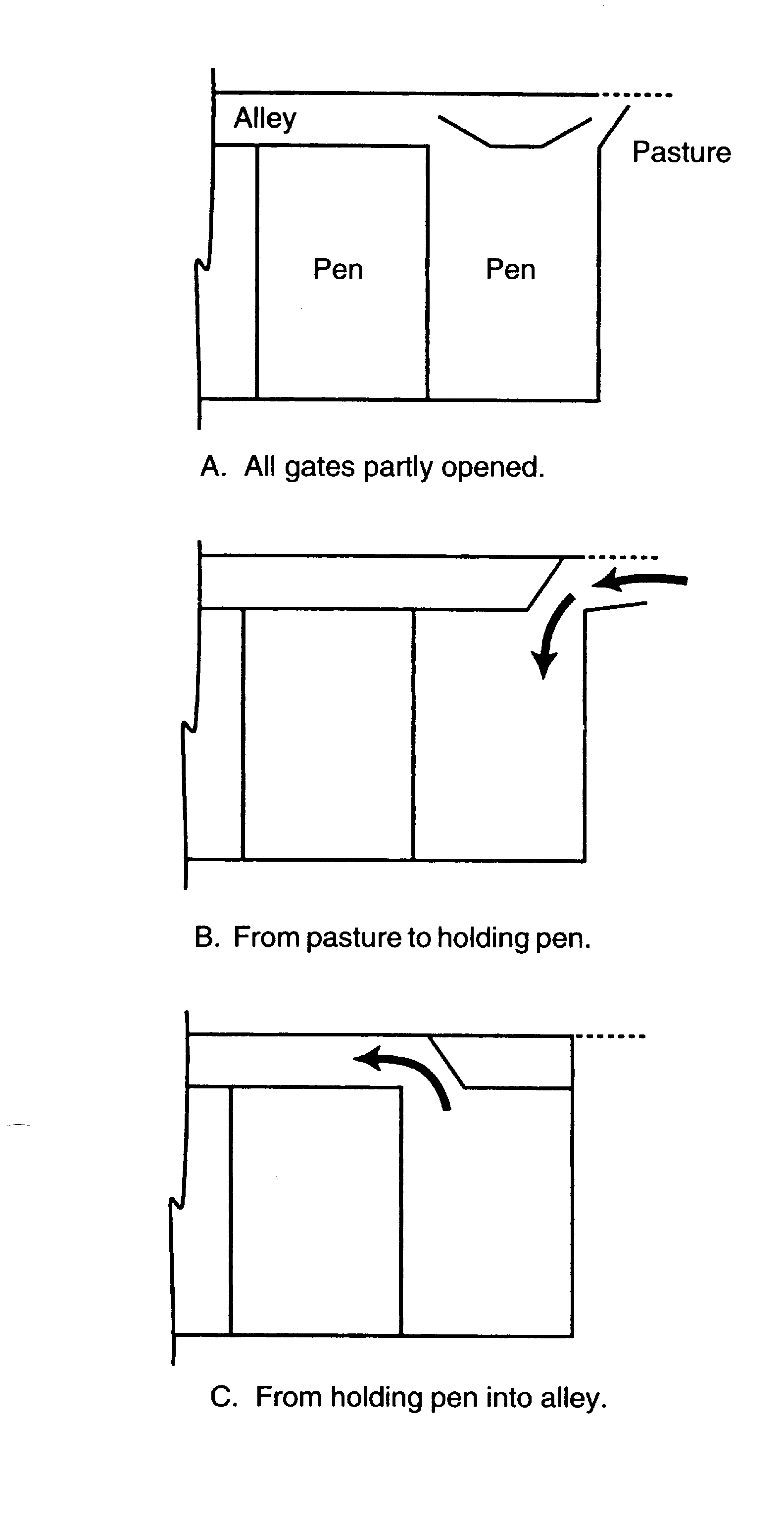 The crowding area should be designed and located so cattle can be easily moved into this area from a common sorting alley that is fed by adjacent holding pens. A circular crowding area with totally enclosed sides and crowding gate is effective because the only escape route visible to the cattle is through the working or loading chute exits. This facilitates animal flow and worker safety. For safest results in cattle movement and ease of cleaning, use a roughened, broom finish concrete floor to provide an all-weather surface.

The crowding gate should also be solid and designed to prevent animals from reversing the gate’s direction. Do not overload the crowding area. Too many animals make the process more difficult on the handlers, as animals can block the chute entrance. Do not enter a crowding area with animals if they become bunched. Release pressure from the gate to allow for some movement to free the bottleneck.

A catwalk around the outside of the crowding pen allows workers to maneuver animals toward the chute while avoiding direct animal contact. Position the catwalk about 36 inches below the top of the fence.

The working chute should also be curved with totally enclosed sides. Cattle move more freely because they cannot view the handlers or squeeze chute until they approach the palpation cage or rear gate of the squeeze chute.

Sloped sides in the working chute restrict the animal’s feet and legs to a narrow path, which in turn reduces balking and helps prevent an animal from turning around. Sloping sides work well in most cow-calf operations because different sizes of cattle can be worked efficiently in the same chute. Recommended width for the bottom of the chute is 16 inches, while the top should be about 28 inches (see Table 1). For large-framed cattle, the top width dimension for cattle over 1200 pounds should be increased two inches. To accommodate large-framed bulls, it may be necessary to increase the top width by four inches or more.

Overhead restrainers prevent cattle from rearing up, turning around, or falling over backward in the chute. Restrainers are generally located 60 inches above the floor of the chute. Some restrainers can be adjusted to accommodate different cattle heights. Restrainers are more effective if adjusted to keep an animal’s head down. Emergency release panels are highly recommended with or without the use of overhead restrainers. Release panels can be constructed as movable crowding chute side panels that can be opened to release animals that have fallen in the chute and become lodged.

Solid side panels on working chutes hamper the use of the traditional scotch pole to prevent cattle from backing up. With solid-sided chutes, backstops are normally suspended or mounted from above. All backstops work on the same principle. The metal tee-pipe is hinged so that it releases in the direction of the flow toward the squeeze chute, but will not hinge back beyond vertical in reverse. Most pipe backstops are telescoped so that they can be adjusted up or down to accommodate cattle of different heights. Backstops should be adjusted to block an animal six to eight inches below the top of the tailhead. Backstops are normally held in a vertical position using chains or rubber bumpers. Bumpers have the advantage of holding down the noise when the stop falls back into position. A noisy stop can cause cattle to balk.

Inserting pipes through the sides to the working chute to prevent animals from backing up can be hazardous to workers. If backstops are not installed and pipes must be used, be sure the pipe is between the cattle and worker. If not, a worker can be caught between the pipe and the chute or fence if the person is not properly positioned and the animal backs up before the pipe is extended through the chute. Also, avoid standing on the fence or rails or extending arms and hands between or over fencing.

A squeeze chute is necessary for restraining cattle. Make sure workers are familiar with possible pinch points on the chute. It is important to be aware of the positioning of handles that open and close the headgate, sides, and tailgate. These are commonly described as “head-knockers” and “jawbreakers.” Also, inspect the rope in rope-and-pulley devices and replace it if there are any signs of fraying. Finally, avoid contact with animals if they are not properly restrained. If an animal is not properly caught and restrained by the squeeze chute, release the animal and bring it through the chute again.

The proper design, construction and operation of a cattle handling facility is important to ensure safe working conditions for animals and humans. Understanding the inherent behavior of cattle, plus working them slowly and quietly, will reduce injuries and help make an operation run more smoothly and efficiently.

A more in-depth discussion on the design and construction of cattle handling facilities is available in “Modern Corral Design.” For a copy of this publication, stop by the local county Cooperative Extension office. If ordering, send $12.00 for each copy ($10.00 for the book plus $2.00 for postage and handling) payable to PBIS (Plans and Building Information Service) at the following address:

Funding for this publication provided by the Southwest Center for Agricultural Health, Injury Prevention, and Education, The University of Texas Health Center at Tyler.