Canola is fed upon by many insect and arthropod pests, including several species of caterpillars, the immature stage of moths and butterflies. The most potentially damaging caterpillars likely to be found in canola are the army cutworm, corn earworm, diamondback moth and the variegated cutworm. For current recommendations on control of caterpillars in canola, consult CR-7667, Management of Insect and Mite Pests in Canola, which can be obtained online at OSU Fact Sheets.

Description and Life History: Army cutworm moths have a wingspan of 1.5 inches to 1.75 inches. The forewings are dark gray-brown with multiple distinct markings (Figure 1). Larvae are pale greenish gray to brown with a pale gray stripe on its back, and will grow to 1.5 inches to 2 inches.  When disturbed, they exhibit the typical behavior of curling into a tight “C” shape (Figure 2).

Moths migrate to Oklahoma each fall from the Rocky Mountains, where they are found during summer. They seek bare or sparsely vegetated fields (like a newly prepared field ready for canola planting, or a field that was “dusted in” and the seedlings had not yet emerged). The eggs hatch soon after being deposited. Egg-laying activity occurs from August through October, which explains why a producer might see different sizes of larvae in a field. Army cutworms intermittently feed when temperatures warm at any time during winter, and feed continuously as soil temperatures warm in spring. Most larvae pupate in the soil by mid- to late March and moths (also called “millers”) begin emerging in April and fly north to the Rocky Mountains for the summer. 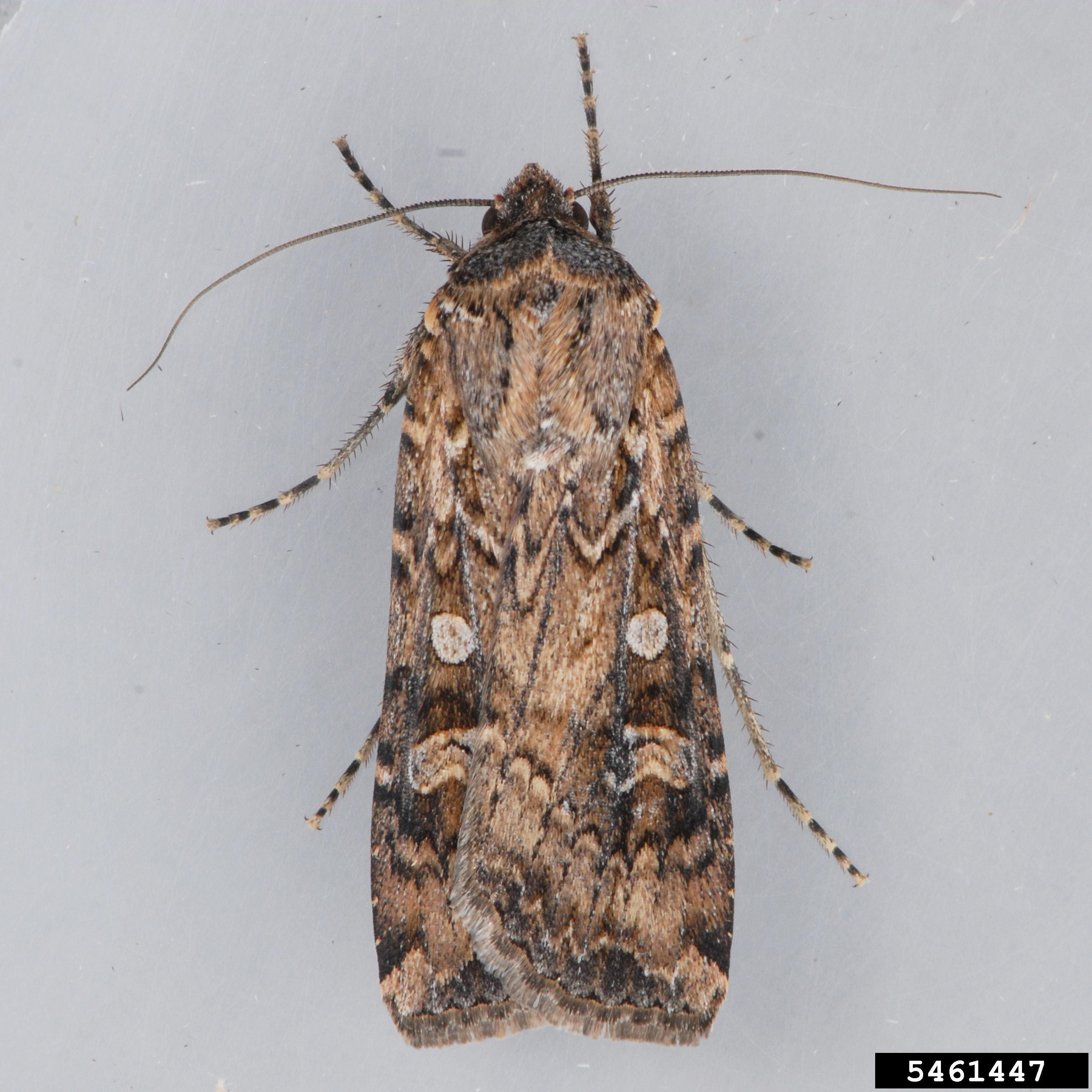 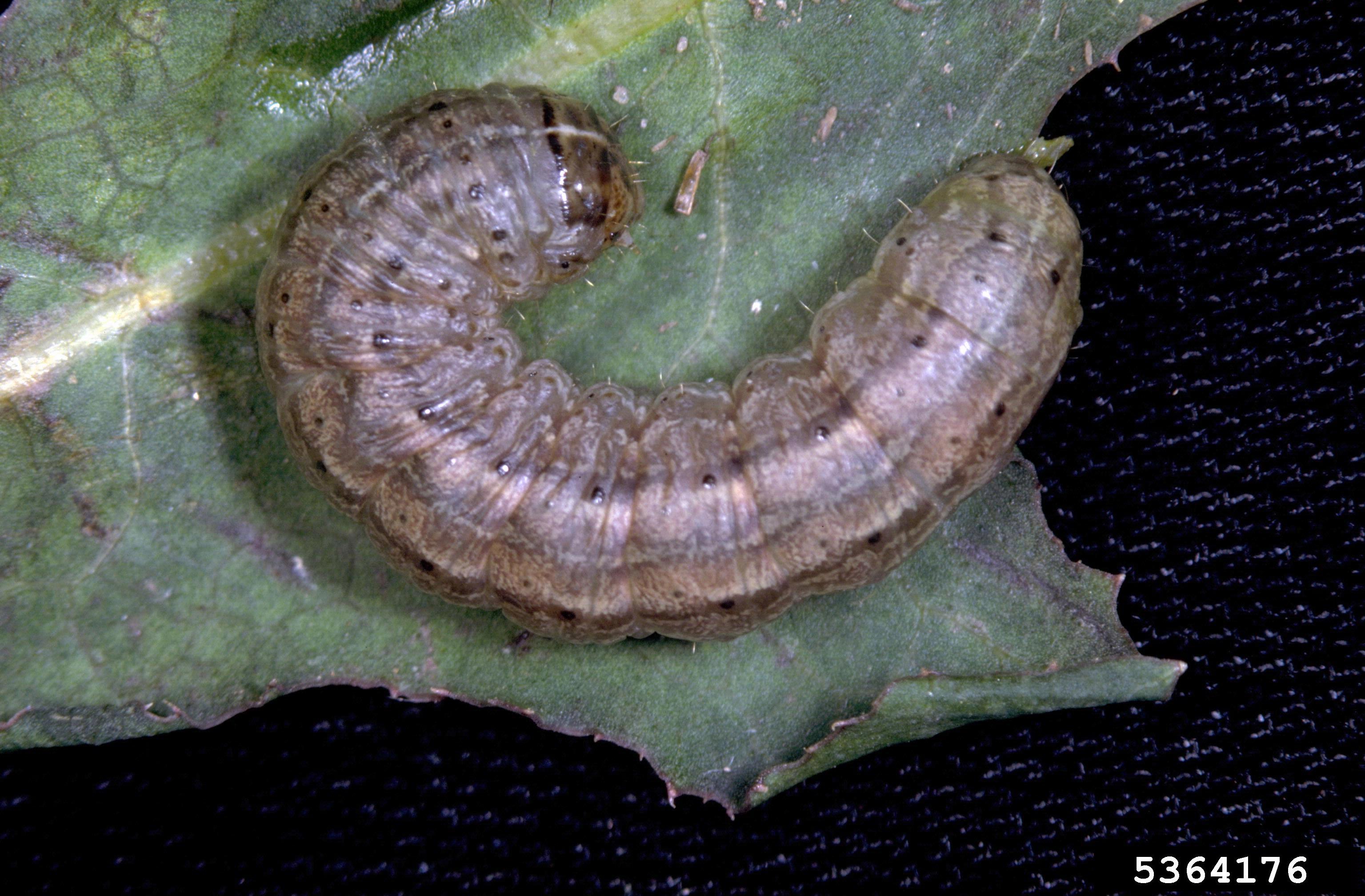 Damage: High populations of army cutworms are not common, but can cause severe stand loss in canola if not controlled. Army cutworms get their name because they feed at the base of plants, separating the top of the plant from its roots at the crown base (Figure 3). They can cause direct stand loss or cause plants to be stunted and malformed because they are only partially attached to their roots. 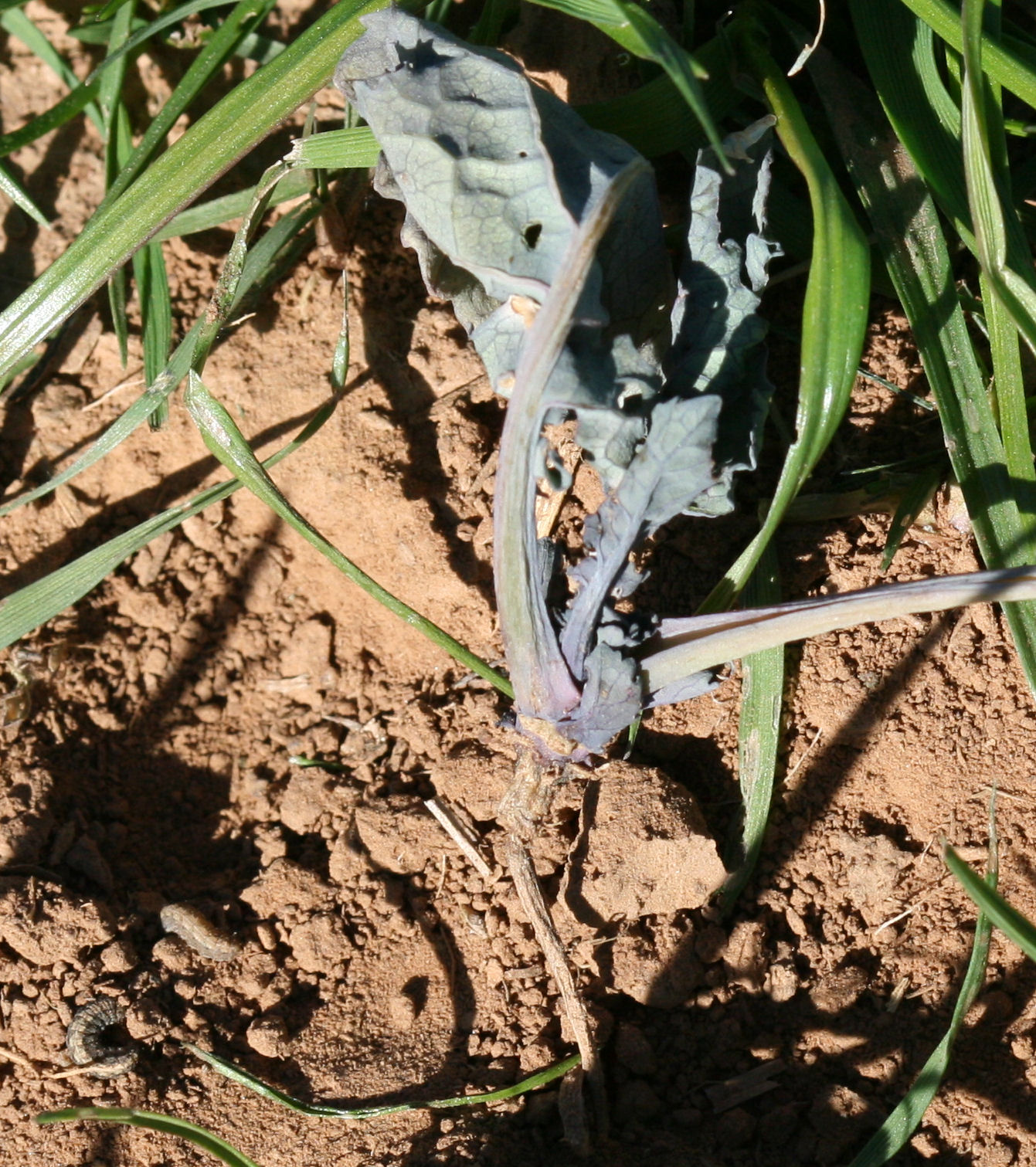 Scouting and Management: Army cutworm damage often goes unnoticed through the winter because the caterpillars hide during the day, grow slowly and don’t cause noticeable damage until temperatures warm in the spring. While it might be tempting to apply a preventive insecticide, guarantee a positive economical return is unlikely. Army cutworm infestations are very sporadic, so it is impossible to time the insecticide correctly. An infestation ultimately depends on the attractiveness of the field during a moth migration. Sampling for army cutworms is a simple and reliable process if done in a timely manner. Because they hide below the soil surface during the day, they must be physically disturbed from beneath the soil to assess numbers. Sample a field by stirring or digging the soil to a depth of 2 inches at five or more locations.

An average of one to two cutworms per row-foot.

Description and Life History: Corn earworm is found worldwide and it feeds on many crops. The adult is a light yellow-olive moth with a dark spot near the center of each forewing, and measures 1 inch to 1.5 inches (Figure 4). Larval body color ranges from shades of pink, yellow, green and brown to black. Mature larvae measure 1.5 inches (Figure 5). Earworms overwinter as pupae in the soil, and emerge as adults in spring. Moths from farther south will also migrate northward from Texas. 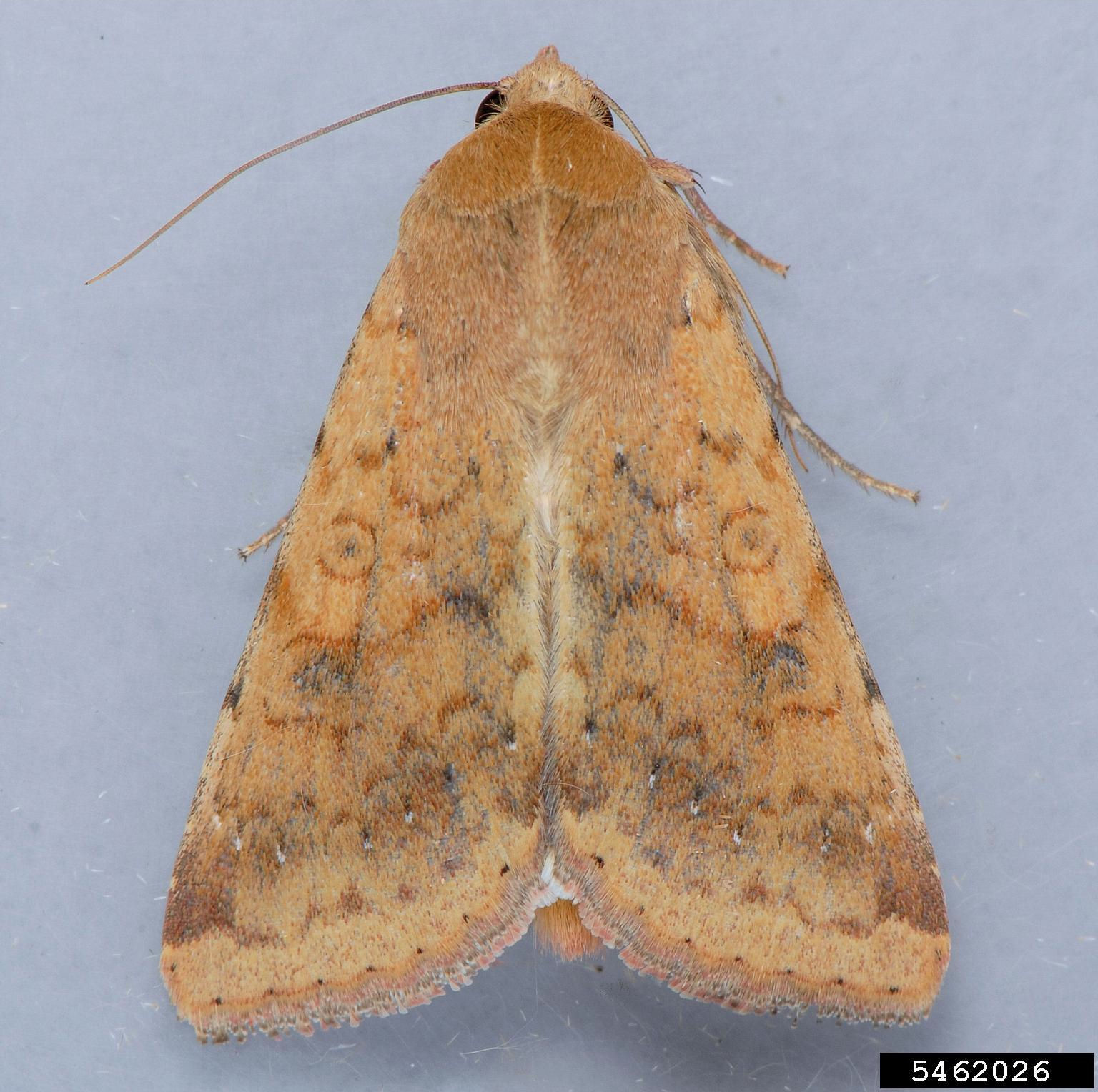 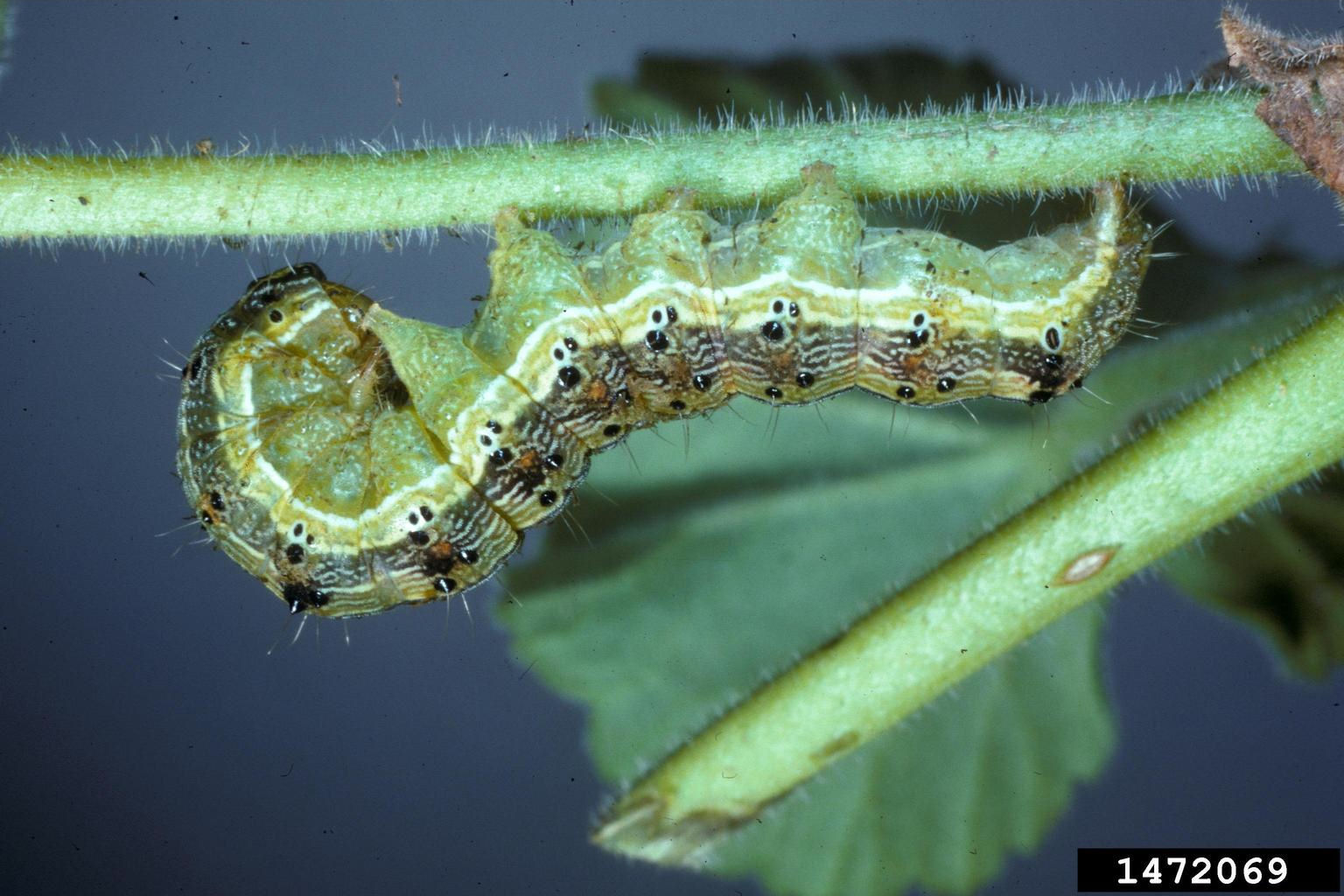 Damage: Larvae are the damaging stage. They feed on pods (Figure 6). 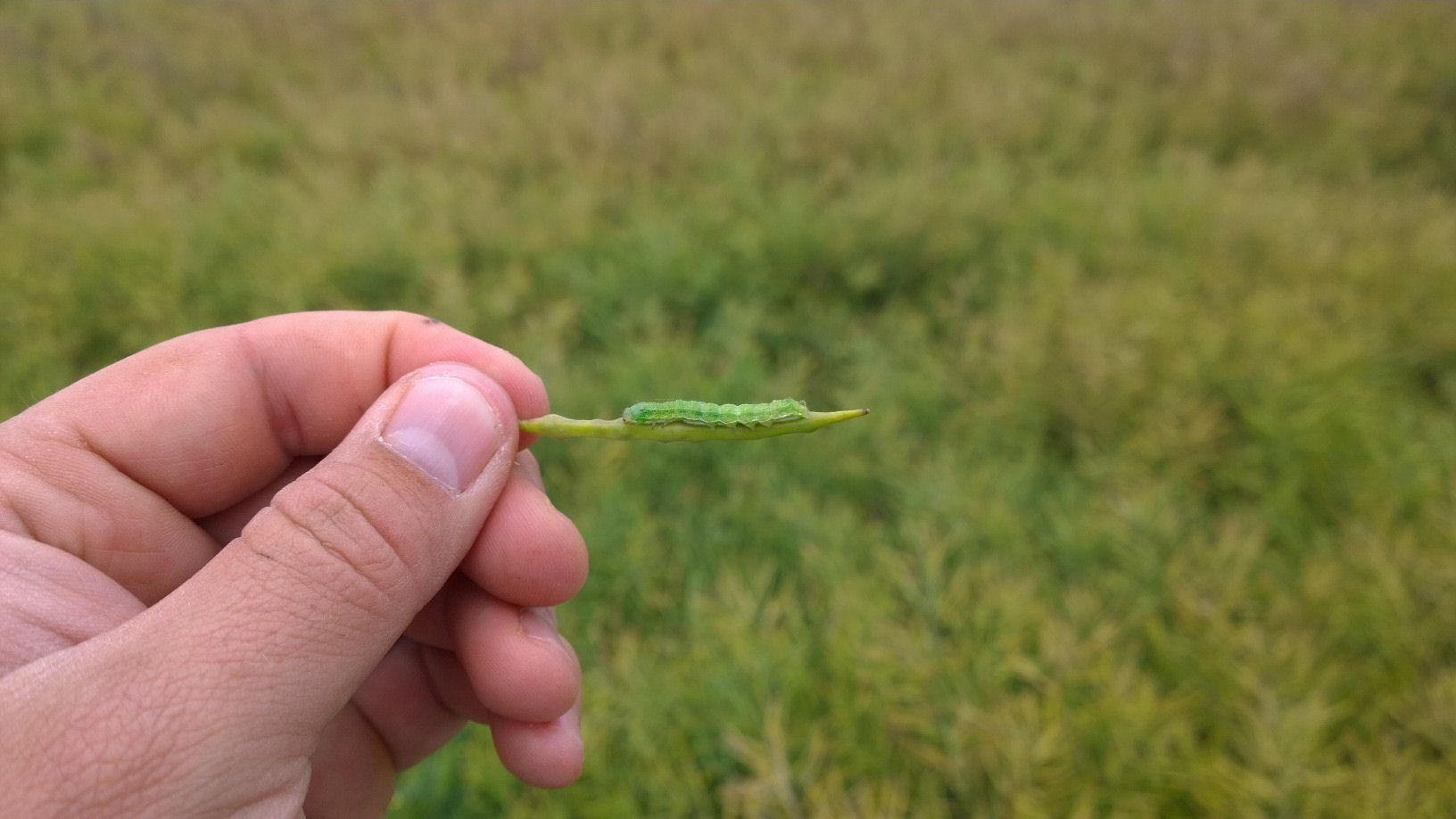 Scouting and Management: Look for damage signs (damaged pods) and caterpillars. Corn earworm infestations are rare, but when larvae are present, they often remain on the upper canopy of the canola. To sample, it may be better to disturb the canopy, so the larvae drop to the ground for easier counting.  It is very important to check the field before deciding to spray. Check several locations in the field to get an accurate assessment.

No research-based threshold has yet been established for the corn earworm; however, thresholds for the bertha armyworm in canola, which causes similar damage is two or more caterpillars per square foot.

Description and Life History: Diamondback moth is found worldwide and it feeds on many crops, but prefers plants in the family Brassicacea and Amaranthaceae. The adult moth is a small, gray and brown moth measuring 0.5 inch long. When resting, the wings are folded so they wrap around the body (Figure 7). When at rest, male moths have three diamond-shaped markings on the forewings. Female moths lay oval, flattened eggs measuring 1/6-inch in groups of one egg to eight eggs, which will hatch in five days to six days. One female can lay 150 eggs. 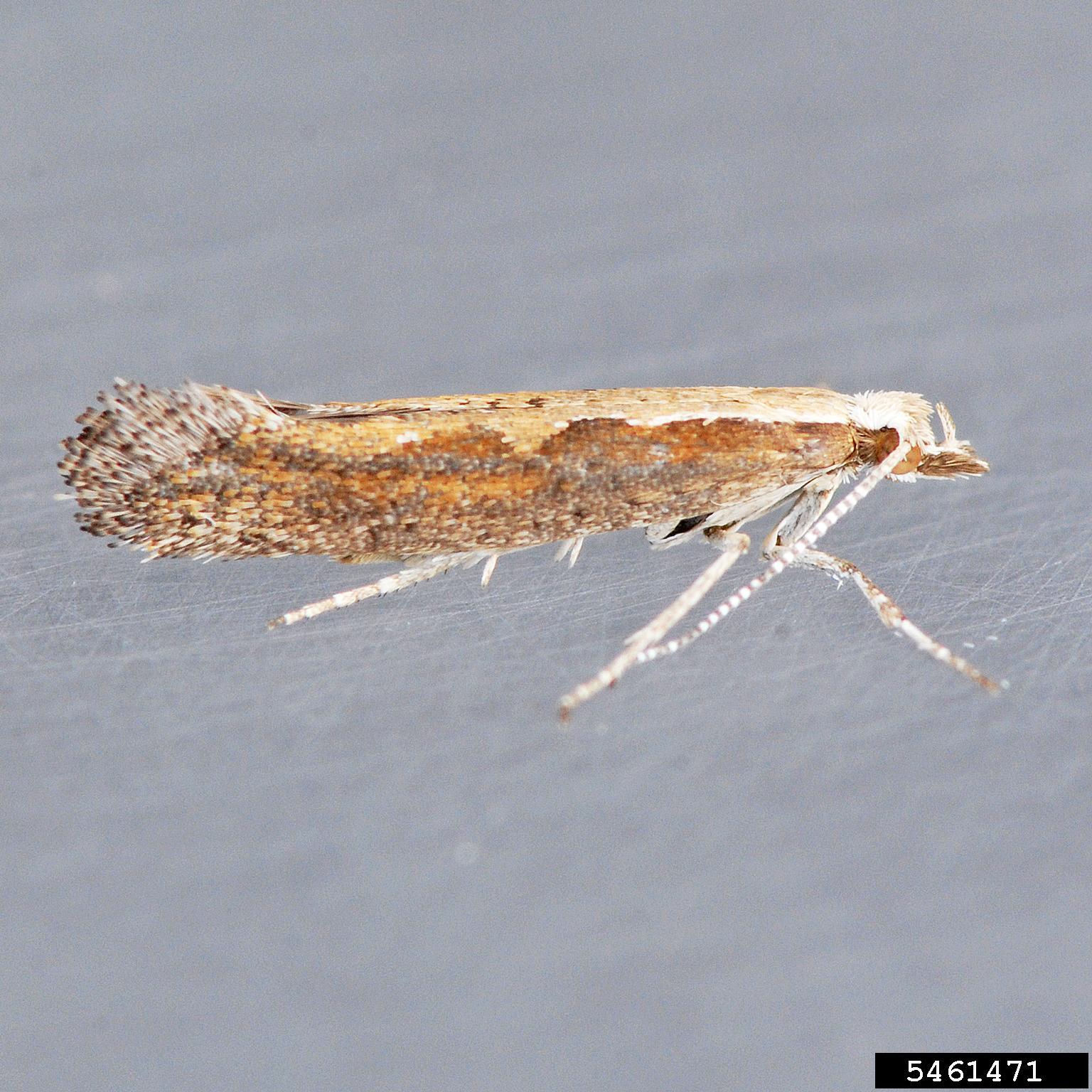 Newly hatched larvae are light green with a green head and become progressively darker green as they mature. They develop through four instars, and when fully grown, measure about ½-inch long (Figure 8). Caterpillars will thrash violently back and forth and drop from the plant on a silk strand when disturbed. They can complete a life cycle in about 32 days, depending on temperature and pupate in a loose, silken cocoon they attach to the plant. 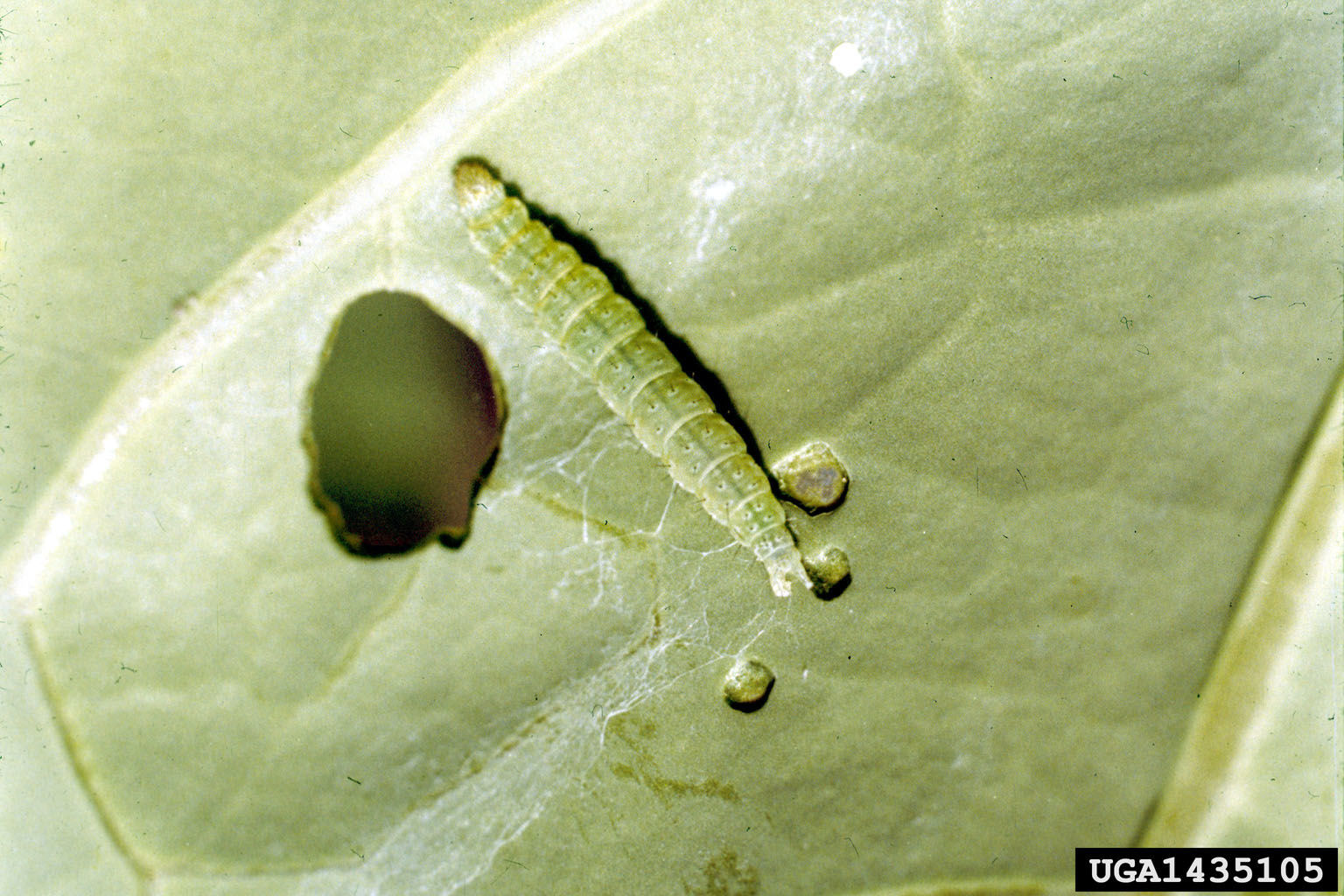 Damage: Larvae are the damaging stage. Newly hatched larvae “mine” plant tissue between the upper and lower leaf surface as they feed, forming small irregular “windowpaned” areas on a leaf (Figure 9). When they grow larger, they chew holes, and finally entire leaves, leaving only the veins. Yield loss in canola is more likely associated with damage to the crown, flowers and seed pods. Overwintering larvae remain in the crown and can damage shoot buds, causing distorted stems as the plants emerge during spring. Infestations of the crown can easily be mistaken for winterkill. When larvae feed on flowers, they cause them to abort. When they feed on seed pods, the pods may fail to produce seed. Feeding associated with flowers and pods can also cause a delay in plant maturity. 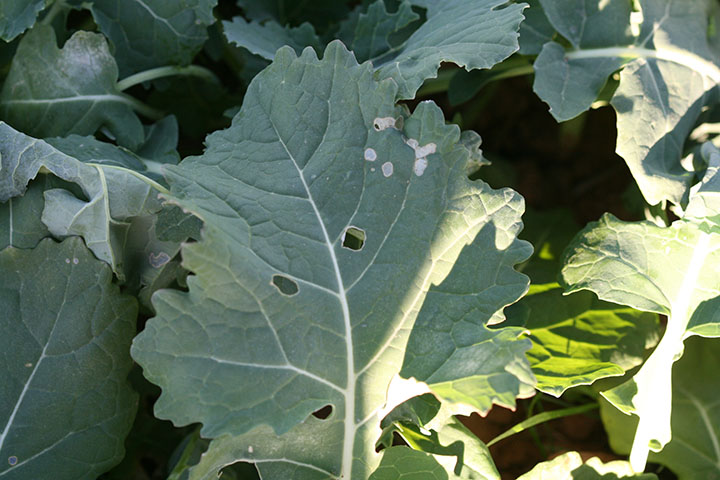 Scouting and Management: Diamondback moth infestations are common in canola, but infestation levels are highly variable. Scout for diamondback moth by pulling plants from a 1-square-foot area, shake the collected plants into a white bucket and count larvae. Larvae dangling on the plant from silk threads should also be counted. Take counts in at least five locations to determine the average number of larvae per square foot.

No threshold has yet been established for overwintering larvae, but control should be considered if foliage feeding is significant.

Caution: Diamondback moths are notorious for developing resistance to insecticides, particularly pyrethroids, which are the primary registered insecticides for use in canola. Therefore, check fields after an insecticide application has been made to ensure adequate control has been achieved, and rotate chemical classes if multiple applications are required.

Description and Life History: Variegated cutworm moths have a wingspan from 1.5 to 2 inches. The forewings are mottled brown or yellow, with white hindwings, colored with brown lines and margins. Larvae are pale brown to gray, with mottled dark brown areas (Figure 10). The larvae have a distinct series of diamond-shaped white/yellow spots on the first several segments and reach up to 1.5 inches when mature. Variegated cutworm populations go through three to four generations per year in Oklahoma (Figure 11). It winters as a pupa in the soil, but can be active year-round in warmer climates and adults will migrate northward. The larvae grow through seven instars in four weeks to six weeks. 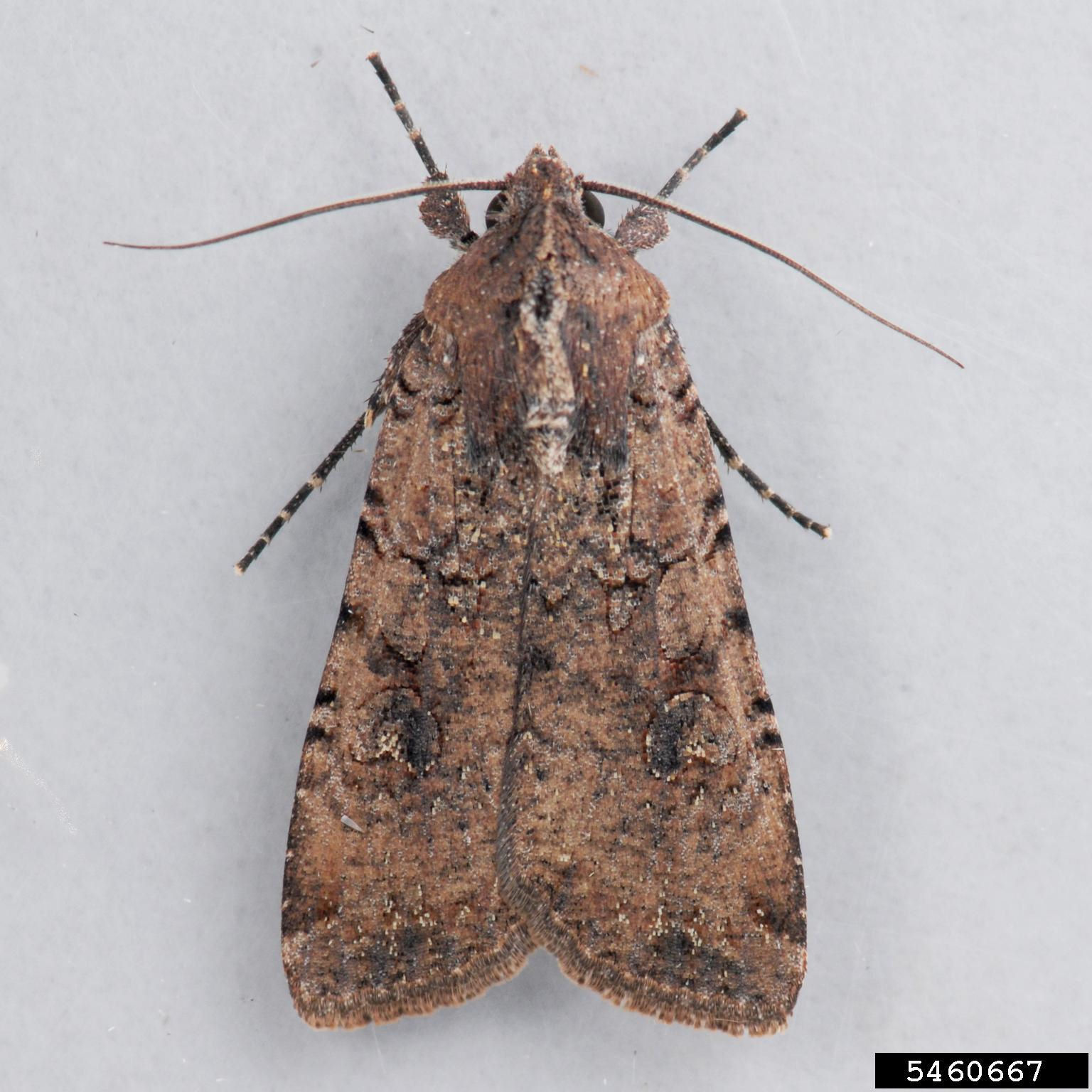 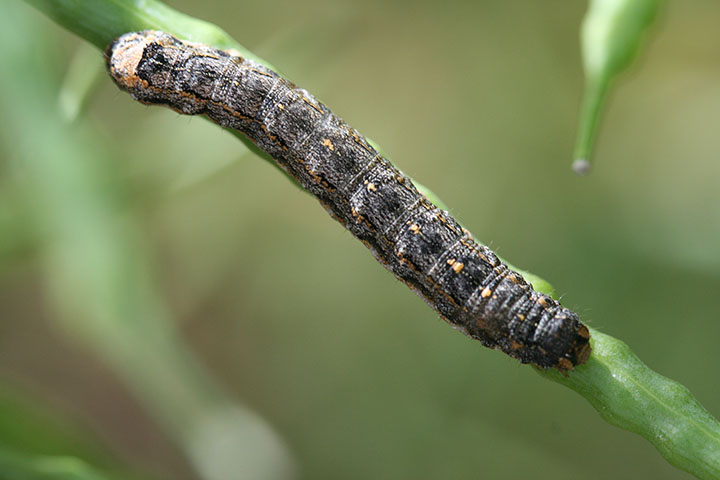 Damage: Larvae are the damaging stage. It is a “climbing cutworm,” and will literally climb up and down the canola plant to feed. It will strip the green material from the raceme, and damage developing pods (Figure 12). 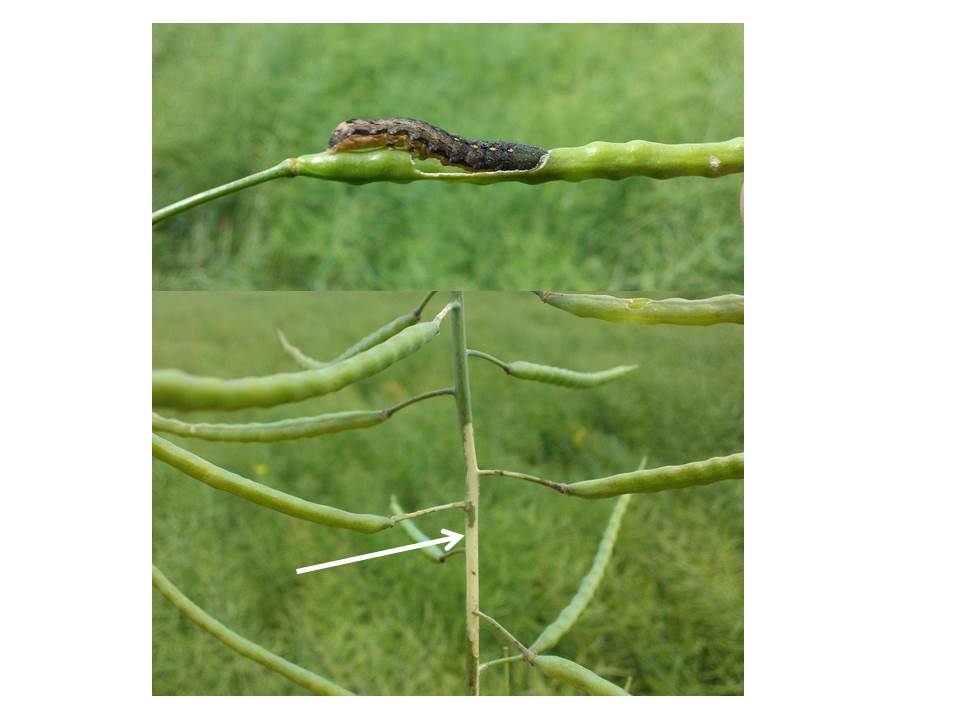 Scouting and Management: Infestations of variegated cutworms are rare in canola, but look for damage signs (damaged pods), as well as the caterpillars themselves. They typically prefer to feed at night and like to hide underneath leaf material and dirt clods during the day. When disturbed, they curl up (Figure 13). It is very important to check the field before deciding to spray and check several locations in the field to get an accurate assessment. 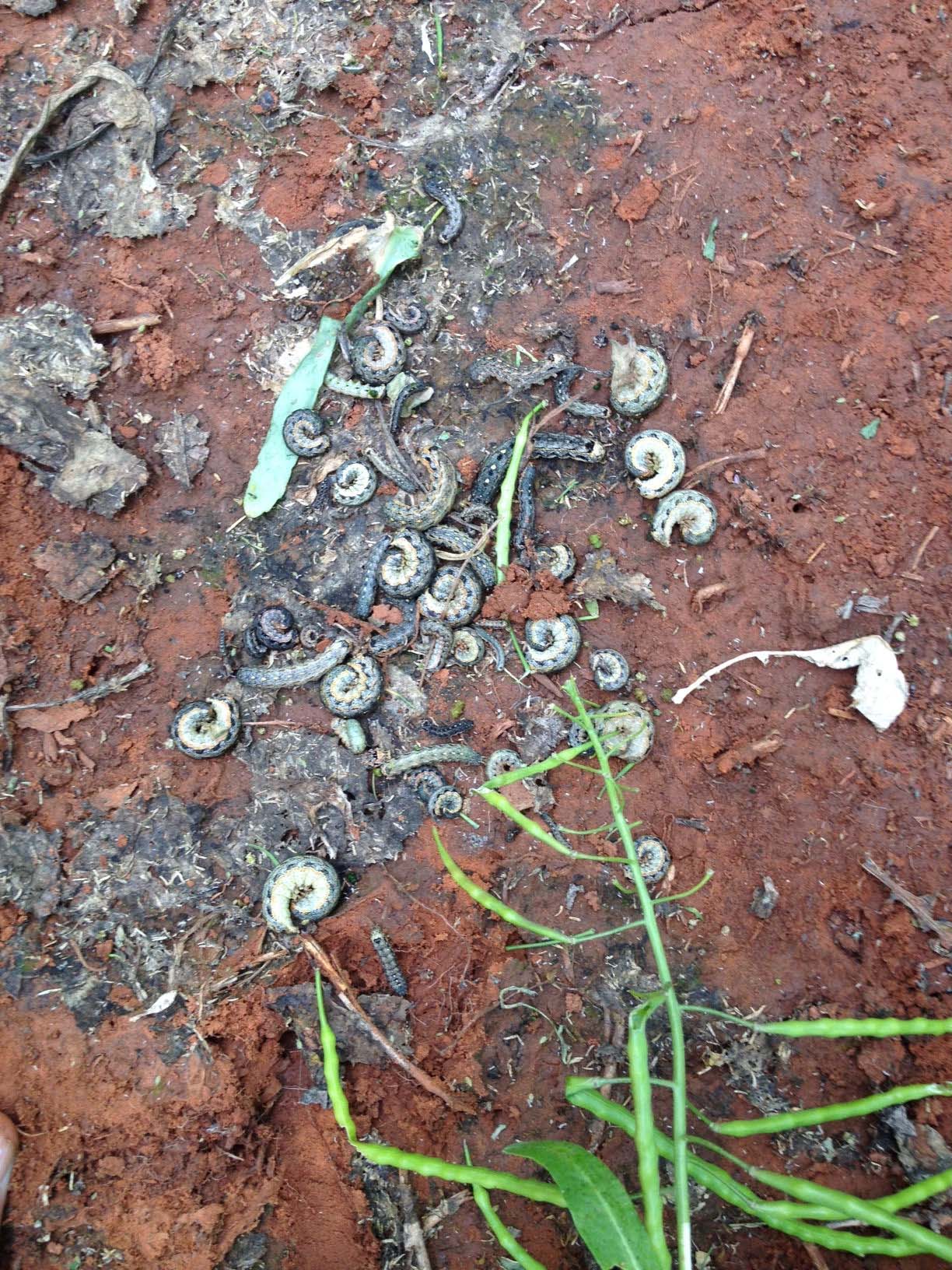 No research-based threshold has yet been established for the variegated cutworm; however, the threshold for the bertha armyworm in canola, which causes similar damage is two or more caterpillars per square foot.