Urban horizontal directional drilling (HDD) mud is mixed material generated during horizontal directional drilling process. Other common names used for this by-product are urban subsurface residuals, spent drilling fluids and spent drilling mud. This growing industry is a non-invasive alternative to trenching and is commonly used for boring holes for the installation of fiber optic cable, sewer lines, gas lines and many other common utilities (Figure 1). As the HDD industry continues to grow, so does the amount of drilling mud needing disposal. Currently, the most common method of disposal is by landfills. This is both costly and time-consuming for the contractor doing the drilling, and this cost is ultimately passed on to the municipality or customer that the contractor is doing the work for.

A typical HDD mud consists of water and cuttings (i.e. soil or rock) from the borehole. However, additives are sometimes used in the drilling fluid to aid in the drilling process depending on the geologic formation or substrate being drilled through. Possible constituents that may be added to the initial drilling fluid include:

The Oklahoma Corporation Commission (OCC) has the jurisdiction in regulating the land application of spent HDD mud, but there are no such regulations or recommendations currently available. This is likely due to the lack of research addressing the environmental impacts of spent drilling mud. 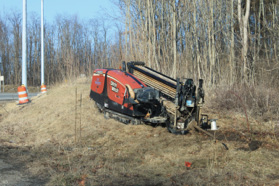 Figure 1a. Picture of a HDD rig 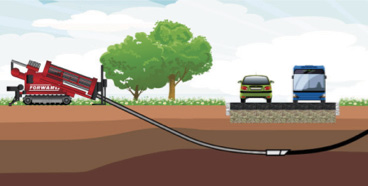 What is in HDD mud?

Oklahoma State University has recently performed an in-depth chemical and physical characterization of spent HDD fluids. A total of 56 samples from 28 different states were received and analyzed for total solids, pH, total salts, sodium, plant available nutrients and heavy metals. Fifteen of the samples had metal concentrations above the typical levels found in Oklahoma soils (Table 1); however there were no metal concentrations above the limits for EPA 503 Criteria for Heavy Metals for Exceptional Quality Biosolids or the EPA Soil Screening Levels for Residential Soils. This means that if the drilling mud samples were biosolids, no permit would be required for land application. As far as we know, there is no chemical present beyond allowable concentrations that can limit the land application of spent HDD mud as a means of disposal. However, not every single HDD mud, like exceptional quality biosolids, is suitable for use as a pure media for plant growth, such as a potting/container soil (Figure 2). 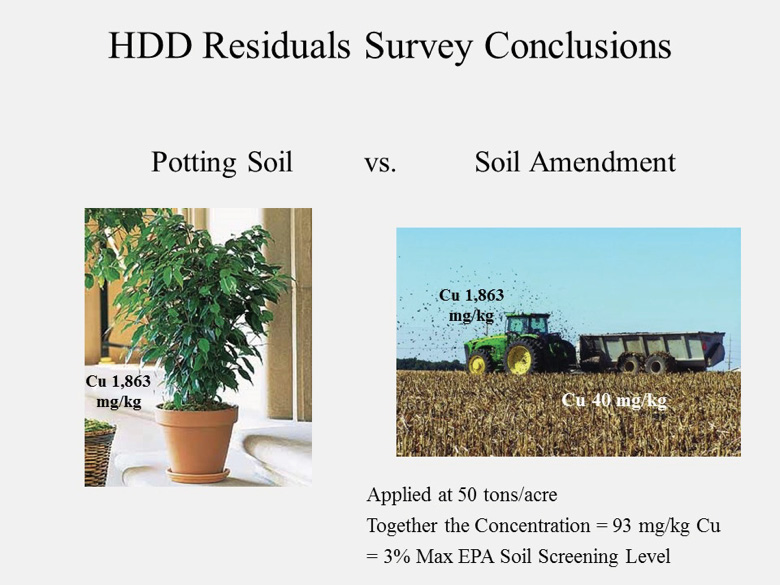 Figure 2. A spent HDD mud with a copper concentration of 1,863 mg/kg may not be safe for a potted plant or the human consumption of that potted plant. However, land application and incorporation of the same spent HDD mud at a rate of 50 tons solids/acre to a soil containing a normal level of copper (40 mg/kg) results in a soil concentration of only 93 mg/kg. This is only 3 percent of maximum EPA Soil Screening Level for Residential Soils (3100 mg/kg). Note that a copper concentration of 1,863 mg/kg was the highest copper level observed in the HDD residuals survey.

Many HDD residuals contained plant available (as assessed by Mehlich-3 extraction) nutrients such as phosphorus, potassium, calcium and magnesium in appreciable amounts. Solids content ranged from 4 percent to 45 percent. Thus, application of the material is most easily achieved by spraying as a slurry onto soils.

Two field studies were conducted to examine any potential agronomic or environmental impact resulting from the land application of spent HDD mud. Because there was nothing chemically limiting in the material, application rates were based on total solids. Application rates were 0, 10, 20, 30, 40 and 50 tons of solid per acre. The mud was sprayed onto the surface in a slurry. The first study involved surface application of HDD mud to a typical Bermudagrass hay (Figure 3) followed by measurements of soil chemical properties and resulting biomass production. Biomass measurements at 120 days after application revealed no statistical difference between any of the rates applied and the control (no amendment). Soil samples also revealed no effect of land application of mud on soil chemical analysis. 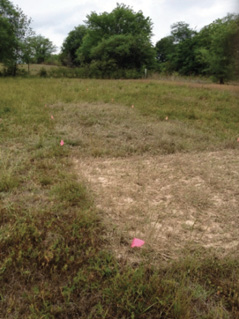 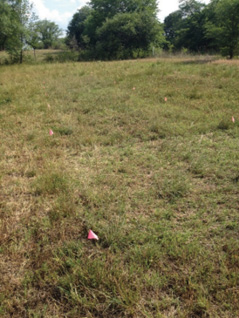 The second field study involved the application of HDD mud to a bare ground, which was meant to represent a highly disturbed construction site (Figure 4). Prior to surface application, the topsoil was scraped from the surface to expose subsoil. Bermudagrass seed was then spread at the suggested rate for establishing a new yard, followed by application of HDD mud at the same solids loading rates previously described. Percent cover was calculated on day 60 by digital image analysis. Percent cover for the plots that received 10 tons of solids per acre was significantly higher than the control (no amendment) and all other rates applied. Percent cover for plots that received mud at the rate of 50 tons of solid per acre was significantly lower than the control (Figure 5). 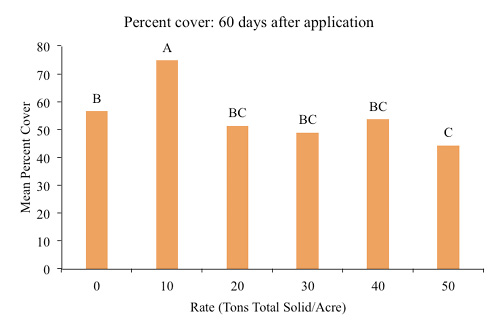 Some level of compaction is apparent in much of Oklahoma’s cropland. However, impact on crop productivity is dependent of its severity, soil type, crop type and the weather. The best cure for compaction is prevention. Utilize proper tire sizes and inflation pressures, or consider tracks to prevent surface compaction, which is most detrimental in no-till systems due to its impact on crop establishment. Minimize the traffic of heavy loads across the field, especially in moist soil conditions to prevent deep compaction. Lastly, avoid overgrazing cropland under no-till management, which can cause severe compaction in the near surface soil.