Silage is the end product of the fermentation of a high moisture crop (40 to 80% water).  The first record of a containment structure or “silo” in the U.S. is during the late 1800s.  Ensiling gained slow acceptance until today when silage contributes over 50 percent of the nutrients for beef and dairy cattle production in the U.S.

Regardless of whether you harvest hay or silage, producing high quality forage requires sound management practices.

The more common advantages of harvesting forage as silage compared to hay are as follows:

The more common disadvantages of silage compared to hay are as follows:

This fact sheet provides management tips for properly locating, constructing and managing a bunker silo to obtain the maximum benefit in both feed quality and quantity.

Select an elevated location that allows rain and snow melt to drain from the site rather than toward the bunker.  Do not locate the bunker in a low area that may become inaccessible due to mud or standing water.

Locate the bunker at least 150 feet away and down slope from existing wells to minimize possible contamination from seepage.  In highly permeable soils or locations with shallow wells, increase this distance to at least 300 feet.

Locate the bunker as close to the feeding system as possible.  Consider how you will move the silage to the cattle.  You must also consider what, if any, modifications are needed to the feed bunk or feeding system.  One of the more common problems in locating a bunker is under estimating the space required to efficiently move equipment in and around the bunker.

Slope concrete floors one inch per eight feet to drain precipitation and silage leachate out of and away from the bunker.  Use a two to five percent surface slope to drain runoff away from bunkers, preferably into a grassed waterway for infiltration.  For high moisture silage where large quantities of seepage could cause an environmental concern, collect runoff in a storage basin for later disposal.

Certain design criteria must be met to minimize spoilage and to maximize the effective use of bunker silos.  These criteria include silage removal rate and bunker width, height and length.

In Oklahoma, a minimum of six inches of silage must be removed from the silo face each day to keep ahead of spoilage in warm weather.  Design the bunk to remove at least eight inches per day.  In larger operations or when haylage is stored, consider designing for a 12-inch removal per day to minimize spoilage.

The maximum height is usually limited by cost.  In some cases, it can be limited by the maximum safe vertical reach of the silage unloading equipment.

Bunker length:  Length is primarily determined by the total quantity of forage that must be stored.

The volume of silage needed per day can be estimated knowing the silage density.  Typical densities are listed in Table 1.  Density is highly influenced by harvest moisture content, packing tractor weight and packing time.  The higher packing densities are achieved using higher moisture content forage that is packed with a heavy tractor for an extended time, usually greater than 30 minutes per load.

To determine the daily volume, divide the amount fed by the approximate density:

The volume to be removed from the bunker is:

If the bunker wall height in our example is 10 feet, the settled depth is:

Finally, decide what the face removal rate will be.

Remember, you should remove at least six inches per day.

For our example, use eight inches or 0.67 feet.

For our example, bunker width is:

Bunker width must be at least twice the width of your packing tractor to make sure the middle can be packed.  Since 24 feet is over twice the width of a 10-foot wide tractor, this width is acceptable.  If the calculated bunker width is less than twice the packing tractor width, you must change some of your assumptions such as face removal rate or bunker height.  If you have a small herd, a reasonable combination of dimensions may not be possible.  If so, you may have to abandon using a bunker silo.  Consider using a bag silo as an alternative storage.

The bunker length can be calculated once you have finalized the face removal rate and when the feeding period is known.

For our example, assume a 360-day feeding period and using the above equation, the silo length is:

Consider limiting bunker length to about 120 feet, because very long silos require excessive driving to remove feed when the bunker silo is less than half full.  One method to improve the convenience of silo emptying and flexibility of use is to make several shorter bunkers.  In our example, two 120-foot silos could be constructed instead of one at 240 feet.  Another alternative is three 80-foot silos for added flexibility.  The total volume or capacity would be the same.  Flexibility is especially important if you harvest hay silage in several cuttings.  Each silo could be sized to store each separate cutting.  A multiple silo arrangement allows you more flexibility to store other forages and different forage qualities.

The bunker silos selected may be configured as shown in Figure 1.  The common walls used between silos are less costly than two walls loaded from only one side.  Selecting a common wall height for all silos helps make multiple silo design more manageable.  Table 2 gives approximate bunker silo capacities for alfalfa, corn and sorghum silage. 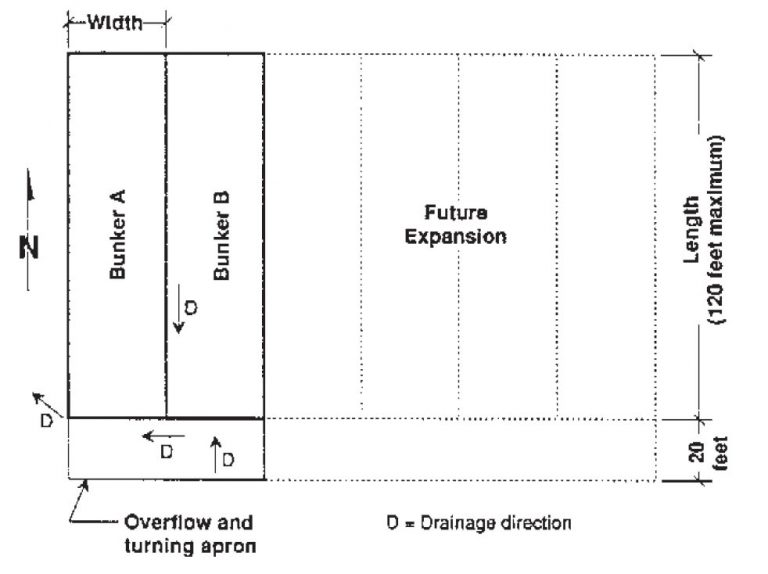 Bunker silo management begins at harvest.  For best results, chop corn and sorghum silage at 1/4 inch and hay silage at 3/8 inch theoretical length of cut.  The moisture content should be between 55 and 70 percent.  Higher moisture contents give better packing and preservation.  Several methods of distributing the forage in the bunker are possible.  A self-unloading wagon can be drawn through the bunker distributing its load along the way.  Below ground bunkers can be filled by discharging a self-unloading wagon over the side as it drives by.  The most common method is to dump the forage at the face of the pile and push it up with a front-end loader or blade.  Figure 2 is a cross section of a typical bunker silo filled by layers.  Cornell research shows that a progressive wedge-filling method provides better carbohydrate digestibility than other methods. 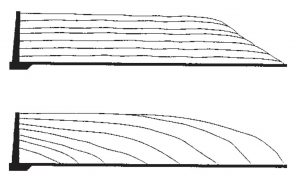 Whatever method is used for filling, the silage should be distributed in thin layers.  The tractor should then be driven over the whole surface as many times as possible before the next load arrives.  To obtain the best packing, the tractor should be heavy with single instead of dual wheels.  Four-wheel drive tractors provide the best control and traction on moist and loose forage.  An industrial loader with a heavy duty transmission is often the loader of choice for larger feeding operations.

The bunker should be filled as quickly as possible.  This is why it is desirable for hay silage bunkers to hold a single cutting.  This bunker can be filled and covered without having to be uncovered when the harvest progresses quickly.

Proper silage removal techniques minimize face surface exposure to oxygen spoilage.  Remove only as much polyethylene from the top surface exposing silage that will be needed during the next few days.  The front-end loader should be used to shave the silage face from the top down.  Forage accumulating on the bunker floor is then scooped up with the front-end loader.  This procedure keeps a smooth, tight face with minimal exposure to oxygen.  It is tempting to stab the front-end loader bucket into the face and lift.  This opens fissures and allows large amounts of silage to loosen.  However, these fissures allow oxygen to penetrate deep into the silage face exposing more silage to spoilage.

Silage made in bunker silos using good management practices (including a polyethylene cover) can be expected to produce storage losses of 10 to 15 percent of the original dry matter.  Poor management practices (without a cover) might yield losses as high as 30 to 40 percent.  Consider an example where one of the 24 feet by 120 feet corn silage bunkers (each holding 196 tons dry matter) designed earlier is not covered.  The value of the silage is assumed to be $40/ton dry matter.  Also assume, for this example, the dry matter loss is 15 percent higher for the uncovered compared to a covered bunker.  The feed value lost as a result of not covering the silage can be estimated by the following equation:

For the above example:

Assuming a polyethylene cover costs $200, the return is $976 ($1176 minus $200) not including tires or labor.  The total time to cover and uncover a bunker this size will be about 16 man-hours.  If tires are at no cost and labor is $10/man-hour, the return to management for covering the bunker is $816 ($976 minus $10/man-hour x 16 man-hours).  Naturally, the return when using a cover on higher valued forage such as alfalfa would be much greater.

Learn how to identify, manage and control the invasive horseweed plant and the dangers of not controlling the pest in your winter wheat field.