Biology and Control of the Pecan Weevil in Oklahoma

The information contained in this fact sheet deals specifically with biology and control of the pecan weevil in Oklahoma. Information on monitoring and trapping pecan weevil can be obtained in OSU Extension Fact Sheet  EPP-7190. Because insecticide recommendations and labeling can change dramatically from year to year, that information is not presented in this fact sheet; however, it can be found in OSU Current Report CR-6209.

The pecan weevil is the major pecan insect pest in Oklahoma and throughout the native range for pecan, Caryae illinoisensis. Feeding and egg laying (oviposition) occur on Carya (e.g. hickories and pecan) and Juglans regia (Persian walnut).

Since weevil populations are quite variable from one orchard to another, it is important to identify specific characteristics associated with particular sites that might be at higher risk for infestations. These characteristics can be linked to simple things like annual rainfall and crop maturity; however, infestations can also be related to cultivar selection, surrounding topography and soil type. In addition, fruit set in one area of an orchard or grove can often determine the dispersal of weevil infestations across the surrounding area. 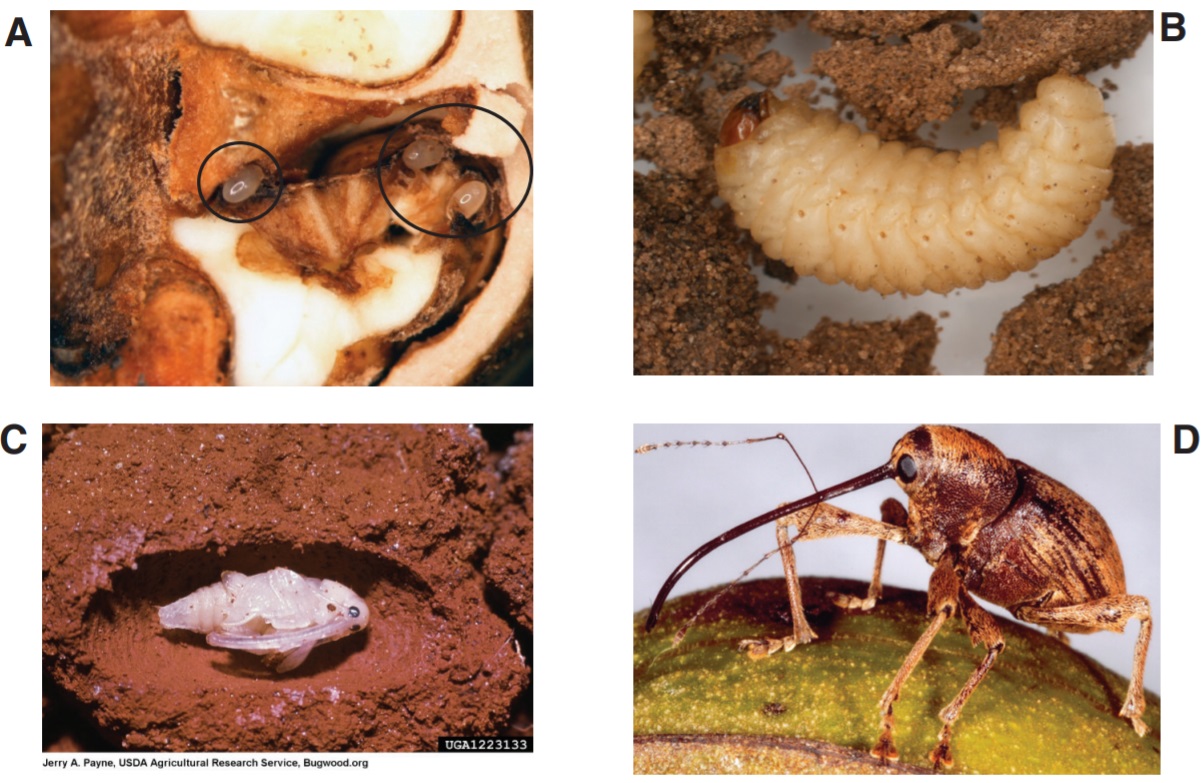 Pecan weevils usually lay eggs in pecan when the fruit is nearly hardened and contains well-developed kernels (i.e. dough stage). Rarely, female weevils oviposit in pecans still in the water stage but when they do, larvae do not survive. Using her chewing mouthparts (at the end of the long proboscis), the female weevil chews a hole through the pecan shuck (involucre). After penetrating the shuck, she withdraws her snout, turns around and probes through the hole with her ovipositor until she reaches the shell (pericarp). A great deal of effort is involved in chewing through the shuck then penetrating the hard shell, so the female weevil must grip tightly onto the shuck and rotate around the initial penetration site. This process creates tracking marks on the shuck (Figure 2). The tiny eggs (usually 3 to 4 in each nut attacked) are generally deposited on the distal end of maturing pecan, where development of the seed embryo and cotyledon begin. Female weevils can extend their ovipositor into various regions of the developing kernel (Figure 3). Egg hatch (eclosion) occurs within six to 14 days after deposition. 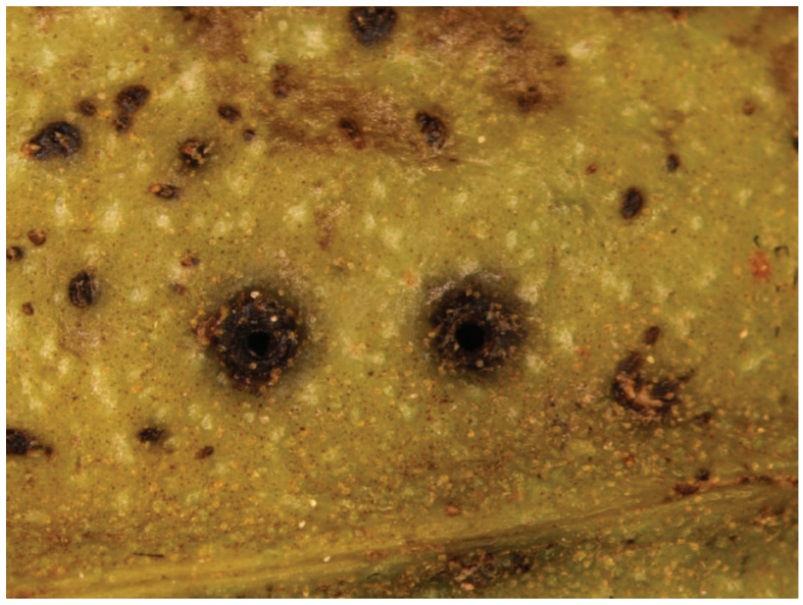 Figure 2. Tracking marks created by female weevil chewing and drilling ovipositor through the shuck and shell. 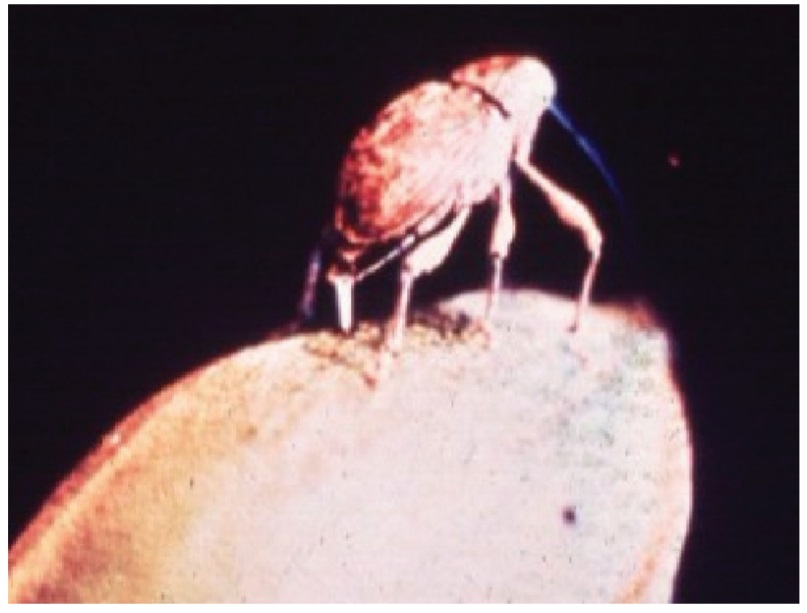 Figure 3. Female weevil with ovipositor extending through the shuck and into the nut.

Similar to many grubs, pecan weevils exhibit four larval instars; however, while the first three average approximately 13 days each in duration, the final instar may feed for five to nine days, but will spend from one to two years in the soil, without feeding. During that prolonged period, larvae (and subsequently the pupa and pre-emergent adult) will have greater stores of fat body, undeveloped reproductive organs and an 8-fold decrease in oxygen consumption compared to active stages. This tells us that diapausing weevil larvae, pupae and adults are well protected, do not feed and can essentially “sip” oxygen to preserve themselves and their air supply even under flood conditions. When fully grown, pecan weevil grubs have a creamy white body that is about ¾ inch long with a reddish-brown head capsule (this is why they were often referred to as redheads in older literature). After feeding within a nut, larvae will chew exit holes about 1/8 of an inch in diameter in the shell, emerge from the nuts, and drop to the ground (Figure 4). Larvae will burrow into the soil to various depths depending on the soil type and condition of the soil where they landed. Most larvae penetrate the soil to a depth of six to nine inches. Once they have reached their final resting depth, larvae will construct a hard, almost impenetrable earthen cell, where they will remain in diapause until they pupate, molt to the adult stage, and ultimately emerge. 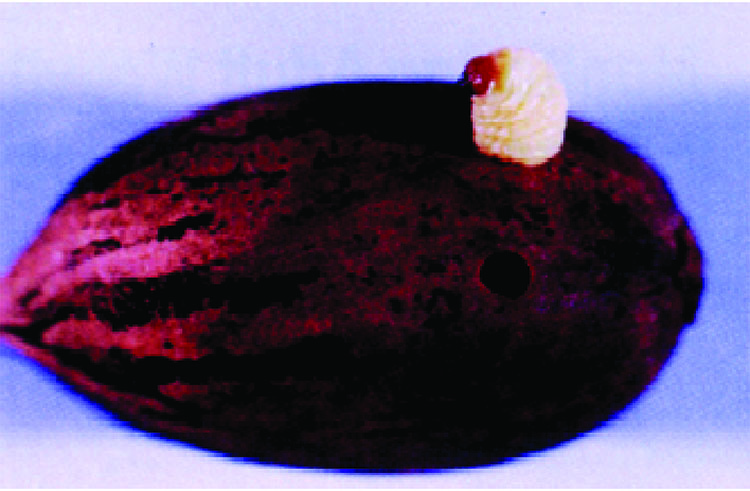 About 90 percent of the larvae that enter the soil the first year after feeding on pecans spend one year in the soil before pupating. The remaining 10 percent will not pupate until the following year. The pupal stage of the pecan weevil is a whitish, mummified-looking version of the adult (exarate pupa; Figure 1C). The pupal stage lasts approximately three weeks (a little longer for females than males).

After transformation from the pupal stage, adults will remain inactive within the earthen cell and do not attempt to emerge from the soil until August of the following year. This makes the total time from first entering the soil as larvae to exiting as adults approximately two (90 percent) or three (10 percent) years. The adult pecan weevil is a light-brown to grayish snout beetle, measuring about ½ inch in body length (Figure 1). The snout of male pecan weevils is about half the length of the female’s, and curves primarily at the tip. Antennae of the male also appear to attach to the snout half the distance from the face (Figure 5A). Female pecan weevils possess a longer snout, which curves gradually. Antennae of the female pecan weevil attach to the snout about 1/3 the distance from the face (Figure 5B). Two important events dictate the timing of pecan weevil emergence and damage on pecan including rainfall and nut maturity. In Oklahoma, peak emergence of weevils generally occurs from late August to mid-September; however, this timing can occur earlier or later depending on soil moisture. Typically, weevil emergence increases three to four days after a 1- to 2-inch rainfall. Soil moisture alone; however, does not dictate weevil emergence and this insect has evolved in the flood plain environment for centuries with great success. Another important cue that stimulates weevil emergence from the soil is nut maturity. While the pecan weevil cannot sense nut maturity from beneath the soils surface, this timing has been fixed through years of selection. Therefore, weevil success in propagating the species is closely tied to emerging when fruit are close to the dough stage of development. When drought conditions persist, weevil emergence is often delayed till late September or even October and in some years late population peaks have occurred during this time. This sustained emergence pattern is exactly why trapping and monitoring for weevils until shuck split is important. Regardless of pecan type (native vs. improved cultivar), pecan weevils will begin ovipositing eggs sooner on earlier maturing nuts. After emergence from the soil, pecan weevils enter the tree by either crawling up the bole (tree trunk) or flying directly to the canopy or trunk. Regardless of how they eventually enter the canopy, it appears that the majority of the weevil population orients to the pecan trunk (perhaps as much as 85 percent of the emerging population). This explains why trunk traps (i.e. Circle traps) are more efficient at capturing greater numbers of weevils than other trap types. Once weevils enter the canopy and explore the environment for food and oviposition sites, if no pecans are found (due to alternate bearing, common in unmanaged, native pecan) weevils will fly to another adjacent tree or emigrate from the orchard to more suitable areas. The average longevity of adult weevils is generally between 15 to 30 days; however, female weevils emerging beneath large-seeded cultivars can live for up to 56 days. Generally, female pecan weevils live longer than males and those that emerge early in the season live longer than those that emerge later. 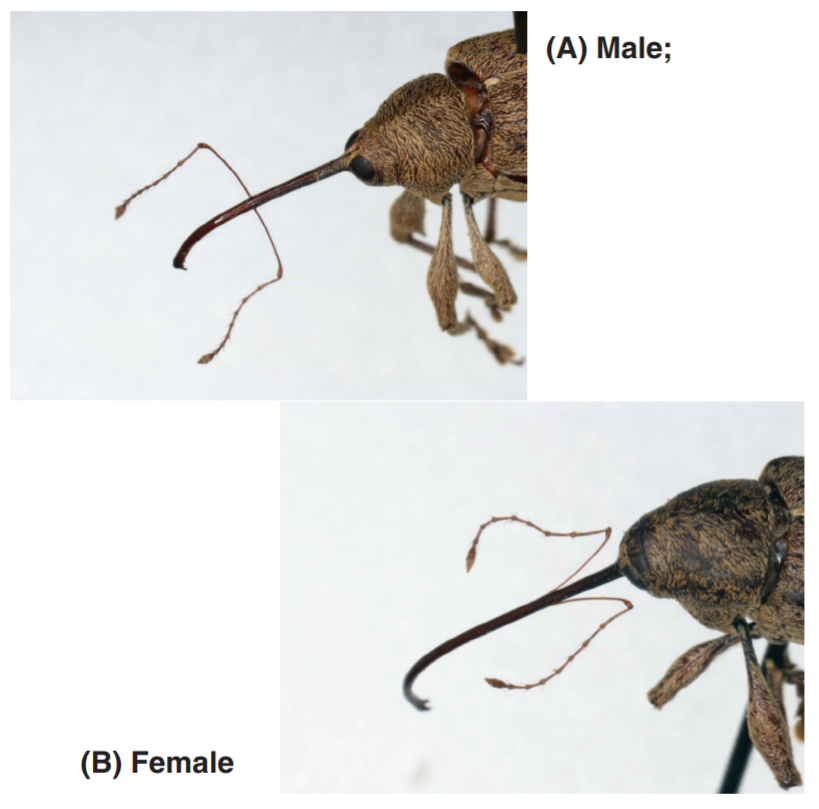 Pecan weevils cause different kinds of damage, depending on the stage of fruit development at the time of attack: 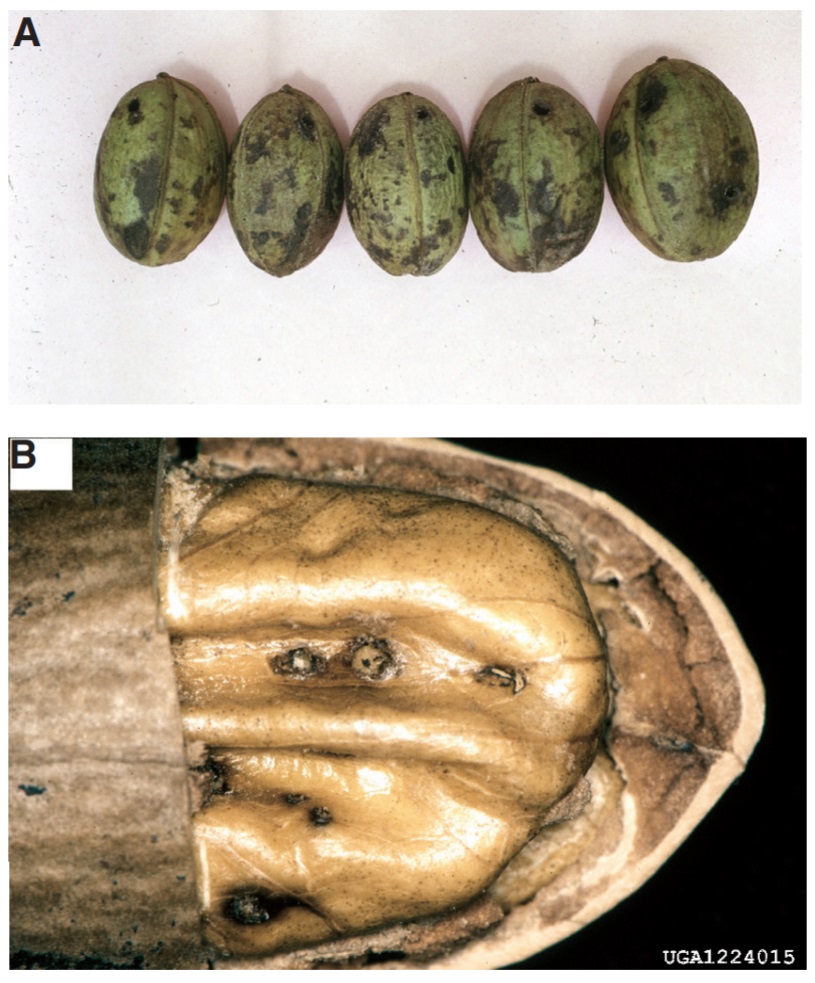 Figure 6. ‘Sticktights’ (A) are smaller nuts with the shuck adhered to the shell. Black spots (B) from pecan weevils feeding on pecan kernels. (Photos courtesy Jerry Payne, USDA/ARS) 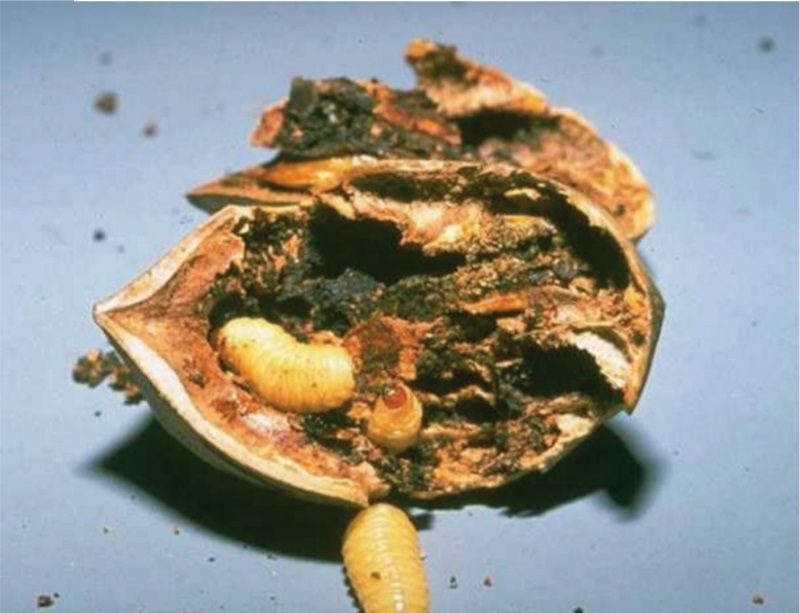 Research suggests that female weevils place a possible marker pheromone that prevents multiple weevils from laying eggs in a single nut; however, if infestations reach incredibly high levels (90 percent or more), and limited oviposition sites are available, then multiple oviposition events may occur. Of course, the consequence of pecan weevil oviposition in pecan is an unmarketable product and continued proliferation of the population throughout the orchard.

Since most of the life stages of the pecan weevil inhabit protected environments, applications used to control this pest are generally targeted at the adult stage. Many attempts have been made by independent researchers and industry representatives to control weevil larvae in the soil using an insecticide. Unfortunately, several factors have lead to the failure of this approach including:

With this in mind, it is important to understand how the weevil develops and makes its way to the pecan tree to see the importance of monitoring and trapping. Complete recommendations on trapping pecan weevils can be obtained in OSU Extension Fact Sheet EPP-7190. Once a threshold is reached in an orchard or grove, treatment should be applied with an airblast sprayer calibrated to deliver a minimum of 100 gallons per acre (Figure 8). Airblast sprayers come in a number of sizes. Larger sprayers can reach the tops of trees in excess of 80 feet and provide excellent coverage to the entire canopy. Regardless of insecticide selected, multiple applications will likely be needed throughout the weevil season, especially if nuts are marketed for retail sales. To ensure penetration and through coverage, commercial growers should be encouraged to treat both sides of each tree. Traditionally, insecticide choices for many growers that allow livestock to graze in their orchards were limited to Sevin insecticide, which is still an effective and safe choice for most applicators. Because of increasing costs associated with this product, and excellent efficacy of some newer generation pyrethroids, this chemistry has become more common. For a complete listing of insecticide recommendations on pecan, including information on fungicides to protect trees from scab infection, consult OSU Current Report CR-6209. This publication is revised each year and contains detailed, current information on pesticide recommendations for pecan. 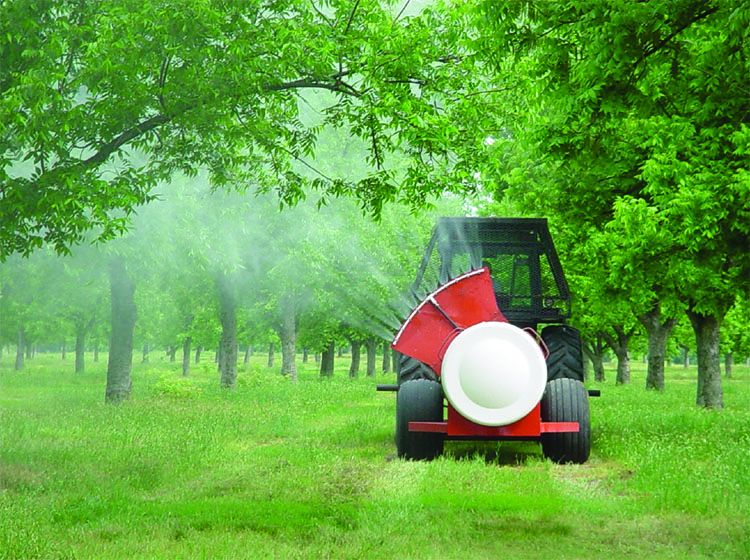