Cover crops have not been extensively researched in Oklahoma cropping systems.  There are however, many potential soil health and cropping system benefits that may be realized from integration of cover crops into farming practices. Cover crops, depending on the species used, can be effective ways to: (1) reduce soil erosion, (2) reduce runoff, (3) reduce evaporation, (4) suppress pests, (5) improve soil and water quality, (6) improve soil fertility by adding nutrients such as nitrogen back into the soil, and (7) serve as forage sources.

Just like any management practice, there are limitations to the benefits of cover crops and some trade-offs to consider.  Cover crops use the same water and nutrient resources required by cash crops. When properly managed, cover crops take advantage of excess water that would have been lost from the system during the fallow period.  A wheat-summer fallow system, for example, will return approximately 59 percent of rainfall to the atmosphere through evaporation with much of this loss occurring during the summer fallow period (for more information consult Extension Fact Sheet PSS-2140).  A cover crop will allow use of this water to realize the aforementioned benefits.  These benefits are realized through the following mechanisms.

Cover crop residue acts as a barrier, which prevents wind and water erosion and crusting.  Cover crops reduce runoff and increase infiltration by slowing water movement.  Shading of the soil by cover crops reduces evaporation in-season and stored rainfall is instead used to grow the cover crop.  After termination of the cover crop, the added residue will continue to minimize evaporation to the benefit of the following cash crop.

A grass species, such as millet or sorghum-sudan, is the best choice if reestablishing residue is your primary interest. However, these grasses will certainly reduce available nitrogen in the soil, but mixing them with a legume will decrease this effect and the nitrogen in the terminated cover crop will be slowly released back to the soil during decomposition of the residues.

We generally discuss benefits of the aboveground residue because it can easily be seen and measured; however, below ground residue in the form of roots and organic matter are also critically important to no-till systems.  Roots serve as a skeleton for the soil, preventing compaction and collapse of macropores and the organic matter provides aggregate stability, further improving soil structure. 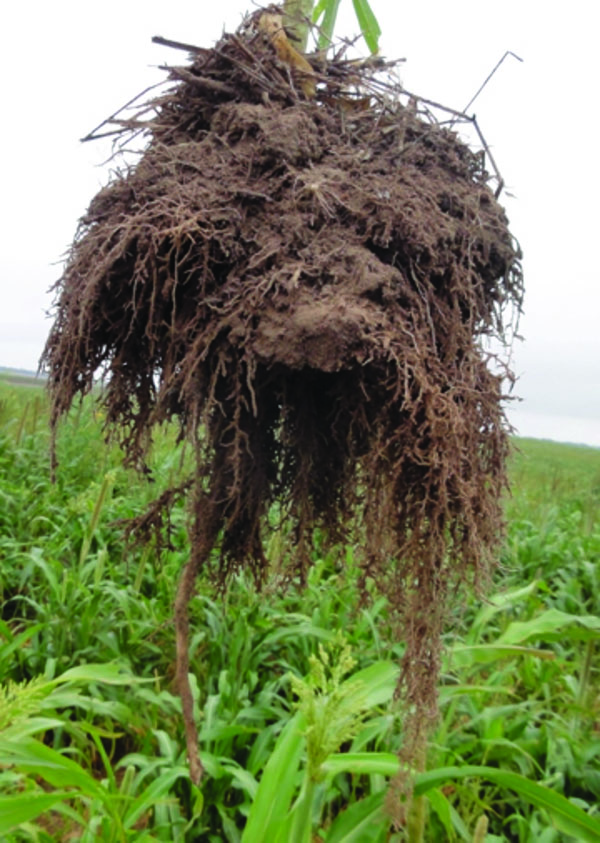 Figure 1. This root mass from a sorghum-sudan cover crop in a sandy loam soil will provide benefits long after the cover crop is terminated.

Planting legume cover crops is a biological method to add nitrogen to the soil. As nitrogen fertilizer costs increase, so does the potential benefit of legume cover crops; however, nitrogen from legume cover crops must be managed differently than that from commercial fertilizers.  Do not expect to see an immediate response from this nitrogen because it must be mineralized prior to crop uptake. This process can take several weeks to several months depending on rainfall and temperature.

Mineralization requires rainfall to provide moisture for decomposition. If sufficient soil moisture is present to allow for cash crop growth but rainfall is infrequent, nitrogen release through mineralization can be much lower than cash crop demand.  However, continuous use of legumes as a part of your rotation will increase the organic N content of your soil and buffer against deficiencies in available nitrogen.

Since speed of nitrogen mineralization can vary, it’s best to take advantage of cover crop nitrogen later in the season by adjusting side dress or top dress nitrogen rates based on actual mineralization.  The easiest and most accurate method of assessing nitrogen mineralization from legume cover crops is by using an N rich strip and sensor based N recommendation.  Besides using the Sensor-based technology, simply use the rule of thumb that each ton of biomass will contain approximately 50 pounds of N for most legume species prior to flowering and 40 pounds N after flowering.  However, in our climate only half of this N can be expected to be mineralized to the following crop, meaning that 20 pounds per ton to 25 pounds per ton could be supplied to the following crop.

Legume cover crops fix nitrogen through a symbiotic relationship with rhizobia bacteria. If legumes have not been gown on a field for a couple of years, it is a good idea to inoculate seed prior to planting to ensure the proper bacteria are present to start the process. Inoculants are crop specific, so be sure the inoculant used is the correct one for the planted cover crop.

Although legumes fix nitrogen, they can also uptake nitrogen from the soil leaving it deficient. In fact, if there is surplus nitrogen available, legumes will obtain the bulk of their nitrogen needs from the soil rather than through biological fixation.   Due to difficultly in predicting mineralization, apply a small amount nitrogen starter fertilizer for cash crops following a legume cover crop. 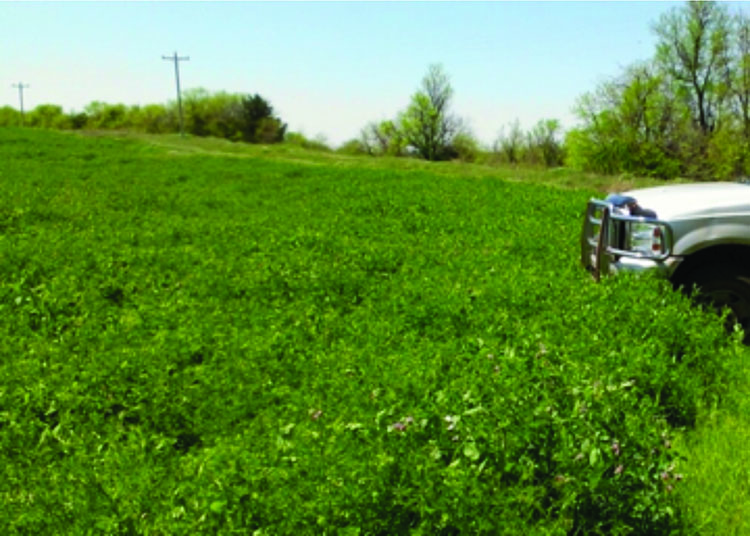 Figure 2.  A mixture of vetch, winter pea, and forage radish in May 2013. This field contains approximately 4,500 lbs/acre of biomass with an estimated 110 lbs of total N/acre or 55 lbs of N that could potentially be available for the following summer crop.

Non-legume cover crop species can be planted to capture nutrients left in the soil, thus preventing leaching of nutrients and acting as a catch crop.  These catch crops are most commonly used to recover nitrogen that may be leach from the surface. In wet environments, it is common to plant a cereal crop after soybean for this purpose.

Deep-rooted cover crops have been promoted as moving immobile nutrients such as potassium from the subsoil to the surface. This movement of deep soil nutrients certainly occurs but at a slow rate, so efforts to quantify this affect have been challenging.

Cover crops can be an effective tool for reducing weed density and growth by competing with weeds for light, water and nutrients during the fallow period.  Unlike weeds, most cover crops are effectively terminated using glyphosate.  Suppression of weed growth using cover crops is particularly useful for herbicide resistant weeds. Of course if weed management is one of your objectives, be certain to control weeds prior to cover crop planting, so weeds do not out compete the cover crop prior to canopy closure.

Cover crops can break certain disease and insect cycles that can develop in simple rotations.  Brassicas and mustards are the cover crops most often cited as providing biofumigant benefits because of the production of thiocyanates during the decomposition of residues from these cover crops.  These compounds are known to suppress bacterial, fungal, insect, nematode and weed pressures; however, research on this subject is very limited and concentrations produced by cover crops are very low.  Therefore, the effectiveness of cover crops as biofumigants is highly uncertain, but many long time cover crop producers commonly report reduced disease incidence and severity in cash crops following brassica and mustard cover crops.

Cover Crops as a Forage Source

Historically, cover crops have not been harvested for forage or grain; however, flexibility is a virtue and grazing or haying cover crops or even harvesting the seed from them to replant or sell provides that flexibility.

Utilizing cover crop forage are generally the most frequently asked questions.  Studies have shown that grazing can increase the rate of nutrient cycling and can be an effective tool to manage excess residue in a no-till system if the following crop is sensitive to heavy residue conditions.  As with any system, there are trade-offs, and grazing will reduce the residue cover thereby decreasing moisture conservation after termination.  There is a potential for compaction in no-till if cover crops are over grazed.  To prevent overgrazing, use a stocking intensity that is low enough to allow for 90 percent to 100 percent ground cover after grazing.  This will ensure that there are still plenty of actively growing roots to prevent compaction and that the surface does not crust or dry excessively.

Utilization of cover crops in Oklahoma is a new concept, and there are countless options on how to use them and what species to plant.  As with any new practice, it is advisable to try a few acres and see how they respond before planting your whole farm.  As mentioned previously, cover crops use soil moisture. In general, much of this water would be lost to evaporation anyway and be replenished during our planting seasons in the spring and fall.  A sandy soil will require less rainfall to recharge its subsoil compared to a heavy textured clay loam.  The sandy soil, because it has a lower capacity to hold water will benefit more from the reduced evaporation resulting from increasing surface residue.  For this reason, consider trying cover crops on your lighter soils first.