12:00 p.m. Taxes during Drought and other Natural Disasters dasnr.zoom.us…
VIEW ALL

The beef cattle industry in Oklahoma loses millions of dollars annually due to external parasites.  These losses result from reduced performance due to blood loss, irritation and annoyance.  Indirectly, diseases affecting cattle, dogs, and humans may be transmitted by external parasites of beef cattle.

Flies, ticks, and lice are major pests of cattle.  Several species within each group of parasites exist and because of their seasonal occurrence, external parasite control is a year round consideration.  Proper identification is necessary for determining the appropriate treatments.  Control should be based on economic thresholds when possible.  Timely applications of recommended insecticides should improve control efforts.  Some pest problems may also be reduced by avoiding: 1) the introduction of infested animals into the herd; 2) poor nutrition; 3) overcrowding; 4) sloppy feeding and watering of animals; and 5) inadequate manure handling.  Elimination of fly-breeding sites around feed lots or premises reduces filth flies, (houseflies and stable flies).

When treatment becomes necessary, insecticides may be applied directly to cattle as sprays, dusts, pour-ons, or self-treatment devices.  They may be given orally or subcutaneously injected, administered as a bolus, fed as treated feeds or mineral blocks, or in self-treatment devices such as backrubbers, dust bags, oilers or ear tags.  Fly populations around livestock premises are treated with residual sprays, mists, and baits.  The OSU Extension Agents’ Handbook of Insect, Plant Disease, and Weed Control is updated annually and has a list of recommended insecticides and management practices for the various pests discussed in this publication.

Horn flies are the most noticeable and abundant flies on pastured cattle.  These small blood-sucking flies are common from April through October.  Left uncontrolled they may reach several thousand per head.  Adults are 3/16” in length and feed intermittently on the bodies of cattle and spend most of their time resting on the backs of cattle (Figure 1).  Females lay eggs in fresh cow manure, and in hot weather the horn fly can complete its life cycle from egg to adult in 10 days.  This rapid development allows horn fly populations to explode in a short time and contributes to the resistance problem associated with horn flies.  Emerging horn flies may travel 10 miles searching for cattle, in which case, dragging pastures may be a questionable practice.

Control of horn flies should begin when 100 flies per head are observed.  Researchers have shown that 15 to 30 lbs. of extra gain in calves is achieved over the summer when horn flies are controlled.  Ear tags continue to provide a convenient method of horn fly control.  However, resistance across the state varies with past usage of ear tags containing pyrethroids.  Producers should rotate from organophosphate ear tags after three or more years to a program using sprays, backrubbers, dust bags or use pyrethroid ear tags.  Do not use ear tags containing pyrethroids for more than one year.  Alternating control procedures will provide the best long-term horn fly control.

The stable fly, normally a pest around animal premises, has become a problem on pastured cattle in the late spring and early summer in recent years.  This fly is 1/4” in length and both sexes are fierce biters.  These flies concentrate on the legs and bellies, and cattle often stand in water for hours to get relief. The suggested economic threshold is five flies per leg (Figure 2).  Under these conditions treatment may be economically sound.  Thorough soaking of feet and legs with a spray is required for good control.  Persistence of an insecticide is short-lived when animals wade in water or tall grass.  Self-treatment devices, ear tags, or pour-ons seldom give effective control of stable flies.

Horse flies are large and range in size from 3/8” to over an inch in length depending on the species (Figure 3).  The female fly feeds intermittently and frequently.  This feeding habit makes some horse flies a good vector of anaplasmosis.  The most common horse fly in north central Oklahoma, Tabanus abactor, was confirmed to be a mechanical vector of anaplasmosis more than 40 years ago.  In most horse fly species, only one generation occurs per year.  Most species are numerous in brush and tree-covered pastures especially near creek bottoms.  The larvae develop in wet soils or moist soils in heavily wooded areas.  Treating the soil for the larvae stage is impractical.  For species with preferred feeding sites along the backs of animals, backrubbers provide some control of horse flies.  However, horse fly species feed on the legs and undersides and any control is often poor at best.

Unlike the previous mentioned flies, face flies are not bloodsuckers.  This large fly is 5/16” in length and resembles the housefly.  It feeds on flowering plants as well as tears, saliva, mucus, and blood oozing from animals.  While research has not shown production losses from the direct effect of face fly nuisance, it has been demonstrated that face flies are important in spreading Moraxella bovis, the bacterium that causes pinkeye in cattle.  Face flies are active from March through October and are most prevalent after June.  Large numbers of face flies have been reported in previous years from Northeastern Oklahoma, but recently populations have been very low.  During heavy outbreaks, producers should consider controlling this pest, especially if pinkeye is a common problem.

Another fly that is troublesome to cattle is the heel fly.  This pest is about the size of a honey bee.  Heel flies lay eggs on cattle in the spring and early summer that hatch into larvae that tunnel through the skin.  Animals being chased by heel flies often exhibit uncontrolled fear that causes them to run wildly with their tails high in the air.  Spraying during this time might provide some short-term relief.  Control of this pest is usually directed at the larval stage or grub.  Cattle should be treated for grubs after the heel fly season but at least six weeks before grubs appear in the back.  In Oklahoma, October 1 should be the cutoff date for grub treatment.  Treatment with any of the new materials listed for control of intestinal worms will also control the larval stage of cattle grubs. 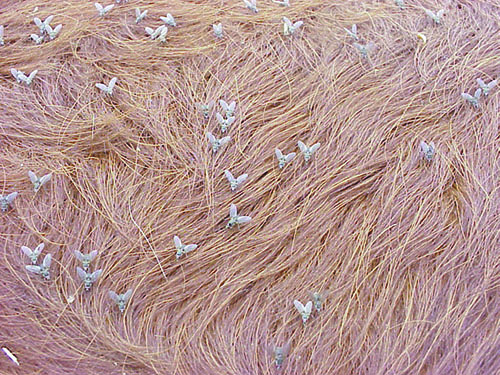 Figure 1. Horn flies on back of cow. 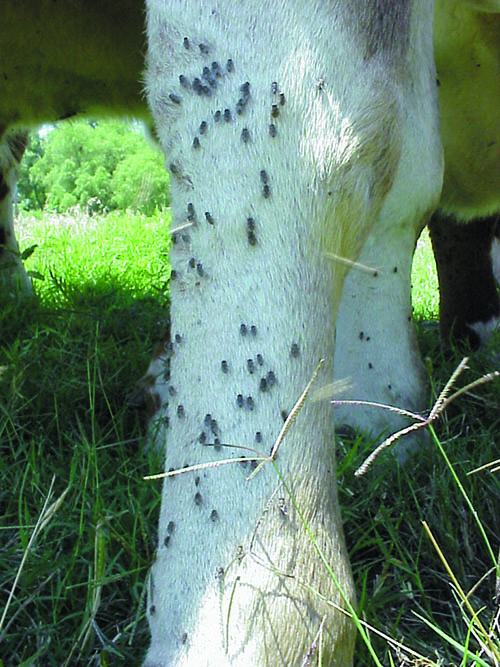 Figure 2. Stable flies as they normally appear on legs of cattle.

Flies that most often occur around animal premises are the housefly and the stable fly.  Fly populations may reach extremely high numbers around farm buildings where feed and animals are located.

The housefly is a common pest readily recognized by most everyone.  It is a dull gray with four stripes behind the head and has a pale gray to cream colored abdomen.  It is about 5/16” in length with sponging-sucking mouthparts and may spread disease from animal to animal or from manure to feed.  Housefly larvae develop in fresh manure.  Egg to adult development may require as little as 8 days for completion.

Electrocuter light traps are marketed for fly control.  The light traps that “zap” insects may be helpful in tight, enclosed areas, especially indoors with good sanitation.  However, outdoor use of these traps does not effectively reduce numbers.

Ultrasonic devices are marketed for fly control also.  Ultra-high frequency sound waves generated by these devices supposedly disrupt living, mating, and survival of pests.  However, research has not been able to demonstrate effective control using these devices.

Lice spend their entire life cycle on their host.  The life cycle requires three to four weeks during cold weather.  Carrier animals in the herd seem to harbor infestations throughout the year.  Low numbers exist during warm months, but with the onset of cooler temperatures high numbers soon develop.  Ten or more lice per square inch have significantly reduced weight gains in cattle while light infestations did not.

Lice should be controlled in late fall rather than waiting until spring when obvious symptoms develop.  Herds with a history of springtime lice problems should receive a preventive treatment in the fall.  Introducing new cattle into the herd may spread lice.  Inspect cattle by parting the hair and examining the skin for lice.  If two or more lice are found per four-inch area examined, treatment should follow.  Ringworm is sometimes mistaken for lice infestations.  If cattle appear lousy after lice treatments, ringworm may be involved.

Several species of ticks attack cattle in Oklahoma.  The winter tick is a one-host species that feeds primarily on large hoofed animals.  It can be a severe problem on cattle and horses in some areas.  Male ticks are effective vectors of anaplasmosis because they often are removed from a host through grooming and may attach to another host, thus spreading the anaplasmosis pathogen.  Larvae attack host animals from early October through April, molt to nymphs on the host, feed and then molt to the adult stage while still on the host.  Both males and females take a blood meal, mate, and then the engorged female drops to the ground and lays eggs.  Tick populations on the host peak between late October and mid-February.

The black-legged tick is a three-host species that is most abundant in the eastern one-half of Oklahoma.  The larvae feed on lizards, birds, and rodents, while the adults feed primarily on cattle, horses, deer, dogs, cats, and humans.  The adult activity begins in early October and continues into April.

The lone star tick (Figure 4) is the most abundant tick species in the eastern one-half of the state.  All life stages of this tick attack cattle and other mammals and can be a severe pest from March until August.

The Gulf Coast tick (Figure 5) occurs in the eastern one-half of Oklahoma, into Kansas, Missouri, Arkansas, and Texas.  Larvae and nymphs attack rodents and birds, while the adult is the only life stage that feeds on cattle, specifically on the ears.  Adult tick feeding causes damage to the ears of cattle, commonly referred to as “gotch ear,” which reduces the market value of an animal.  Recently, the Gulf Coast tick has been shown to be an intermediate host for a protozoan parasite of dogs and other canines.  The mode of transmission is through oral ingestion of an infected adult tick.  The disease, hepatozonosis, is a very debilitating and painful condition.  Dogs used for working cattle in areas where ticks occur could be at risk.

The American dog tick occurs throughout Oklahoma and will occasionally infest cattle.  This tick has been incriminated as a vector of anaplasmosis and thus is an important species.

The spinose ear tick is a one-host soft tick species that feeds deep in the external ear canal of cattle and many other mammals.  Larvae attack hosts in March and may feed 40 to 270 days before dropping from the host as an engorged nymph.  The adult of this tick does not feed and is rarely seen.

Tick control is achieved by vegetative management (the reduction of underbrush in some cases) and the use of various insecticides.  Most of the ear tags for horn fly control will control or prevent infestations of Gulf Coast ticks or spinose ear ticks, but the pyrethroid tags are the most effective.  In order to be most effective, tags should be placed in each ear by mid-March to prevent initial infestations.  Select ear tags based on label instructions for control of these ear ticks.  Ear tags will not control lone star ticks or any tick that feeds over the entire body.  For more information on ticks, refer to Fact Sheet VTMD-7001, “Common Ticks of Oklahoma and Tick-Borne Diseases.”