This fact sheet summarizes some of the basic processing steps in a typical softwood sawmill, including what occurs in the log yard, primary breakdown, secondary breakdown, sorting and planning.

The log yard is where raw material is stored prior to debarking and primary breakdown. During storage, logs may undergo biological deterioration from the attack of insects and fungus.

Staining fungi in particular are problematic because growth can occur when moisture content is just above the fiber saturation point of 28 to 30 percent and temperatures range from 60oF to 85oF. In general, staining fungi do not have a significant effect on the mechanical properties of wood other than discoloration, which is usually considered a defect. Therefore, it is important to have a short storage time, so that logs will not be deteriorated prior to conversion to lumber.

Many sawmills use sprinkler systems to maintain the moisture content of logs above the fiber saturation point. Storing logs in wet condition helps prevent end checking as a result of sudden moisture content reduction from the cross section. Two other options to protect the raw material in the log deck are a) keeping the logs in water and b) spraying them with chemicals, such as fungicides or insecticides.

Figure 1 shows a typical sprinkler system on a log deck. 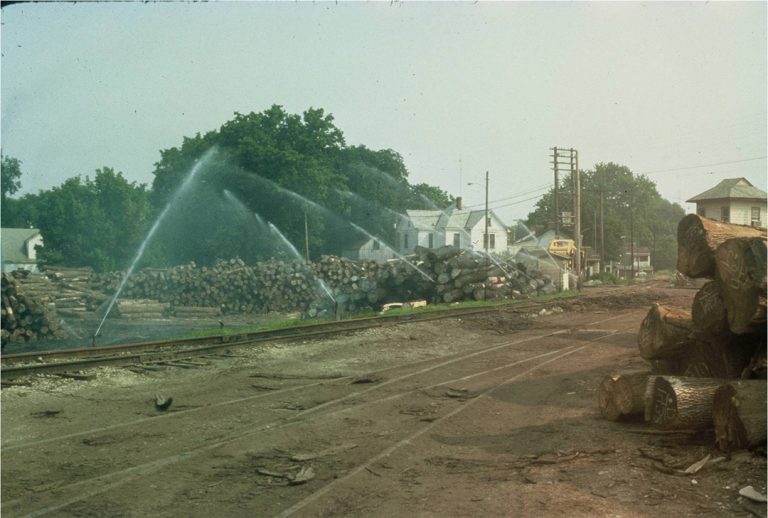 The purpose of debarking is to eliminate bark and any possible debris in the bark to have a better visualization of the log. The ideal debarker should be capable of debarking a wide range of species and sizes and operating under various conditions, such as green, dry or frozen logs. Although there are several types of debarkers, such as rosserhead, cambio, mechanical ring, water-jet and drum type, mechanical ring and cambio are the most widely used.

The mechanical ring debarker has six air-loaded cutting tool arms attached to a rotating ring providing a scraping action over the surface of the log so bark is sheared at the cambium layer. The cambio debarker is equipped with three rotating drums with abrasive surfaces. Logs pass through as the abrasive surface of each drum scrapes the bark. Improper use of any debarker, including the ring debarker, can result in the waste of wood fiber. Figures 2 and 3 illustrate these two commonly used debarkers. 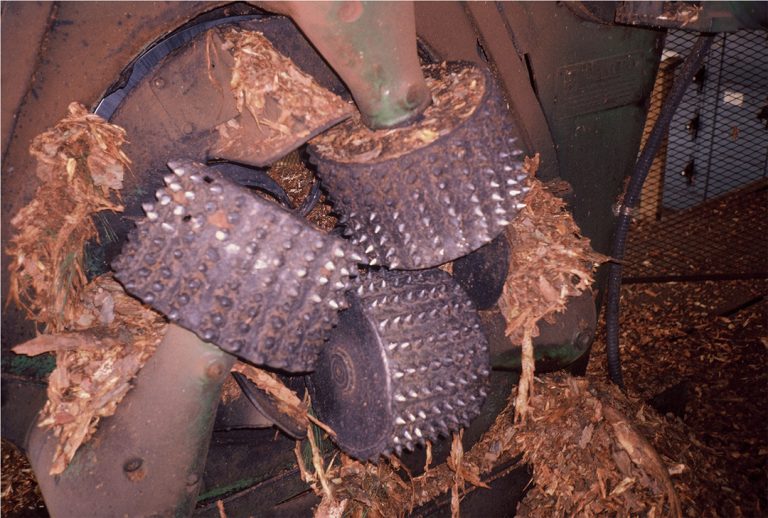 In the last 10 to 15 years, the majority of sawmills have made major technological modifications in both primary and secondary breakdown processes. Primary breakdown involves converting logs into lumber in a headrig. Edging wanes and reducing thickness of the lumber by resawing are some of the activities that take place during secondary breakdown.

A headrig is a machine center consisting of one or more cutting tools that influences overall productivity of the mill. In a typical headrig center, four main activities are carried out: 1) determining the geometry and grade of the log, 2) orienting the log into the correct position and fixing it there, 3) transporting the log while it is fixed and 4) cutting.

In the mid-1920s, only 40 to 45 percent of a log was converted into lumber. Advanced technology has improved overall yield value to 70 percent or more. Today, most sawmills operate advanced headrig centers using laser and camera scanning to get the maximum value from each log processed.

Laser scanners work by emitting a laser beam towards the log to be measured. Camera scanning collects visual data about the logs that can be interpreted by computers. Movement of the log at every step, including positioning, transporting and cutting, is followed and evaluated. These activities become more challenging when headrig operation is performed at a speed in excess of 500 ft/min with small logs. Figure 4 shows a headrig control room where primary breakdown takes place. 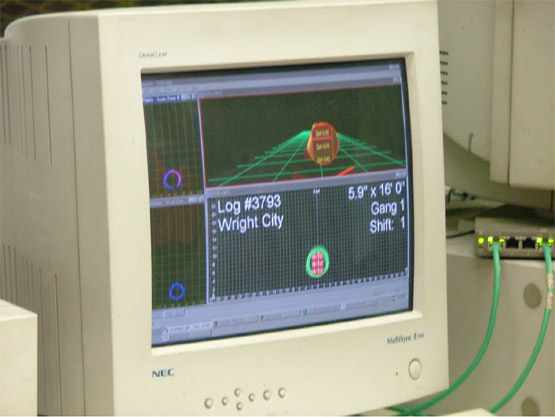 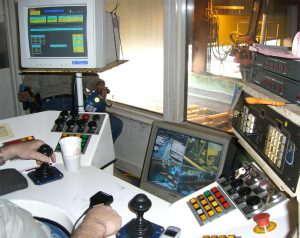 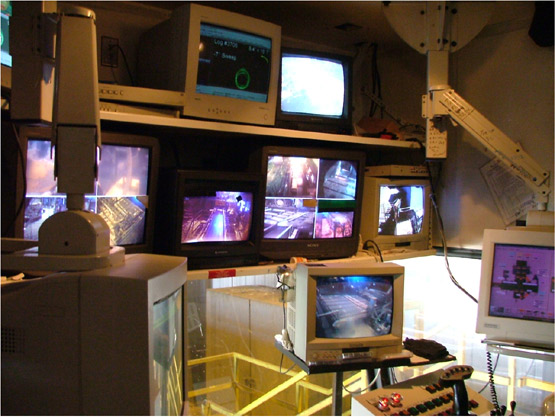 Bandsaws are the most widely used headrig in many mills. They are flexible, easy to use and relatively inexpensive as compared to curve sawing or chip-and-saw headrigs. Blade stability, which influences overall sawing accuracy, is determined by blade thickness, blade width, feeding force and distance between the guides. Figures 5 and 6 illustrate such parameters and a typical bandsaw with its carriage, respectively. 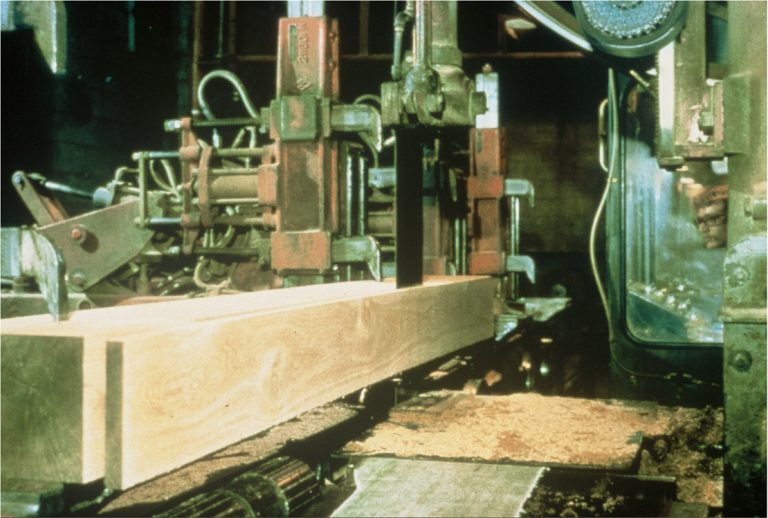 Figure 6.  Typical bandsaw with its carriage

One of the most important concepts in primary breakdown of the log is the best opening face (BOF). Overall productivity is determined by the first sawline resulting in maximum lumber yield. Many sawmills use computer programs to determine BOF during the primary breakdown.

When relatively straight logs are sawn, recovery will be high. However, overall yield is significantly reduced when logs have some degree of curvature since only the center board can be recovered. In such cases, curve sawing is an ideal application to improve the yield of low quality, curved logs.

In general, curve sawing produces straight lumber with less wane because the natural curve of the log is followed. The saws are stationary, and logs go through the saw on a curved path similar to the curvature of the log. The sweep of the log is determined by scanning the log. The scanned information is translated into a computer to pivot the arbor and shift the saw laterally against the incoming log. Curve sawing is extremely efficient for random length softwood mills and helps to achieve a high production level.

Multiply circular resaws are the most widely used secondary breakdown machine. In small sawmills, they are manually fed by an operator using laser lines for reference.

Depending on volume, uniformity of flow, thickness, width, length and grade, different equipment is used to sort the lumber. Greenchain, the hand pull sorting, is a classic method for sorting unseasoned lumber in small capacity mills. Lumber is sorted on a large, round rotating table and spread out on the ground.

Sling and bin sorters are two types of drop sorters that are ideal for mid-size and large capacity mills. When using drop sorters, lumber is conveyed on L-shaped metal bars and dropped into a bin or sling, depending on thickness, width and length. Sling sorters are less capital intensive than bin sorters.

A photocell system is used to determine which lumber should be dropped in which bin. Capacity of each bin also is monitored by a photocell, and each bin is lowered as it is filled. The operating cost of a bin sorter is lower than that of a sling sorter since there is no need to replace slings over time.

Once lumber is kiln dried, planing or surfacing is the next step. The main purpose of a planing center is to cut the lumber to a specified uniform thickness and width, as well as to evaluate grade, trim and then bundle the lumber for storage prior to shipping.

Planers are pieces of equipment used to dress and size rough lumber on one or more sides to a uniform geometry. Planers are similar to jointers except the cutterhead is located above or, in some cases, above and below the lumber. The cutterhead is located between two independently adjustable metal tables. Outfeed and infeed tables are adjusted to determine the depth of cut in a typical planer as shown in Figure 7.

Figure 7.  Depth of cut on an planer.

The number of knives in the head, head speed, rate of feed, thickness of cut and cutting angle are some of the parameters influencing the surface quality of the lumber in both planers and jointers. The cutting angle is the angle formed between the knife face and a line drawn from the cutting edge of the knife. In general, the cutting angle should range from 20 to 30 degrees in a typical jointer for most softwood species as illustrated in Figure 8.

Figure 8.  Cutting angle of the knives on a cutterhead of a jointer.

The principles summarized in this fact sheet are important elements influencing the overall efficiency of sawmill operation. Detailed information about these elements also can be found in the following literature.