Are You “Sweeping” Your Grain Bin Safely?

The Occupational Safety and Health Administration (OSHA) has been concerned about the safety surrounding sweep augers since 2009. The OSHA Grain Handling Standard 29 CFR 1910.272 was interpreted by OSHA to mean that an employee could not enter a grain bin while the sweep auger was engaged. About four years later, and after much discussion with industry, OSHA backed off its ruling to a certain extent. In a memorandum issued in May 2013, OSHA agreed that workers could be allowed into a bin with the sweep auger engaged if certain conditions were met. These conditions are listed below. The OSHA standards listed in this fact sheet are available at the www.osha.gov website by searching for the number of the standard.

While not all farms are under the jurisdiction of OSHA, the same safety guidelines are good “best practices” to follow to keep workers and family members safe while working around grain bins. If a farm bin has a sweep auger, efforts to meet the conditions below will certainly help to provide a safer working environment and could potentially save a life or a limb from entanglement.

These 10 steps are required by OSHA and go a long way in keeping workers safe when entering and working around grain bins.

2. The grain entry points and the subfloor auger must be de-energized and locked out/tagged out before anyone enters the bin. Figure 1 demonstrates locking out/tagging out of an energy source. 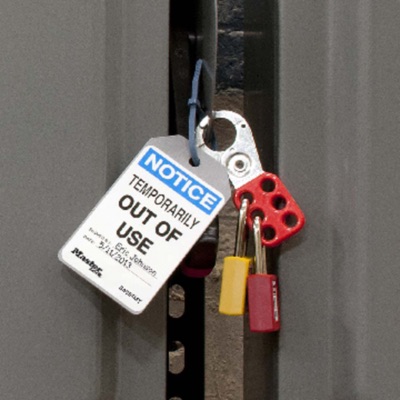 3. Grates/guards must be in place and SECURED on the subfloor auger sumps before the sweep auger is operated. The grates must be secured against all forces that could act on the guard in such a way that it might be displaced. Figures 2 and 3 show an unguarded sump opening and the same sump opening with a guard imposed on the figure. The unguarded sump opening is a safety hazard because workers could step into the sump. Many limbs have been lost and deaths have occurred in unguarded sump openings with the subfloor auger in operation. Figure 4 shows a guard in place but not properly secured. Figure 5 shows a guard that can be securely attached. The space between the bars on the grates is determined by the distance between the bin floor and the auger flights or paddles (Figure 6). 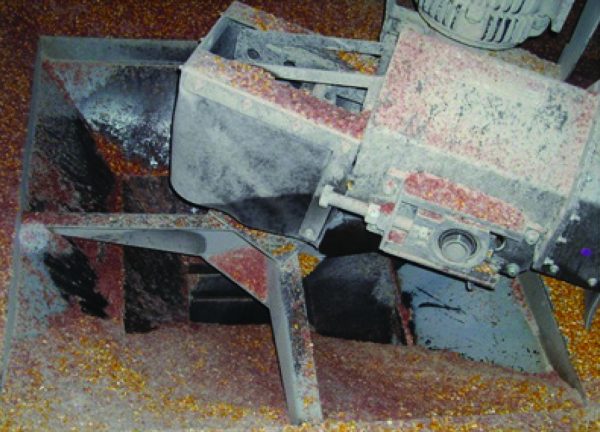 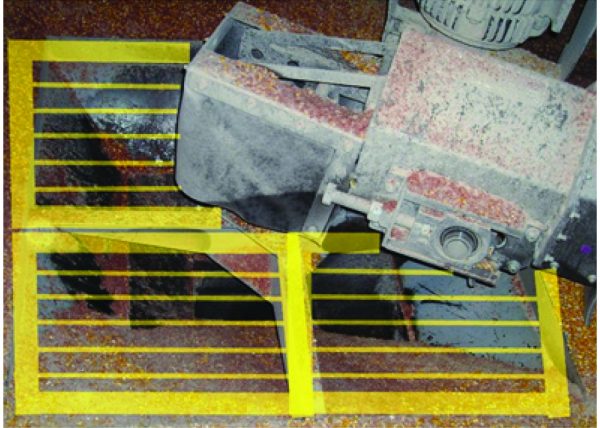 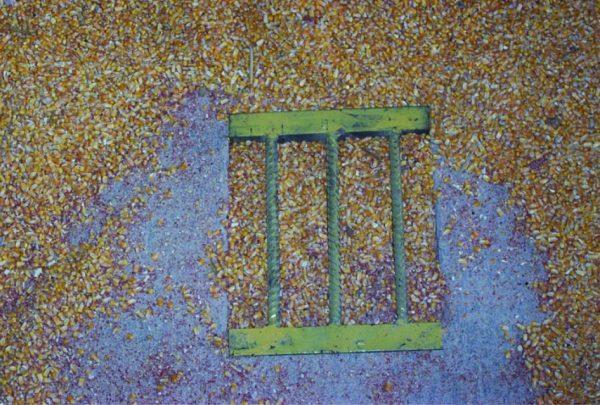 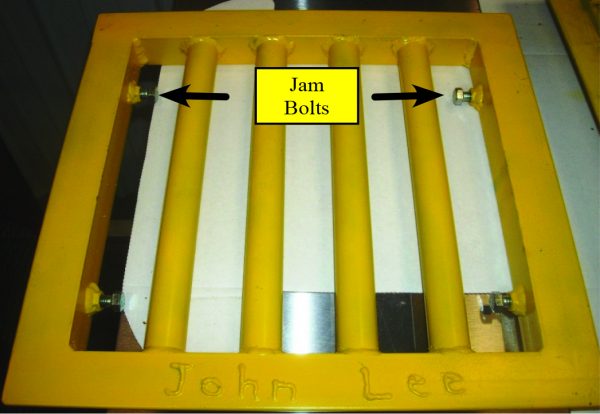 4. Walking on the grain where the depth of the grain presents an engulfment hazard is forbidden. 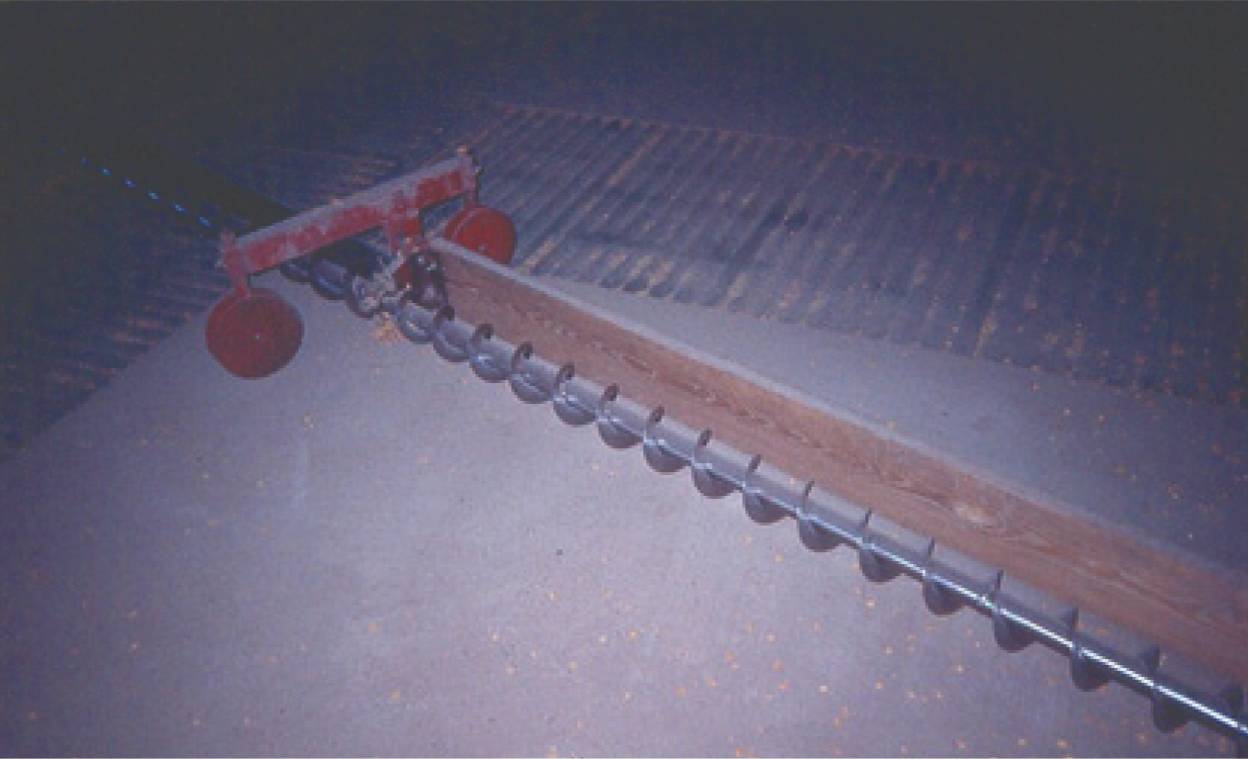 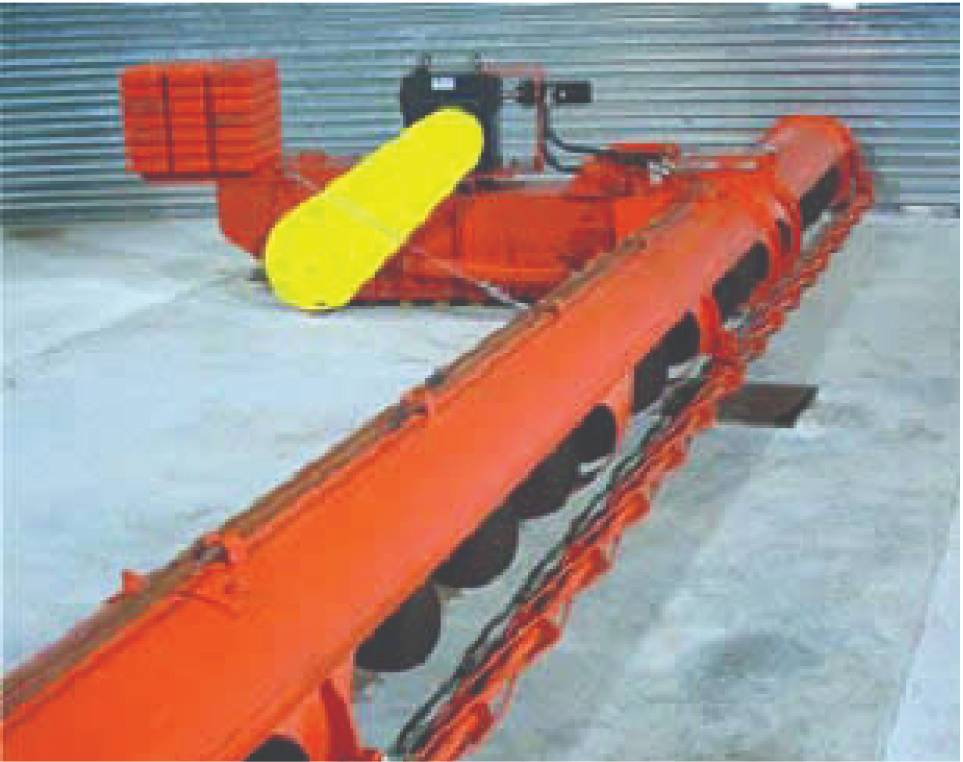 6.  An observer must be positioned outside the storage structure and have contact with the person working in the bin either through sight, radio or voice. This observer must be trained in emergency procedures and rescue, and know who to contact in case of an emergency.

7.  When the sweep auger is energized, a worker may enter the bin if grates are secured over the sumps (see step 3) and the worker must use engineering controls within the bin to prevent the worker from coming in contact with the operating sweep auger.

These engineering controls may include:

a. Sweep auger equipped with an attached guard preventing contact with the worker on the unguarded portion of the auger (29CFR1910 Subpart O, machinery and machine guarding).
b. Sweep auger equipped with a dead man switch or similar device that allows operation only when the operator is in contact with the device (Figures 9 and 10). The worker must be positioned at least seven feet from the energized auger at all times. 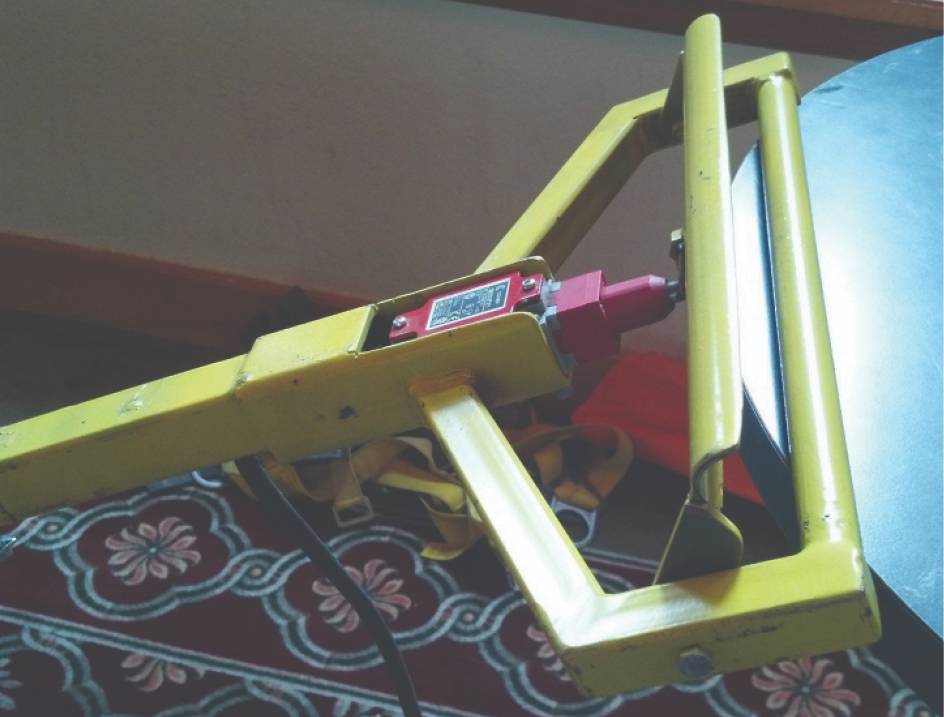 Figure 9. Sweep auger “dead man” handle that energizes the sweep auger only when the worker grips the handle. 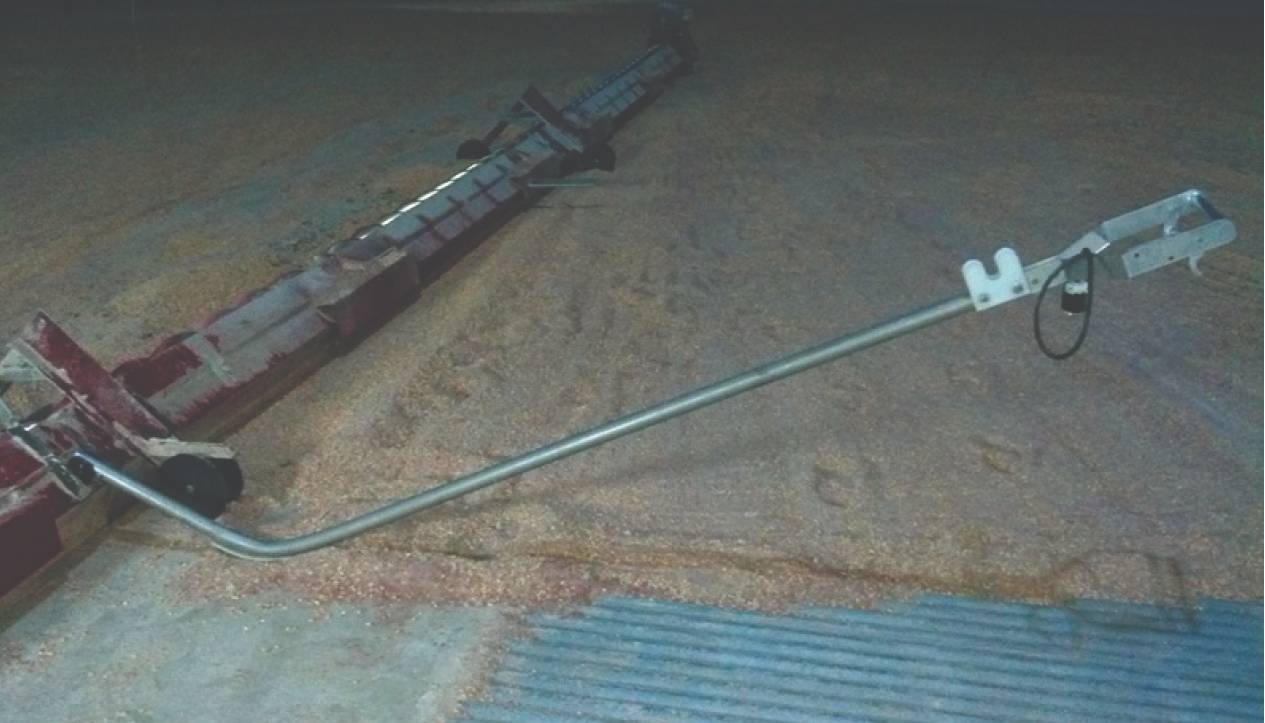 c. Workers in the bin other than the person operating the sweep auger must also be protected in such a manner that they are kept out of the danger zone of the auger. This may be achieved by catwalks or guardrails. All devices should meet 29CFR1910 Subpart O (Figures 11 and 12). 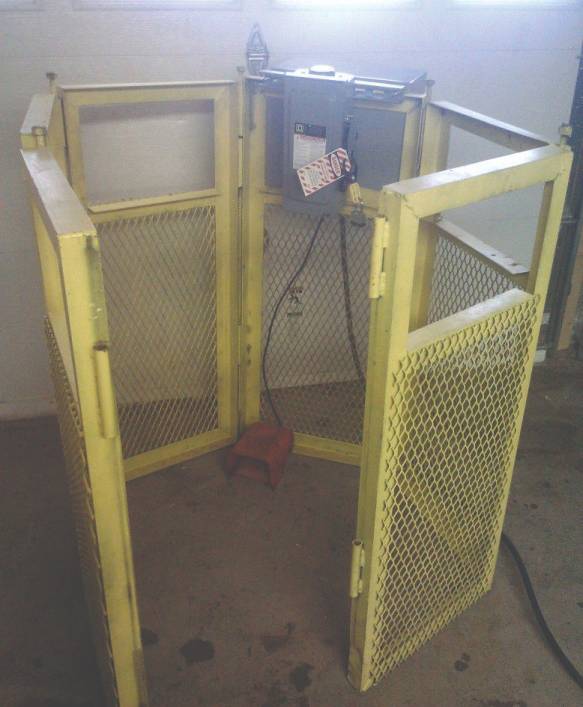 9.    Workers may not use their hands, legs or similar methods to directly manipulate (dislodge) the sweep auger while it is energized (Figures 14 and 15). 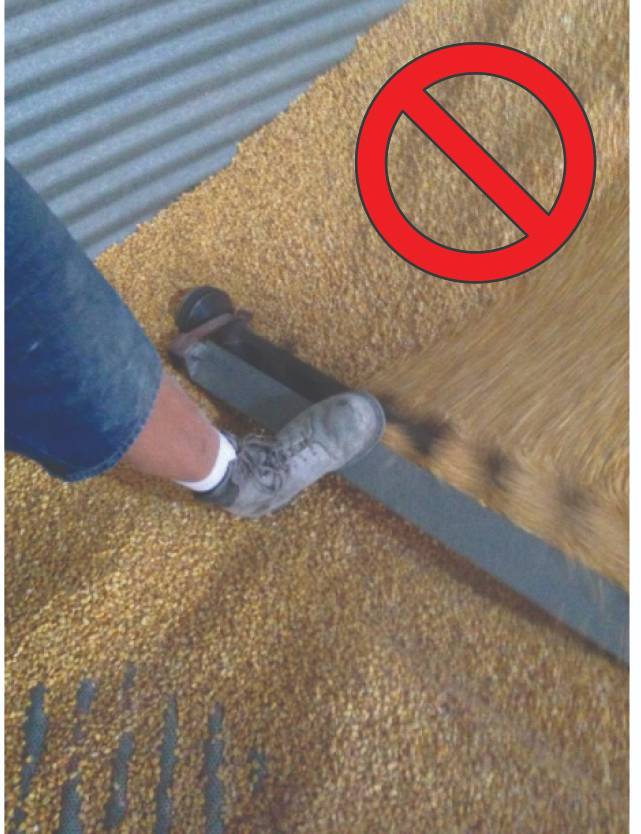 Figure 14. Unsafe handling of a sweep auger with foot. 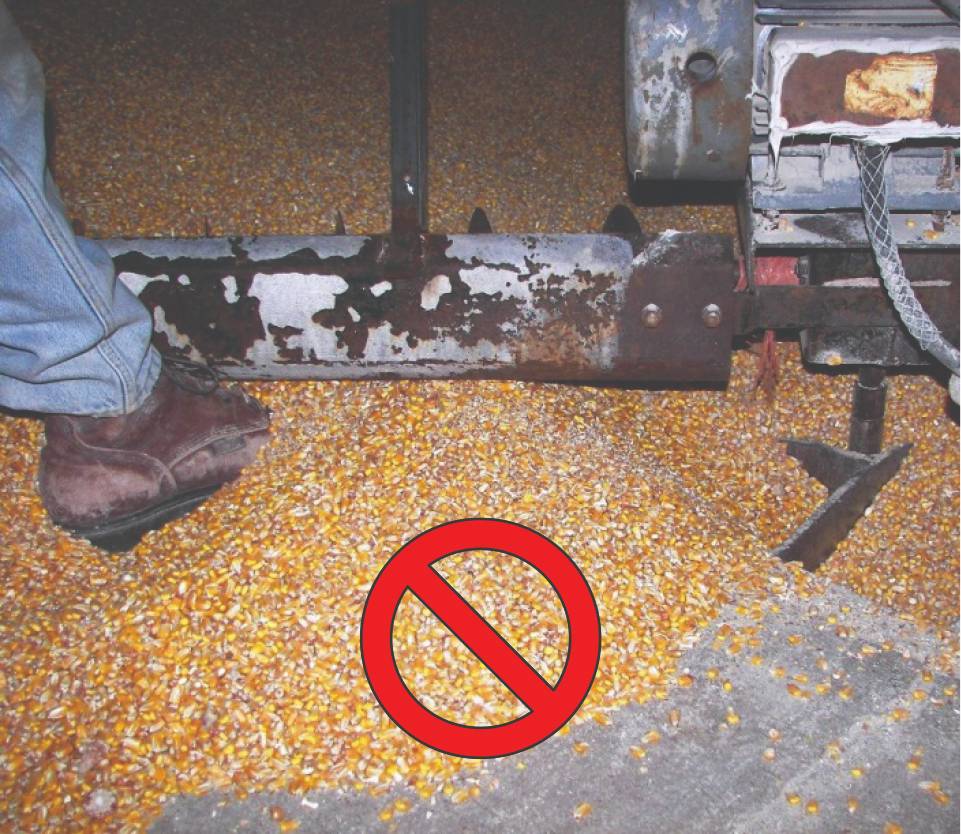 Figure 15. Moving grain around the sweep auger with a foot is an unsafe practice.

10.  The sweep auger must be de-energized and unplugged during maintenance and adjustments. The person doing the maintenance must maintain control of the lock out/tag out equipment or the plug (see Figure 1).

Clearly, the safest place to be when unloading or working around a grain bin is outside the bin. If workers do not need to enter the bin to dislodge out-of-condition grain clumps and bridges, entrapment and engulfment do not occur. There are two factors that help to keep workers out of bins: keeping grain in good condition, so clumping and bridging do not occur and using zero-entry sweep augers. In the past decade, bin sweep manufacturers have made great advances in sweep design. Zero-entry sweep augers are controlled from outside of the bin and are robust enough to handle out-of-condition grain without help from workers entering the bin.

When purchasing a zero-entry sweep auger, consideration for the types of grain and how often the bin is swept is important. Different types of grain and higher moisture content grain require greater horsepower and larger clearances. Emptying bins completely to the floor more frequently makes it easier for bin sweeps to move the remaining product to the sump openings. Upgrading an existing sweep auger to “zero-entry” is something to consider in some situations. Be sure to work with a reputable dealer of zero-entry bin sweeps when making the decision to retrofit existing equipment or purchase new equipment. If a current sweep auger requires a cord to be run into the bin for power, the sweep is not a good candidate for zero-entry retrofitting. A person must enter the bin to plug the cord into the sweep or retrieve the cord to plug in to power outside of the bin, thus “zero-entry” is not possible.

Commercial grain facilities and facilities that must meet OSHA standards should have a sweep auger use and maintenance policy. The National Grain and Feed Association has produced an excellent resource that gives an example of just such a policy. This information may be accessed at: Guidance for Sweep Auger Operations in Grain Bins

The policy is based on the 10 steps reported in this fact sheet. It also provides definitions of terms used in the OSHA policy as well as in the 10 steps. Training is addressed along with safety steps, preparation for sweep-cleaning operations and disciplinary action for employees not willing to follow the requirements set forth in the operating guidelines.

With planning, training and coordination, the risks that are inherent in working inside grain bins can be reduced. Equipping with safety features and having management policies in place certainly help workers stay safe. Grain bin sweeps are an important part of the unloading process of grain bins. Guidelines for safe working conditions are in place and must be followed. When the 10 steps listed above are followed, incidents involving injury and death are greatly reduced, and in most cases, eliminated. When these methods become habit in a facility, the safety culture of the facility is greatly reinforced.

References and other information sources

Facts and pointers for getting a good, uniform and precise application of poultry litter using spreader trucks.