Producing methane from manure is fairly straightforward.  Seal manure in an airtight container and it forms biogas: a mixture of methane (CH4), carbon dioxide (CO2), and trace amounts of other gases.  The process is so automatic, before Pasteur, anaerobic digestion was considered a prime example of spontaneous generation. The organisms producing biogas were believed to spawn directly from manure.  Now that the germ theory is widely accepted, we know it takes two elements to start biogas production: organic matter and a seed community of microorganisms.  Fortunately manure contains both.  Fresh manure is 80 percent to 90 percent organic matter, and most domestic animals continuously excrete live cultures of biogas producing organisms from their colons.

Anaerobic Digestion is the Work of Microbial Communities

Behind anaerobic digestion’s apparent simplicity are complicated interactions involving several microbial communities.  Each community completes a separate step in digestion.  Each community produces its own waste, and the waste of one is the food of another. 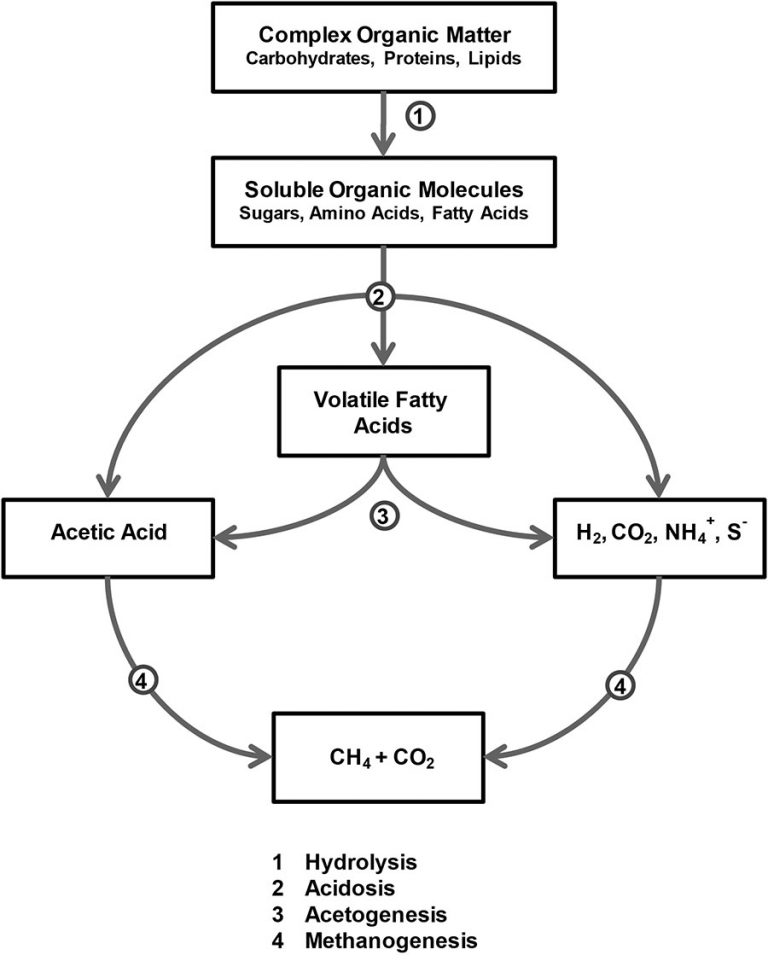 Methanogens are methane forming microorganisms belonging to the Archaea domain — very simple, single cell organisms similar to bacteria. Methanogens take the end products of fermentation – volatile fatty acids, hydrogen gas (H2), CO2, and water (H2O) – and use them to form methane. Methanogens fall into two camps depending on the pathway they use to produce methane (Figure 2). All methanogens reduce CO2 and H2 into CH4 and H2O. Those that use this pathway exclusively are called hydrotropic methanogens. Methanogens that cleave acetic acid to CH4 and CO2 are called acetotrophic methanogens.

Given a limited food supply and no restriction on growth, all biological communities, whether microbial or human, follow the predictable pattern of growth and decline shown in Figure 3.

Many anaerobic organisms, including methanogens, have the ability to go dormant during periods of food shortage.  The two coping mechanisms are spore formation and a kind of suspended animation. Dormancy begins during the stationary phase.   This dormancy of anaerobic microorganism means an anaerobic digester can be easily restarted after long periods of inactivity. 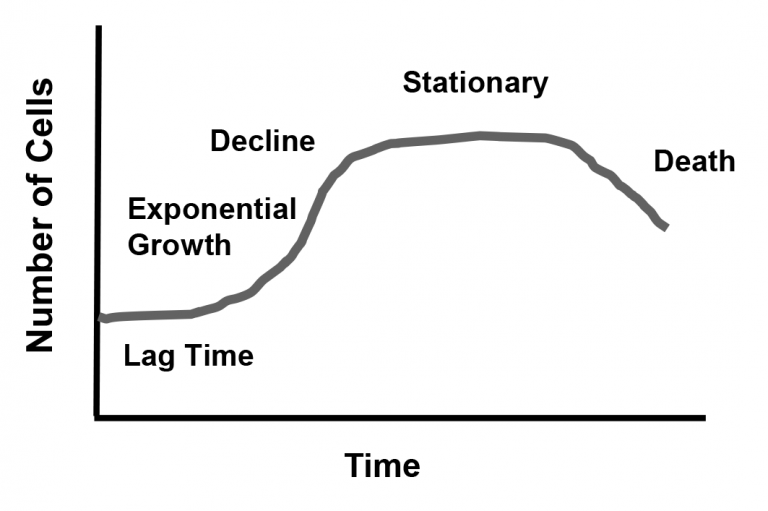 An important concept to grasp is the doubling rate or the reproduction time of an organism. This is the time needed for a population to double in size during exponential growth. In other words, it is the time required for the community to replace itself.   Anaerobic digesters are biological reactors.  They are designed to keep microbial communities in exponential growth.  Three control parameters: Hydraulic Retention Time (HRT), Solids Retention Time (SRT), and Organic Loading Rate (OLR) are used to make sure individual organisms remain in the reactor longer than their reproduction time. 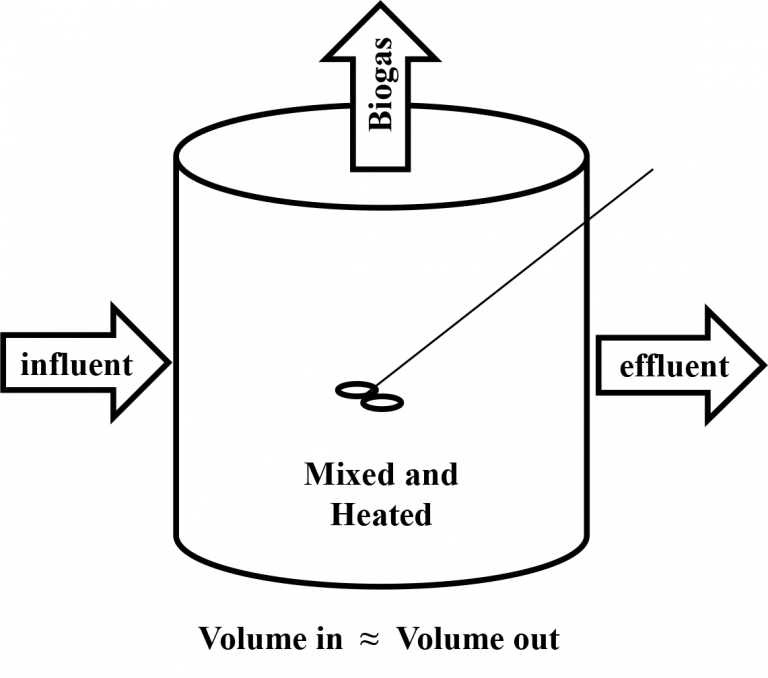 “The higher the OLR of a digester, the higher the biogas production” is true up to a point. It is possible to overfeed a digester.  One community may process food faster than the next one can remove its waste.  The presence of waste products in the digester may inhibit the growth of a microbial community.   It is also best to keep OLR fairly constant.   Sudden increases in feeding can cause bursts of gas production, which leads to foaming and scum formation in the digester.

Methanogens thrive in two temperature ranges:  thermophilic and mesophilic.  Thermophilic (heat loving) methanogens are fast growing (reproduction time 10 to 15 days), but they operate in a fairly narrow band of temperature centered on 55 C.   Mesophilic methanogens are slower growing (reproduction time up to 30 days), but they tolerate a wider range of temperatures.  35 C is optimal for mesophyllic methanogens, but they can tolerate much lower temperatures.  Provided they have sufficiently long SRT, digesters operated at 20 C do not show substantial loses in gas production when compared to those operated at 35 C.

The optimum pH range for anaerobic digestion is neutral to slightly basic (pH 6.6 to 7.6).  The ability of a reactor to resist changes in pH is called alkalinity.  A complex set of naturally occurring buffers control pH within anaerobic digesters, with organic acid-ammonia and carbonate-bicarbonate being the most important buffers.

Identification and control of inhibitory substances is the subject of another Fact Sheet in this series, BAE 1763, Anaerobic Digestion of Animal Manures: Inhibitory and Toxic Materials.  The most common on-farm materials that inhibit methane formation are antibiotics, cleaners, sanitizers, disinfectants, ammonia, sulfate and sulfide, heavy metals and salt.

Fermentative bacteria are generally more robust and faster growing than methanogens. The first indication that something is wrong with a digester occurs when the acid formers start to overpower the methane formers. The volatile fatty acid concentration of the reactor liquid increases, reactor pH drops, methane concentration in biogas decreases, and eventually biogas production declines.   Upset conditions are monitored by measuring pH and the ratio between volatile fatty acid concentration and bicarbonate alkalinity.  The relationship between fermentative and methanogenic communities can become so unbalanced that even the acid formers can no longer tolerate the low pH.  At this point we say the digester is “stuck,” has “soured” or it has “pickled.”  Basic steps to follow for digester upset are:

Anaerobic digestion is a naturally occurring and nearly spontaneous process.  Digesters have the undeserved reputation of being finicky and easy to upset.  By gaining a basic understanding of the biology going on in the digester and following a few simple steps to correct upset conditions, a digester can steadily produce biogas for years on end without special treatment.

Darling, D.  2009.  The Internet Encyclopedia of Science. www.daviddarling.info/encyclopedia.html. Accessed  May 16, 2009