Livestock producers interested in generating energy from manure need to know the potential amount of biogas their manure will produce. They may also want to know if another material can be added to manure to produce more biogas from the digester. Almost all organic matter (OM) can be converted to biogas through anaerobic digestion; however, some materials produce more methane than others. This fact sheet describes how three measurements: Volatile Solids (VS), Oxygen Demand (OD), and Biochemical Methane Potential (BMP) are used narrow the range of methane producing materials from potential, to possible, to probable.

Volatile Solids analysis determines the total amount of OM in a substrate. It is a simple, inexpensive procedure and is a definitive measure of OM on a mass basis. Unless a substrate contains more than 60 percent or 70 percent VS on a dry mass basis, it is probably best to look for another candidate for digestion. The non-volatile solids, or ash content, of a substrate takes up valuable digester volume and will not contribute to biogas production.

Just how much methane can one expect per unit of OD?

Let’s go back to the definition of oxygen demand. Organic matter content of a pollutant is measured indirectly by observing the amount of oxygen needed to digest it aerobically:

The mass of O2 required to convert OM to CO2 and H2O is the oxygen demand of the OM. Equation 1 also shows that the energy released during aerobic digestion is directly proportional to oxygen demand.

Anaerobic digestion takes place in the absence of O2:

But, we can still use OD to determine the energy potential of the OM. Energy, and therefore, OD, on right hand side of Equation 2 must equal the OD on the left hand side of the equation. Most of the energy produced in anaerobic digestion is stored as CH4. Since methane (CH4) is flammable, it definitely has an oxygen demand:

We can use chemistry to calculate the unit mass for each constituent in methane combustion (Equation 3). Unit masses must balance on both sides of Equation 3. Putting numbers to the equation:

We can take this one step further. Under normal conditions (1 atmosphere pressure and 20 C) 0.25 grams of CH4 take up a volume of 370 ml. Rounding up, we can say a gram of substrate OD removed produces about 400 ml of methane, give or take, depending on reactor temperature. Putting it another way:

The volume of methane produced per mass of oxygen demand removed is sometimes called the Ultimate Methane Yield.

Methane yield is not the same as biogas yield. Biogas produced from manure is a mixture of methane, carbon dioxide, water vapor, and a few other gases, notably H2 and H2S. The total volume of biogas released per kg of OD removed will be greater than the 0.40 m3 of CH24. However, you can still use Equation 5 to determine the potential power released through anaerobic digestion, since most of the energy contained in biogas is CH4.

Also, note that Equation 5 predicts the volume of CH4 released per mass of oxygen demand removed. Not all the oxygen demand contained in OM is removed during digestion, and the digestibility of every material is a little different. Never the less, comparing oxygen demand of two materials allows us to compare the potential for those materials to produce biogas.

Chemical Oxygen Demand (COD) is generally used to determine OD for anaerobic digestion. It is a simple test to run, and it measures OM in the absence of oxygen. There are a few short comings, however. A digestion substrate will have a COD even if the chemicals in the sample are toxic or indigestible to microorganisms. Also, the amount of oxidant consumed in the COD test is related to the time of digestion. If the analyst does not dilute the sample sufficiently, or the test is stopped before all the oxidant is consumed, oxygen demand will be underestimated. The COD test is a particularly tricky analysis to run with solid substrates. Modern COD procedures use a very small sample size. Most agricultural materials are fairly non-homogeneous, that is, they can be a mish mash of different materials. If the tiny piece of a manure pile you placed in the COD tester is different than the rest of the pile, results can be way off.

Oxygen demand tells us the maximum amount of methane we can expect from OM. This is a start, but does not tell the whole story. We need to know how much of the OM microbes can actually convert to biogas.

Despite its complicated sounding name, the Biochemical Methane Potential Analysis, or BMP for short, is a relatively simple procedure: a sample of substrate is seeded with anaerobic microorganisms, mixed with a nutrient medium, and incubated for 30 to 40 days. Volume of CH4 produced during the incubation period is measured.

Incubation temperature of a BMP test is usually 35oC (i.e., the optimum temperature for mesophyllic organisms). Other temperatures can be used depending on operating temperature of the proposed digester. Total analysis size is usually 200 ml, with a variable substrate VS to seed VS mass ratio (1:1 to 2:1) based on individual substrate characteristics. Substrate VS to seed VS ratio is the same when testing both solid and liquid substrates. An appropriate amount of distilled water is added to bring total volume of the solids sample up to the same level of liquid samples. Due to the high variability expected when dealing with a living system, each sample is prepared in triplicate. Seed organisms are cultured in a dedicated reactor, and the same seed is used for each batch of substrate. Because OM contained in the seed may also produce CH4, triplicate samples of seed and the nutrient medium are incubated along with the substrate samples. Average volume of CH4 produced from the incubated seed is subtracted from the average CH4 produced by substrate samples prior to calculating results.

All three curves of Figure 1 show that the majority of CH4 was released during the first 15 or 20 days of the test. This should not be used to estimate the rate of biogas release, nor the optimum holding time for a reactor. Remember, a small amount of substrate is fed to lots of hungry, healthy microbes under ideal conditions. The first burst of gas occurs as easily digestible material is removed. Gas production slows down as the remaining, harder to digest material is removed. The curves in Figure 1 do tell us something about the nature of the substrates tested, however. Cellulose fibers are pure polymeric sugars and highly digestible. Their high energy content results in a higher specific methane yield than either peanut hulls or sewage sludge. The digested sewage sludge produced very little methane compared to peanut hulls. Peanut hulls are a raw, intact natural product. Sludge is solids settled from treated sewage – sewage that could have once been peanut hulls before the microbes in a sewage treatment plant removed much of their easily digested OM. Generally speaking, the further along in a treatment process you go, the lower the COD and BMP of the treated material will be. 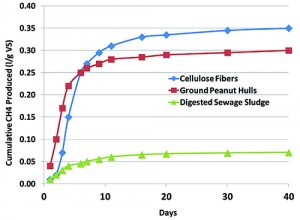 Table 1 lists Percent COD Converted to Methane, Specific Methane Yield and Wet Mass Methane Production Potential of a number of substrates tested at the Iowa State University Agricultural Waste Management Laboratory. This is not a definitive list of all potential manures and co-digestion substrates, nor are the values given in the table expected to completely represent the substrate. The table is merely a snapshot of many samples tested at Iowa State. Solids and OM characteristics (TS, VS, and COD) of the materials are also given. Total Solids are given on a wet weight basis (wb) — the percentage of the original sample that is not water. Volatile Solids are given on a dry weight basis (db), or the percentage of TS that is organic. COD:VS is the ratio between Chemical Oxygen Demand and VS. Higher COD:VS ratios indicate organic matter that requires more oxygen to decompose that those with lower ratios.

Percent COD Converted to CH4: This value is calculated by converting the CH434 produced equals 1 kg COD removed), and dividing by initial COD of the sample. This gives an estimate of the amount of organic matter that will be converted to CH4 during digestion. Table 1 has some pretty strange results. How can some of the substrates, such as alfalfa silage, have removal fractions greater than 100 percent? This is an artifact of the inherent variability of the BMP and COD tests, and non-homogeneity of substrate samples received by the lab. What the numbers given in Table 1 tell us is the OM in alfalfa silage is likely to be highly digestible (110 percent of COD converted); the wood shavings’ OM (33 percent of COD converted) – not so much.

Specific Methane Yield: Values given in Table 1 show the wide range of CH4 production expected from different substrates. If you look carefully at the specific methane yield results compared to physical and chemical characteristics in the table, you will see that there is a trend. Generally speaking, substrates with OM that is high in energy (high COD:VS), and highly digestible (high percent COD converted) also have high specific methane yields. We might have eliminated Corn Processing Byproduct as a co-digestion product because of its high ash content (only 54 percent VS), but the 54 percent OM that corn processing byproduct contains is highly energetic (3.0 COD:VS), and highly digestible (84 percent COD converted). The resulting specific methane yield (0.26 liters CH24/g VS) is on par with potato peels (0.27 liters CH4/g VS). Potato peel contains much more digestible, but lower, energy OM (100 percent COD converted, 0.64 COD:VS) than corn processing byproduct. These results also tell us something about where to remove substrates from a manure handling system in order to capture the most energy. Compare beef manure removed from outdoor pens to beef manure removed from covered pens (first two lines of Table 1). Both samples have identical VS content, and similar COD:VS ratios. The fraction of COD converted from outdoor pens was roughly 74 percent that of the covered pens, and the specific methane yield was, likewise, 84 percent that of the covered pens. We don’t know how long these two samples lay in the pens, but it appears that the action of wetting and drying of the manure, along with exposure to sunlight, caused some breakdown of manure in the outdoor pens before the samples arrived at the lab. 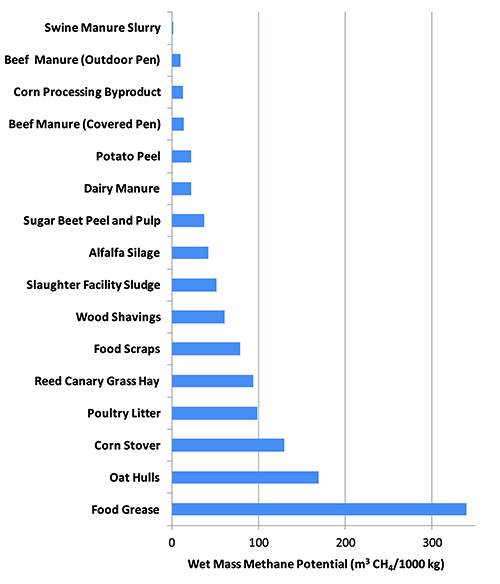 It is easy to get carried away with Figure 2. It cannot be over emphasized that BMP analysis indicates the potential of substrates to produce methane under perfect laboratory conditions. It does not say how the substrate will behave in an actual digester. A co-digestion product may be toxic in higher doses than the small amount used in the BMP test.

If VS, COD, and BMP analyses reveal that a substrate is a good co-digestion product, then it is wise to determine maximum feeding rate of the material using an Anaerobic Toxicity Assay. Also, it is a good idea to pilot test – simulate the digester using a smaller reactor – before making any major changes to a digestion system.