Alfalfa Weevil and Its Management in Oklahoma

The alfalfa weevil, Hypera postica (Gyllenhal), has caused serious damage in Oklahoma since 1972. Before 1980, the highest population densities for the alfalfa weevil were recorded during the years 1972-74. From 1975 to 1978, weevil numbers gradually declined. Since 1980, however, a resurgence of alfalfa weevil has occurred across Oklahoma. In 1986, infestations developed in late February and larval numbers were higher than ever before.

The adult alfalfa weevil is a snout beetle approximately 3/16 inches in length. Its thorax and abdomen are brown in color and a prominent, darker brown to black stripe extends down the middle of the back (Figure 1).

As weather conditions warm in the spring (February-April), eggs hatch and larval feeding begins (Figure 2). Initially, small larvae (1-2 mm) feed within the plant terminals. Larvae complete four instars (growth phases) and increase their size with each molt. Large larvae (5-6 mm) often feed in more exposed locations on plant leaves and can be recognized by their light-green coloration with a dark brown to black head capsule and a white band along the middle of the back (Figure 3).

The time period when larval populations exceed the economic threshold varies considerably from year to year (Figure 4). According to degree-days for development, occurrence of peak larval numbers is fairly consistent with accumulation from January 1 of approximately 500 degree days in northern Oklahoma (Payne Co., OK) and 700 degree days in the south (Stephens Co., OK). Peak larval densities generally occur when alfalfa is 12-15 inches tall and most larvae complete development and pupate before first harvest. Therefore, feeding by larvae is seldom observed in the second crop. Pupation begins from mid-March to mid-April and is about 2 weeks earlier in southern Oklahoma than in the north. Pupation occurs on or near the soil surface inside a fine-mesh, round cocoon that is white in color. Approximately 10 days after the onset of pupation, adult weevils will emerge. These adults may feed on the foliage for short periods of time, usually on regrowth after first harvest. Occasionally, damage by adults requires spraying of second growth. Adults leave fields and remain inactive through the summer and return in the fall to begin feeding and laying eggs. 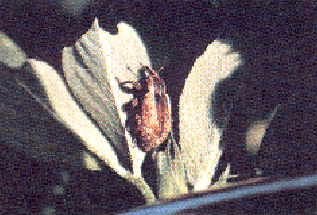 Figure 2. A portion of the annual life cycle of the alfalfa weevil in Oklahoma. 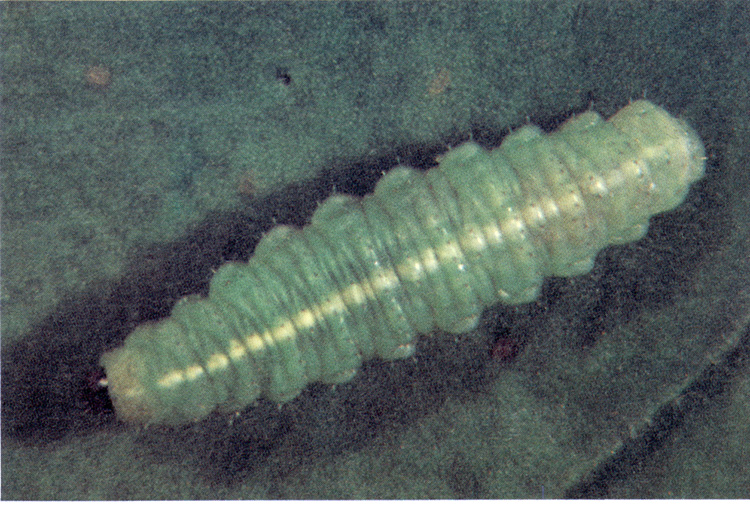 The primary damage by this pest is defoliation due to feeding by larvae. In addition, factors such as reduced growth and delayed maturity of damaged alfalfa in the first crop may result, along with reduced vigor and productivity of the second crop as a residual effect.

Trials conducted in South Central Oklahoma have shown that yield of forage in the first crop of alfalfa is decreased about 170 Ib./acre for each addition of one larva/stem in a weevil population on alfalfa up to 12 inches to15 inches tall (Figure 5). Because of reduced plant growth and lower stem densities, yield/losses of second harvest alfalfa may approximate 140 Ib./acre for each addition of one larva/stem.

Based on current prices for alfalfa hay, populations of 1.5-2.0 larvae/stem represent the point at which losses due to alfalfa weevil larvae in Oklahoma exceed the cost of control. This population level represents 40 or more larvae per square foot. If a producer checks fields regularly and makes insecticide applications when populations reach the above levels, damage that would have resulted from larvae completing their development can be prevented.

The decision to treat for alfalfa weevils in an integrated control program involves several factors. These factors include weevil numbers, alfalfa height, and larval developmental stage. The latter factor is based on temperatures accumulated after egg deposition. The amount of warm weather required for completion of weevil development is measured in units called day degrees. Scouting procedures used in Oklahoma are based on day degrees and, thus are related closely to weevil development. The variability in occurrence of damaging larval populations makes it necessary for careful observation of fields throughout the growth of the first crop. Procedures for recording and compiling day degree totals for individual producers are provided in OSU Current Report CR-7177.

An integrated control program for the alfalfa weevil involves utilization of several management techniques. These techniques include biological, cultural, and chemical control practices.

The capability of tolerant varieties to withstand feeding by weevils is usually insufficient to eliminate the need for chemical control. Several tolerant varieties have shown good yield potential for Oklahoma farmers. Also, these varieties provide resistance to Phytophthora root rot and spotted alfalfa aphids. However, considering the pest pressure in Oklahoma alfalfa and currently available varieties, chemical insecticides will continue to be an important means of weevil control.

Weevil larvae hatching from eggs laid during the winter months contribute greatly to early season damage. One cultural control practice that reduces egg numbers and subsequent larval damage is winter grazing of alfalfa by cattle. This practice will effectively reduce weevil damage if utilized correctly. To ensure the greatest benefit from grazing alfalfa, several factors should be considered. First, grazing should be initiated after freezing weather has browned the foliage, and should cease before spring growth begins. Second, alfalfa should be grazed quickly (2-3 weeks) when soil is dry or frozen. Prolonged grazing or grazing under wet conditions can damage plants and increase disease in stands. Cleanly grazed fields may have 50-70 percent fewer eggs than those left ungrazed.

The parasite Bathyplectes curculionis is well established in all major alfalfa growing areas of Oklahoma. High rates of parasitism (80 to 90 percent) were common from 1977-82 on first cuttings. Since this period, several factors have reduced the occurrence of B. curculionis in Oklahoma. Among these factors are two species of hyperparasites (secondary parasites) that destroy B. curculionis larvae in their cocoons.

A second control agent found for the first time in Oklahoma in 1983, is a fungal disease of weevils. During April this disease often kills large numbers of larvae when wet weather occurs. If conditions remain dry, as was the case during 1987, the disease does not develop. The usual timing of fungal outbreaks is too late to prevent serious damage to alfalfa; however, the disease may be valuable in eliminating larvae that remain near the time of first harvest.

In Oklahoma, insecticides have provided the major avenue of control for alfalfa weevil since the early 1970s. As indicated in Figure 4, throughout March (occasionally February) to May, weevil larvae may cause serious damage, even when tolerant varieties and cultural control practices are utilized. When used as part of an integrated program, insecticides have provided a reliable and inexpensive means of controlling alfalfa weevil populations.

To achieve the best results with insecticides for alfalfa weevil control, several guidelines should be followed. First, follow OSU sampling and treatment recommendations. Second, apply all insecticides only when environmental conditions are favorable for good control. Temperatures should exceed 50°F and wind velocity should be less than 8 mph to 10 mph. Third, sprayers should be properly calibrated and spray drift into non-target areas should be avoided. Finally, adequate spray gallonage should be used to insure thorough coverage of foliage. Ground application should involve 10 gallons/acre to 20 gallons/acre. The higher rate should be applied to larger plants or denser stands. Aerial application of insecticides should involve 2 gallons/acre, 3 gallons in heavy foliage. Use of higher spray volumes in aerial application have resulted in more effective control (Table 1). Increases in spray volume improve penetration of foliage resulting in greater contact with weevil larvae by insecticides.

A list of currently available insecticides for weevil control are available in OSU Fact Sheet EPP-7150, Alfalfa Forage Insect Control. Rates and residual effects will vary depending on environmental conditions and crop maturity. Likewise, waiting periods before harvest will change for some materials depending on rate of application. Those insecticides listed as “restricted use” should be used by certified applicators only.

a  time interval after application

Management of the alfalfa weevil in Oklahoma should involve integration of four control strategies. Winter grazing, use of tolerant alfalfa varieties, and preservation of biological control agents contribute to reducing alfalfa weevil populations and subsequent control costs. In addition, chemical control can be safely and efficiently used in an integrated program when regular scouting indicates the need for it.

The growth and popularity of alfalfa as a high quality forage is expected to continue across the country. In addition, prospective markets in Texas and Southeastern U.S. may determine the extent of expanded alfalfa acreage in Oklahoma. Producers that utilize all the factors presented here along with available management programs will maintain high forage yields and stand longevity and ultimately reduce production costs.