In Oklahoma, damaging populations of aphids can occur in alfalfa nearly any time of the year; however, infestations are most common during March and April as the first crop is growing. Two of the three key aphid pests in alfalfa, the pea aphid (Acyrthosiphon pisum) and the blue alfalfa aphid (A.kondoi), are found frequently during this period. The spotted alfalfa aphid (Therioaphis maculata) has generally been described as a pest during hot, dry weather. In Oklahoma, however, this species tends to be most abundant during fall, winter and spring when the weather is mild and dry.

The pea aphid is the largest of the three species and is typically light green in color. This insect congregates on alfalfa stems and terminal buds and seldom feeds in large numbers on leaves. Blue alfalfa aphids are somewhat smaller than pea aphids and possess a darker green or blue-green coloration. A microscope or magnifying glass (10X) may be needed to separate the two species by examining the antennae. Antennae of pea aphids are light in color with a dark band at the end of each segment or section. By comparison, antennae of blue aphids are light-colored near the base, but become gradually darker near the tip (Figure 1). Like pea aphids, blue aphids prefer to feed on stems, but have a greater tendency to crowd onto leaves that are unfolding from terminal buds. 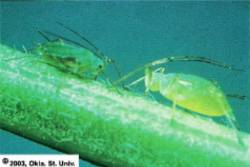 The spotted alfalfa aphid is much smaller than the other species and has light green to tan coloration. Using a magnifying glass, several rows of dark spots can be seen on the back of this aphid (Figure 2). This species prefers to feed on leaves in the lower portions of the plant canopy. As damage to the lower leaves increases, the aphids move onto leaves in the middle and upper parts of the plants. 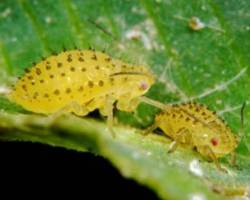 All of these aphid pests feed with piercing-sucking mouthparts and remove fluid from alfalfa plants. When heavy aphid infestations are present, growth of plants is stunted and foliage becomes chlorotic and wilted. Comparing damage by the three species, the pea aphid is least likely to cause mortality of plants, because its feeding does not induce a severe toxic response in alfalfa. The toxic reaction to feeding of the blue aphid causes deformation of leaves near the plant terminals followed by stunting and death of plants when high population densities occur without proper control measures. This difference in reaction of alfalfa to feeding of the aphids stresses the importance of accurate species identification and timely control applications.

The spotted alfalfa aphid has the greatest damage potential of the three species. This aphid causes a severe toxic reaction in susceptible alfalfa that often results in discoloration (yellowing) along veins of leaves near the plant terminals. This characteristic symptom is called ‘veinbanding’. Heavily infested plants turn yellow and some leaves often have reddish discoloration. Foliage and entire plants may be killed quite rapidly. Damage in new seedings during fall and winter may be especially severe due to susceptibility of small plants.

Aphid populations in alfalfa may be sampled either by using a sweep net or by pulling stems and estimating numbers per stem. The stem sampling method is likely to provide a more accurate estimate of aphid numbers. Sampling should be conducted at least once per week after emergence of new seedings or during the growth of the first crop in established stands, as numbers of aphids may increase rapidly during periods of optimal weather conditions. Sampling should not be conducted within 24 hours following hard rains or high winds as most aphids will not be on plants and an accurate estimate of population density cannot be obtained.

For sweep sampling, use a 15-inch diameter sweep net with a heavy muslin bag. Sample at a minimum of five locations in each field, taking 20 sweeps at each location. Identify the aphid species and make a careful estimate of the numbers collected. Also, count predators such as lady beetles (adults and larvae) and aphid lions. Refer to numbers of aphids per sweep in Table 1 for treatment guidelines. If aphid numbers have not yet exceeded the economic threshold and number of predators exceed five to 10 per sweep, populations may be kept under control without spraying.

When using the stem sampling method, select 30 stems at random from the field and place them in a container (preferably white in color). If the field is larger than 20 acres, additional sets of 30 stems should be taken. Shake aphids from the stems into the container and carefully estimate the number collected. Divide by the stem number to calculate the average per stem. Measure ten stems to determine the average plant height. Refer to Table 1 for treatment guidelines.

Weather conditions have a great effect on the likelihood of aphid outbreaks. As stated in this fact sheet, both the pea aphid and blue alfalfa aphid require relatively cool temperatures (below 80 to 85 F) with high humidity and rainfall. Dry weather with mild temperatures increase the chances for damaging infestations of the spotted alfalfa aphid.

Several types of predators aid in limiting aphid numbers in alfalfa. Most important among these are the lady bird beetles, aphid lions, and damsel bugs. During mid-summer spotted alfalfa aphid populations may be suppressed by beneficial organisms. A limiting factor on the value of predators is that aphid numbers often increase much more rapidly than predator numbers in early spring.

Cultivar evaluation is conducted regularly in Oklahoma to determine which alfalfa is best suited for production in the state. In addition to evaluating the climatic adaptation for this region, levels of pest resistance are also rated. Host plant resistance is one of the most effective ways to prevent severe loss in alfalfa from aphids. Cultivars having the best performance in these evaluations over the last several years are being updated online. Resistance to aphids greatly reduces chances of serious damage and limits the need for chemical insecticides. The investment in seed of an aphidresistant cultivar is one of the most important expenditures made by an alfalfa grower. However, fields planted to resistant cultivars should still be sampled for aphids, and if populations exceed economic threshold levels, sprays should be applied.

It may be possible to control aphids by harvesting when infestations occur at early bud stage or later. Harvesting is particularly effective when followed by hot, dry weather. It is important to sample for aphids in regrowth whenever large numbers are present at harvest time to be certain that adequate control has been obtained. Although it has been proven that occasional early harvesting is not damaging to alfalfa stands, consistently cutting prior to first bloom is not recommended.

Throughout the year chemical insecticides play a vital role in an integrated control program. General recommendations should be followed to achieve optimum control with insecticides. These guidelines include: apply chemicals at proper gallonage (at least 10 gallons/acre by ground and 2 gallons/acre by air), do not apply insecticides when temperatures are below 50 degrees Fahrenheit and/or wind velocity exceeds 8-10 mph. In addition, pay close attention to products used per cutting and alternate modes of action to reduce the chance of resistance. Follow label recommendations. Specific insecticide recommendations may be obtained in OSU Fact Sheet EPP-7150 .