Agritourism is becoming more common in Oklahoma, as farmers and ranchers look for alternative income sources and nonfarmers seek out business opportunities in rural areas. Agritourism is the intersection of agriculture and tourism. It refers to activities for visitors at agricultural operations, whether or not that operation is part of a large, traditional farm or ranch or is a stand-alone business. Agritourism includes wineries, farm stays, farm tours, corn mazes, u-picks and trail rides, to name a few activities and experiences. By tapping into the market for tourism and catering to visitors, agritourism businesses can be a significant source of income for residents in rural areas.

There is an enormous variety of agritourism businesses, and every operation is different. These differences can be characterized by the style and variety of products marketed by the business, seasonality in visitation and operation, whether the business is linked to an existing agricultural enterprise, and so on. To examine agritourism businesses in Oklahoma, four basic operation types are classified as: lodges, commodity-based, experiences and wineries. In Oklahoma, about an equal percentage of agritourism businesses are classified as lodging (32 percent) and commodity-based (31 percent) operations, while about one-in-four are market experiences (24 percent), with the remainder made up of wineries (13 percent).

Commodity-based agritourism businesses typically sell products on-site to visitors. These types of businesses include pumpkin picking and other u-pick operations such as fruits, vegetables, Christmas trees, nursery products and local, naturally-sourced manufactured goods. The business may operate year-round or seasonally.

Agritourism businesses can provide fun and exciting opportunities to experience the outdoors, life on the farm and rural history. Experiences include trail riding, corn mazes, farm tours and museums. These types of businesses tend to operate year round or, if seasonal, are attached to an existing farm or ranch business.

Oklahoma has a small but vibrant wine industry. Vineyards and wineries can be found across the state. Oklahoma wineries produce wine from grapes grown in vineyards on-site, brought in from other locations or a combination of both.

In fall 2014, the Department of Agricultural Economics at Oklahoma State University (OSU) partnered with the Oklahoma Department of Agriculture, Food and Forestry (ODAFF) to launch the Oklahoma Agritourism Producers Survey. Its purpose was to learn about the characteristics of agritourism businesses in the state. ODAFF provided OSU researchers with a list of state-registered agritourism operations containing  291 businesses, not including farmers markets. Not all agritourism businesses register with ODAFF, so this list was not exhaustive. Nevertheless, the data gathered by the survey provides useful insights into Oklahoma agritourism as a whole.

The survey was conducted as a mailed questionnaire in January 2015. The 291 businesses were invited to complete an eight-page questionnaire containing five sections that asked about business characteristics, customers, business challenges and future plans, perceptions about a recent agritourism liability limitations law, and owner demographics. By the end of March, 183 businesses had responded to the survey, leading to an overall response rate of 63 percent.

This section presents some of the key results from the survey, summarized by the topic sections in the survey.

Businesses were first asked about their motivations for operating an agritourism business. About 58 percent reported the primary reason was to provide income. The next largest group was motivated by the desire to work outdoors, followed by those with a desire to educate visitors about agriculture and rural heritage. Few businesses indicated that they were continuing the business as part of their family’s legacy.

The survey asked businesses to report their revenue from agritourism within one of eight categories. As shown in Figure 1, the largest number of businesses fit into the smallest revenue category, reportedly making less than $10,000. The next largest group was in the $10,000 to $25,000 range, while the third largest group was in the $50,000 to $100,000 range. Most agritourism businesses have revenues of less than $50,000. These amounts do not take into account operating costs; so the net income of these businesses will be less than the numbers reported here. 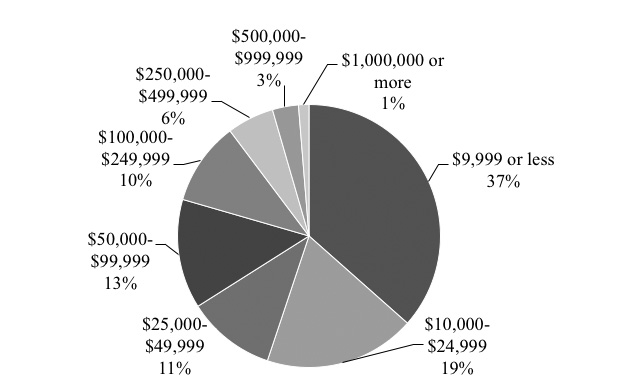 Figure 1. Distribution of business revenue as reported by Oklahoma agritourism businesses in 2014.

Agritourism businesses rely on a mix of full-time and part-time, yearly and seasonal workers. On average, agritourism businesses employ two full-time paid workers for year-round operations and three part-time paid workers for seasonal activities, as shown in Table 1. Businesses supplement the work of paid employees with unpaid workers, which can include family members, friends and neighbors. For instance, an operation may have only a few paid workers but, for one or two days in the year, recruit dozens of volunteers from the community to help with the harvest. Anecdotally, we know that these volunteers are typically local residents and regular customers of the business.

Next, the survey asked about the marketing and promotion methods that businesses used in 2014. Figure 2 shows a significant percentage of businesses indicated they used a website and/or social media. Social media includes a presence in online services such as Facebook and Twitter. Interestingly, a recent on-site survey of Oklahoma agritourism customers showed most visitors learned about the business through word of mouth or social media (Murphy and Melstrom, 2015). This suggests the most effective way of reaching potential visitors online may be through social media rather than through websites. However, the customer survey was limited in scope. Its sample of about 100 customers was gathered during the fall months and did not include lodges, so the results may not hold true for all businesses. 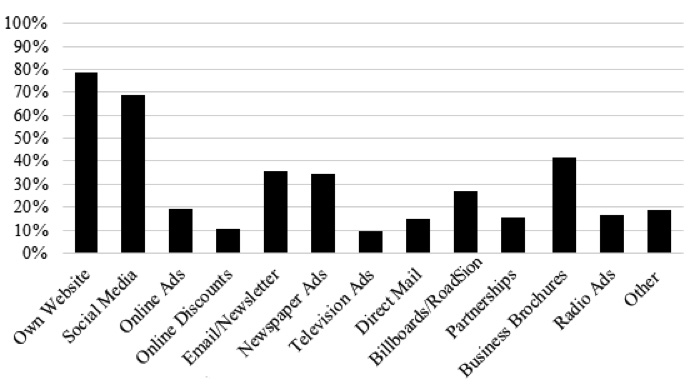 Figure 2. Marketing and promotion methods as reported by Oklahoma agritourism businesses in 2014.

Not surprisingly, agritourists spent the most money at lodges because they were paying for overnight accommodation, compared with visitors to other business types. The largest fraction of agritourism lodge guests stayed only one night, followed by those who spent two nights, while very few guests stayed three nights or longer. Although wineries do not attract as many customers as experience-based businesses, their visitors tend to spend more money. Interestingly, experience-based businesses received the greatest geographic diversity of customers, with about one-third living within 30 miles of the operation, another third living in elsewhere in Oklahoma, one-quarter living elsewhere in the U.S. and the remainder being international tourists.

The survey asked businesses about fourteen different issues they have possibly encountered. Respondents indicated whether the issue had been a serious challenge, moderate challenge, minor challenge, not a challenge or that the issue was not applicable to their business. Figure 3 presents the results for seven issues. Identifying customers and visitor safety was rarely a serious challenge. However, a large portion of businesses reported that weather was a serious challenge. In fact, among all the issues, weather was the greatest challenge to the industry. The survey did not further explore challenges related to weather, such as whether drought, temperature, etc. may be the primary driver. A review of the past century of precipitation data shows, prior to the recent drought, the last 30 years were above average in precipitation for Oklahoma (Figure 4). Most producers in the sample started their business in that period, and so may perceive a relatively wet climate as the norm. However, that period was unique, and as weather patterns move back to the long-term average, producers should prepare for a drier climate. 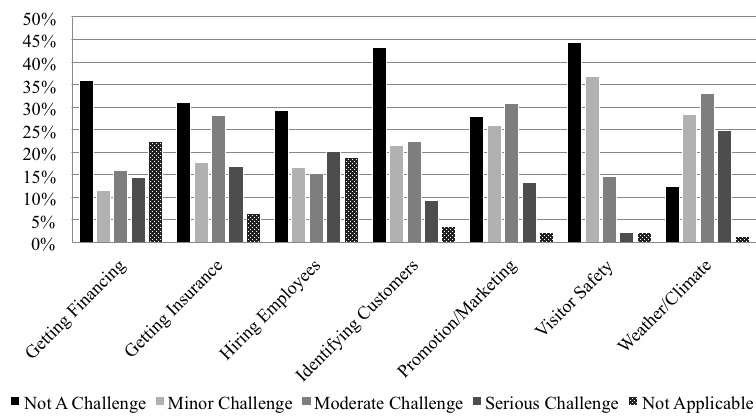 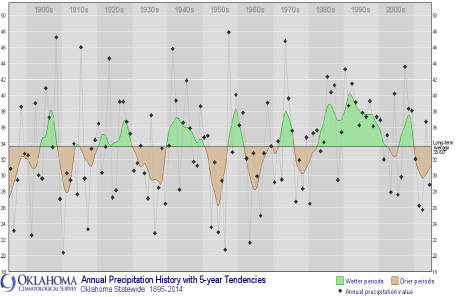 Figure 4. Precipitation patterns during the past 100 years.

The Oklahoma Agritourism Liability Limitations Act is a 2013 state law aimed at limiting the risk of liability to agritourism operators. Specifically, the law says that an agritourism operator who is registered with ODAFF is not liable for the injury or death of a participant, provided a warning label is posted on site and the injury was the result of a risk inherent to the agritourism activity; the liability protection is void if the producer acts in a negligent manner.

With the recent passing of this law, the survey questioned if businesses were aware of its implications and how they might have been impacted. About 77 percent of businesses reported they were aware of the law, and most of these reported registration with ODAFF as a result of the law. When asked about the impacts, the largest proportion of responses was that the business was unsure about the impacts, while the next largest proportion said the law had not effected business. About one out of five businesses indicated they expected to increase the number of visitor attractions at their operation as a result of the law.

Economic Impact of Agritourism in Oklahoma

Economic impact is based on the amount of spending brought into a region associated with an activity, such as agritourism. To determine the economic impact of agritourism in the state, information on the level of visitor expenditures from the producer survey was used. Total spending at Oklahoma agritourism venues was estimated for each of the four categories, as described previously. As shown in Table 3, estimated gross spending in 2014 at the commodity, experiential, lodging and winery venues was roughly $12 million, $10 million, $10 million and $9 million, respectively. These amounts represent visitor spending at venues which otherwise (i.e., without these venues) would not have occurred in Oklahoma. In addition, this direct spending compelled agritourism businesses to purchase inputs (such as labor and materials) that were produced locally, in turn, generating more spending. This additional spending is known as an indirect effect. A third contribution comes from the income earned by agritourism business owners and employees, which is then spent on local goods and services; this is the induced effect. As a result, the total contribution of agritourism to Oklahoma’s economy, summing visitor spending, additional goods and services produced to meet visitors’ demand, and output induced by household consumption, is about $64 million.

The direct spending amounts reported here are higher than comparable figures reported by the Census of Agriculture. From its 2012 census, the National Agricultural Statistics Service (NASS) reports Oklahoma farm receipts of $8 million from agritourism direct sales and $5 million from recreational services. Based on NASS definitions, businesses with agritourism direct sales should correspond closely with the businesses categorized as commodity-based, while those with recreational services should correspond with experiential category. Several reasons could explain why the estimates from this study are several million dollars higher than the 2012 census estimates. First, the census asked farmers directly about sales receipts, whereas the OSU survey asked about visitor expenditures; respondents in the survey may have overstated visitor spending. Second, the census does not report information about businesses classified as nonfarm, while the OSU sampling frame includes all businesses that self-identify with agritourism. Finally, business receipts can vary through time, and the agritourism sector may have grown in the years between the census and the OSU study. Prior to the recession, receipts from direct sales and recreation services were higher in Oklahoma: for example, in 2007 Oklahoma farm receipts from direct sales totaled $12 million, which corresponds closely to the OSU (post-recession) estimate for agritourism businesses with commodity sales.

Residents of both rural and urban communities are increasingly looking for opportunities to experience the outdoors and agricultural heritage. This demand presents farms, ranches and rural communities new economic opportunities. Agritourism can be an alternative source of revenue for existing farms and ranches, and a promising enterprise to non-farm, rural residents. Agritourism also provides an important public service, by educating people about agriculture, food production and natural resources.

Overall, agritourism is an important part of the state’s economy. With about 400 agritourism operations in the state and several thousand visitors per year to the average business, there are more than two million agritourism visits per year. This translates into tens of millions of dollars in business revenue, and millions more in non-local dollars through spending at gas stations, restaurants and gift shops by agritourism visitors.