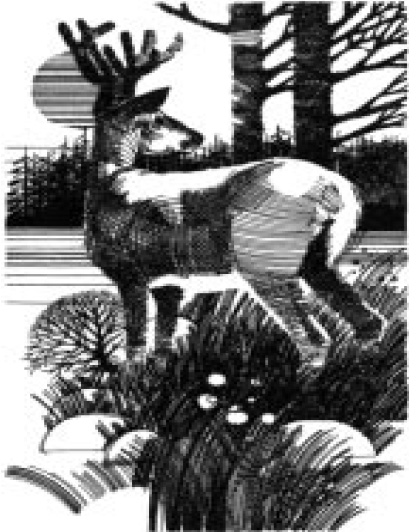 throughout Oklahoma and much of the United States. They have been referred to as an edge species, but actually prefer an interspersion of several different habitat types in varying stages of early to late succession. In forested habitats a general rule of thumb for optimal deer habitat is 1/3 of the area in mature forests, 1/3 of the area in mature forests, 1/3 of the area in early succession (including pastures), and 1/3 of the area in brushy vegetation or regeneration. On rangelands in central and western Oklahoma optimum habitat should be 40 percent brushy cover interspersed with 60 percent open areas. Deer generally prosper following timber harvest, brush control, fire or other form of disturbance that moves advanced successional stages back to early seral stages, providing new growth of vegetation within easy reach.

Deer are primarily browsers (i.e., they eat woody twigs and leaves) but they also feed upon a variety of grasses, sedges, forbs (broad-leaved herbaceous plants), hard mast (acorns, sumac seed, etc.), succulent fruit, and fungi. Deer are selective feeders and will choose high quality diet if a variety of plants are available. In a given area, deer generally feed on more than 100 species of different plants. Woody browse is important and makes up the majority of the diet in most seasons. Forbs are used most in spring and early summer. In fall and winter, hard mast is important and preferred when available. Evergreen browse (primarily greenbriar) and other woody browse are also important. Sedges and low panicums can be important in the winter, particularly in years of mast failure. Agricultural crops such as wheat, rye, or soybeans also provide an important part of deer diets in many areas of Oklahoma. Introduced pasture such as Bermuda grass and Old World bluestem provide little food value to deer and if intensively managed as pasture, can be detrimental to white-tailed deer.

Deer prefer fertilized, burned, or induced sprout growth because of improved nutrition and palatability. They require 6 to 8 pounds of green food per 100 pounds of body mass daily. Abundance and quality of late summer-fall foods govern the reproductive condition of deer. An increase in stored body fat by deer results in increased probability of surviving winter conditions with higher reproductive rates and lower spring fawn mortality. Management strategies that maximize a variety of both herbaceous and woody plants are best. Food diversity is one key to good deer management.

Deer require screening, bedding, loafing, escape, and thermal cover. Deer can use a variety of habitat types or successional stages to meet cover requirements, so long as it conceals the animal. At least 3 dispersed core areas of permanent thick brushy cover of about 4 acres each should be provided per 150 acres. These areas may be linear (as in upland prairie drainages) or in various other shapes. Shape is less important than simply providing permanent cover. Core areas of permanent cover may be burned periodically, but at least 1 core cover area should be left unburned when burning a given area.

During spring and summer, deer are found in a variety of areas that provide interspersed food and cover. They tend to use upland drainages and riparian areas adjacent to feeding areas. Shade provided by creek bottoms becomes more important in summer. Occasionally, they may use shelter belts. Plum thickets, sumac thickets, regeneration areas (sapling stage), thinned stands with resprouting hardwoods and residual logging slash, shin oak motts, and cedar thickets all provide excellent cover when interspersed with other habitat components.

Frequently, the edges of native prairie or hay meadows, along with old fields are used by does for fawning cover. Because fawning occurs in May and June in Oklahoma, hay meadows should be mowed after that time to avoid killing fawns.

Often, simply leaving wooded areas between cultivated fields and pastures interconnected with larger blocks of timber, or stringers of timber, or brush in prairie draws will make other habitats available. These cover strips, if wide enough to conceal deer, can often provide travel corridors. They also provide screening and loafing cover.

Compared to livestock, deer can go for extended periods without water, as long as succulent plants are available. The amount of water required varies seasonally, with summer requiring the most and winter the least. Water is required daily for does that are lactating. A minimum of 4 permanent water sources per square mile are recommended. Lack of free standing water such as ponds or perennial streams may keep deer from using parts of otherwise suitable range.

Space requirements for deer vary greatly, and depend to some extent on available food and habitat interspersion. Home ranges of does vary from 60 to 300 acres annually on good range, to greater than 2,000 acres on low fertility soils with a closed forest canopy. Several factors decrease usable space for deer. These include establishment of extensive monotypic plantings such as crops, Bermuda grass and other introduced pasture, and pine plantations (until canopy closure and in mid-rotation). Others include extensive brush or timber clearing, urbanization, and water impoundments.

Deer herds may become overpopulated and quickly exceed carrying capacity of available food supplies if either-sex hunting is not implemented. Overpopulation may result in disease and parasite outbreaks that reduce the herd and damage the habitat. When deer reach high numbers, an increase in crop and seedling damage may result. POpulation management can equal or exceed habitat management in importance. Landowners should contact Oklahoma Department of Wildlife Conservation about the Deer Management Assistance Program for additional information or help in managing their deer herds, or OSU Wildlife Extension.

As a basic guideline, stands of 40 acres or more should be established in pine and hardwood types. However, recent research indicates that larger stands may be more important for other species. In areas of large blocks of timber or where surrounding land use precludes larger stands, stands as small as 10 acres may be used. In areas of high deer populations, hardwood stands must be at least 30 acres so that deer do not hedge or delay establishment of reproduction.

Sawtimber rotations should be used with intensive management for both pine and hardwood types. Shorter rotations provide abundant browse, herbage, and fruit at more frequent intervals, but hard mast from trees may be eliminated unless clumps of hardwoods are retained through shorter (less than 70 years) cutting cycles.

Areas that are clear-cut should generally exceed 40 acres (especially to meet the habitat requirements of area-sensitive song birds) and should be irregular or linear in shape, along contours, and well dispersed.

Even-aged practices such as seed tree, shelterwood, or clear cut harvesting are all appropriate for deer management. They are preferable to uneven-aged practices in pine stands. Uneven-aged practices such as selective cutting and group selection are of particular benefit in hardwood stands. However, managers should be sure that the application of selective management strategies are not simply high-grading of the stand. Diameter limit cuts work well in theory but in practice amount to high-grading of stands. Stands regenerated in elongated or irregular shapes tend to maximize habitat interspersion and provide more food at less distance from cover. Pine seedlings should be planted at least 10 feet apart to maintain forage production longer and possibly eliminate the need for pre-commercial thinning. When longer rotations are used (more than 50 years) in pine types, a hardwood component within the stand should be retained for future mast production and for other species of wildlife. There is no justification for retaining red oaks over white oaks within a given stand.

Following regeneration on good sites, forage yields peak at 2 to 3 years after the harvest cut and then decline for the next 5 to 6 years or until canopy closure occurs. On poor sites, forage production peaks in 3 to 5 years then declines after canopy closure. After canopy closure, forage yields decline to less than 100 pounds per acre on poor sites and generally less than 300 pounds per acre on good sites unless thinning and prescribed burning treatments are applied.

Pine and hardwood stands should be pre-commercially thinned to regulate stocking density and species composition and to prolong the benefits of regeneration.

Direct Improvements to the Habitat

Direct habitat improvements such as planting food plots should not be viewed as a "cure-all." Planted openings rarely compensate for yearly and seasonal fluctuations in food supply. Their value is limited to winter time in areas where extensive closed-canopy forests prevail and other openings are lacking. Here, direct improvements can lower winter mortality of deer. Cool season forages such as wheat, rye, barley, and rye grass do well in food plots for deer when mixed with Ladino or Arrowleaf clover. Managers who are considering a summer forage planting should use cowpeas, soybeans, or mungbeans in combination with alfalfa to provide some variety. Legumes, other than alfalfa, do not fair well in central and western Oklahoma.

In forested areas, man-made openings such as log landings, unused logging roads, and skid trails should be planted with clover, legumes, and annual or perennial rye. Using serecia or bicolor lespedeza is not recommended. In the absence of openings, managers should consider creating openings at a minimum rate of 10 to 12 acres per square mile of mature.

If necessary, cover should be established across the property. Blocks of cover should be connected to other blocks of cover by timbered or rushy travel corridors. Brush-hogging, mowing, or discing small areas in open fields helps to maintain early stages of plant succession. However, brushy cover should be allowed to develop at forest edges or in drainages. Core areas should be protected from fire. Additionally, managers should remember not to mow or bush-hog during fawning season.

Other Species that Benefit from Deer Management

Numerous other game and non-game species with similar habitat requirements benefit from deer management. Rather than focusing solely on deer, management plans should emphasize the communities of which deer are a part.

U.S. Forest Service, Wildlife Habitat Management Handbook and Service Foresters Handbook, and Stewardship Wildlife Notes from North Carolina Cooperative Extension Service were used as a basis for some of the material contained in the publication. When available or different, Oklahoma-based research information was used.

Sightings of large mammals can bring joy and excitement, but their presence may carry some risks. How local residents perceive these risks can impact their tolerance of black bears.

This Extension circular describes a systematic approach to managing land for white-tailed deer.