Apex (pl. apices): the tip
Cauline: Of, on, or pertaining to the stem
Dentate: toothed along the margin, the teeth directed outward rather than forward.
Glabrous: lacking hair
Lanceolate: lance-shaped; much longer than wide, with the widest point below the middle.
Oblanceolate: inversely lanceolate, with the attachment at the narrower end.
Orbicular: approximately circular in outline.
Pedicel: the stalk of a single flower
Pinnate: resembling a feather, as in a compound leaf with leaflets arranged on opposite sides of an elongated axis
Pubescence: hairiness
Raceme: an unbranched, elongated inflorescence with flowers maturing from the bottom upwards
Rachis: the main stem
Silicle: fruit (less than twice as long as broad)
Silique: fruit (more than twice as long as broad)
Spatulate: like a spatula in shape
Stellate: star-shaped

The vegetative phase of winter canola is particularly sensitive to weed competition as plants take time to produce a canopy that is dense enough to shade out competing weeds. For winter canola, the four leaf to six leaf stage has been identified as the most critical period to control weeds (Aghaalikhani and Yaghoobi 2008). If weeds are not controlled during this time or emerge after the window, significant canola yield loss can be expected. One of the first steps in managing a weed in any cropping system is identification. This fact sheet describes how to identify several economically important mustards that often appear in Oklahoma canola cropping systems. Common herbicides and their efficacy on each species are also described in Table 1.

Common name: smallseed falseflax
Description: Smallseed falseflax is an annual or winter annual mustard. Leaves clasp the stem, are 1 to 3 inches long and have rough surfaces covered with hairs. Stems are also typically pubescent, especially the lower part of the stem. Racemes elongate with maturity and are 2 to 12 inches long. Fruits consist of pear-shaped pods about 0.25 inch long and are borne on a stalk about 0.5 inch long (Figure 1). 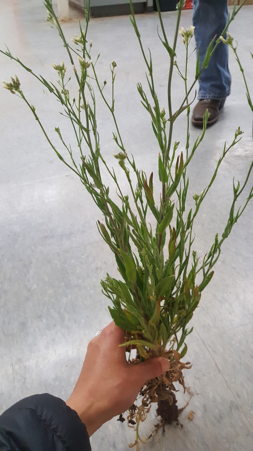 Figure 1. Plant profile of smallseed falseflax. Note the leaves that clasp the stem. Bottom photo: Close-up of the reproductive structure. Note the pear-like structures as compared to the traditional fruits of other mustard species.

Common name: shepherd’s-purse
Description: Shepherd’s-purse is a winter annual or biennial mustard that can reach up to 1.5 feet tall. Flowering is initiated in the spring and can persist until early summer, depending on weather. Flowers are green or white, very small and difficult to see to the untrained eye. During the first growing season, it appears as a prostrate rosette with deeply lobed leaves and is 2 to 5 inches long and ½ to 2 inches wide (Figure 2). Siliques are distinctly heart-shaped, conspicuously divided into two compartments (Figure 3). The fruit shape is very helpful in distinguishing this species from other similar plants. 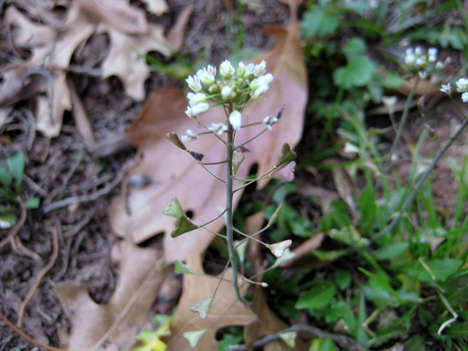 Common name: tansymustard
Description: Tansymustard is a winter annual member of the mustard family. Flowering begins in March and continues through August. Flowering plants are typically 1 to 3 feet tall. Tansymustard flowers are bright yellow (sometimes whitish) in coloration. Leaves alternate along the stem and often are conspicuously bipinnate, with primary lobes of leaves also being lobed (Figures 4 and 5). Leaves often appear grayish with a dense stellate pubescence. The root system consists of a single taproot with finer, branching fibrous roots. Siliques are ¼ to ½ inch long and less than 1/10 inch wide, with two cells per fruit, each filled with tiny seeds ( about 1/10 inch long). Silique size is the most effective method of determining tansymustard from similar species, namely flixweed (Figure 6). 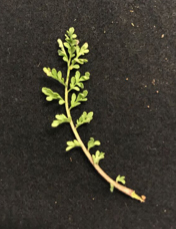 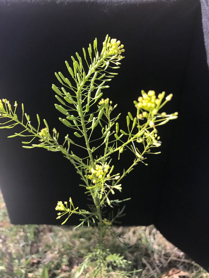 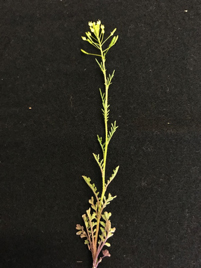 Common name: flixweed
Description: Flixweed is a winter or summer annual or biennial mustard that flowers from July to August. Superficially, this species looks very similar to tansymustard in terms of size and color. The upper portion of the stem is densely pubescent, with the lower stem characterized as having stellate hairs. Size of leaf lobes is also characteristic of this species. Leaves of flixweed are more finely lobed than those of tansymustard, which have more conspicuously rounded lobes (Figures 7 and 8). Siliques are more elongated than those of tansy mustard, being approximately ½ to ¾ inches long and often are less than 1/10 inch in width (Figure 8). 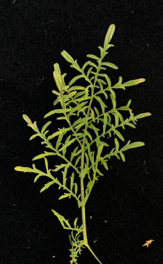 Figure 8. The reproductive structure of flixweed. Note the long siliques. 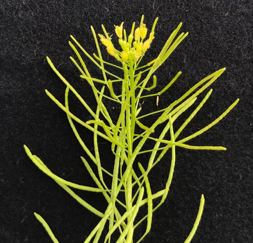 Figure 9. Close-up of the elongated siliques of the flixweed. 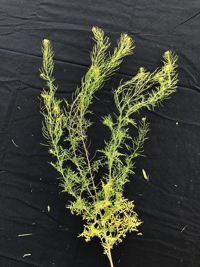 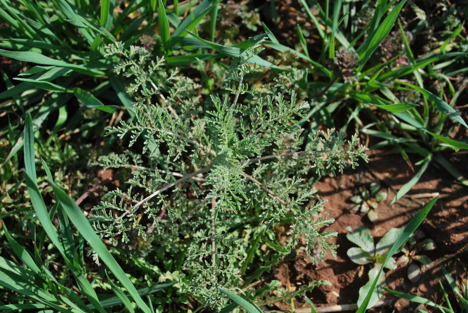 Common name: bushy wallflower
Description: A winter annual mustard, bushy wallflower flowers from May through July and can grow up to 2 feet in height. Seedlings have spoon-shaped cotyledons, which are notched at the leaf apex. Leaves are alternate. Leaf blades are linear to lanceolate with coarsely dentate margins, especially in basal leaves. Upper leaves are often more entire (smooth margins) in leaf margins (Figures 12 and 13). Leaf surfaces are covered by two- and three-forked hairs. The root system of bushy wallflower is characterized by a single shallow taproot. The flowers are a bright yellow, with four petals, and often spread at right angles to the rachis. Siliques are 2 to 5 inches long, giving the plant a densely branched look (Figures 14 and 15). The slender siliques are about 2 to 4 ½ inches long and less than 1/10 inch in width. 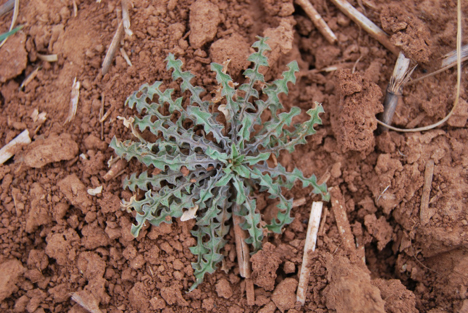 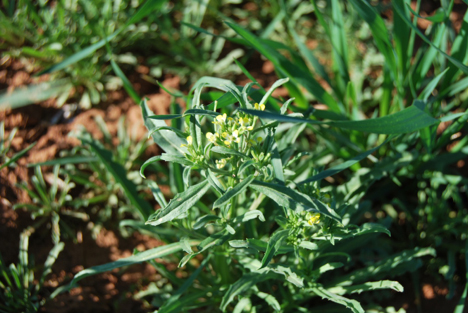 Figure 13. Bushy wallflower at an early reproductive stage. Note the lanceolate leaves with the smoother margins on the upper leaves and the emerging four petal flowers. 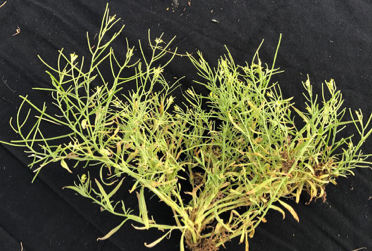 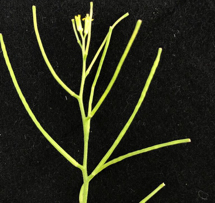 Common name: greenflower pepperweed
Description: Greenflower pepperweed is a common annual weed of many Oklahoma crops. The plant begins its life cycle as a basal rosette approximately ½ inch across. These basal leaves are obovate in shape and the leaf margins are entire to slightly undulate. The root system consists of a stout taproot. Erect flowering stalks emerge from the basal rosette in late spring. These stems are grayish-green in color due to small, fine hairs. The margins of the upper cauline leaves can be entire, undulate or slightly dentate. Each cauline leaf clasps the stem at the base. The erect stems terminate in a raceme of white flowers and silicles will develop soon after (Figure 16). Each silicle is approximately ¼ inch long, flattened, and is divided into two compartments, each containing a single seed. 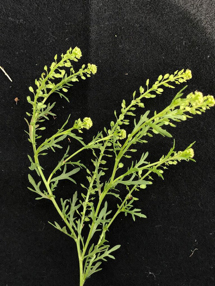 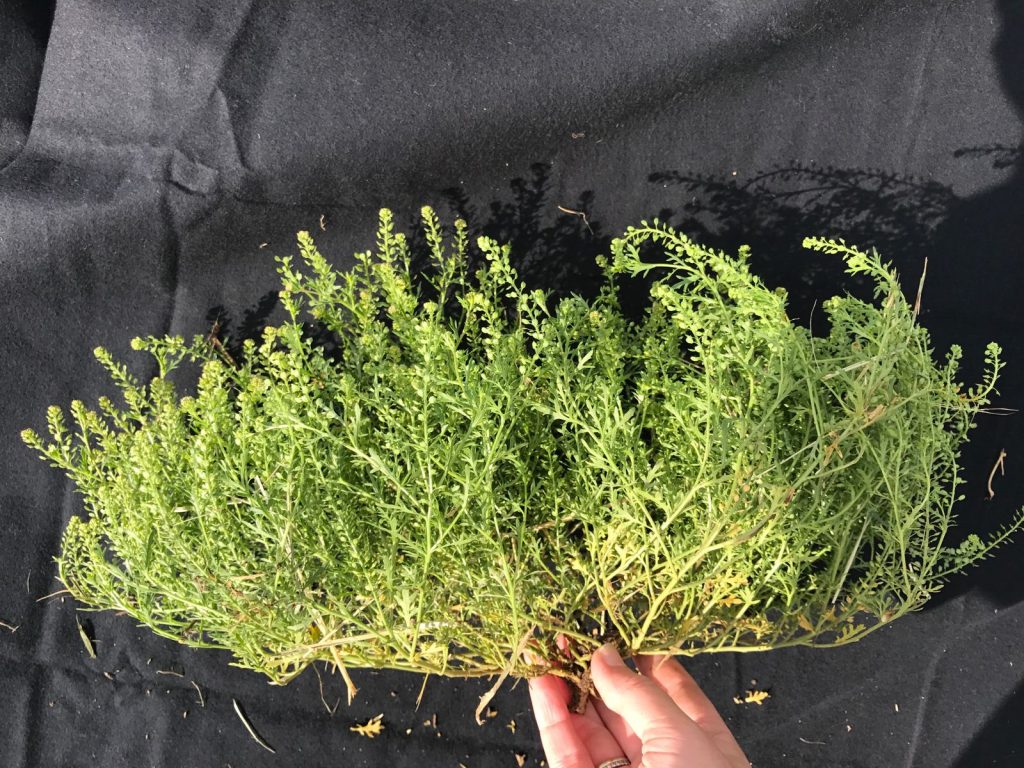 Common name: Virginia pepperweed
Description: Virginia pepperweed is an annual or biennial plant that can reach 20 inches in height. Leaves are alternate, and rosette leaf margins are double-lobed. Mature leaves are toothed to entire and are glabrous. Flowers are small and white. Siliques are 1/6 inch long, orbicular, flattened and notched at the top. 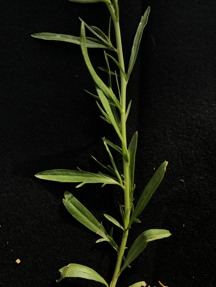 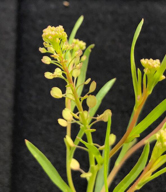 Common name: tumble mustard
Description: Reaching heights of 5 feet, tall tumblemustard is the largest wild member of the mustard family in Oklahoma. Most often characterized as a winter annual, tall tumblemustard has a single, large taproot making up its root system. Leaves of tall tumblemustard are alternate with large oblanceolate lower leaves and smaller, pinnately lobed upper leaves (Figure 20). Leaf margins are coarsely toothed with sinuses nearly reaching the midrib in lower leaves. Leaf surfaces are densely pubescent, most notable in lower leaves. A single stem emerges from a basal rosette, terminating in multiple branches above. Stems are also covered in dense pubescence. Siliques are linear, between 3 and 6 inches in length and ¼ to ½ inch in width. 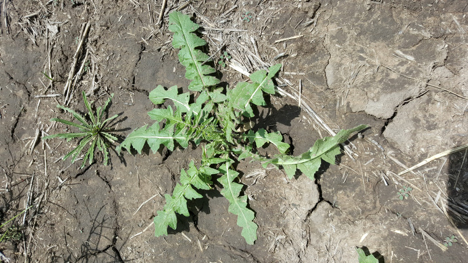 Common name: field pennycress
Description: Field pennycress is a winter annual mustard. Mature plants are typically 1 to 2 feet in height. Like most mustards, the belowground root system consists of a single taproot. Rosette leaves are spatulate-shaped, with rounded or blunt apices and coarsely dentate margins. Upper leaves are more elliptical in shape with coarsely dentate margins and clasping petioles (Figure 21). Flowers have four white, spatulate petals (Figure 22). Fruits are orbicular silicles with winged margins, notched apices and separate into two halves (Figure 23). Each silique is ½ to 1 inch in diameter. Field pennycress is quickly distinguished by a combination of leaf shape and silicle size and shape. 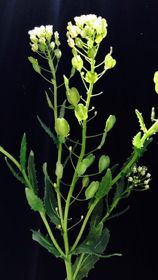 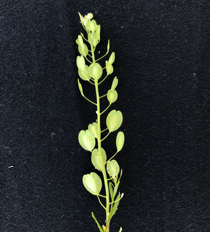 Figure 23. Close-up of field pennycress silicles. Note the wide silicle with the notch at the apex when mature.