Agricultural drought refers to shortages of soil moisture in the root zone during the cropping season because of a lack of precipitation. The water stress due to moisture deficit can cause significant yield losses, especially for crops in sensitive growth stages. The 2011 drought in Oklahoma resulted in an estimated loss of $905 million to the grain and cash crops, and more than $1.6 billion in terms of overall agricultural damages. Agricultural drought can last from a few weeks to months, termed as short-term drought; or from several months to years, termed as long-term drought.

Several weather-based indicators point directly towards an agricultural drought. These indicators include precipitation, air temperature and soil moisture. Converting these indicators mathematically into drought indices creates a tool for monitoring drought conditions. Drought indices are more robust for quantifying the magnitude and duration of drought. In addition, drought indices can be compared across different areas and time spans. This fact sheet provides an overview and examples of how indicators and indices based on soil moisture can be used in tracking agricultural droughts.

Root-zone soil moisture plays a significant role in crop growth, since soil acts as a reservoir to store moisture for plants’ needs. Growers are well aware that plants show immediate symptoms if water is limited for root uptake. Once the root-zone soil moisture is recharged from rain or irrigation, plants resume growth and progress towards maturity. If soil moisture is too depleted for too long, plants may not mature to their potential or may permanently wilt and eventually die. Hence, soil moisture can serve as an indicator of drought-induced water stress. There are several ways in which soil moisture information can be used to track agricultural drought:

The role of soil moisture in determining drought severity has remained fairly limited, mainly due to unavailability of sufficient long-term data. A valuable source of data in Oklahoma is the Mesonet network, with soil moisture sensors at almost every Mesonet site across the state. At most of the sites, four sensors are installed at 2, 4, 10 and 24 inches (5, 10, 25 and 60 centimeters) below the soil surface. Each sensor is individually calibrated to ensure a high level of accuracy. Soil moisture sensors are covered by warm-season grass and broadleaf vegetation, that is dormant in the winter. The 4-inch (10 centimeters) depth is the only depth with sensors under both vegetation and bare soil.

The soil moisture sensor data collected at Mesonet sites are converted into two parameters: Fractional Water Index (FWI) and Plant Available Water (PAW). Each of these parameters and how they can be used in monitoring drought-induced moisture depletion are explained in the following sections. 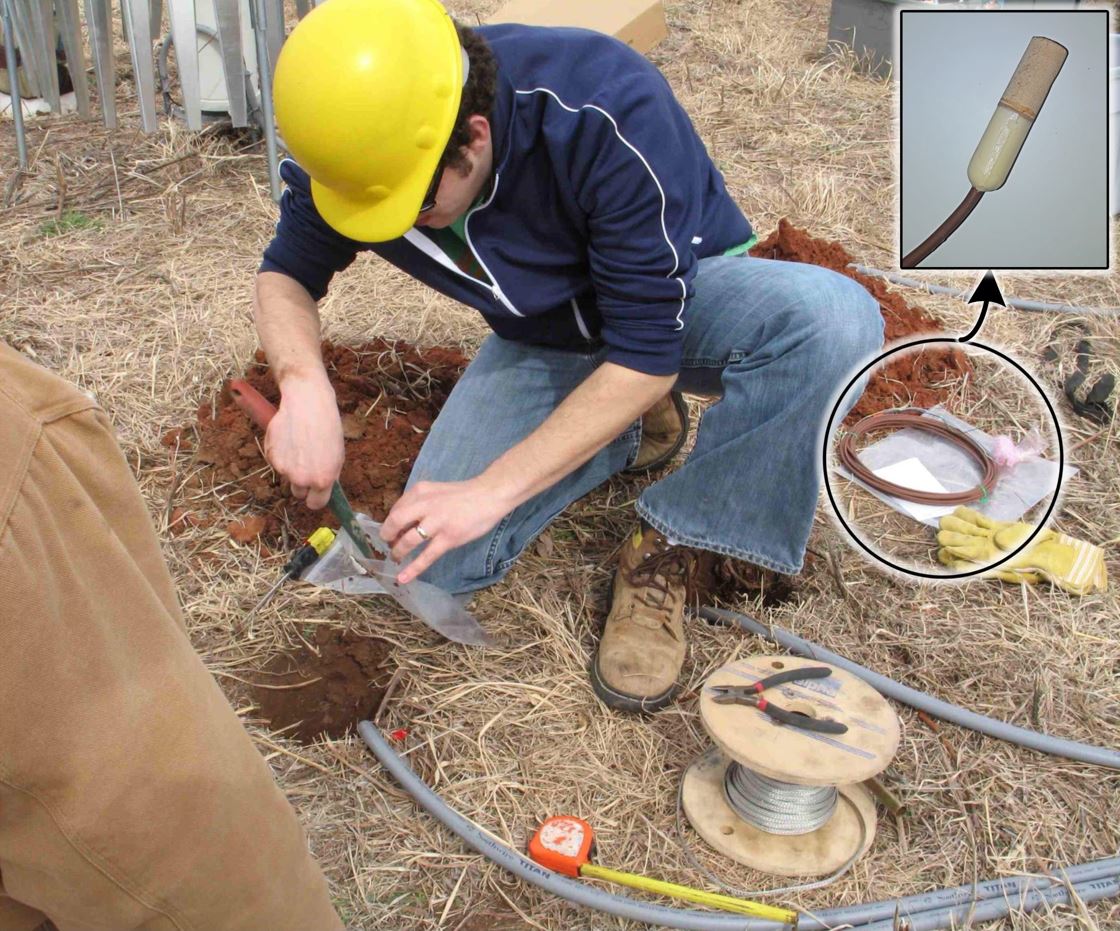 Figure 1. Installation of a soil moisture sensor at a Mesonet site.

FWI is the normalized value of the sensor readings. It represents soil wetness and ranges between zero and unity. Zero represents near wilting point conditions, where root water uptake is minimal and one represents near field capacity where roots have access to ample water.

Statewide FWI maps are available at the Mesonet website (under weather tab > soil moisture). These maps provide a statewide view of soil moisture for unirrigated fields and the most recent day. Maps are updated daily. Maps for all sensors depths and soil covers are available.

In addition to FWI maps, the website offers the ability to graph FWI data for sensors installed at 2, 10 and 24 inches (5, 25 and 60 centimeters) at specific Mesonet sites for the past 90 days. Half-hour data is displayed for one- to seven-day graphs, while graphs of 15 to 90 days use daily data. Once the site and duration are selected, the graph will be displayed. The user can download the graph as an image file or in a spreadsheet format.

Figure 2 demonstrates the FWI graphs of three Mesonet sites as an example. These sites are located near Hollis (southwest), Kingfisher (central) and Wister (east). The first thing that can be noticed by looking at these graphs is the difference in overall FWI among these sites. Hollis has some of the smallest FWI values, Kingfisher is somewhere in the middle and Wister has the largest FWI values. This trend follows the general precipitation trend across the state, with the amount of precipitation decreasing from east to west. The long-term precipitation averages range from a high of 54 inches in the southeast to 17 inches in the western Panhandle.

Valuable information can be obtained about root zone water availability at each site. At Hollis, the shallowest depth (red line, 2 inches or 5 centimeters) was near zero for most of the 90-day period, indicating that soil moisture at this depth was not enough to supply plant demands. The next depth (yellow line, 10 inches or 25 centimeters) was also fairly dry at values less than 0.25. The deepest layer (green line, 24 inches or 60 centimeters) had significantly larger moisture content than the other depths, with values ranging between 0.5 and 0.6 for the majority of the period.

When soil moisture was declining, the graph lines sloped downward from higher to lower FWI values. Water infiltration from rain events typically caused steep inclines in graph lines. At Hollis, a few rain events occurred during the period presented by the graph did not have any impact on FWI below the 5-centimeter depth and the water was soon lost, as the FWI went back to zero within a few days.

At Kingfisher, the largest variation was observed in the uppermost (5 centimeters) depth, ranging from near zero (water stress) to one (wet). This is mainly because at shallower depths, soil moisture is more prone to direct evaporation, root water uptake and precipitation. The deeper depths have a weaker link to atmospheric events, since the soil above them acts as an environmental buffer.

FWI graphs clearly show wetting and drying times at different soil depths. The infiltration depth of each precipitation event can be evaluated from the FWI graphs at Kingfisher. During the period covered, a rainfall event of 0.55 inches occurred on Feb. 17, 2018. This event recharged the dry top 2 inches (5 centimeters) to near saturation. The deeper depths, however, did not show any response to this event. Another precipitation event of 0.53 inches happened a few days later on Feb. 22, 2018. This time, the water infiltrated further down, because the top soil could not store any additional water. As a result, the 25-centimeter sensor responded with the FWI rising from less than 0.60 to more than 0.90. The 60-centimeter sensor also showed a response, although with a time lag as water moved lower in the soil profile.

After the rain events, FWI decreased as soil started drying up. The rate of decrease in FWI showed the variation in moisture loss among the different depths. The 5-centimeter depth had the most rapid decline, going from near field capacity to near wilting point in a few days. The slope of FWI graph was not as steep at 25- and 60-centimeter depths, indicating slower moisture loss. All depths reached very dry conditions (FWI near 0.1), before a rain event of 1.4 inches happened on April 21, 2018.

In case of Wister, the 25- and 60-centimeter depths were in sufficiently wet conditions (FWI of 0.9 and above) over the graph dates. The 5-centimeter depth was also fairly wet for a good part of the covered period, but had some dry downs in between the rainfalls.
The results from these graphs show that soil profile was almost full at the end of this period at Wister, while Hollis experienced dry conditions. The period covered in the graphs is an important period for the performance of winter wheat and for the establishment of summer crops planted in late April, May or early June.

PAW is the amount of water present within a certain depth of soil which is accessible to plant roots for uptake. This parameter is dependent on soil type and soil water holding capacity. The PAW is calculated by subtracting the wilting point (lower soil moisture limit of plant accessible water) from the existing soil moisture in terms of volumetric water content of soil, and multiplying the difference with the corresponding soil depth:

Maps showing the percentage of PAW with respect to potentially maximum PAW are recommended, as they incorporate the soil-related information of each Mesonet site. In general, many plants will experience stress if the PAW drops below 50 percent. However, the plant resilience against the water shortage may vary depending upon the type of crop. For example, cotton is tolerant to higher water depletions, whereas watermelon could experience a stress with comparatively smaller decreases in PAW. More information on this can be found in fact sheet BAE-1537, Understanding Soil Water Content and Thresholds for Irrigation Management.

It is important to mention that care must be taken when using FWI or PAW parameters for fields that are irrigated, as the values of these parameters indicate the variation in soil moisture under non-irrigated conditions. For irrigated fields, it is recommended that producers install their own soil moisture sensors to capture variations caused by irrigation events. Installing localized soil moisture sensors is also encouraged if the field of interest is substantially distant from a Mesonet site, as rainfall amounts could vary widely over short distances. In addition, basic knowledge of root depth of the crop over time can help with understanding the important sensor depths with relevance to the crop growth stage.

This material is based upon work supported by the Natural Resources Conservation Service, United States Department of Agriculture, under contract number 69-3A75-16-013. Additional support was provided by the Oklahoma Water Resources Center through the U.S. Geological Survey 104(b) grants program.