The Africanized Honey Bee in Oklahoma

The honey bee (Apis mellifera L.) is native to Asia, consists of more than 24 races, and has a historically long association with humans.  It is one of the most intriguing insects to study, given its behavioral characteristics, including a defined division of labor known as eusociality.

Humans benefit from honey bee industriousness in the collection of pollen and nectar. In 2008, their pollination activities on more than 100 agricultural crops accounted for $20 billion in the U.S. alone.  Without the pollen that bees transport, many plants could not produce fruits, vegetables, and seeds. Some of the crops pollinated by bees include apples, watermelons, citrus, and cantaloupes.  Products such as honey, beeswax, bee venom, and royal jelly also have a long history of use by humans.

Approximately one third of our diet depends directly or indirectly on bee pollination.

Honey bees have a complex society with defined roles for each caste: the queen (Figure 1) mates with drones in a nuptial flight and lays several hundred eggs per day.  Her body is considerably more elongated than that of drones or workers, especially during her egg-laying (oviposition) period.  The queen cannot feed herself and needs help from the bees that take care of her. Her life span is one and a half to two years, after which a younger queen is produced within the same hive. The new queen takes over the colony and the old queen either dies, is killed, or is forced to leave.  Worker honey bees (Figure 2) are also females.  They will take care of brood (egg, larvae, and pupae) as young adults and forage for pollen and nectar later in life.  Male honey bees or drones, do not collect pollen or nectar, are noticeably larger than workers, and their only known function is to mate with the queen.  During late spring and summer, there is one queen, fifty to sixty thousand worker bees, and several hundred drones in a colony. 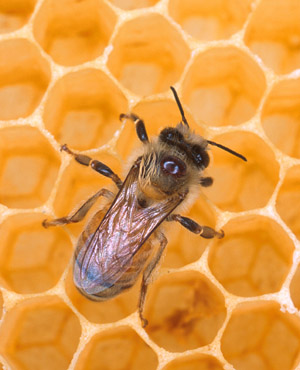 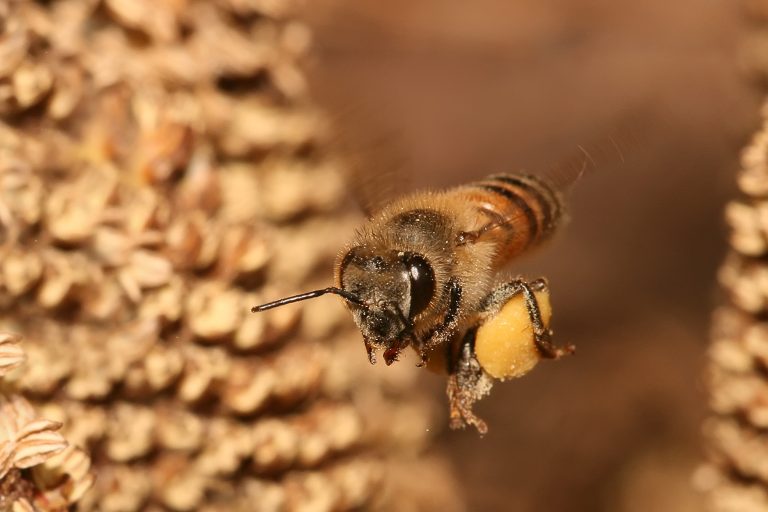 History of the Introduction of the European Honey Bee (EHB) into the U.S. and recent spread of the Africanized Honey Bee (AHB)

In the early 16th century, English and Spanish settlers introduced the European Honey Bee (EHB) into the Americas.  Unknown to native Americans before then, they named it “white man’s fly.”  In 1957, the Brazilian scientist, Warwick Kerr, imported African honey bees (AHB) (Apis mellifera scutellata) to genetically cross with European honey bees with hopes of increasing honey production.  Unfortunately, Africanized honey bees escaped their hives, survived Amazonian tropical conditions, and became widespread throughout South America.  They moved through Central America and Mexico and on October 15, 1990, the first natural swarm was captured in the U.S. in Hidalgo, Texas.  In 1993, further reports of natural swarms occurred in Arizona and New Mexico.  In 1994, AHB was recovered in California and within a year, nearly 8,000 square miles had been colonized by AHB.

Today, several states have reported widespread colonization of AHB including Texas, New Mexico, Arizona, Nevada, and California.  In Oklahoma, 43 counties had confirmed (by DNA) AHB populations (Figure 3).  Figure 4 shows the spread of AHB throughout the U.S. to 2009 (courtesy of USDA ARS). 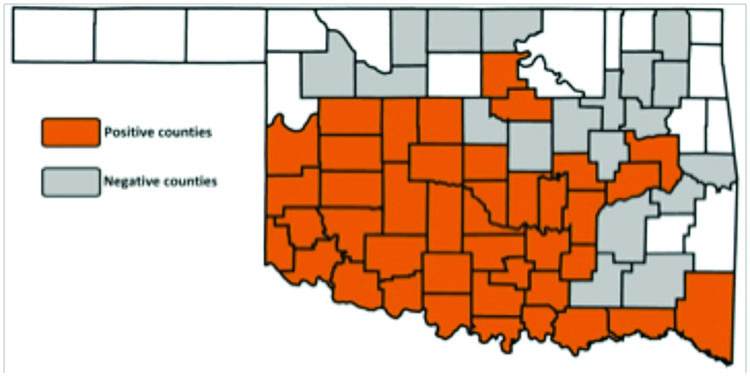 Figure 4. Spread of the Africanized Honey Bees by year (courtesy of USDA).

Similarities and Differences Between AHB and EHB

Similarities between AHB and EHB include:

Differences between the two races include: 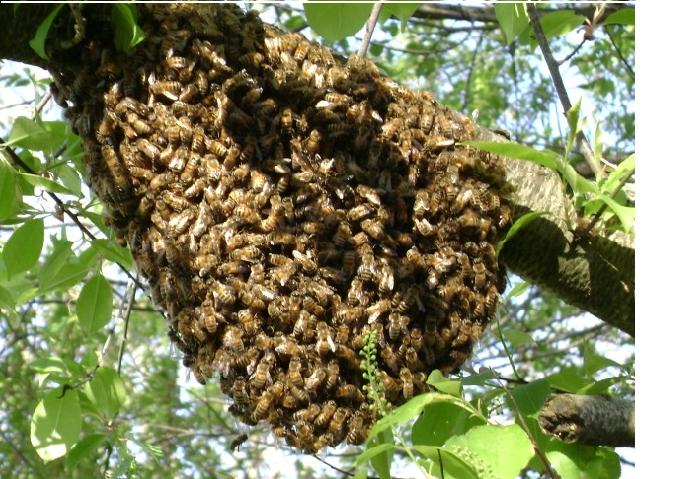 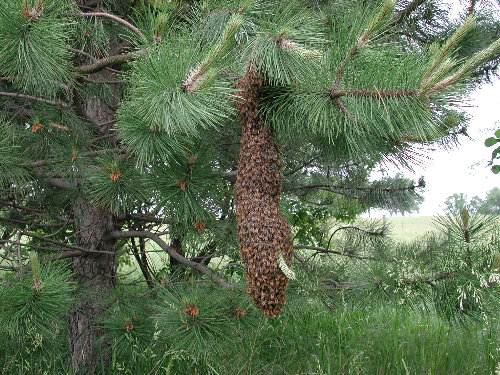 What You Can Do in Preparation

Look for cracks and holes that could be occupied by a colony.  If appropriate measures are taken to screen or caulk holes, or fill cavities with insulation, honey bees will not be able to colonize.  Overhangs and eaves in homes are places honey bees are likely to occupy and appropriate measures to cover them should be taken (Figure 7). 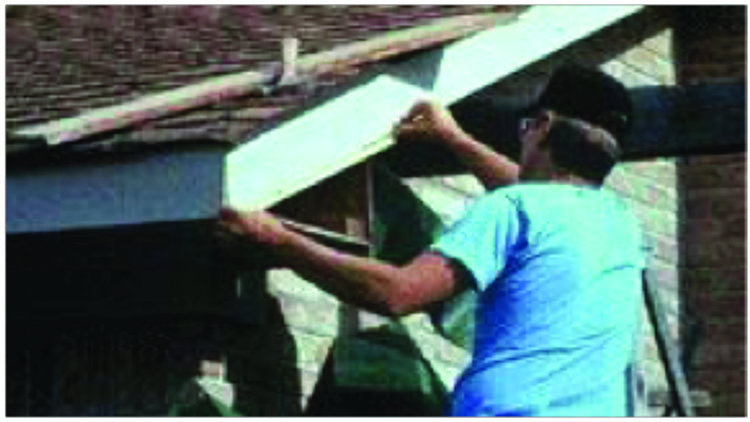 Figure 7. Bee proof the overhang in your home.

If a colony is found in your home, call a pest control operator, beekeepers in your area, or other experts in bee removal that can remove the colony.  A current list of certified pest control operators is provided by the Oklahoma Department of Food, Agriculture and Forestry (http://oda.state.ok.us/cps/beeresponder.pdf).  Do not try to remove colonies yourself, especially if you are not properly equipped.

When involved in outdoor activities, look before disturbing vegetation.  If several bees are coming and going from a single spot, this could potentially indicate there is a nest nearby.  Do not panic if there are a few bees foraging in the flowers.

What if you are stung?

First, get away, run to the shelter of a car or building, and stay there even if some bees come in with you.  Do not jump in water because bees, particularly AHB, will likely stay in the area until you surface.  Once safe, remove stings (Figure 8) from your skin.  It does not matter how you remove them, as long as you remove them quickly to reduce the amount of venom injected. 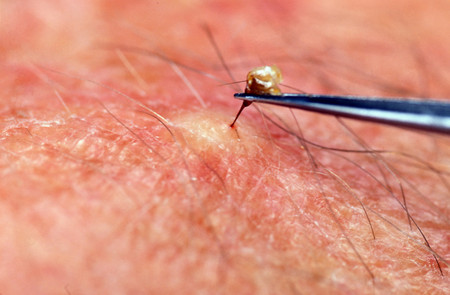 Honey bees can be confused with other bees and wasps from a distance, but there are several morphological differences that can be pointed out easily (Figure 9). 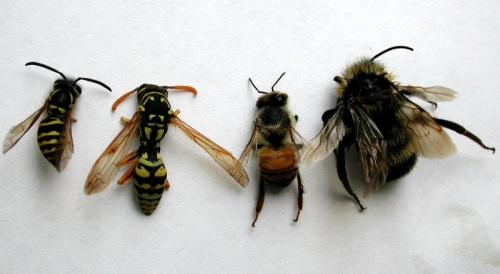 Yellowjackets are a short stocky kind of wasp.  They have a cross-banded black and yellow abdomen.  The abdomen tapers off conically to a sharp point where the stinger is concealed.  They attack quickly when their nest is disturbed, and one yellowjacket can sting repeatedly.

Paper wasps have a very thin waist, long legs and reddish-orange to dark brown, or black in color. They have yellowish markings on the abdomen, narrow cylindrical legs, and no pollen baskets. They build their nests out of paper made from plant fiber or wood.  They prefer to place their nests in hollow trees, in the ground, or beneath the eaves of houses.  Female paper wasps can sting repeatedly.

Honey bees are reddish brown with black bands encircling their abdomen.  They have a subtle striped appearance, and short hairs all over their body – even on their eyes.  They are smaller than bumble bees and have pollen baskets on their hind legs to carry food.  In the hive, they do dances to tell other bees how far to fly for food.  As mentioned earlier, they can sting only once.

Bumble bees are relatively large and have a robust body.  They are yellow and black and have soft, fine hairs. They have pollen baskets on their hind legs to carry food. They build their nests in or near the ground or occasionally use old bird nests.  Females can sting more than once and they do not use dances to communicate with other bees.

Syrphid flies (Figure 10) are black or brown with yellow banded abdomens and superficially resemble bees and wasps.  However, they have only two wings which are not held over the back of the body when at rest. Some species are hairy and have a long, thin abdomen. Antennae are short, not elbowed, and the distal segment bears a strong hair (seta).  These flower flies are harmless as adults, but serve as aphid predators in the larval stage. 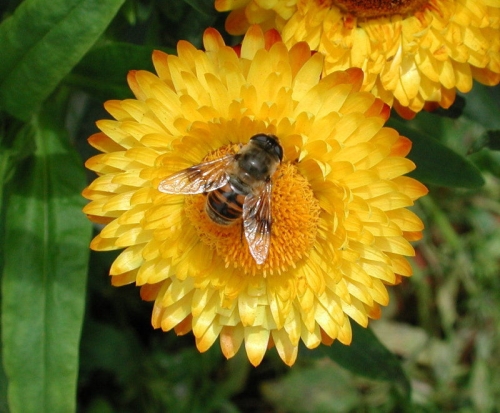 For additional information on honey bees, refer to:

The life cycle of nematodes, how they affect plants and management practices of a variety of nematodes.

A guide to composting with worms, their benefits, and maintenance.

Bees & Beneficial InsectsCompostingGardening & Lawn CareInsects, Pests, and DiseasesWaste Management
VIEW ALL
Back To Top
Back To Top
©