There are 13 chemical elements that come from the soil which all plants need. Only three are commonly deficient in Oklahoma: nitrogen, phosphorus, and potassium. They are sometimes referred to as primary or macronutrients because plants require large amounts of each. Since plants use such large amounts of these three elements, it is natural for soils to “run out” of these nutrients first. We are acquainted with the need to replenish these nutrients by fertilizing in order to maintain productive soils and profitable yield levels.

Of the remaining 10 nutrients, seven are collectively referred to as micronutrients because they are needed in only trace amounts,  and the others are called secondary nutrients. Secondary nutrients are calcium, magnesium, and sulfur.

Researchers at Oklahoma State University have recognized that sulfur would likely be the next nutrient to become deficient in Oklahoma soils. For this reason, and because sulfur fertilizers are often promoted nationally without regard to actual state or local needs, much sulfur research has been done in Oklahoma. Experiments have shown responses to sulfur fertilizer only in certain areas.

Sulfur is taken up by crops primarily as the sulfate anion (S042-). Like nitrogen, sulfur is a relatively mobile nutrient in soils and is stored in the soil organic matter. Unlike nitrogen, sulfur does form slightly soluble inorganic compounds, like gypsum, which are common stored forms of sulfur in arid and semiarid soils. The supply of native sulfur from soils is influenced greatly by organic matter content and annual rainfall. Figure 1 shows the relative tendency for free sulfates, like gypsum, to contribute to crop needs in relation to rainfall.

Soil texture has a strong influence on the amount of sulfur available in soils because of its relationship to leaching. Deficiency has been reported in the deep sandy soils along the north Canadian River even though annual rainfall is too small to promote excessive leaching. On the other hand, because many eastern Oklahoma soils tend to be shallow and poorly drained, sulfur is not readily leached out of them. An exception is the sandy, coastal plains soils in southeastern Oklahoma where sulfur deficiency has been reported.

Significant amounts of sulfur may be added to Oklahoma soils each year from sulfur contained in rainfall, fertilizers, and pesticides, and irrigation water. Conservative  estimates from a research indicate  20 pounds per acre of sulfur are added to soils each year by rainfall in central Oklahoma. The larger amounts are for eastern Oklahoma.

For most production systems in Oklahoma there are at least 10 pounds per acre of sulfur added to the soil each year without specifically using a sulfur fertilizer.

Crops need sulfur in relation to crop yield because sulfur, like nitrogen, is a mobile element in the soil. The tables located on page 3 show sulfur requirements associated with yield goals for common Oklahoma crops. 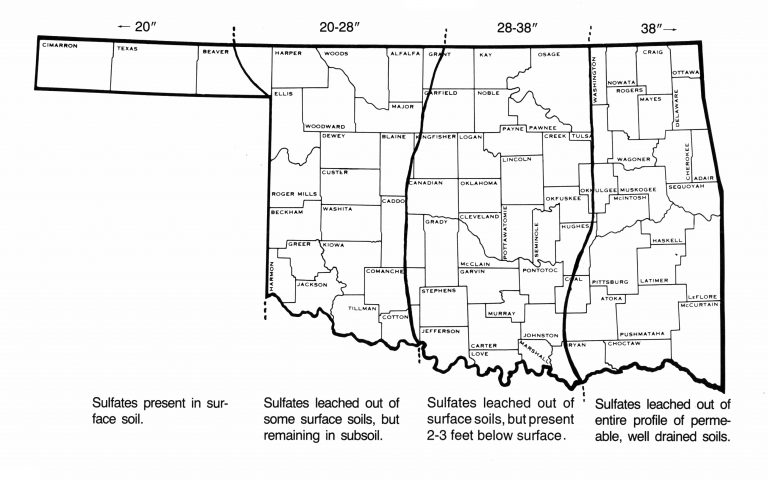 Figure 1. Presence of sulfates in soils in relation to annual rainfall. Although the majority of sulfur compounds have been leached out of surface soils in eastern and central Oklahoma, soluble sulfate anions (SO42-) are present in significant amounts. Soil test for sulfur will indicate if sulfur is deficient.

Some of the common sulfur fertilizers and their sulfur content are provided in the following table.

Learn how to identify, manage and control the invasive horseweed plant and the dangers of not controlling the pest in your winter wheat field.