Homeowners interested in producing their own electrical power have several options from which to choose.  Small wind, solar electric photovoltaic (PV), and even micro-hydroelectric in some cases, are all self generation technologies.  Of these systems, solar PV is probably the simplest to install and operate as it has no moving parts.

The technology behind solar PV systems is somewhat complicated and uses special high-tech materials.  In its simplest form, the solar PV system uses panels that, when exposed to light, produce a voltage and current that can be used as electrical power.

We have seen the increased use of these panels on everything from small calculators to spacecraft to large panels on buildings.  The panels can also be used to supplement the electrical needs of homeowners both in rural and metropolitan areas.  The question becomes:  Should a homeowner invest in this energy technology?

Solar PV systems may be able to achieve some of the above criteria, but may have trouble with others.  Let’s examine what solar PV can and cannot do for the typical Oklahoma homeowner.

In stand-alone systems, the solar PV system is not connected to the utility grid and is the sole source of electrical power.  Because sunlight is not available at all times, the system must either be used sporadically during periods of daylight or with a battery backup system.  Battery systems significantly increase the cost and complexity of the system, but are the only practical way to provide stand-alone solar generated power at night or during cloudy periods.

The system size, or generating capacity – square footage of panels, will need to be large enough to supply the entire load, since it will be the sole energy source. This usually means the system will need to be oversized to some degree.  System sizing is a somewhat involved procedure and is not addressed here.  The stand-alone systems are good candidates for remote, sunny locations that need electrical power.  Examples include: small homes with very little heating or cooling loads, some small, remote irrigation systems, electric fence chargers and telecommunication systems.

The primary cost of a solar PV system is the cost of the panels. Panel cost is dropping slowly, and as of this writing is about $3 to $4 per watt1.  By the time the panels, wiring and mounting hardware are installed, most sources quote about $8 per watt.  Panels for very low prices can be found on the internet; however, these are usually just the panels with no frame and usually come in very large sizes.  Use caution when buying solar panels at very low prices. 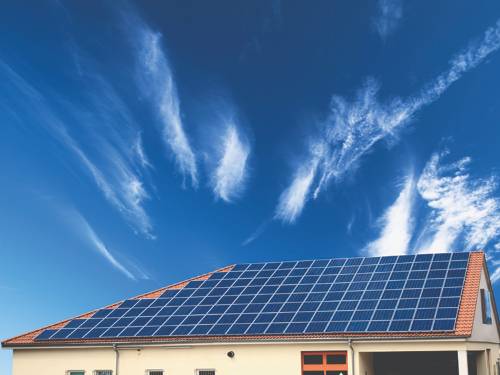 In grid-tie solar PV systems (see Figure 3), solar panels usually provide some percentage of the facility power needs when the sun is shining.  The home or facility is also connected to the utility grid, which provides the main or “backup” power, and the solar PV augments the utility power.  As sun light diminishes at night or in cloudy conditions, the system gradually switches over completely to utility power.  This back and forth load sharing between the solar PV system and the main utility power is done automatically with a special charge controller and inverter that converts the direct current (DC) to utility-compatible alternating current (AC). A special utility meter keeps track of the power used from the grid and produced by the PV system. The solar PV system actually behaves like a positive power appliance in the home.  Instead of using power, the PV system creates power within the home. In most applications, the home still pays the utility; however, the monthly bill is reduced by what the solar PV system contributes.

The home usually employs some type of “net metering” from the utility for the grid-tie system to work.  In this arrangement, the utility meter is allowed to turn backwards if the solar PV system produces more power than the home requires. This simplifies the accounting and the end result is a lower monthly electric bill for most applications. Net metering contracts vary from utility to utility.

Another important aspect of a grid-tie system is that an automatic transfer switch is integrated into the inverter. This ensures that if utility power is interrupted from storm or similar damage, the solar PV system does not back-feed power onto the utility lines, which is a hazard to utility workers.

We purchase a 5,000 Watt solar grid-tie PV system for Oklahoma City2. The system costs $20,000 installed (34 panels).  This system should generate, on average, about 33 kWh per day or about 12,200 kWh per year.  At 9 cents per kWh this is $1,100 worth of electricity at average utility prices. The system cost $20,000 to purchase; therefore, the simple payback would be $20,000 divided by $1,100 per year which is a 18-year payback.  With incentives and depreciation, the initial price might drop up to 50 percent. At half the original purchase price, the payback is about 9 years.

What if we want to compare the costs of installing a stand-alone system on a building several hundred feet from the nearest existing utility line or paying the utility to run a line to the building?  The cost to run utility power lines to our facility might be $20,000.  In this case, the first cost comparison of our stand-alone system ($20,000) is reduced by $20,000. Now the payback is immediate.

In the above example, the payback was somewhat long for locations already having utility power.  However, for a location a few hundred feet from utility power, a 9-year payback might be acceptable (compared to trenching and running power lines).  With incentives and comparing to a high cost to run utility power out to the location, the solar systems could be more economical out-right. For very remote locations, solar and/or wind power may be the only choice other than running a generator, which tends to be much more expensive.

Utility power is often difficult to beat economically, due to economies of scale. For someone trying to save money on the utility bills, the cost of solar power might be unacceptable.  However, for the hobbyist, environmentalist or someone at a remote location, this may not be that great of a motivation hurdle or the economics are better. In the above example, the 5,000 watt solar PV system would eliminate about 16,000 pounds of CO2 in the atmosphere per year from coal powered utilities. This would appeal to environmentally conscious customers and might be an added benefit from any future carbon legislation.

Generally, renewable energy system initial costs continue to decrease and the prices of utility power will increase in time.  Both of these situations lower the payback period for renewable energy systems and make them more attractive.  A definite benefit of a solar PV energy system is, once installed; the energy costs are now relatively set and should not increase other than maintenance. This predictability may also be of value to some customers.

2  This is a hypothetical example using estimated typical system costs at the time of writing (2012). Actual costs and performance will vary. Panels are at a fixed-tilt at latitude plus 15 degrees (50 degrees). Average solar energy available is 5.2 kWh/m2/day (NREL OKC). Average solar panel efficiency is estimated at 12%.

A guide to help provide construction plans for a large-scale, home-use, solar dehydrator for foods and agricultural products.

An explanation of how light can fade items in your home and preventative measures you can take to limit this fading.

A summary of what light pollution is, how it can be harmful and what to do to reduce it.

How light at night may cause sleep problems that can lead to health and other problems later on.